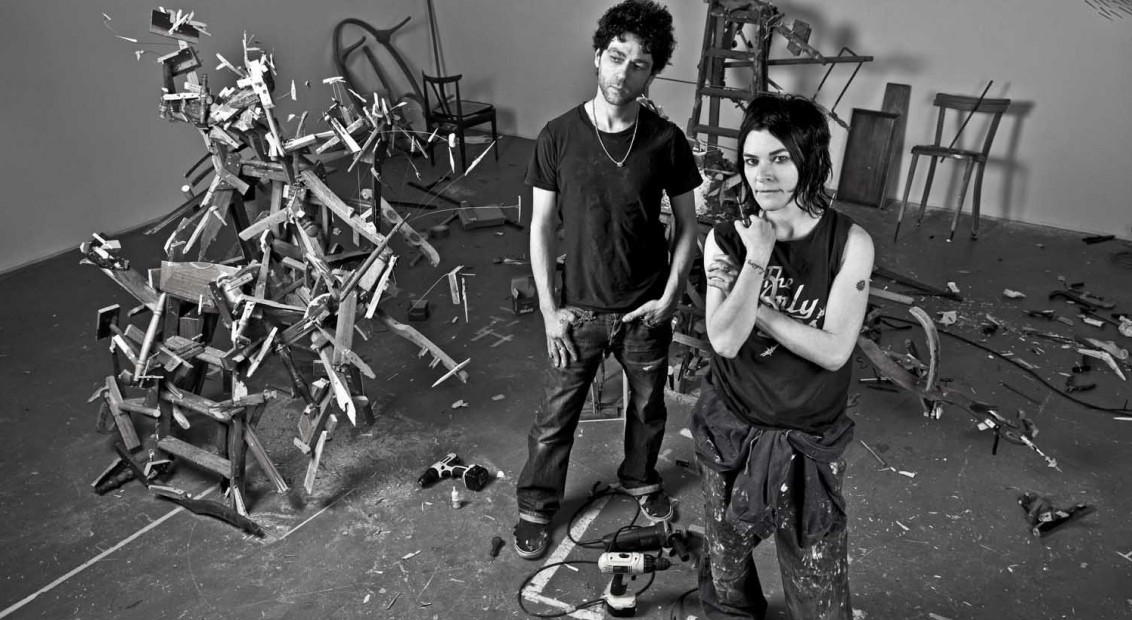 One man’s trash is another’s treasure, so goes the famous adage. London based artist duo Tim Noble and Sue Webster (dubbed the “enfants terrible of contemporary art”) would no doubt nod in agreement, after all, turning waste into artwork is something they’ve built their reputation on.

By delicately arranging piles of rubbish – road kill, food, cigarette packets, scrap metal. You name it, it’s in there – they create sculptures that come to life by beams of light, creating projected shadows, predominantly self-portraits, once hidden in conventional lighting. This unique metamorphosis fuses opposites in a manner totally unique and utterly showstopping as the tangible unwanted becomes resurrected as sentimentalised artwork.

Having first met at Nottingham Polytechnic in 1986, and moved to London in the early Nineties Noble and Webster have carved out their own path, one uncompromising and individual to the core, expanding their DIY ethos through multiple artistic channels, from neon light installations to monoprints and bronze castings.

Here, the art duo curate a playlist of tracks that inspired them and set them on their path, after all, for this music inflicted pair the two mediums come hand in hand – they have previously directed music videos for the likes of Fat White Family, S.C.U.M. and collaborated with Bo Ningen. From Tricky’s dusky trip hop play to Patti Smith’s battle cry for the determined, these are the tracks that kickstart the duo’s days and inspire their work.

Tim's Playlist SIDE A

Makes Me Wanna Die by Tricky
“Featuring Martina Topley Bird from Tricky’s debut album ‘Maxinquaye’,” says Tim. “This makes me wanna cry, I saw him play with his back to the audience.”

Mother by John Lennon
“This was a toss up between ‘Cold Turkey’ especially for its groans and moans at the end but ‘Mother’ prevealed.”

Fodderstompf by Public Image Limited
“My Brother lived in London in the then notorious North Peckham Estate, while I was growing up in the countryside he bought into the house vinyl copies of Public image Ltd  ‘Metal box’ and ‘Religion Attack’  with their astonishing covers designed by Denis Morris. Most of the family could not stand P.I.L, I grew to love this as it was completely alien to anything I had seen or heard before.”

The Boiler by The Special AKA feat Rhoda Dakar
“Written by the Body Snatchers, produced by Jerry Dammers. I recently had the pleasure to meet Rhoda, I asked her about the song she sang called The Boiler and said I thought there was too much screaming at the end of the record, she gave me a look that made me regret ever asking that question ever again. Very uncomfortable record to listen to about the rape of a friend of hers.”

Sue's Playlist – SIDE B

Your Turn to Run by Malaria!
“This is what I’m currently listening to on repeat in the studio, the sound of German Neue Wave,” says Sue. “I re-discovered this all girl band from Berlin whilst recently watching the brilliant B Movie: Lust and Sound in West Berlin 1979-89,  if I could go back in time and get to re live any part of history it would be in Berlin during this period of creativity born from the tension of conflict.”

Station to Station by David Bowie
“This is a song that doesn’t end the same way it started – it begins with the mechanical, repetitive, noise of a train engine starting up, fooling you into thinking you are listening classic German minimalism – but halfway through it cracks open to reveal a pure futuristic soul funk explosion underneath.”

Anyone who’s ever watched David Bowie perform this live in the film ‘Christiana F’ (We Children from Bahnof Zoo) will see Bowie at his most handsome.”

Piss Factory by Patti Smith
“Patti Smith’s ‘National Anthem’ for those of us desperate to escape the life in which we were born.”

I’m gonna be somebody

And I will travel light, oh, watch me now

Nightshift by Siouxsie and the Banshees
“One of my all time favourite Banshees tracks, the secret weapon from their fourth and very dark studio album ‘JuJu’. Nightshift was an eery homage to Peter Sutcliffe, known as the Yorkshire Ripper who’s murders dominated the news at the time and incited the nation to lock up your daughters.

I never for one moment stopped to think ‘Is this really the stuff that a pre-pubescent teenager with a dispossessed mind should be listening to all alone in her darkened room?’, but surely to be imprisoned in your bedroom WAS the safest place to be.”

Billie Jean by Michael Jackson
“This is one of the best records ever made and this will ALWAYS get me up on the dance floor – but don’t tell anyone.”