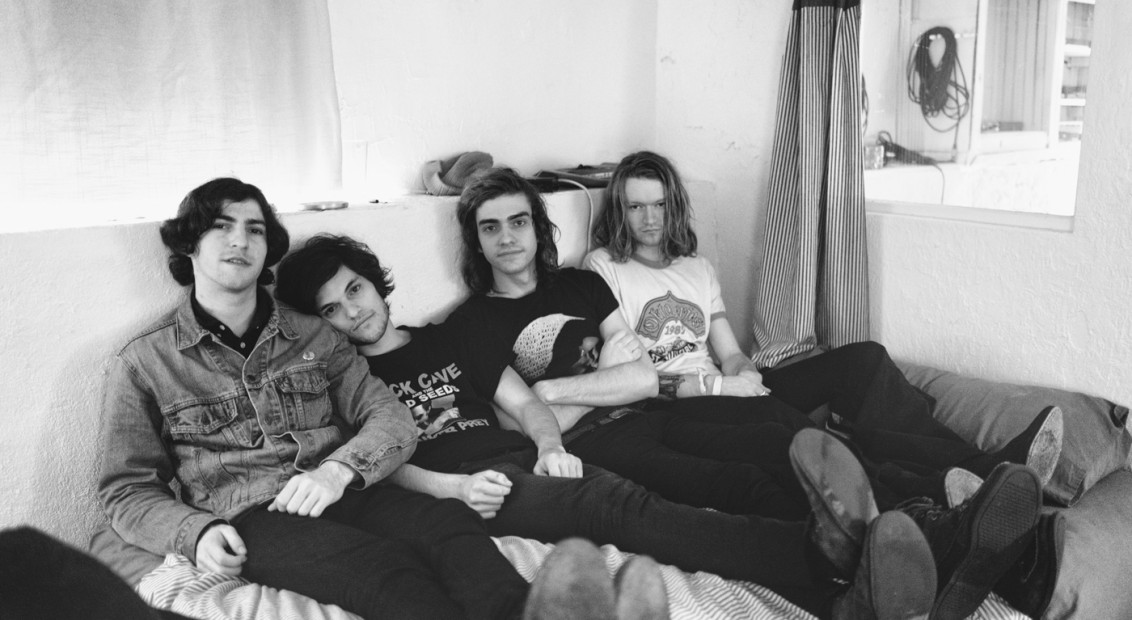 With no time to stop and think, Acid Dad are smashing out uninhibited, uncompromising mayhem; 60 shows in one year alone is no mean feat –including 6 storming CMJ shows in 4 days. Yet having played so much these four New Yorkers balance it out with an impressive tightness and immaculately honed sound.

Frivolous, fun, but 100% dedicated to their craft Acid Dad’s passion and relentless energy is carrying them sky high, and with an EP out early next year, and a huge tour following, they’re on an upwards trajectory.

Lola Young: You’ve played live so much! Are you still riding off the freshness of the whole thing?
Sean Fahey: It’s all super fresh, I still get nervous every night. Our show at The Wick in Brooklyn was the weirdest and the best.
Vaughn Hunt: We had sleep deprivation and too much McDonalds and alcohol. It was a great fleeting moment though, it just happened, I was doing stage sprints.
SF: Like an AC/DC show.

LY: If you could sum it up, what energy do you want to put out to people?
SF: I want to sweat on people.
Kevin Walker: I love seeing kids moshing to our music – because thats what we do at great shows!
VH: We also want to make people cry, we’re going for a melodic aggression. Danny and I write some sad songs. We tested it out at an acoustic show the other night and I felt so good after it, made Kevin cry…
Danny Gomez: Sad songs are the best, the hardest hitting, most sincere.

LY: You come across as super autonomous and self-ruling. Like if you’re going to do it right, do it yourself. Did that just come about naturally?
VH: I record everything in my studio and mix and engineer it all.
KW: I’m a concert promoter so I was able to book us loads of shows, we never had to play those shitty venues. Boom, cool bills right away, packed rooms, very lucky.
DG: We’re all just hanging out, we’re best friends.

LY: It’s happened really fast.
KW: Yeah, and now we’re starting to build a team outside of this and then tour for evermore basically, all of February through May.
VH: We just played as much as we could in Brooklyn, an absurd amount, about 60 shows this year. Every show is a new opportunity.

LY: I’ve heard you have a place upstate… tell me about it!
KW: My Grandpa has this property with a barn that we just invaded.

LY: Sounds great.
KW: Yeah it’s on this huge meadow with woods everywhere.
DG: Super quaint and homey.
VH: And stars. Drive around in a pick-up truck feeling hicksy, swim in the pond.

LY: I love upstate NY! How do you get the right vibe when you’re recording?
DG: Play with lights. Vaughn’s got these pink mojo sunglasses he puts on when he’s really into it.
KW: The magic happens up there for sure.
VH: We track pretty fucked up and then sober me is like, “Okay, fix that little bit.”
SF: Too excited..
VH: But the energy is there, then we all produce it.
KW: We always try to record the core live. 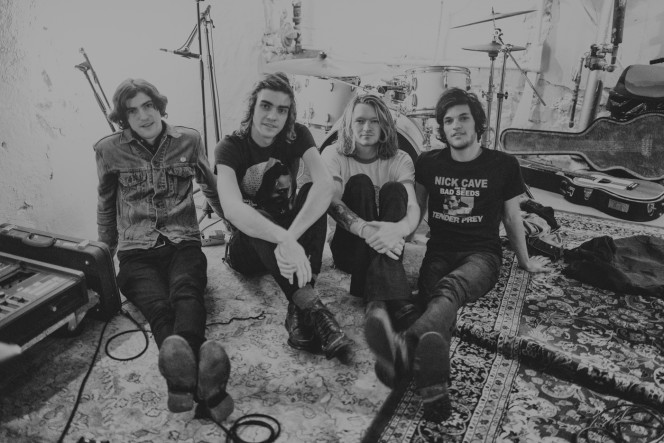 LY: What’s the direction for your new material?
VH: Some more left-field stuff, psych, washed out tambourine and spacey guitars..we’ve got 60s, 80s, everything!

LY: I feel that you take things from different places, sprinkle it together and make it your own thing- so it feels really relevant. Were there any art/ film references that you surrounded yourself with when recording?
VH: I’m wearing my favorite movie Repo Man, super weird, classic anarchy, young teenager punk.
KW: We watched the entire series of Band of Brothers – a WW2 Scorcese series, super violent and bloody.
DG: We were upstate in dead winter and would go out smoke a cigarette and feel like the soldiers in it fighting the elements!
VH: Also the influence of NY city and how intensely the city pushes you, sometimes it drives me insane.. But being influenced is great. A lot of the time we just take an organ thing and make it a guitar thing.
KW: We’re definitely not one of those post-modern avant-garde experimental bands..it’s much more obvious the lineage we come from.. there’s nothing academic about it.

LY: Yeah it feels very unpretentious and natural, like you just play what you want. What about your lyrics?
VH: I kind of freestyle, just say words that come from a subconscious place, mumble a lot. Then everyone hears something different which is cool because they all turn into weird, great lines.
DG: I’m a big fan of Leonard Cohen, we all have different styles.
KW: Yours are like abstract love ideas.

LY: You tell stories?
VH: I love telling stories. Graveyard Kids is a fictional story about being kidnapped, held hostage and running away.
DG: Folklore.
KW: We talk about our dreams a lot too. Vaughn has fairytale crazy dreams, and mine are like complete reality.
VH: Yeah, I was chilling with satan last night. Flying in dreams? Got it down.