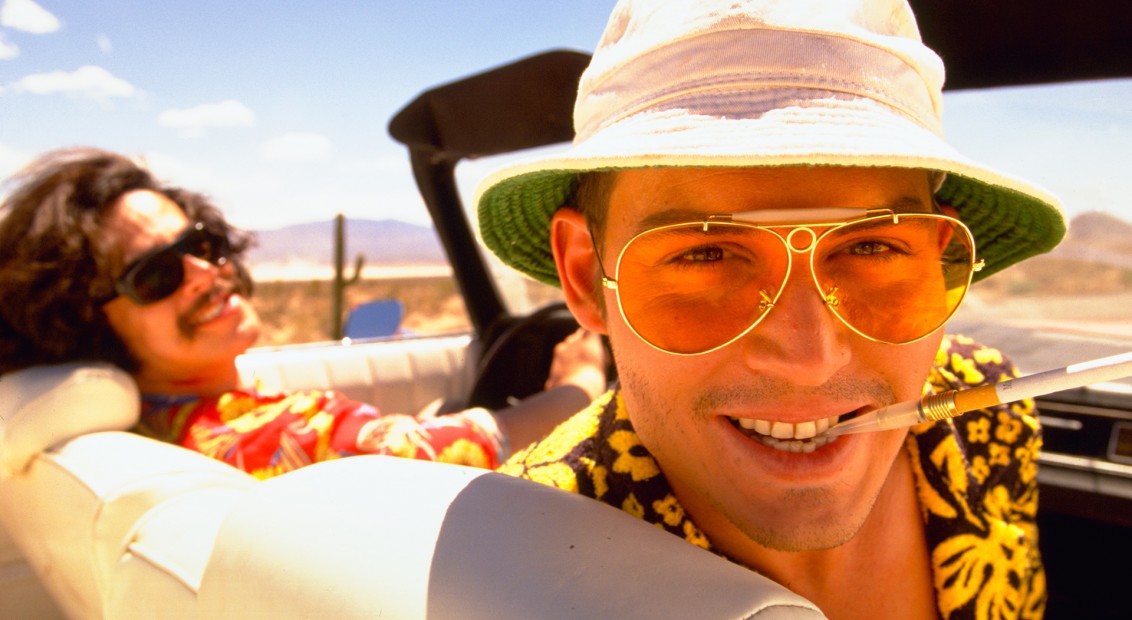 Fear and Loathing in Las Vegas is now a graphic novel, cartoonist Troy Little tells us about going Gonzo

The story, which first appeared in Rolling Stone in November 1971, sees Thompson, under the pseudonym Raoul Duke, and his Samoan attorney Dr Gonzo embark on a drug-fuelled “Savage Journey to the Heart of the American Dream.” It’s not the first time the rip roaring tale has been adapted – it was immortalised when Monty Python Terry Gilliam famously took it to the big screen in 1998, casting Johnny Depp (friend and lifelong fan of Thompson) as the visor-clad journalist.

This is, however, the first time Thompson’s writing has ever before been re-imagined as a graphic novel – and Little does it serious justice. The cartoonist’s energetic style adds a new edge to the full throttle epic, depicting the story faithfully via Thompson’s own words. The manic, visceral nature of the narrative lends itself to the sharp format, a vivid example of how novels can transition into comic book form.

Alex James Taylor: What made you decide to adapt Fear and Loathing into a graphic novel?
Troy Little: The idea was all Ted Adams (IDW Publisher); I’m just the lucky guy who got roped in to do the grunt work! I was actually working with IDW as writer and artist on for the new Powerpuff Girls series when out of the blue I received and email from Ted wondering if I’d be interested in doing a pitch for Fear and Loathing. Powerpuff Girls equals Hunter S. Thompson? I dunno. But whatever possessed him to ask, I’m grateful for the opportunity! [This experience] has been one of the most amazing and creatively satisfying projects I have even been a part of.

“I just wanted to get a better understanding of Hunter S. Thompson as a person to be able to separate that from the character of Raoul Duke – at least in my own mind”

AJT: The book has this amazing manic energy to it, how did you go about keeping Hunter’s voice firmly intact and authentic?
TL: That was my personal mandate in adapting the book – to keep the pace fast and the acting intense. The novel starts off like a rocket and never lets up. I tried to keep that energy reflected in the art. I played it halfway on the cartoony side so I could push the actions and expressions to compliment the text and dialogue.

AJT: Is the incorporated text strictly from the book, is it all Hunter’s own words?
TL: Absolutely. You can’t improve on the text, and messing with it just seems wrong. Any time I deviated from Hunter’s exact words with an added bit of dialogue or adapted the narration it was flagged and fixed to keep the text pure. 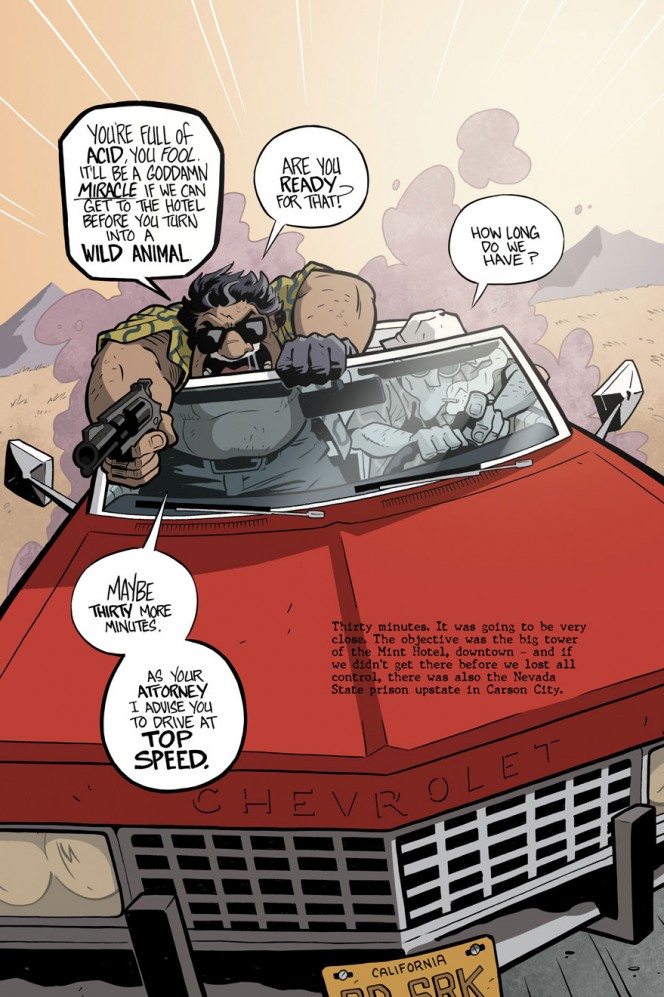 AJT: Were Hunter and / or Steadman influences to your own art?
TL: Yes, in the sense that I’m a huge fan of both of them. As much as I wish I could loosen up and draw like Steadman, I’m too damn technically minded to get that on the edge and dive in like a maniac. I really wish I could though, it looks like a lot of fun!

AJT: How would you describe your style, specifically your approach to Fear and Loathing?
TL: I guess ‘cartoony-realism’ or something…? It’s by no means a realistic take on what Hunter looks like but it’s also not so devolved to become a simplistic doodle of him either. I’m not sure; it’s just the way I tend to deviate when I draw.

AJT: How much research into the story and Hunter’s life did you do?
TL: I have read many of Hunter’s books over the years, and when this project came up on my radar I immediately immersed myself in his life. I re-read books, biographies, watched every documentary, listened to audiotapes, built a model of the red shark, etc. I just wanted to get a better understanding of him as a person to be able to separate that from the character of Raoul Duke, at least in my own mind.

AJT: Did you find it hard to remove yourself from Ralph Steadman’s images and try not to be influenced by them?
TL: Not really, in the sense that right off the bat Ted told me we keep away from any parallels with Steadman’s style. Easy to do, as I mentioned, because I can’t draw like him anyway. Even if I could, it would come off as a cheap knock off. I tend to think it wouldn’t translate well in that manner either – Steadman’s art works best as isolated images rather then a sequential narrative. 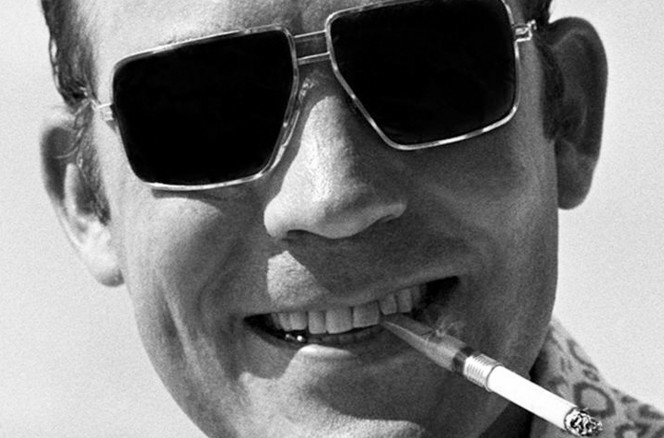 AJT: What is it about graphic novels that appeals to you? Do you believe that it makes stories more accessible?
TL: Personally, I love graphic novels. It’s my preferred medium to tell stories in. I try picking up single issues of books that look interesting or are getting lots of good press and they just (by their nature) don’t have enough meat in them to sink my teeth into. I often don’t pick up the next issues on account of that. I’m usually late to the party as a ‘Wait for the Trade’ guy. Sure, I think graphic novels can be a way to access books (adaptations, in this case) that otherwise might pass by people who are not big into reading novels. I do hope it’s also a vehicle for those people who enjoy them to seek out and experience the original novels.

“You can feel the manic energy of one of the last modern outlaws, throwing himself with reckless abandon into the maw of this new, jaded America”

AJT: What challenged you the most on this project?
TL: Trying not to psyche myself out all the time! I just knew from the beginning that I’m not going to be able to live up to my own expectations and had to reconcile that as best I could. This is one of my all time favourite novels as well as a fiercely beloved cult classic, so the pressure was on the whole time. As a fan myself, I’d be skeptical of anyone trying to turn this into a graphic novel. All I can say in my defence is I put my heart into it, for better or worse.

AJT: What, in your opinion, makes Fear and loathing so timeless?
TL: It’s a perfect moment captured in time. The sheen of post war America is off. You can feel the manic energy of one of the last modern outlaws, throwing himself with reckless abandon into the maw of this new, jaded America. That sort of freedom feels long gone from modern society, and I think there’s a healthy nostalgia for it. Thanks to Hunter’s book, every generation can at least live that wild ride vicariously through his words.

Fear and Loathing in Las Vegas, adapted by Troy Little and produced through Top Shelf Productions is available to pre-order here