Legendary London jeweller The Great Frog has teamed up with artist Wes Lang on a limited edition ring in line with the launch of The Great Frog collection at Dover Street Market London.

Adorned in skulls, daggers and snakes The Great Frog’s jewellery runs a consistently rebellious aesthetic perfectly in tune with their red hot customer list – a who’s who of rock ‘n’ roll cool, including Keith Richards, Led Zeppelin, Billy Idol and Slash, to name a few. It is this combined with their intricate artisan production (handmade in their Carnaby basement since 1972 no less) and sustained family direction (Reino Lehtonen-Riley, whose parents founded TGF, works at its helm today) that makes The Great Frog the ultimate go-to jewellers for bikers and rockers. And a fair few of us more meagre folk to boot.

The collaboration with Wes Lang feels a long time coming: the artist, known for his iconic artwork for The Grateful Dead – and more recently Kanye West’s Yeezus tour merchandise – draws on iconic references to rock n roll and the rich history of the American tattoo.

The 18kt gold ring features Wes Lang’s signature Native American skull motif, accented with diamonds and crushed coral. With all this in mind it’s no wonder the ring has been made in a run of just five pieces to be sold worldwide, of which DSM London has two. But if your wallet won’t stretch that deep fear not: there’s also a detailed skull ring part of a special collection made exclusively for Dover Street Market to celebrate the retailer’s 10 year anniversary, now available at in store alongside a fuller range from The Great Frog’s mainline.

Alex James Taylor: So how did the collaboration with Wes Lang come about?
Reino Lehtonen-Riley: We met while Wes was doing a residency at the Chateau and were introduced by a mutual friend over the phone. He wanted to turn some of his ideas into jewellery and was already a customer of ours but we hadn’t met. Then he sent me a photo of my name tattooed on his hand which was somewhat scary, thinking I had bitten off more than I could chew, but I share the same name as his uncle (Reino) so with that the deal was sealed, it was fate.

AT: Was it planned or more spontaneous?
RLR: It was quite spontaneous but due to us being in London and Los Angeles it took a while to get it together. However once we sat down to it the ideas flowed easily.

AT: How was it decided that it would be a ring?
RLR: Wes’ imagery lends itself well to our style of jewellery, we have always been heavily influenced by our biker roots and heavy rings have always been synonymous with outlaw biker get up so it had to be thus. 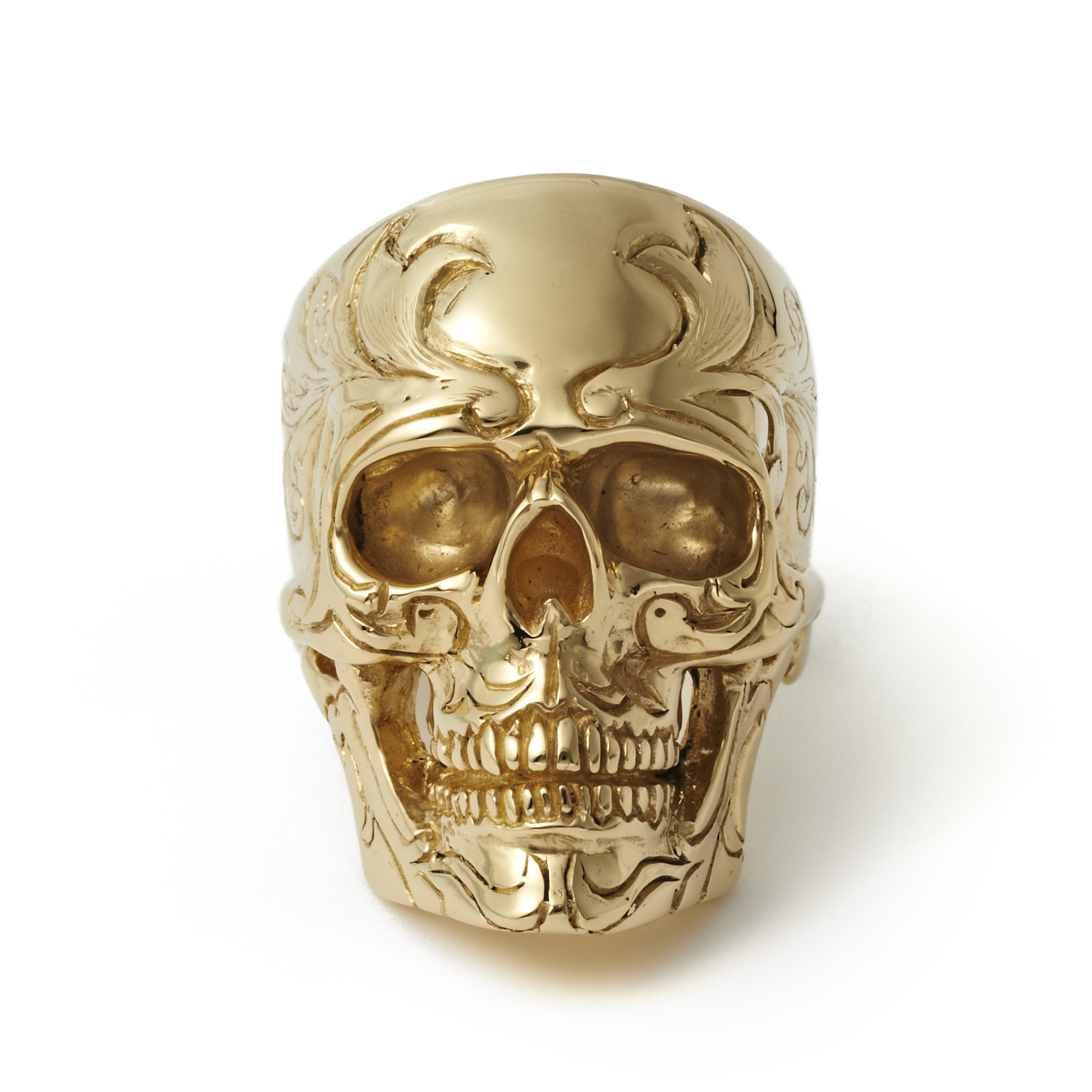 AT: How did the design process work between the two of you?
RLR: Wes is prolific and constantly working so there is a massive outpouring of ideas to draw inspiration but the Reaper and Skeleton Chief stood out, they are a widely used motif through a lot of his works.

AT: Were these rings any more difficult to create?
RLR: Yes, I’m a huge fan of his work so had a lot of internal pressure to do it justice. As we are both extreme perfectionists sometimes this caused friction but it just worked!

AT: What was it about Lang’s style that encouraged the collaboration?
RLR: The symbolism that Wes uses throughout his work is very close to the imagery we use at TGF and both draw influence from the same worlds, plus I really wanted to make some big fuck-off gold rings! It’s not that often that you get to do something so immense!

AT: Both TGF and Wes Lang have a heritage rooted in rock ‘n’ roll, did this shared passion influence the collaboration?
RLR: We share a very similar aesthetic and also an interest in cars and motorbikes so we just hit it off. We both live very unconventional lives and since working together we have become good friends.