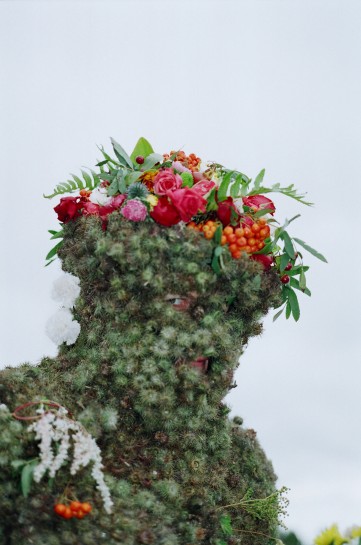 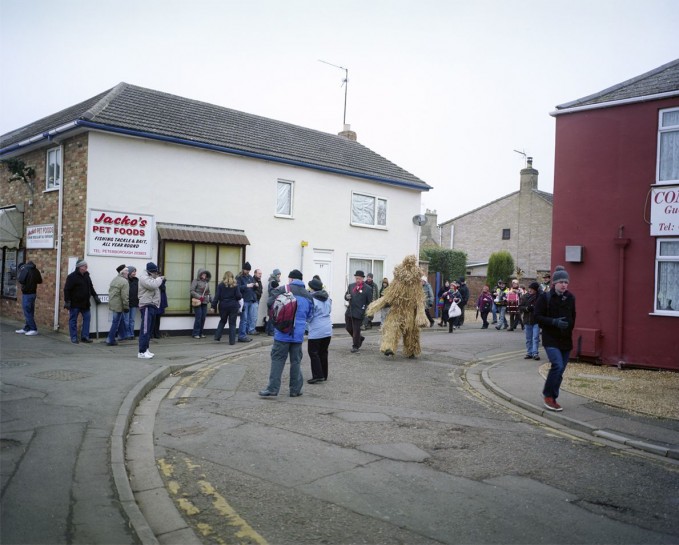 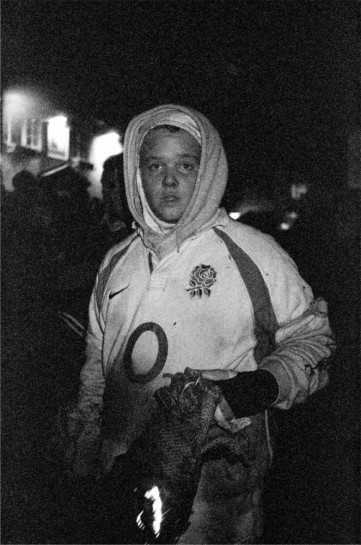 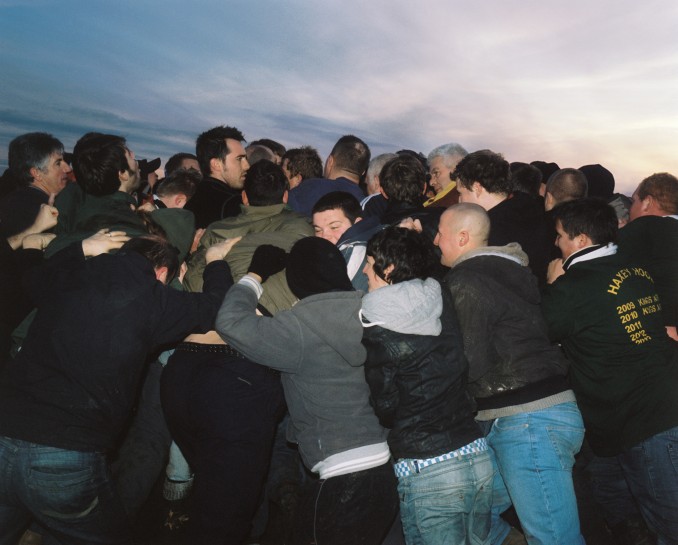 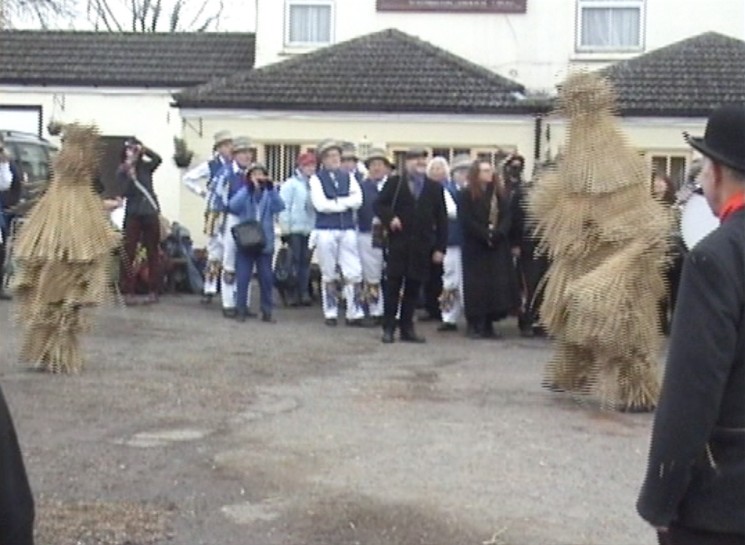 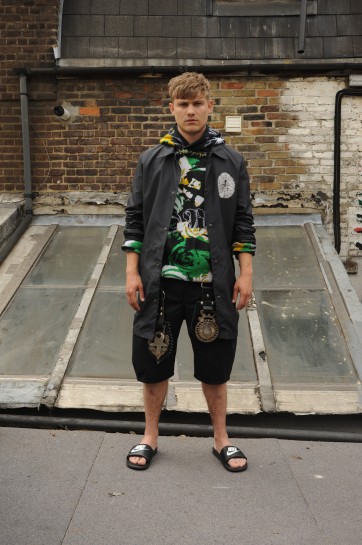 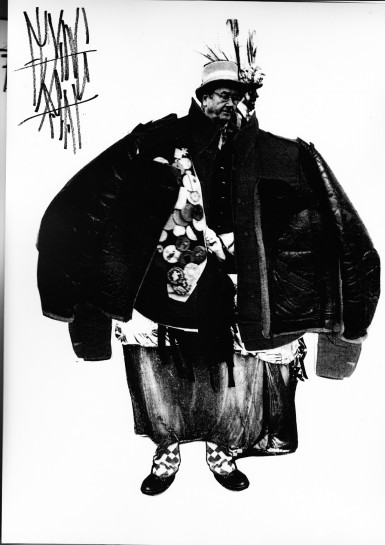 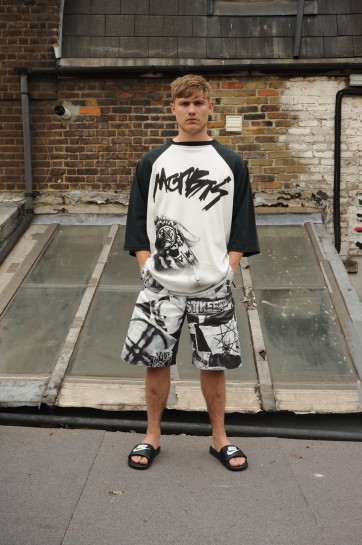 Fire, facepaint, straw, folklore and the right to rituals

Ceremony, an exhibition by RCA graduate, Fashion East and MAN-endorsed designer Liam Hodges and photographer James Pearson-Howes brings together two friends’ creative output, a tribute to the iconography of British folk rituals and the aesthetics of these ancient traditions in a modern world. Showing a mixture of new and archive material, parallels are drawn between their work, creating a space for dialogue between the garments, prints, images and video.

Pearson-Howes has been documenting British youth culture for the past ten years, publishing his work globally – with a longstanding Ditto Press affiliation, Dalston’s red-hot print hub. His photography has provided much of the visual stimulus for Liam’s collections, whilst this exhibit coincides with the release of the third book in his British Folk series.

Interested in expressive, polysyllabic masculinity, Hodges says of his menswear: “It’s about a new luxury brand that doesn’t just cater to high borns. It’s for men who live for the week, not just the weekend.” That means denim dungarees, gaffa-tape trimmed bombers and monochrome knitted trousers, whilst Hodges’ SS15 catwalk just-gone was a more panoramic paean to the folkloric – very Ceremony, in fact. We caught up with the dynamic duo to learn more about the allure of otherworldly rituals.

Tempe Nakiska: How did Ceremony actually come about?
Liam Hodges: Me and James met a few times and worked on my recent lookbook. We both knew the guys at Ditto Press, he was releasing his final part of his book series [British Folk] and it just sort of fell into place.

TN: What inspired British Folk Part Three, James?
James Pearson-Howes: The whole British Folk trilogy was inspired by the darker and more surreal folk traditions still practised within Britain. I wanted explore a different side of folk that most people know of, move away from the bearded Morris dancers and cheese rolling that most people know about. Three new subjects are featured, including the only Scottish ritual I covered in the trilogy called the Burry Man (easily the most bizarre), the oldest recorded tradition within the trilogy Haxey Hood and the Devonshire custom The Hunting of Earl Rone.

TN: You must’ve come across some interesting characters during the project…
JP-H: I was lucky enough to be invited into the room where they prepare the Obby Oss and sing the Night Song for the Obby Oss festival in Padstow, Cornwall. I was really taken aback by the passion and pride in which the people sang. Grown men looking like they were almost in tears. I was genuinely jealous of what they had, a tradition that bought a togetherness with in the community that you seldom see any more.

TN: You focus a lot on British subcultures and counter culture in your work. What do you feel it is that so interests our generation about such movements?
JP-H: I’ve always been interested in subcultures and counter culture because that for me is where the great characters are, people who stand out, people who don’t conform to the norm. A lot of the folk events that I covered for trilogy are quite anarchic and not greatly affected by mainstream societies boundaries, which I love. I remember going down to Lewis Bonfire night and the parent, from a fairly well-to-do family, telling their child they would turn a blind eye to putting a fire cracker in a parking ticket machine.

LH: Maybe it’s a sense of nostalgia… I think it’s more about learning. Consuming knowledge so everyone can define themselves, their friends and environment. Creating a sense of belonging.

TN: Liam, your SS15 debut in June looked to the Kibbo Kift and psychedelic campfires for inspiration, that folk-y feeling of belonging…
LH: Yeah. There’s a nice story in the way people interacted and built the group, learning together and growing as one. The way built their own real-world fantasy.

TN: You were heavily inspired by James’ work with this collection – what aspects in particular?
LH: It was the way he tends to focus on the people and characters more than the tourist postcard aspect. There was some sort of normality outside of the spectacle that really drew me in.

TN: Is there still a place for the rural and esoteric rituals in our fast-paced society?
LH: I hope so, otherwise there wouldn’t be anything new, surely we would hit a moment where everyone was looking at the same shit, on all levels of popular culture. It would never move on. Without other influences (old or new) it would be stuck, like a perverse sense of perfection. That would be horrible. Surely we would all stop trying to create or change anything.

JP-H: Definitely. I think nearly all the festivals I covered had such a big turn out, and I hope they will continue to grow. And one of the reasons why is because of the ease of finding out these traditions, before you had to either live in the local area or red a book on it. Now virtually every event has a website, and a dozen hand-held homemade YouTube clips from the events. The sad thing is there isn’t any museum set up yet to look after and educate people on British folk. I know that Simon Costin, of The Museum of British Folklore trying to set up a permanent museum to do exactly that, fingers crossed he achieves that.