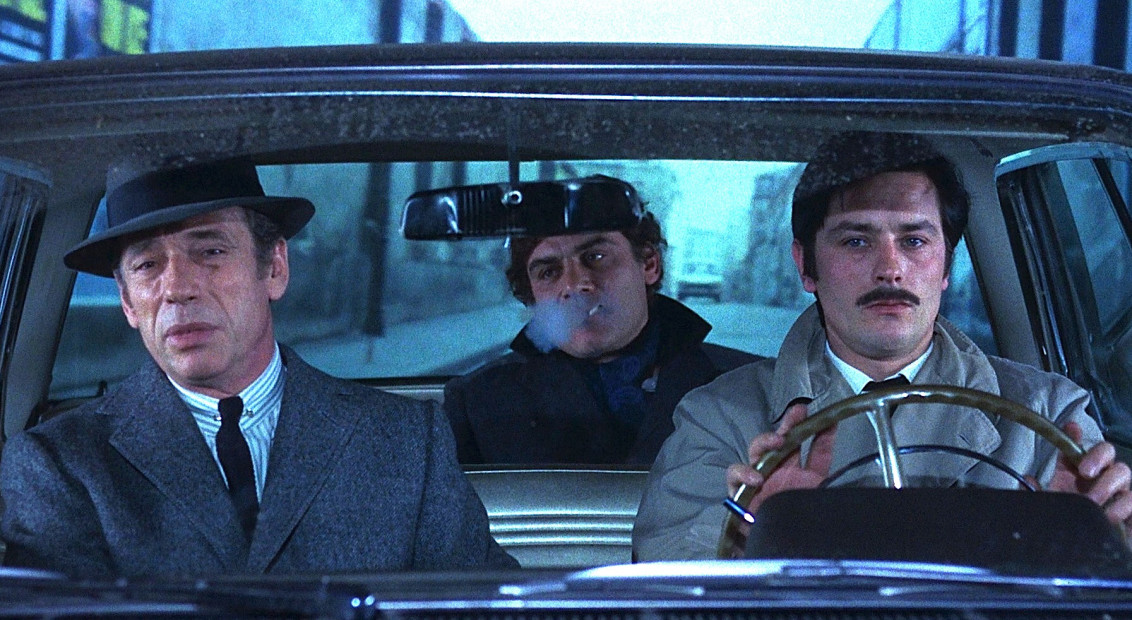 The trench coats and hats, the shadowy street corners. The suave assassins and laconic protagonists who choose smoking over speaking. The modernist bars and dancing girls soundtracked by smooth jazz. You know when you’re in a Jean-Pierre Melville film. 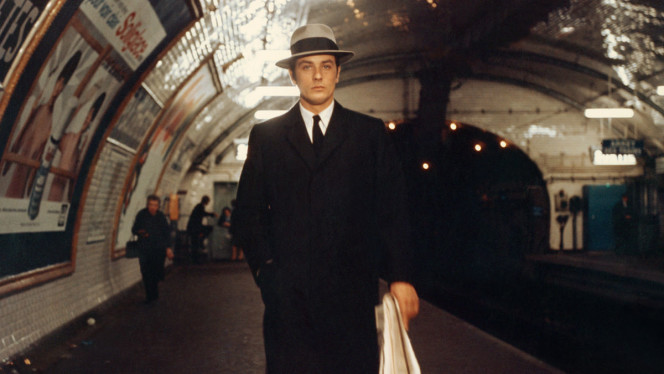 While far from prolific, partially due to the fact he passed away at just 55, Melville’s filmography forms a holistic and brilliant portfolio. Fusing a fondness for Hollywood gangster movies of the 30s and 40s with a European filmmaking style, the French director redefined the crime genre aesthetic and cues: never more so than in his seminal trilogy Le Samouraï (1967), Le Cercle Rouge (1970) and Un flic (1972) — the cornerstones of his lasting legacy.

Born Jean-Pierre Grumbach and adopting the moniker “Melville” after his favourite American author – Herman Melville, author of Moby Dick – he fought for the Free French Army under De Gaulle during the Second World War, before turning to filmmaking on his return. Rejected from the French Technicians’ Union (in those days, French directors needed to have a permit), Melville was defiant in carving his own path, founding his own production company in 1946 and releasing films outside the system. Like the characters he wrote on-screen, Melville took an unconventional path, steering away from the recognised routes. 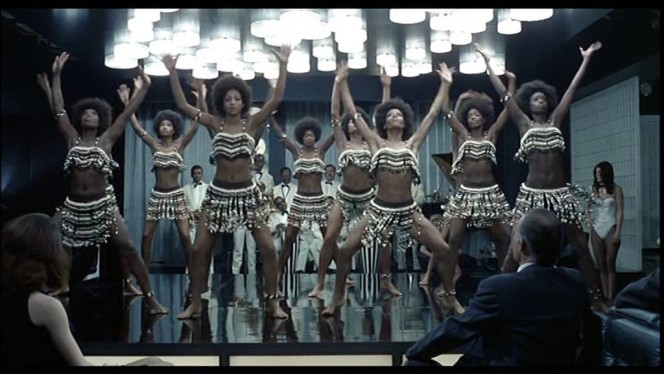 Throughout his oeuvre, Paris looms large, becoming a character of its own. In Melville’s vision of the French capital, the city’s bars and clubs take on totemic importance as parlours of debauchery and degeneracy. Here, in shrouded back booths, stoic and stubborn men in trenches and snap- brims exchange information, tapping out their Gauloises to a lounge beat as shots are fired – figuratively and literally. While each film in the trilogy stands alone in terms of narrative, Melville’s vision of a bar remains constant, blurring the worlds into one. Inside these underground cabaret clubs, dancefloors are mirrored, interiors velveted and low-level lighting reveals irregular shadows at every corner. A choreographed dance takes place in each film: lookalike showgirls twist a floorshow as olives circle martini glasses and dramatic pauses punctuate the air.

Such was Melville’s style, he was considered something of a godfather to nascent France’s New Wave movement, inspiring the likes of Jean Renoir, Jean-Luc Godard, Francois Truffaut, Robert Bresson. In fact, Melville makes a cameo in Godard’s Breathless as the philosophising Parvulesco.

It was in his perceived simplicity and acute detail that Melville thrived. From a defined work-frame, he formed connections between worlds as intricate as the dark alleyways where his protagonists lurked. This is a trait that translated to his brooding, alienated male anti-heroes: dropping them into murky philosophical worlds formed around the subtle gestures of criminality, these men were often defined by rigorous professional codes of honour; whether that’s Alain Delon’s emotionally detached hitman in Le Samouraï (1967) or Jean-Paul Belmondo’s subtle yet sensual depiction of a man of the cloth in Léon Morin, Priest (1961). These codes were born from Melville’s fascination with both American gangster flicks and Japanese yakuza film; mixing in his own European stylings, Melville formulated his own unique blend. 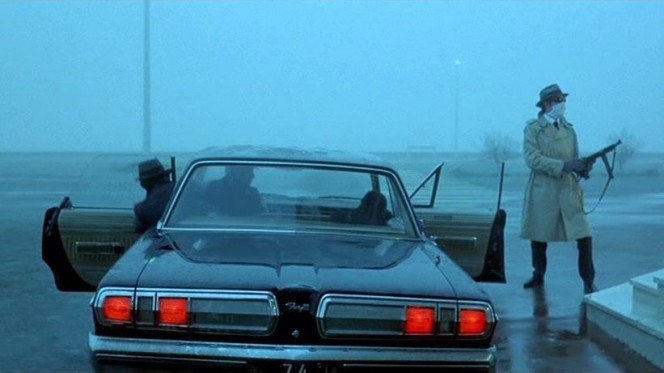 Alain Delon is cast as Jef Costello, a ruthless professional assassin and Melville’s signature anti-hero; his trench coat the tailored equivalent of a cape. On a job inside a Parisian nightclub, Costello is tempted by a female single who witnesses his hit. Breaking the first rule – not to get emotionally attached – Delon’s character now knows that he must place her as his next contract. Meanwhile, across town, he has a partner waiting for him (played by Nathalie Delon, Alain’s IRL wife), who lives in a luxury apartment and is willing to provide Costello with a perfect alibi. A heady mix of style, suspense and sophistication, Le Samouraï is a true masterpiece of neo-noir that places cool tension at the forefront of the chase. 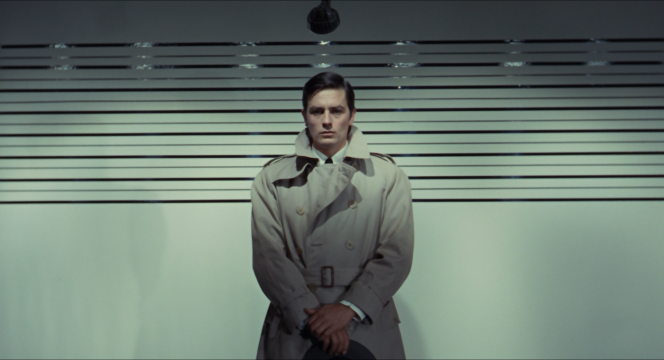 Made three years after Le Samouraï, Le Cercle Rouge operates within the same universe and even reunites Melville with Alain Delon. Honouring that criminal professionalism and code of conduct Melville so often saluted within his work, we’re dropped into an elaborate Parisian jewel heist happening in Place Vendôme, where a trio of gangsters – Alain Delon as recently released prisoner Corey, Gian Maria Volonté’s fugitive Vogel and Yves Montand’s ex-cop Jansen –are being pursued by Police Inspector Mattei.

The film’s title stems from a Buddhist epigraph stating that those who are meant to meet will inevitably do so “in the red circle”, and in the movie, we see Corey trace a circle in red chalk on the tip of his billiard cue – a symbol that the fate of these men has already been cast. With the help of longtime cinematographer Henri Decaë, Melville paints a cooly-muted and subtly dramatic world that harmonies with the narrative and keeps viewers’ senses primed at all times; mirroring those on screen. 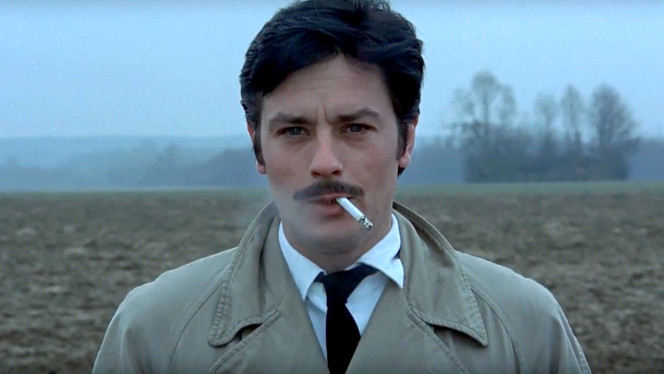 What to watch by Jean-Paul Melville: