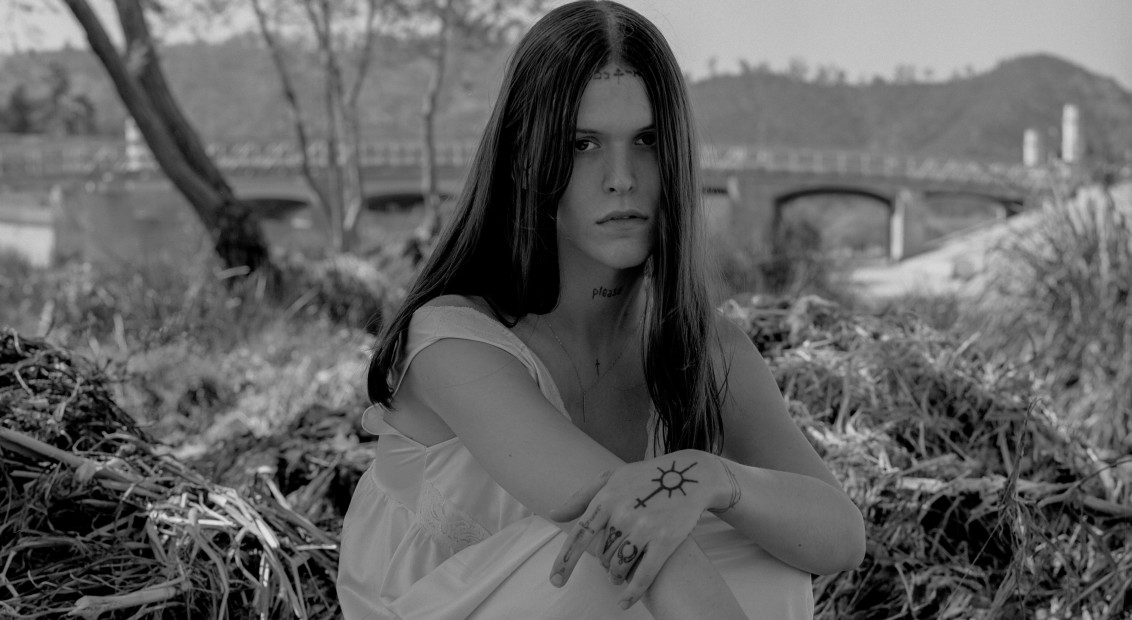 “I’m Southern fucking Baptist!” Ethel Cain proudly exclaims from a dingy motel in Hollywood. Christianity is central to the 23-year-old artist’s life and work – Cain grew up in the Southern Baptist Church, moved into a church in the backwoods of Indiana, and recently draped herself on a cross for a photoshoot. Part of what makes Cain’s work so compelling is her earnest infusion of themes usually felt as taboo for queer artists – her fear of God, her love of the deep south, and her tongue-in-cheek depictions of hard drugs and violence. These subjects feel especially compelling coming from Cain, a trans woman.

All of this makes Cain a ready target for comparisons to Lana Del Rey. Cain is captivating, beautiful, and unabashedly feminine. Her music is tinged with a morbid Americana, her lyrics are at times bleak to the point of recommending her a psychiatrist. All of this is, of course, exactly the point. And yet, Cain’s work sits in vast contrast, and even opposition, to that of Del Rey. Cain isn’t looking through the past with rose-tinted glasses, she’s dredging up the horrors faced by America’s most betrodden. As such, Cain serves as a spokeswoman for America’s underbelly – she isn’t glorifying the violence she’s faced from these institutions, she’s simply reporting it. 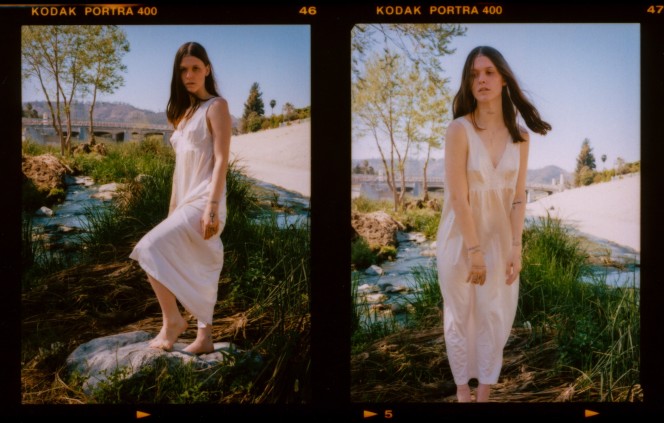 Conor Hudnut: How’s it going? I know you just drove cross country to get here [LA], how was the drive?
Ethel Cain: It was good, it’s been really uneventful which is nice. We just spent a day and a half in Vegas, I’ve never been there. I’ve never been to Arizona or New Mexico either. It was cool driving through the west for the first time, I’ve been flying over it for the past year so it was nice to actually see it.

CH: How is LA treating you?
EC: I’m definitely having the LA experience. I parked my truck in the motel parking lot in Hollywood where I’m staying and got sized up by every single person standing outside. It’s very LA, it’s fantastic.

CH: Let’s talk about Inbred – I’ve found myself particularly drawn to God’s Country, it’s so intense and still has so much room to breathe. Can you tell me about the song?
EC: Thank you, it’s like the tenth version of the song so I’m glad to hear it. I wrote the song back in September, right after I moved to the church. I hit up my friend Adam and asked if he wanted to be on the song, that I had a verse and a chorus written. He wrote back, “Yeah of course!” I had written so many different versions – it was five minutes, then it was ten and a half minutes, then it was eight minutes. I was just never satisfied, it kept breathing and growing with me. Over the course of the EP, I had no idea what I wanted from it. So then finally, three days before the final mixes were due, I started over from scratch. I think all I kept was the piano, and I wrote something completely new. I put it all together in one night – I wrote new lyrics, did new vocals, all of it. I was just like, “Fuck it, this has to be the final version.” It was a whirlwind of a song.

“I think Satan and all that is kind of a cheap facade – if you want the real scary shit you gotta go with God.”

CH: You mention the church you recently moved into [Cain is living in an empty rented church], how do you like living there?
EC: I love the church, the church is cool. Indiana is a lot less cool. There’s not much to do, but it’s not like the south either. I miss the south, I miss the trees. In Indiana, it’s just cornfields. It’s pretty boring – it’s exactly what you’d expect Indiana to be.

CH: What do you love about the south?
EC: It’s just home, I guess. I’m used to it. I know it like the back of my hand. The people are a lot more friendly, I love the air, I love the Gulf of Mexico. I really love the land of the south, the way it looks. I love the trees and the hills and the moss. I just think it’s really pretty, and of course, my family is there. It’s home.

CH: Over the last few years there has been a huge renaissance of young southern artists, do you enjoy being a part of the movement?
EC: Yes, I love it! I’ve definitely seen the southern visual come back, I really love seeing all the moss and white dresses. It’s cool.

CH: A relationship with the church and Christianity is there throughout your work. There’s also a lot of witchy and Satanic references – what is your relationship with all of these?
EC: I definitely love the spookiness of it all, but for me, the real spook factor isn’t so much with Satan or the witchiness, it’s very much in God. I know some of it at face value looks very culty – the candles, and all that. But for me, the true terror comes in God. When you grow up in the church everyone tells you that you have to fear God. Before you love him you have to fear him. Satan to me has never been that scary, he’s just the devil. God has all power, he is all-powerful. He is the overarching and looming face in the darkness. That’s very much what God felt like to me growing up, the person who’s always watching and you can never get away from. And that to me was terrifying. That’s where I’m at. I think Satan and all that is kind of a cheap facade – if you want the real scary shit you gotta go with God.

CH: I feel like there’s a total rejection of God and specifically a Christian God in queer spaces.
EC: Whether I like it or not, God always has and always will be a huge part of my life. Whether he’s being used as a comforting figure or a threat, I’ve always been surrounded by it. It’s not really something you can walk away from. And I’d rather just sit with it than be like, “Fuck the church!” Especially in super southern Christian environments, everything is about God. I definitely have been accused of it being a gimmick, or that I’m cheapening Christianity. It’s funny talking about this in light of everything that’s happening on Twitter with Lil Nas X, but I don’t feel like there’s ever been a space for queer people to discuss the impact that it had on them, for better or worse. We have just as strong of an emotional connection to the church, and more often than not that connection is not positive. They say that artists should create from the heart, this is what’s in there.

CH: What you’re doing seems very authentic.
EC: I will say, I’ve definitely had a lot of people talk about the comparisons to the Catholic Church to what I do, and I always tell them – I have nothing to do with the Catholic Church, I am Southern fucking Baptist!

“That’s what America is to me, the people who never get a break.” 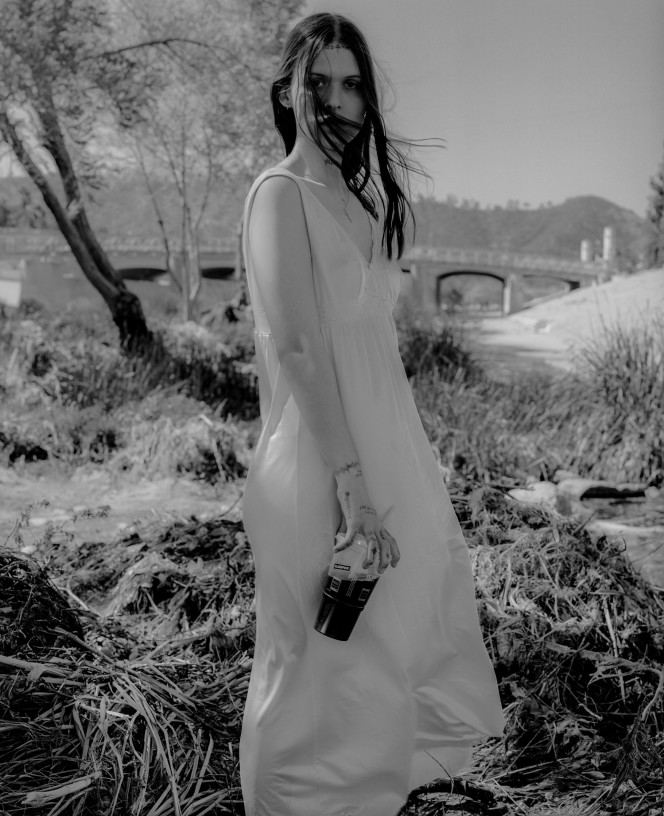 CH: I saw you recently hung yourself from a cross, can you tell me about the idea behind the shoot?
EC: You see Jesus up on the cross every morning, and then when you think about what’s going on behind the scenes – how many queer children are you crucifying to save your faith? How many of us are you putting up on that cross so you don’t have to go up there? Aside from the sick-ass imagery of hanging in a field in a white dress, that’s how it felt. You’re crucifying children to feel as close to God as you can get. If you wanna crucify me I’ll do it, I’ll get up on that fucking cross and hang there. I wanted it to be a raw image – no snakes, no blood. Here I am, this is what you wanted, this is what you get.

“If you wanna crucify me I’ll do it, I’ll get up on that fucking cross and hang there.”

CH: I love when artists make things that are gimmicky and earnest at the same time, and I think you do that really well. There’s an ironic remove but it still feels confessional. I’m also wondering what you think about Lana Del Rey, I’m sure I’m not the first to draw this comparison.
EC: I feel so… I just get these comparisons a lot, and I cannot deny them. I just tweeted today that Born To Die was the first CD that I ever bought. I love Lana, I love her older music. Her newer stuff doesn’t really resonate with me, but I’d be a liar to say I never loved Lana. Musically, I’m not super inspired by her, but I see where comparisons could be drawn. The music is deeper, sultrier, smokier. It’s lazy and sexy while still having viper-like femininity.

But here’s the line between Lana and me. Lana is all facade, she is glamour, she is old Hollywood, she is the peak opulence of the American Dream. And for me, I’m like, that’s just not what America is to me. I think America is the bottom line – it’s the poor people, the people who have been the most affected by the government, by the system. People who are constantly spat on. For me, the American Dream is not real – and if it is it’s built on the backs of all the people who never see any profit. America, when you peel away the Lana American Dream of Marilyn Monroe, the American flag, and all of that… Look, I have an American flag hanging up by my bed, and it’s tattered and torn. I found it in the dirt of an abandoned place, and that’s what America is to me, it’s scraps of a country.

There’s a lot of people in this country who are suffering and getting the short end of the stick, and no one ever talks about it. When I grew up there were a lot of poor people, it was a poor town, and there was a poverty cycle that no one ever addressed. People love to distract themselves with the glitz, the glamour, and the money. But you’re not doing anyone any favours by pretending this shit isn’t happening. And I want to write about it – the people I see who are suffering while no one pays them any mind because it hurts too much to think about. That’s what America is to me, the people who never get a break. 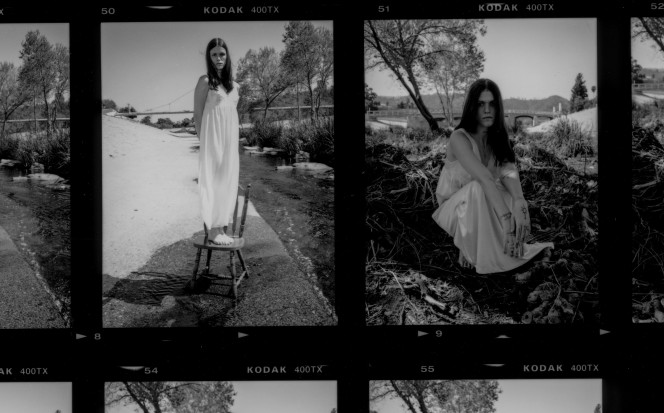