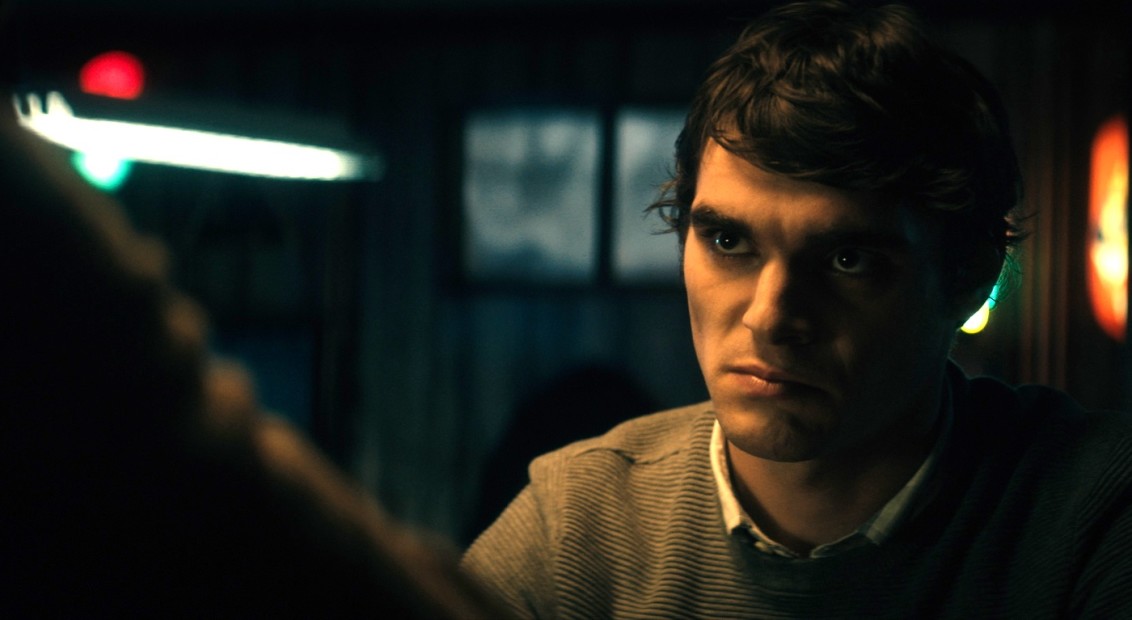 What happens to bar stories when all the bars are shut? Set in dark, claustrophobic hangouts; the troubled characters of Cody Callahan’s new twisty raconteur noir, The Oak Room, spin their unsettling yarns after closing time. Following a year of lockdown and separation in reality, there’s something timely in the isolated locals and empty barstools portrayed on-screen.

RJ Mitte plays wayward college boy Steve, who returns to his hometown after years of distance. He didn’t even come back for his father’s funeral, much to the ire of Paul the landlord (Peter Outerbridge). As old feuds are picked open, Steve begins to tell a story set at another bar, at another time, opening a tense can of worms that builds steadily over the next 90 minutes. Each storyteller brings their own wounds and gripes to their tales and you never know when someone is ‘goosing the truth’.

Unlike his character, RJ Mitte has always felt a sense of responsibility. He was financially responsible for his mother and sister from the age of thirteen. He took on odd jobs and extra work to scrape cash together until he was cast in his breakout role as Walt Jr in HBO’s Breaking Bad. Over the past few years, Mitte has grown into a unique voice in Hollywood, both in his performances and behind the scenes. He was diagnosed with Cerebral Palsy at a young age but has stated his diagnosis empowered him to be better, saying, “When there is an obstacle, you adapt and grow.”

Using his platform – as he believes we all should – he’s been vocal about both positive and negative representations of disability in media, from the power of the Paralympics to Robert Zemeckis’ recent adaption of The Witches and its problematic depictions of disability. We caught up with RJ while he was skiing in Deer Valley, Utah.

Cal Brockel: How did you first get involved in The Oak Room?
RJ Mitte: Cody and the Black Fawn Films team reached out to me. Kind of like, “We like what you’ve done in the past and we think you would be able to contribute to the role.” I thought so too, and after a couple of conversations it just took off. I was very interested in this type of role because it is such a storytelling piece.

CB: It’s got a mythic quality, a wandering son returning to settle a debt with a story. It deals with a lot of big themes like family, fatherhood and memory – was there an element you particularly connected to?
RM: There are a lot of things I connected with when it came to their relationship to the bar. My character and the bartender [Peter Outerbridge], that whole relationship, that kind of father/son, but not really. That parental figure he sees in him. The rebelliousness. That whole vibe. There are so many different subtleties and tones in this story of father and son. They grow up in this different world, and my character had to get somewhere, and now he’s coming back. That’s what this story is about, coming full circle, connected at this one focal point and that’s the Oak Room. It left a lot of things open which I’m all about. I love open-ended stories, like, “Wait what did that mean?” “Wait, go back. Let’s hear that again.”

CB: Definitely. And there’s a lot shrouded in history.
RM: The story was well written and well refined. As far as an internal monologue goes the big picture for us was, “What are we trying to get out of this situation?” That was something that Cody was very open about, letting us feel the words in those spaces of quietness and time. Having those stretched moments or awkward silences, or not. That was really great of Cody and his vision. To let the actors be able to grow. There was no too small, and no too far. We did the gamut on variations in scenes, as a lot of the scenes were one take.

“With everything that people are going through now, this film definitely talks to a lot of the isolation and loneliness.”

CB: There was quite a quick turnaround on the production?
RM: Yeah, it was super fast, about a month. They actually started six months to a year before for all the winter and the flashback stuff. So when we came in it was fourteen days and it was well refined. It was like, “This is what we’ve already done. We’ve gotten everything. Now it’s you. You don’t mess it up.” [laughs]

CB: And it was you and Peter [Outerbridge] in a room for those two weeks basically?
RM: Pretty much yeah. The one room. The one wardrobe, man. It gets fresh.

CB: Watching such a claustrophobic film with the year we’re having definitely strikes a different tone.
RM: I agree. With everything that people are going through now, this film definitely talks to a lot of the isolation and loneliness. That’s kind of where those characters were and I feel like with Covid and everything that’s happened over the last year, you have a lot of people who have been isolated. Not so much a snowstorm… never mind that, this week we had one of those [laughs]. It definitely is a testament to who we are as individuals, to what we want, and what we need in our lives. That’s what I like about this story, it shows you characters that need something. They all need something. It may be something small, or something extremely valuable, but they still need that reassurance. It could be words, it could be an item. I think that’s something we can all relate to. We all need something, and it’s just being able to say it, to put yourself out there to get it.

“I like to tell stories so the taller the better.”

CB: There’s so much about the power of stories as well – about why we tell them. There’s this idea of ‘goosing the truth’ which I think is a great phrase and the film is sort of structured in that way.  Did you learn anything from that?
RM: I like to tell stories so the taller the better. I grew up with a bunch of fishermen and hunters my whole life, I grew up hearing stories. Were they all true? Probably not. But at the time I was like, “Yeah. That’s the word. That’s the law right there.” Again, that’s what drew me to this type of story. Having that kind of job that really is an acting project, and a storytelling project. With The Oak Room, you’re part of the story. You’re like, “Oh my god. Wait, is that real, or not? Who is this person? Is this the real person that he’s talking to, or is this the murderer?” You don’t really know.

CB: Reading about your life, I get this picture of a relentlessly hard-working guy. Where do you think you get that from?
RM: I grew up working. So my whole life I’ve always worked, even before I was acting. My grandparents were hard workers. My whole family is. It’s kind of instilled in my upbringing. I like to work. I like to do my thing, and at the same time, I like to see things get done. And that takes work.

CB: You’re an ambassador for Cerebral Palsy United. Do you feel a greater sense of responsibility in your high profile position?
RM: Yeah. I think anyone who has a voice does. You, even. You have a voice and responsibility to your media market, you know. Your readers, your viewers, your listeners. That’s one of the things that I’m a firm believer in. When you’re in this industry, you have a responsibility and you are accountable for those actions and what you say because you alter people’s minds by what they see of you. How you handle yourself. How you give people shows, movies, whatever that may be. People are reading, consuming, so we all have the responsibility to feed them the right things. Not negative things, not devaluing things, but positive and impactful messaging. For me, that’s a key factor in what I do when it comes to this industry. United cerebral palsy is a great organisation, I love working with them. I work with quite a few others as well. I think if you have a platform and you’re using it for selfish gain and monetary value, you’re wasting your ability. That’s something I think people are seeing a lot more now. They want to see more positive messaging, but at the same time it’s a very selfish industry. There’s a double-edged sword to that. I have an obligation to that messaging.

CB: And you’re just a part of that.
RM: Yeah. I’m one small intricate piece of such a big concept. Yes, one person can change a lot, but at the end of the day it takes a lot more people to change the world.

CB: And this affects the projects you choose to be involved with?
RM: It affects the projects that I want to be involved with, who I want to give my time to, who I’m trying to help promote or support. You know, that changes. That changes weekly, monthly, yearly. There’s always organisations that need help, there’s always communities that need help. There’s always information that needs to be given, and so by finding and working with different groups and working with different movements, you find where you need to be.

With United Cerebral Palsy, and Shriners [Hospitals for Children Open] and the other groups I work with, they’re dealing with individual people. It’s not some screen, not something you’re going to watch on a video. It’s real people that need real help and they’re getting it. How can we support those people? How can we finance these hospitals? How can we deliver the message that these kids and these young adults don’t need to live with doubt or disbelief? To be able to face those challenges that they can’t see themselves facing. What’s key in our industry is that we’re in a position to actually affect those people.

CB: So what’s next for you – what’s on the horizon?
RM: I have a couple of projects. I’ve talked to Black Fawn about another new movie, they’re a great team. I’ll be really supporting The Oak Room and doing a lot of philanthropy work with my family foundation in Texas. That’s where I’m living right now, south Texas. Just work, work, work – but this week I’m skiing.

The Oak Room is available on Digital Download from 26th April in the UK, from April 27th in Canada (Black Fawn Distribution) and from 28th April (also Lightbulb Film Distribution) in Australia and New Zealand.