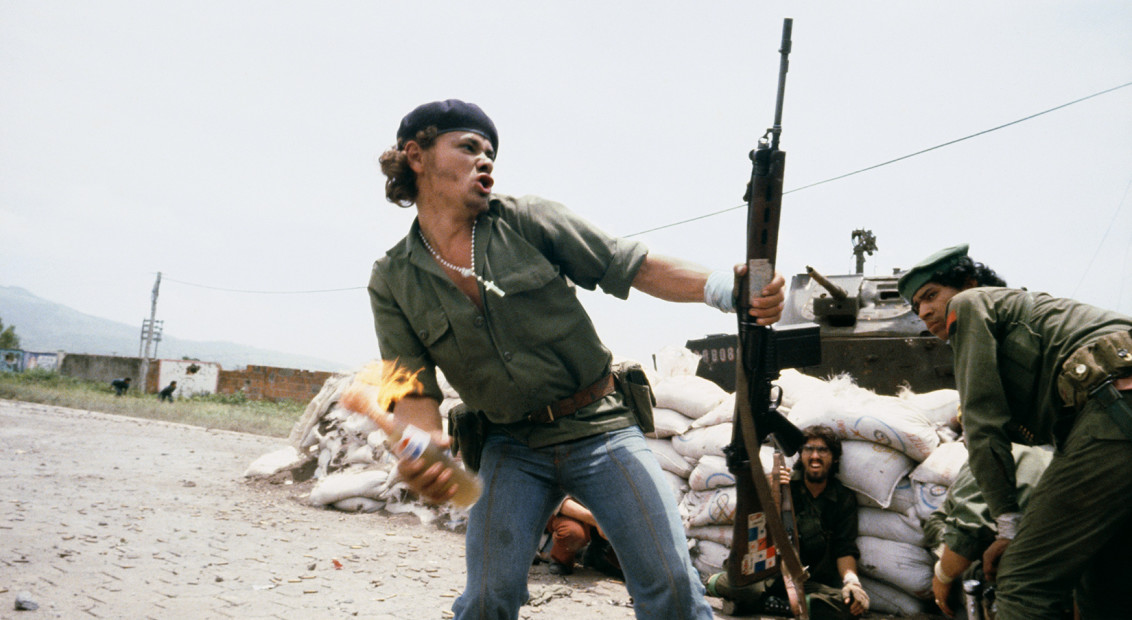 Our highlights from this year’s Magnum Square Print Sale

Above image: ‘Molotov Man’. Sandinistas at the walls of the Esteli National Guard headquarters. Esteli, Nicaragua. 1979 by Susan Meiselas

With the latest iteration of their famed Square Print Sale, Magnum have turned their attention (or had their attention turned) to the random unpredictability of life, the transient moments of spontaneity that lie behind every great photograph. This latest selection of 100 6×6″ prints, all of which are signed or estate-stamped, honours that notion through photographs from around the globe that frame the unexpected.

From pivotal historic moments, captured in a fleeting rush of blood or impulsive surge of bravery, to scenes of pure surrealism that push the limits of the art form, this curated selection embodies the power of the single moment. Spanning more than seven decades, we move from Stuart Franklin’s iconic image of an unarmed man stepping in front of a tank in Tiananmen Square to Susan Meiselas‘ coverage of the Sandinista revolution in Nicaragua and Paul Fusco’s series taken from the moving train that carried RFK’s body across the US.

In tandem with Women’s History Month, this peek inside the Magnum archives spotlights the brilliant work of women photographers. From Micha Bar-Am’s black and white image of a solitary young child in the hills of Jordan’s Samarian region, to Sabiha Çimen’s photograph of student’s on break from Qur’an school and Eve Arnold’s intimate portrait of Marilyn Monroe, The Unexpected celebrates femininity on either side of the lens.

Below we select a number of our favourite images from this year’s sale, accompanied by the photographers’ own words. 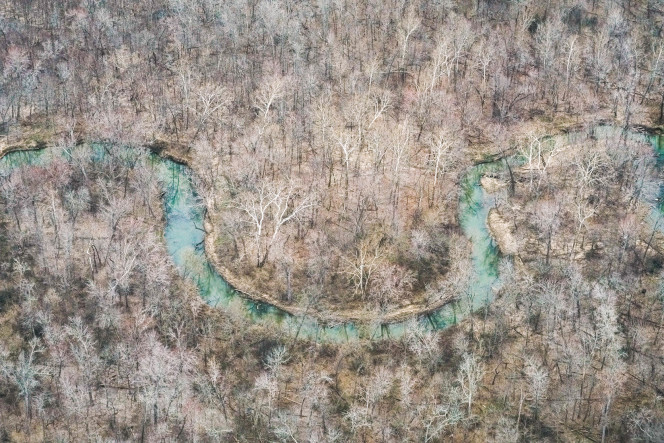 “In the winter of 2017, I was in southern Illinois documenting the environmental consequences of coal mining in the region. I rented a helicopter to survey damage that was hidden from view. From above, the world can become simultaneously richer and more intangible, as the eye takes in far more details, sweeping across the scene, than it can easily distill.”

For me, the camera is not so well suited to the vastness of the landscape, but can render its details in ways that are both abstract and descriptive. After I photographed the surface mining and the polluted runoff, I had a few minutes left. The pilot clearly loved to fly, and through a microphone I guided him to where my instinct took me. I found this bend in a creek surrounded by bare trees.” 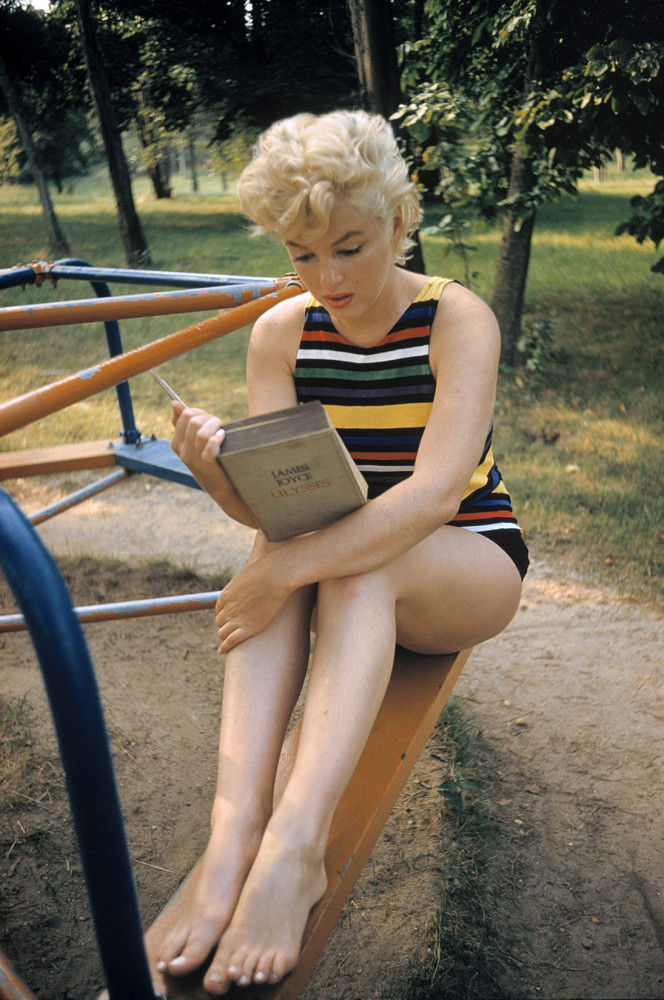 This image was made by Eve during her first shoot with Marilyn Monroe. Monroe had shown Eve her down-to-earth, relaxed personality as they worked together. But the photographer had yet to really witness the actress’s candour. The following is an excerpt from a passage in Eve’s book, In Retrospect, in which she recalled meeting with Marilyn a second time, in order to show her the photographs she had taken:

“She met me at the door in a diaphanous black negligee. She had a hairbrush in her hand. Would I mind sitting through an interview for a European magazine—then we could talk? Almost immediately the reporter showed up. Marilyn greeted her, and while the woman had her head down, looking in her purse for notebook and pencil, Marilyn asked if she minded if she (Marilyn) brushed her hair during the interview. No, of course not. When the woman raised her head, Marilyn was brushing her pubic hair.”

Due in no small part to Monroe’s laidback temperament, the two were to become close over the months that followed.

The child of women working in the nearby fields in the West Bank hills between Nablus and the Jordan river. 1973 by Micha Bar-Am 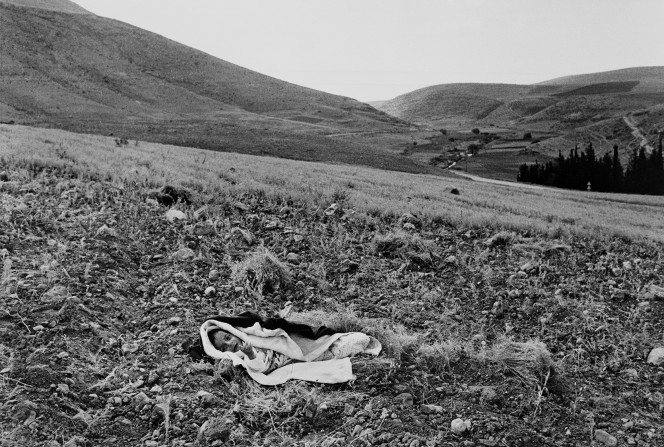 The child of women working in the nearby fields in the West Bank hills between Nablus and the Jordan river. 1973.

“When driving through the biblical hills of Samaria, on my way to a crossing over the River Jordan, I spotted a strange package near the road. I stopped the car to have a closer look – and I realised it was a well wrapped baby smiling at me. I had hardly clicked a few frames when I noticed an angry woman rushing to save the child from the evil eye of the camera. Only then did I see the group of women nearby, perched in a row plucking and harvesting wheat, or maybe chickpeas…” 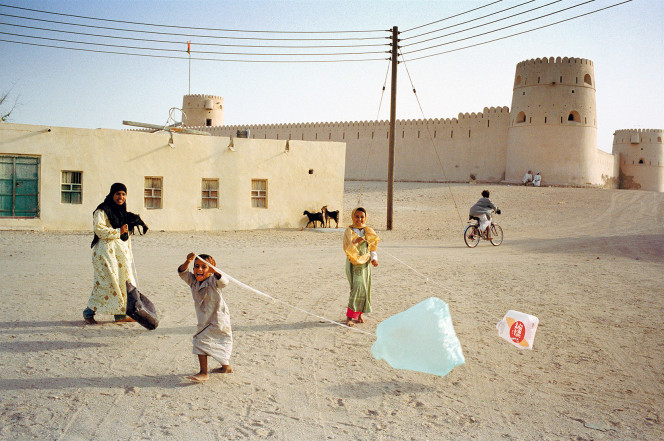 “While travelling through Oman, I came across this fort near Sur. Always on the lookout for the unexpected, I spotted these children playing with kites fashioned from plastic shopping bags. As happens maybe once a year, all the elements – kids, kites, bike, goats, even the telegraph wires – slotted together to make the shape and capture a joyous moment.” 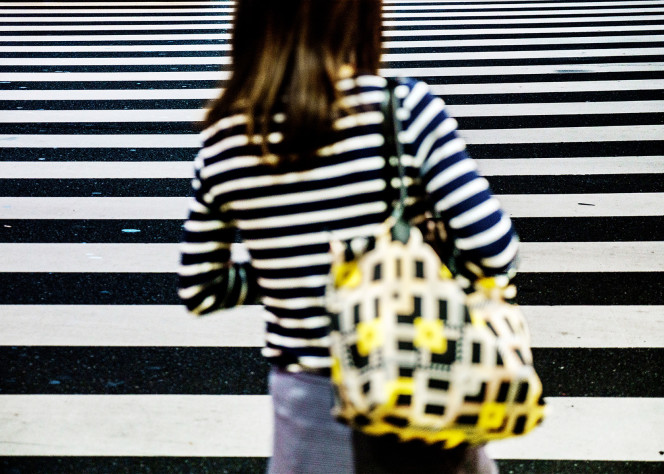 “I was in Tokyo working on a chapter of an ongoing project, and had finished photographing for the day. Tokyo is a city packed with light, movement, and intensity, so I still had my camera on me and ready, just in case. I was starving and heading to dinner but had to wait at one of these huge zebra crossings in Shinjuku.”

They’ve been photographed so many times before, so figuring that to make a picture I would be happy with here would require more time and effort than I had blood sugar for, I wasn’t paying much attention. Then this zebra-dressed woman placed herself right in front of me. Click. Thank you. Sometimes you get more luck than you deserve.” 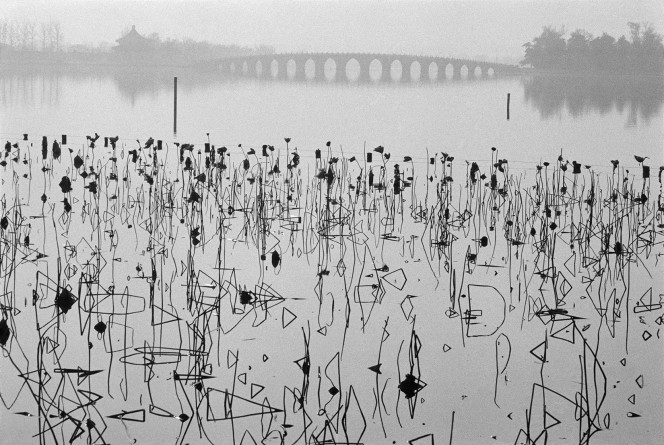 “If you dare to cross a border at the right time, magical things can happen.”

“I was taking photographs of people and I was trying to show what it meant to them there, what they were feeling. I was very concerned that the movement would ruin every shot. I began to concentrate on tracking the subjects in every photo to lessen the effects of the train’s motion, hoping that I would be lucky enough to get a few usable photos. When I started to edit the film in New York I was very excited and optimistic about the subjects and quality of the photos. It didn’t take long to get very strong emotional reactions from the photos.” 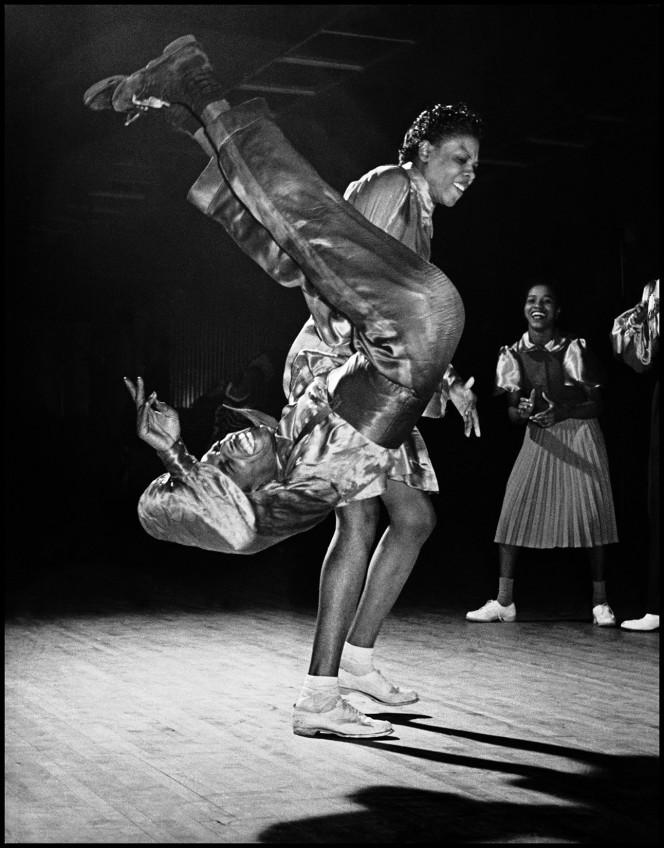 “I am not an artist and I never intended to be one…I hope I have made some good photographs, but what I really hope is that I have done some good photo stories with memorable images that make a point and, perhaps, even make a difference.”

Students having fun on an artificial lake on the weekend. Istanbul, Turkey. 2018 by Sabiha Çimen 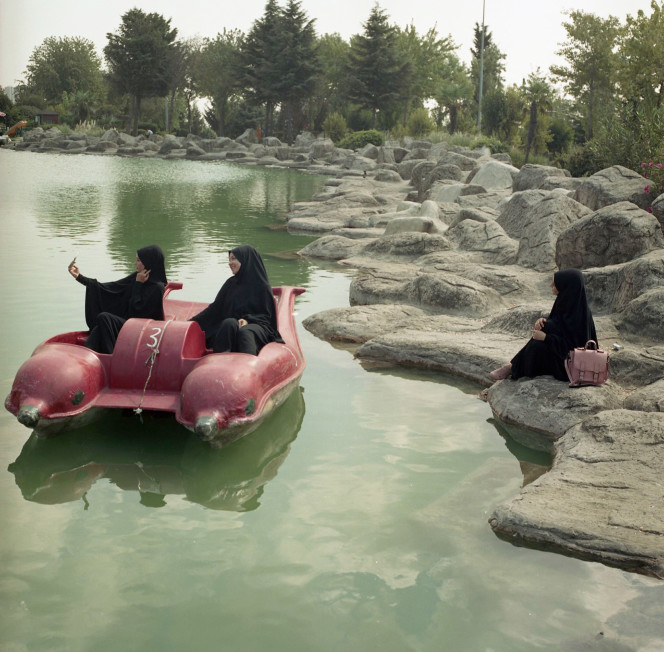 Students having fun on an artificial lake on the weekend. Istanbul, Turkey. 2018 by Sabiha Çimen

“The Qur’an school is an ordered, structured, and predictable environment for learning, so during holidays and break-times, when these girls are allowed to be led by their own whims, they seek the fresh air of the outdoors without any particular plan or direction. There they can let the day take them away to other shores where the wind carries their dreams on unpredictable currents of imagination.” 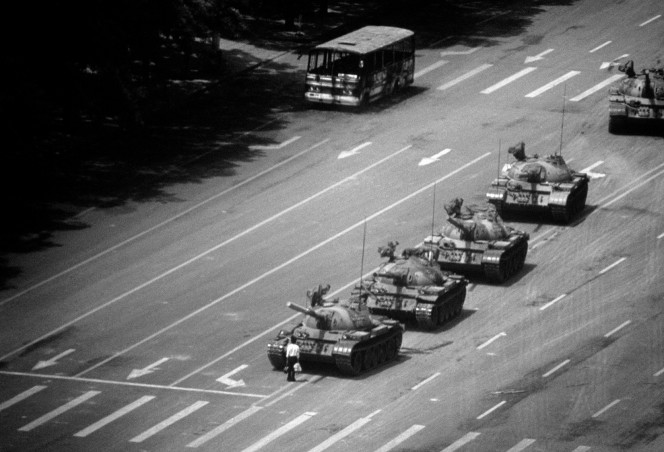 “In June, 1989, following the Beijing massacre, a man stepped into the path of a row of tanks leaving Tiananmen Square and into the history books. It was an unexpected act of defiance. Courageous too. More than thirty years on there’s still a great deal we don’t know: what became of the man, why he was carrying two shopping bags, and the nature of his exchange with the tank driver. One day I hope we’ll know more.” 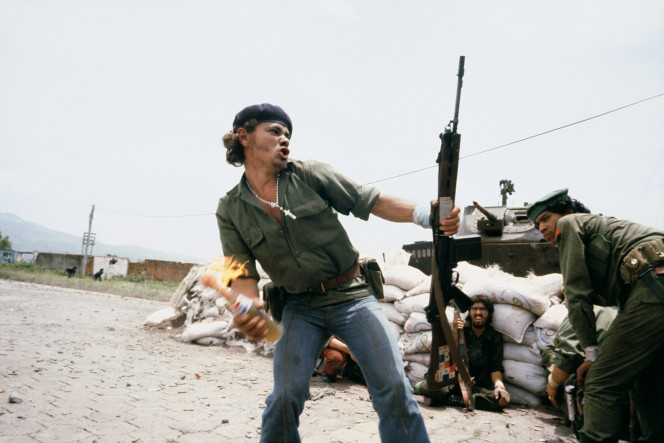 “It was on July 17, 1979, the day before Somoza fled Nicaragua, that I photographed Sandinista Pablo ‘Bareta’ Arauz, whose name I didn’t know at that moment. He was throwing a molotov cocktail at one of the last remaining National Guard garrisons.”

Back then I was working with two cameras, one loaded with black and white film and the other with color. I missed the shot of Bareta’s decisive gesture in black and white, but captured him in color. The image that became known as the ‘Molotov Man’ was reproduced and painted all over the country, before appearing on matchbooks commemorating the first anniversary of the Sandinista revolution.”

“25 years later, Bareta’s likeness was adopted as the ’official’ symbol of the fight against the Somoza dictatorship. In 2018, the ‘Molotov Man’ was printed on T-shirts worn by university students protesting now against the Sandinista President Daniel Ortega. An image can have multiple lives, which in this case neither Pablo or I could predict or control.”