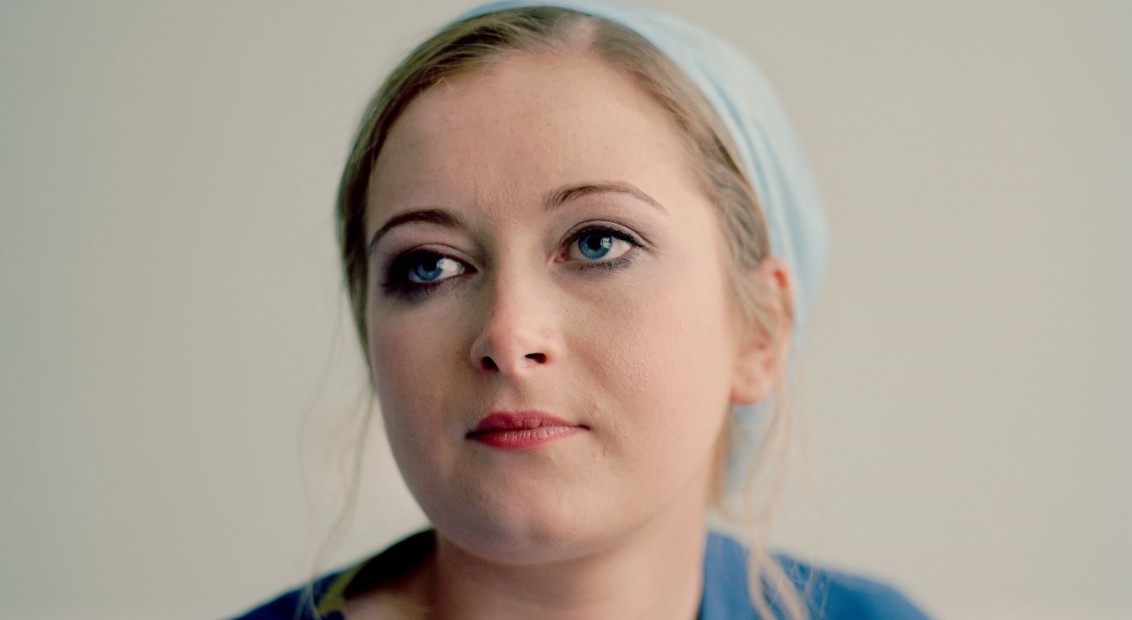 The photographer capturing those at the forefront of Britain’s NHS

The National Health Service. It’s one of the key vertebrae comprising the UK’s backbone and the last year has tested its strength like never before. Many of us have passed through its doors, yet the astounding work that it does remains largely obscured by statistics. Not on Lewis Khan’s watch.

Beginning in 2015, the British photographer spent a four-year artist residency at London’s Chelsea & Westminster hospital. The result was Theatre: a series offering insight into the soul of the NHS where newsflash coverage can often falter. Born in 1990, the Londoner’s project began in response to the threat of a privatised NHS, but his lens was soon refocused on the complexity of human experience within hospital and a reappraisal of traditional power dynamics on its wards. The result is a captivating exploration of fragility and strength, images that reveal how compassion is entwined with, and prevails in the face of, the clinical.

Kahn’s portraits of NHS staff and patients inject a striking note of humanity into the medical environment, providing a sober reminder about what is at the heart of healthcare. These are not ‘frontline workers’, as our government is so eager to tell us, they are people, and Khan’s images are a celebration of their individuality in the face of danger and self-sacrifice. Below, the photographer recalls making the series, embedding himself within hospital life and the encounters that have never left him. 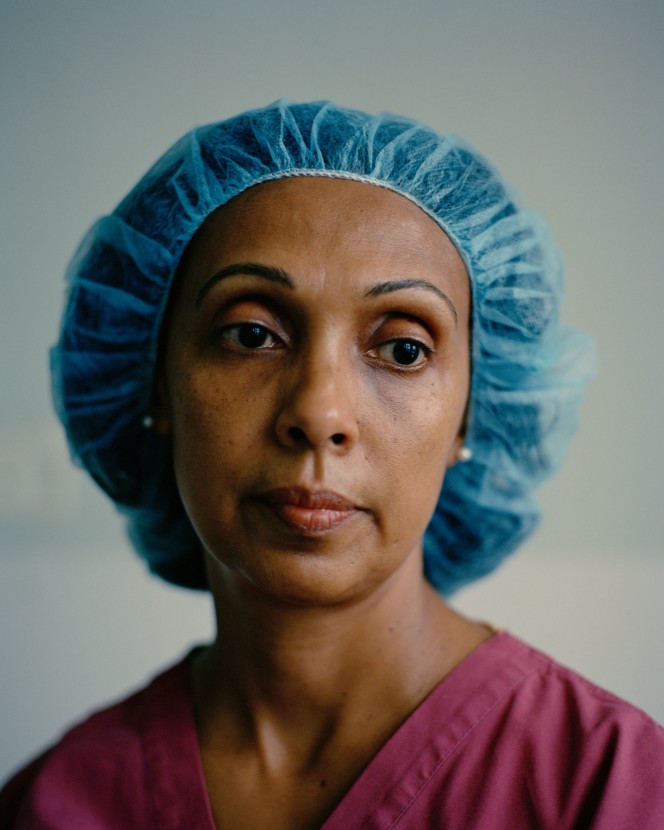 Stevie Cannell: Can you share how the series started?
Lewis Khan: I was invited into the hospital by its arts charity, CW+. I’d previously done a small commission for them, doing portraits which then got up into the hospital itself. Off the back of that, they asked whether I would like to come in and make some work about the hospital itself. This was in spring 2015. I wanted the work to be a voice against privatisation, celebrating the NHS, the people in it, and to have an overtly political voice. That’s what I proposed to them, and they said yes. As the project went on, although the political story around the NHS remained, the actual focus became more of a study of human strength and fragility.

It’s about peeling back some of the identities and perceived preconceptions of power within the hospital: that patients are vulnerable and doctors are strong. Those are very basic ones. Spending time there, and seeing how different it was to my preconceptions, I really tried to represent that in the photos. I wanted to show that staff come into the hospital with professional personal, but there is also a personal side they carried with them, that in some ways is left at the door. Their personal side is affected by the work that they’re doing – there’s really quite tough emotional work that’s going on. You see them as these solely professional people, but actually there is this deeply personal side.

SC: I was particularly struck by how your images communicate the humanity of medical environments – they blend the emotional and clinical. What is it about portraiture that captures your interest?
LK: Mixing the clinical and the emotional was definitely an intention. I think there was a balance of mixing the two without making things too sensational or overly simplified in terms of ‘this is happy and this is sad’. It is all quite complicated and mixed up – all the emotion flying around in there. I was trying to find a path through all that remained true to the experience that I had, and what I felt in there. Portraits are a really fascinating thing to do. There’s something special about that interaction you have with someone. It’s an intense interaction.

If we’re talking about portraits generally, I get a real buzz off the interaction and everything that builds up to it. I like to think of the portrait as the product of a relationship. So actually, what you’re seeing in the portrait is everything that’s gone before. For me, photography is a key to having the experiences you’ve had before – it’s a way of hanging around in operating theatres, or whatever else it might be. You get to have this experience, and then the portrait is what completes it at the end. It’s your reason for being there, but the reason is kind of the experience to start with. It’s all wrapped up in that.

“It’s about peeling back some of the identities and perceived preconceptions of power within the hospital: that patients are vulnerable and doctors are strong.” 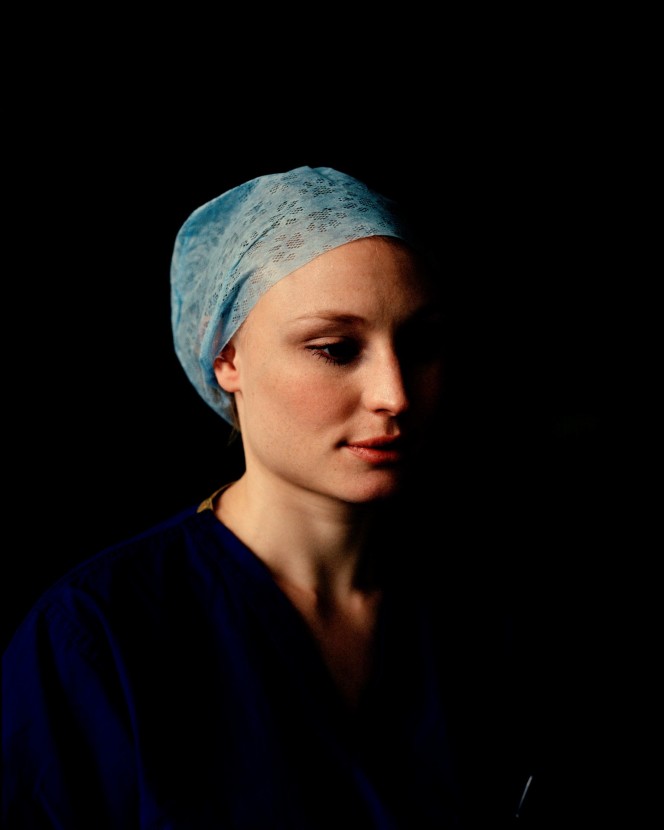 SC: How did people you photographed respond to the camera?
LK: My process was quite slow. It’s generally quite slow, but in there it was particularly so. Say I was working in a certain department, I would often spend a lot of time in there at the beginning with no camera just shadowing staff and observing. I’d just try to soak up what was happening and assimilate into the environment so that when it came to taking pictures I felt familiar. I’d know what happened in there and I’d know what felt right.

By the time I started approaching people to do portraits, perhaps because I felt quite comfortable in there, that came across and allowed me to do practical things – like pick the right moment to ask someone. It’s also important to be in the right place emotionally to be asking people for that. Maybe that reflects, because I didn’t actually have anyone say no. Most people I asked were up for it, and I think that’s probably because I asked them at the right time and in the right way. It’s not that it’s as simple as everyone in a hospital wants to have their picture taken, it was that I worked at it being the right time.

“I like to think of the portrait as the product of a relationship. So actually, what you’re seeing in the portrait is everything that’s gone before.”

SC: Some of your shots are obviously consensual portraits, while others frame more candid insight. There is an image of a few nurses laughing – it looks like they may be taking their break. How did you toe the line between intimate and intrusive?
LK: That picture of the nurses – that was all totally consensual. I had a little set up for doing individual portraits in one of the rooms just off of where their ward was. I’d been doing it one by one, then a load of people came in all at once, and then everyone was in the room. They started messing around and chatting, and I started shooting that. So it was essentially set up for portraits – an all consensual environment – but then this organic thing happened and I started shooting that. Obviously, a big issue in the hospital is people’s consent, what your role is there as a photographer, what you’re actually doing in there, and why. You’ve got to be super careful about that sort of stuff.

SC: Healthcare exposes tremendous fragility and demands extreme strength. How did you harness this dualism in your images?
LK: Some of the people you’re working with are, in some cases, really quite unwell. But also, when you’re speaking to them, you realise that they’re really strong characters. They radiate strength even to the healthcare professionals that they’re working with. It is, as you say, how do you combine both of those things in an image? An approach that I took was to take the photos in a formal way. I tried to be dignified in that I’d try to show the vulnerability whilst also showing the strength. Composing the images in quite a formal and direct way let both of those things come through. 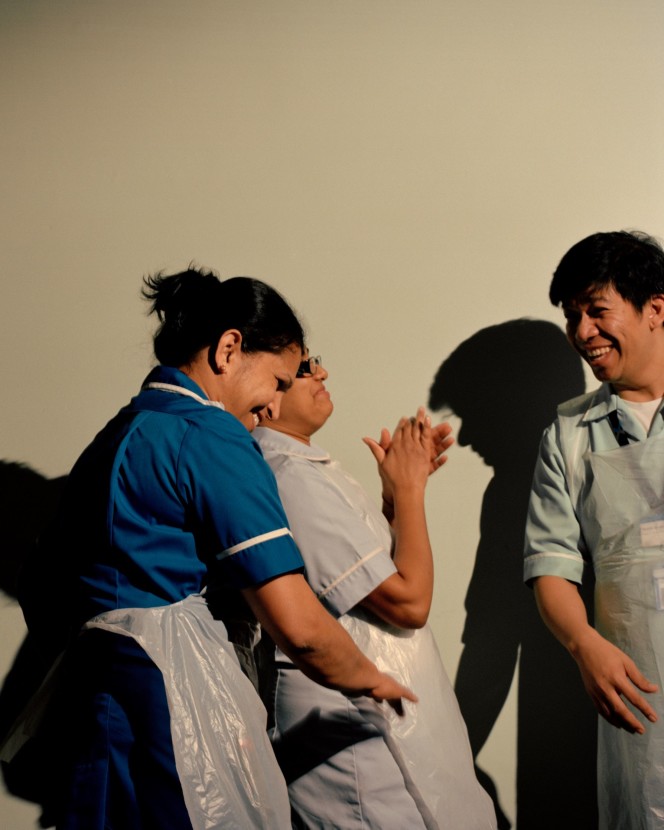 SC: The hospital environment must have demanded that you endure fraught, even traumatic, situations and procedures at times. What was this experience like?
LK: That was a big learning curve – understanding how affected healthcare professionals must be and are by the work they do. For example, the first member of staff I shadowed was a cancer/HIV consultant. I spent about two weeks following him around, meeting his patients, and seeing what he does. Even over those two weeks, you build up a relationship with people and patients. When one of those patients passes away, it really hits you.

I remember the first instance that happened, it was really tough. I remember sitting with him [the consultant], and seeing how he was taking it. He was concerned for me, but I was also seeing how he was taking it: just sitting there in silence with the news, and letting that weight just be. But then in the next instance, just five minutes later, he’s up and being professional with someone else. He absorbs the weight of these things, and then goes again, and again, and again. I took a few days off going in after that. It was a really insightful time into the day to day of that profession.

SC: Did you have any preconceptions about the NHS that were reshaped during your artist residency?
LK: I’m not sure about reshaped. I’d been in hospital a fair bit as a kid and over the years. My experience was always positive and that it was an amazing thing. My preconception was very supportive and a very positive one, and that didn’t change from going in there. It wasn’t like I thought one thing, and that after going in I thought another thing. I thought it was amazing, supported it, and I still think that now.

SC: Was there anything about operations that were different to what you expected
LK: One thing that was interesting about actually being in operations was seeing how much of a workplace it is. You get the same work etiquette that goes with office culture. People are interested in talking about holidays, about this and that. It’s normal work chat, but it takes place in this really highly charged place. That was an interesting observation.

SC: How do you feel the current climate re-frames the context of Theatre, if at all?
LK: I’m not sure whether it re-frames it necessarily. The real initial intention was that this work would be a voice championing and supporting the NHS against its privatisation. I’d say that within the current climate of the pandemic, the need for the NHS, and the need for it to be well funded, open to everyone, and supported – that message couldn’t be clearer. I don’t think the pandemic has re-framed it. If anything, I think that it has highlighted how important it is. Everyone knows, everyone says they know, how important it is, but I think that everyone really truly feels that now.