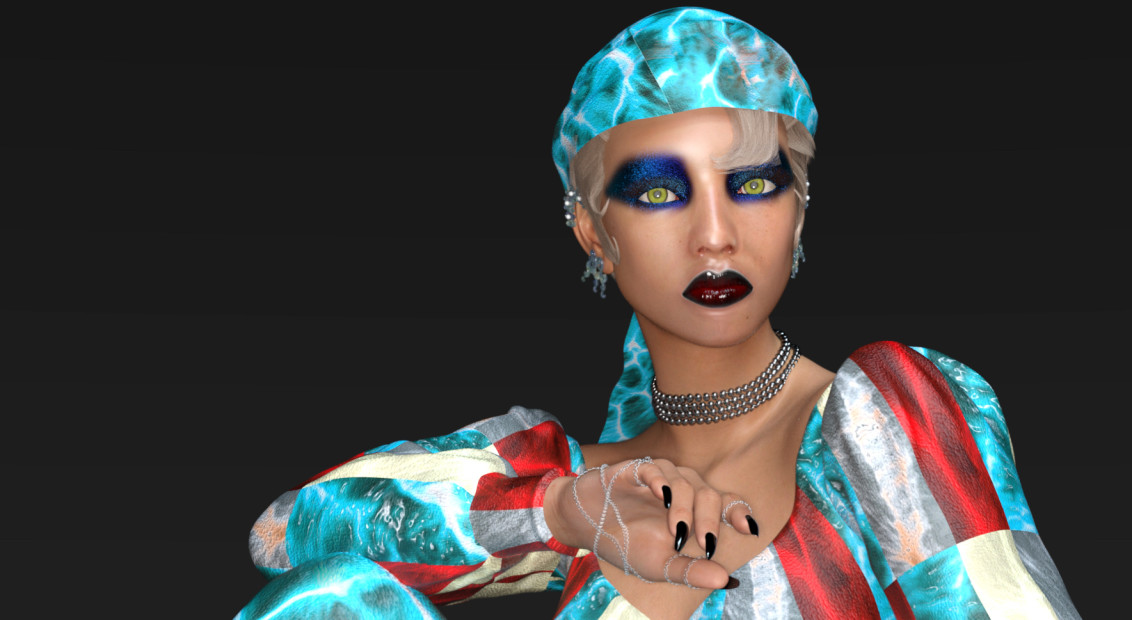 Appeal to Heaven is a new fashion label based in London but existing in another realm altogether. Conceived by stylist and writer Nazanin Shahnavaz and musician Austin Milne during lockdown, the duo took this unusual period of stillness to delve deeper: asking fundamental questions about creativity, fashion, society, desire and purpose. Within this, they had time to stare at the sky – pondering cosmological and sci-fi tropes – and the streets – exploring an eerily quiet and deserted London.

Fusing these references, alongside further ideas of futurism and transhuman philosophy, the resulting collection forges new ground. Proving there’s exploration in the functional, the debut offering from Appeal to Heaven presents a series of second skin separates realised in stretch jersey and silk satin. Each piece is cast in a digital motif named after Antares, a vast star in the constellation Scorpius that can be seen with the human eye and has long fascinated mythologies from around the world. Writing their own lore for this interstellar being, Shahnavaz and Milne’s prints shimmer with aqueous ambiguity, resembling the galaxy’s edges, or strange artificial flesh.

Bridging the physical world with the digital, the collection’s accompanying campaign sees digital artist Ruby Gloom transform a line-up of ABRA, Princess Gollum and Ugly Worldwide (plus Gloom herself) into a series of 3D transhuman avatars dressed in the collection. Titled Transcend Reality: Manifestation of a Deity, Shahnavaz says of the imagery, “They’re all such gifted and creative people, they’re the ultimate dream team. The final images are these striking, hauntingly beautiful portraits that capture their enigmatic personalities while also suggesting an uncanny, alternative future.”

Below, Shahnavaz and Milne unpick the transcendary references that inform their work as Appeal to Heaven. 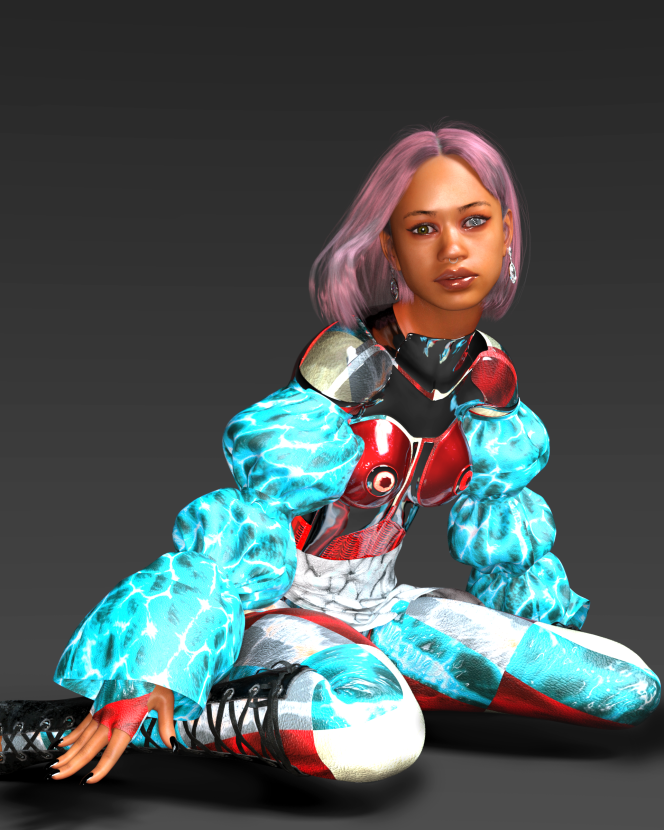 “ATH aims to evoke, invite and reach for the future.

Our first set of pieces includes second-skin turtlenecks, leggings and oversized silk satin scarves. All feature variations of a pattern we’ve called Antares, named after a star in the constellation Scorpius. Astronomers estimate that it’s about twelve times the size of our Sun, so it can usually be seen with the naked eye and figures prominently in mythologies from around the world, with associations to the heart, deities, rulers and creators. It’s beautiful to think that so many cultures can celebrate and derive meaning from something that’s equally shared and yet distant for all. Austin is a Scorpio and we liked the dexterity of the reference, the star has significance within something like ancient Zoroastrian cosmology while also belonging to the high-tech and sci-fi realms of astronomy and space exploration. Others have said our pattern looks simultaneously natural and artificial, as if each variant has been run through a computer program that’s left it distorted and skewed. This is the sort of evocative ambiguity we like.

We collaborated with Hong Kong-based digital artist Ruby Gloom on the avatars for the first campaign and were lucky to have Jazzelle, ABRA, and Princess Gollum on board. They’re all such gifted and creative people, they’re the ultimate dream team. The final images are these striking, hauntingly beautiful portraits that capture their enigmatic personalities while also suggesting an uncanny, alternative future – they capture the essence of ATH perfectly.

We will continue to release new pieces throughout the year and have some exciting things lined up for the rest of 2021.”

“It’s beautiful to think that so many cultures can celebrate and derive meaning from something that’s equally shared and yet distant for all.”

“Lockdown has been so disruptive and completely changed most people’s routines. Prior to the pandemic, Nazanin was constantly travelling between North America, the UK and Europe for her work as a creative director and stylist. Once everything stopped and the world went into hibernation, we found ourselves with the time and space to reflect and think through changes we wanted to make. We felt beholden to fewer people, ideas and conventions as lockdown dragged on and we’d always wanted to find a way to collaborate. Austin is a musician and brings a unique perspective, we thought it would be exciting to apply that sensibility to a fashion project. Nazanin was tired of creating value for others in the industry and it was time to step into the next chapter. ATH embodies that spirit.” 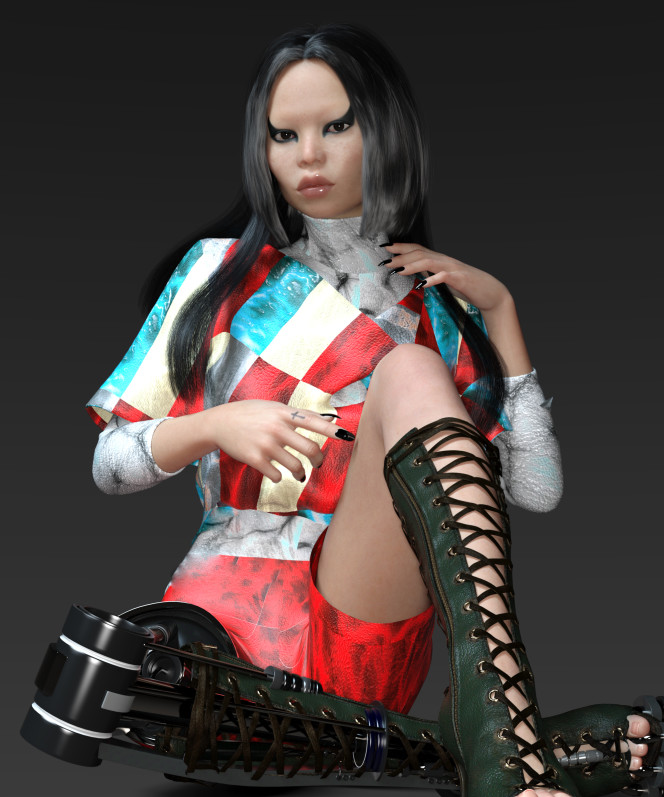 “In addition to the references and direction already mentioned, we found a lot of inspiration in the deserted streets of London. Without the usual crush of office workers and tourists, the centre of the city has been eerily quiet for months and felt like a blank canvas, ripe for reinvention. We’d been reading up on transhuman philosophy and found ourselves enamoured with the Iranian futurist FM-2030. He was profoundly original and advocated for humanity to reorient itself towards the future rather than the past, embrace the technological possibilities on the horizon and to be progressive and compassionate in all manners of life. He abandoned his birth name and gave himself a new, more future-oriented one: FM-2030, and felt the traditional left-right political spectrum was misguided. According to him, we should reconceptualise our choices along a vertical axis, between what he called the Upwingers and Downwingers; those who are focused on the sky, a.k.a. the future, versus those oriented towards the ground, a.k.a the past.”

“For us, we were drawn to this notion of using one’s creativity to manifest a path forward.”

“While he wasn’t perfect, the deep nostalgia [FM-2030] harboured for the future is really interesting. It’s not a sentiment that crops up often in contemporary culture. When you’re young there is this constant yearning for change and excitement for the future, at some point people grow out of that or at least the enthusiasm wanes as they try to hold onto the present. There was a pragmatism to his philosophy but he was nonetheless a dedicated idealist and he followed through with his convictions – he’s currently frozen in a cryonics facility in the Arizona desert and is scheduled to be “re-animated” for his 100th birthday in the year 2030. He’s literally brought his person into the future although it seems unlikely that medical science will be ready for him. His devotion to an unknown future feels more nuanced and human than your run-of-the-mill techno-utopianism, it inverts the conventional emotional compass and relies on his imagination as much as anything else.

There’s poetry in that, some people might call it delusion. For us, we were drawn to this notion of using one’s creativity to manifest a path forward. So much of culture is recycled and nostalgia can be extremely profitable given the safety it offers, but it’s insidious and rarely leads anywhere new. ATH was born with these ideas in mind, we wanted to create something for the new, post-pandemic era that appealed to a universal imagination. Appeal To Heaven.”

Tagged with: Appeal to Heaven Show me more: Fashion