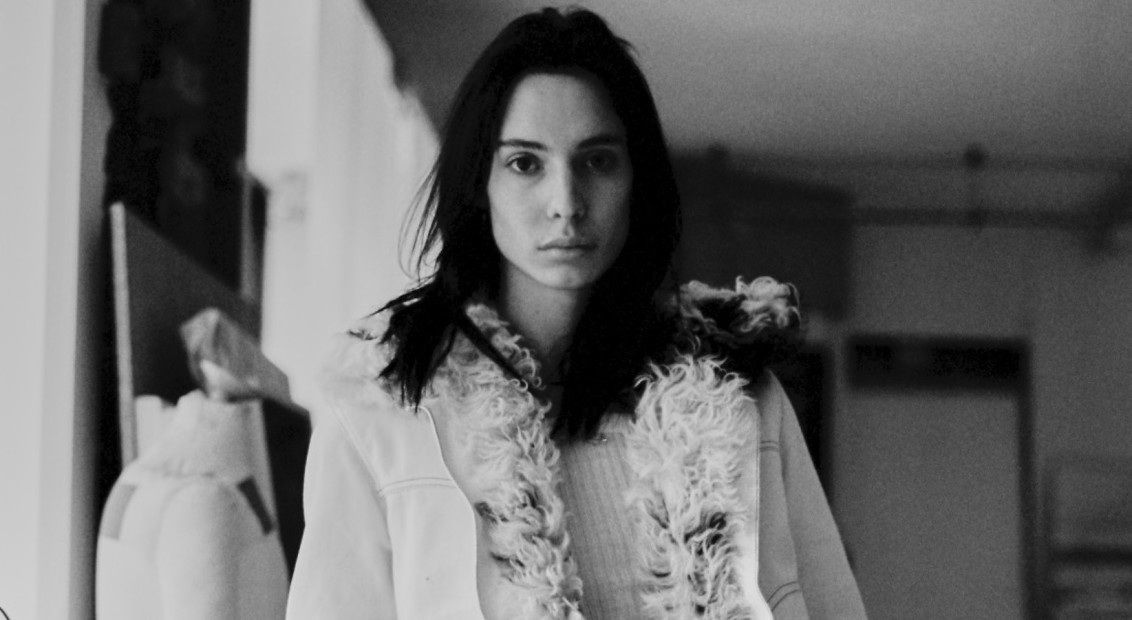 “She’s going to the club. It’s snowing outside so she’s got her fur coat on, but she’s come from her mate’s house and forgot her shoes so she’s had to wear her school shoes.” Daniel w. Fletcher is describing one of the personalities behind his new debut womenswear line, outlining one particular look that consists of a shearling jacket and matching bag, checkerboard short skirt and black loafers. Her nude socks pulled just below the knees – you heard him, it’s cold out there!

It’s an image of a woman Fletcher knows well – one most of us will, in fact – and one that perfectly reflects the way the designer creates; pulling references from his own experiences of British culture into his creations. So, on deciding to launch a dedicated womenswear line, he already had a woman in mind: an amalgam of all the strong, positive, vibrant women he has always held dear. 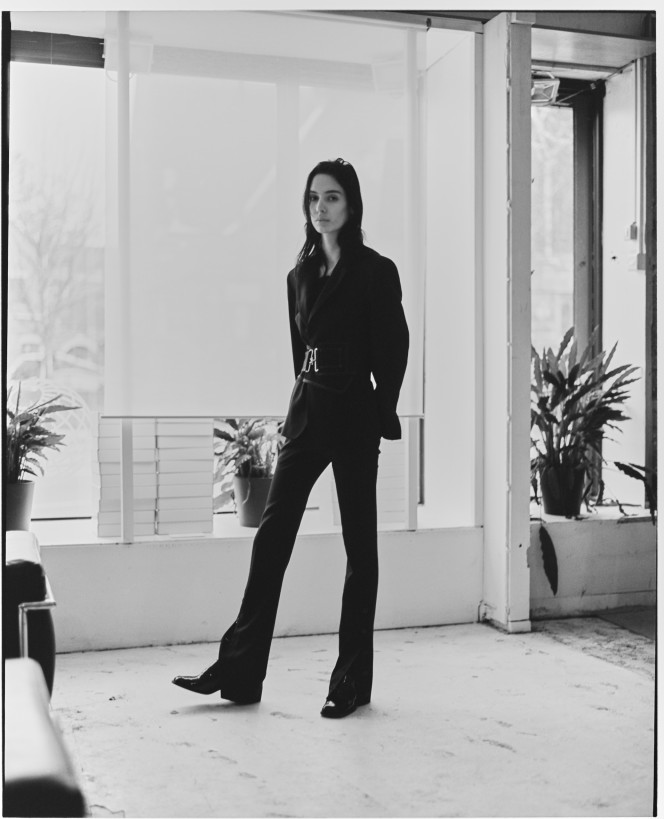 But why choose one of the fashion industry’s – and wider – most uncertain periods to  launch an entire new line? “I think actually not having the pressure of the traditional schedule and the way things work has pushed me to do this,” Fletcher responds. “One of the things that came out of last year was that I’ve become much closer to my customer, and I realised that there was this huge womenswear customer that were already buying the collection. A couple of weeks ago we got a model in and started trying all the menswear from my archive on her.”

Using his menswear archive as a starting point, Fletcher began translating signatures to a women’s silhouette. The split hem trousers are there, this time cut into tapered trousers with a large waist buckle fastening, while top-stitch denim returns in collared reversible jackets (white denim or lush shearling), and a nod to British culture, heritage and craft is prominent as ever: see the merino wool knits produced in Yorkshire, and one particular broad-shouldered outerwear piece named the Diana coat: “we imagine her wearing this big oversized coat over the top of her gym clothes running to a car.” 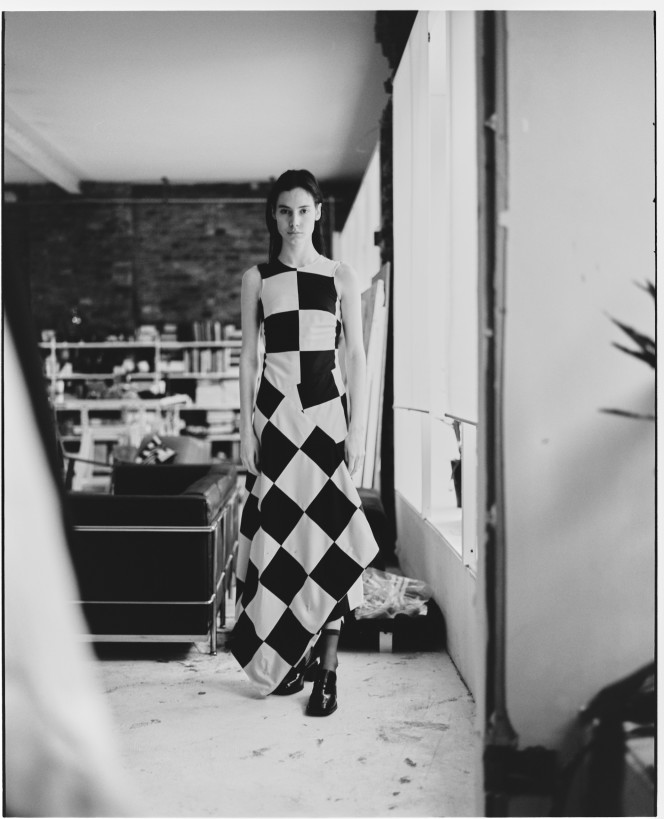 Throughout, Fletcher’s ubiquitous tailoring is deconstructed and reimagined with slim proportions and metal hardware fastenings – “it’s also about defining this new way of feeling sexy, it doesn’t need to involve loads of flesh being on show.”

But while sharing some sensibilities with the Daniel w. Fletcher man, his woman has her own stride. “There are these workwear influences as well, like the cotton twirls, but there’s also a slightly military touch to it as well, these jumpers with the satin shoulder pads,” the designer says, highlighting a thick knit navy jumper punctuated by metal ringlets. Notice also the nurse clips and firefighter-esque buckled coat. Equestrian references are also prominent, from a lambs leather riding jacket to checkerboard pieces resembling racing flags. 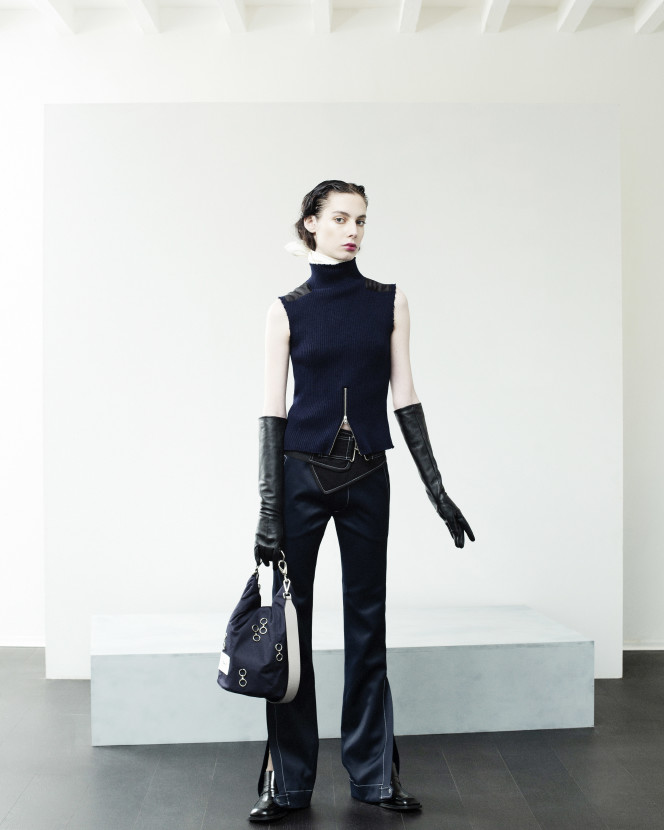 A more recent trait that began out of necessity during lockdown but has become a key development in Fletcher’s work is his commitment to sustainability by reusing leftover fabrics and scraps within new collections – literally weaving a throughline across his catalogue. “Patchworking is something that actually started for me in the first lockdown,” he says. “I was trying to find ways to use up all the scraps and leftovers on the studio floor from the previous season. It’s become part of the brand that we’ll always do. We’ve actually just done cushions for the website because we had tiny little bits left over, so I was like, “Let’s do some one-off pieces.” I think if we don’t continue to find new ways of using materials and recycling, then there’s no point because we won’t have a fashion industry to even create things for in the future.”

And Fletcher has already got his most important stamp of approval: his mum’s: “she’s after this jacket actually,” he says, pointing out the black-and-white shearling jacket mentioned at the top of this article, “typical northern woman, she loves a bit of animal print.”