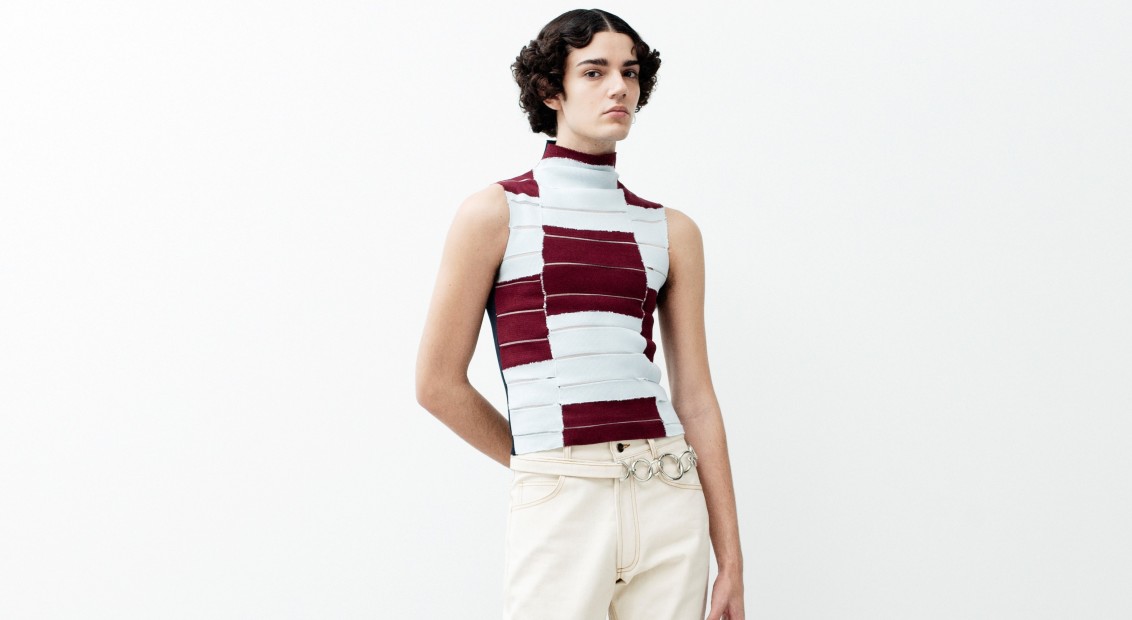 In a strange sort of way, the disruption of the last six months has brought a galvanising effect for Daniel Fletcher. This is of course testament to him and his team, but also the structure of his eponymous brand and the ideals it embodies. Back in June, for his first lockdown collection, Fletcher’s emphasis on local manufacturing meant he was able to hold Zoom calls with his team of seamstresses, all of whom are UK-based. The decision to move his brand off-schedule also paid dividends, giving much-needed agility in the face of new challenges and more opportunities for sustainable production.

For his latest collection, Fletcher once again gives the impression of having balanced the formula, of humming cogs fully aligned. Lockdown has given an acute sense of what he misses most, and this collection is license to indulge. From live music to dressing up, it’s a big middle finger to the loungewear we’re currently all cocooned in, with streaks of satin and silk that pay homage to early Mick Jagger. The studio scraps that brought such thoughtful ingenuity to his previous collection return, fused together in dazzling patchworks that comprise full looks and blankets. And just to underscore the rude health of his brand, a first bag, a sort of duffle/bucket hybrid crafted with all the savoir-faire and sense of heritage we have come to expect from Fletcher.

Below, the designer talks us through some of the collection’s finer points. 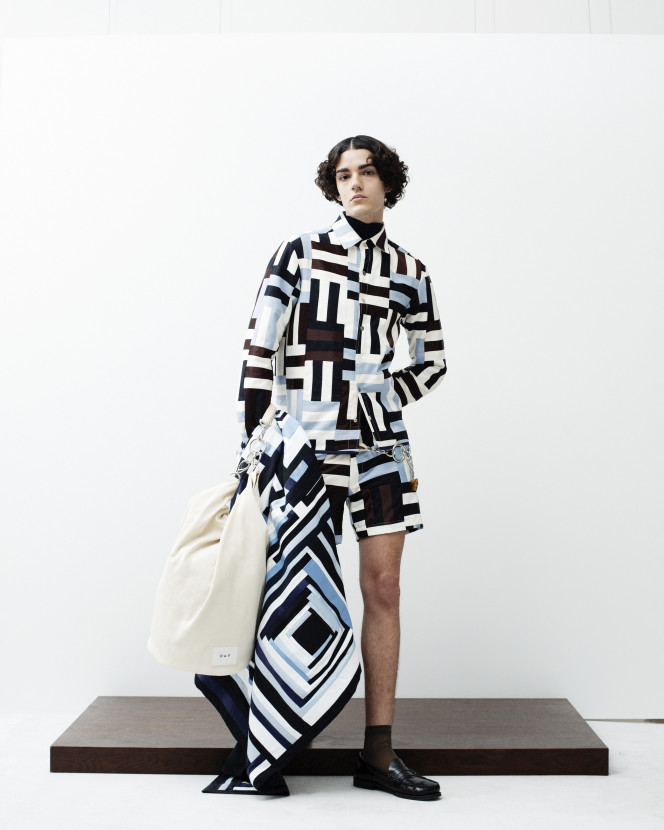 “I often look to the late 60s and early 70s for inspiration, Mick Jagger and The Rolling Stones always frequent my moodboards and this season I really delved into that era. I thought a lot about my friends who are musicians and haven’t been able to play live and have released records during lockdown and I wanted to make this collection a tribute to them. As a designer, I’ve been able to find new ways of working and showing my collection but not much compares with a live music event.”

“I’m always looking for ways to reduce my waste, and this season I just went a bit further with it, I’ve used even the tiniest scraps and off-cuts from production and sampling to make these patchwork pieces and some one-off quilts. It means no piece is the same, I’m sort of forced to make it work which can be challenging but also results in a more creative result I think.

It also makes these pieces more special because they are impossible to replicate, there can be variations of a similar theme but no two can be the same, and once that waste is used up it’s on to the next.”

“As a designer, I’ve been able to find new ways of working and showing my collection but not much compares with a live music event.” 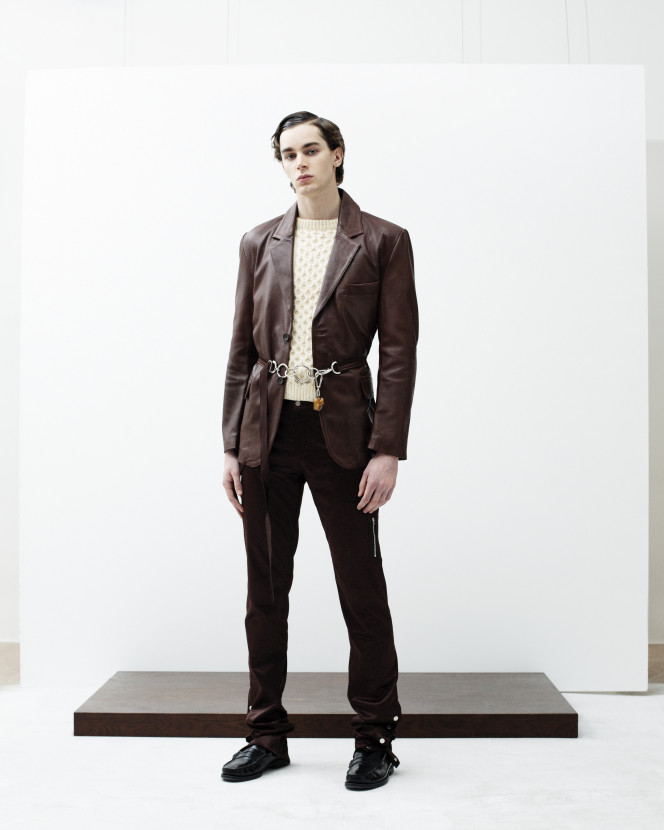 On the contrast between fabrics and textures...

“I wanted this collection to feel a bit sexier, I’m sure everyone is as fed up as me of work-from-home looks, I really miss dressing up and going out and the silks and hardware helped to achieve that. I think you always need highs and lows in a collection, the contrast between the soft silks, the metal hardware and leather brings balance.”

On creating his first bag for Daniel W. Fletcher...

“I used to design bags at Louis Vuitton so I’ve been a bit scared of going into it myself, once you go from having the best resources in the world to execute your designs (as was the case at LV) nothing else really compares. But I think they are an important part of a wardrobe, which is something I’m really focused on now; building that DWF core wardrobe, and the brand has been going nearly five years now so it felt like the right time.

This first bag, the ‘IT’ bag we are calling it (named by my stylist Ben [Schofield] who’s really keen for me to create my own Telfar bag) mixes tradition and function in its duffle shape but the metal chain strap takes it to a new place.” 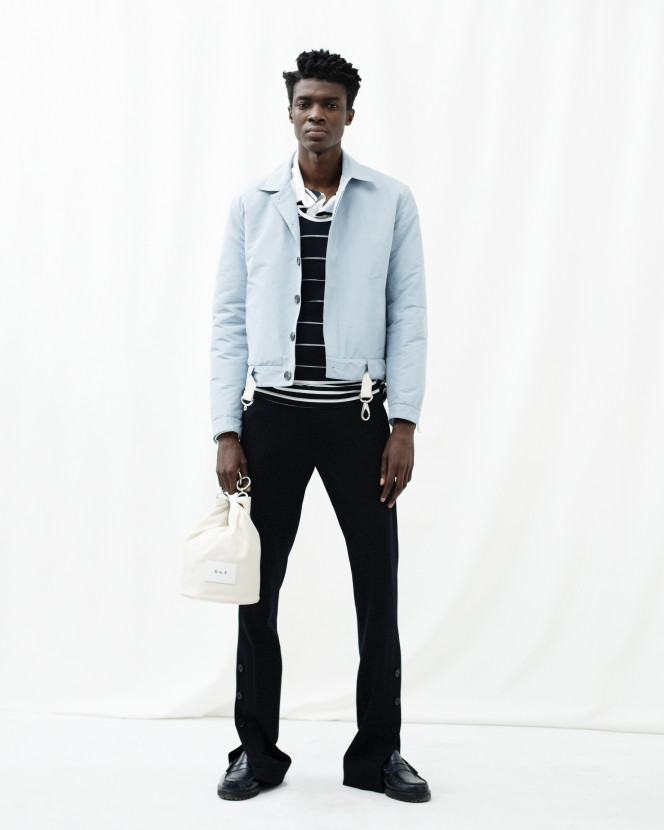 On creating during lockdown and the importance of adapting...

“I think it’s so important for all brands to learn from the last year, to use it as an opportunity to re-set the system and the way they work. To be more aware of the planet, how much they are producing and also working to a schedule that works for them.

I’m working more locally than ever before now, with independent seamstresses and British mills in order to make the collection and also focusing more on my direct to consumer business. It all feels so much more real, more personal and the right way to be running my brand.”