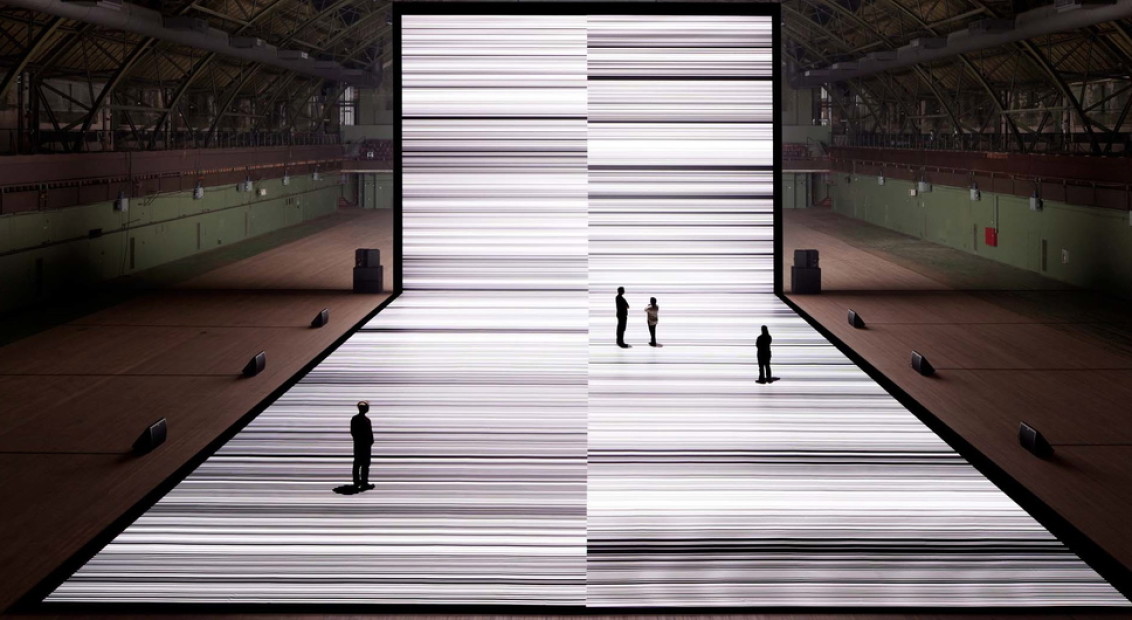 Anyone who has been sent cross-eyed by Ikeda’s widely exhibited Test Pattern series can attest to the genius of the work. Ikeda uses a real-time computer program to convert text, sound and photography into ‘data’, which plays out on an electronic floor in binary form like a barcode convulsing with blindingly hypnotic strobe flashes. Don’t expect to be cutting any moves though, Ikeda accompanies the visuals with an audio track equivalent to diploma-level musical maths. Playing with things like the number of hertz in a musical interval or sound wave integers at the furthest reaches of human hearing, Ikeda crafts a soundscape to amplify the visuals and drag you further under his spell.

As a work of art it is both minimal and monumental, testing the limits of human perception by over-running the senses and re-calibrating them into a monochrome, trance-like state. Between the face-melting effects of light that flashes 100 times a second and the meditative serenity it paradoxically induces, Ikeda opens the possibility for different ways of seeing the world and ourselves.

This ability to trigger raw and experiential stimulation is at the core of what makes Ikeda’s work so universally appealing. Despite his esoteric production methods and techy composition process, which often draws on complex, data-driven algorithms to produce audio-visual output, Ikeda is fascinated by spectacle, giving his work broad appeal and a sense of communal wonder.

Though he considers himself primarily a musician, Ikeda’s visual art is so interwoven with his interest in sound that the two are often impossible to distinguish. Take his 2006 Datamatics project for example. Another hypnotising display of data-driven acrobatics, this time using patterns derived from hard drive errors and studies of software code to project the experience of flying through the universe, set to a cacophony of cosmic sounds. This idea of embracing the infinite is useful for understanding Ikeda’s work more generally: a probing investigation into the unknown and immeasurable, a voyage to the borderline of human perception that brings hair-raising encounters with the sublime.

Produced in collaboration with ground-breaking public arts organisation Artangel, Ikeda’s 2014 public commission embodied the artist’s ability to conjure collective awe with ethereal minimalism. To commemorate 100 years since the outbreak of the First World War, the artist shone a giant beam of light into the sky for seven nights using 49 powerful spotlights stationed next to Parliament. Part interstellar messaging service, part divine spectacle, the light appeared to stretch to infinity, and was visible from twelve miles away.

At ground level, the public were encouraged to visit the lights in Victoria Tower Gardens and walk between them. Accompanied by Ikeda’s soundtrack, a typical assemblage of space gargles and cosmic blips, close proximity to the light offered a moment of immersive escapism. Further away, where the light appeared more solid and totem-like, the effect was more sombre and reverential, giving silent moments of private reflection to millions of people. 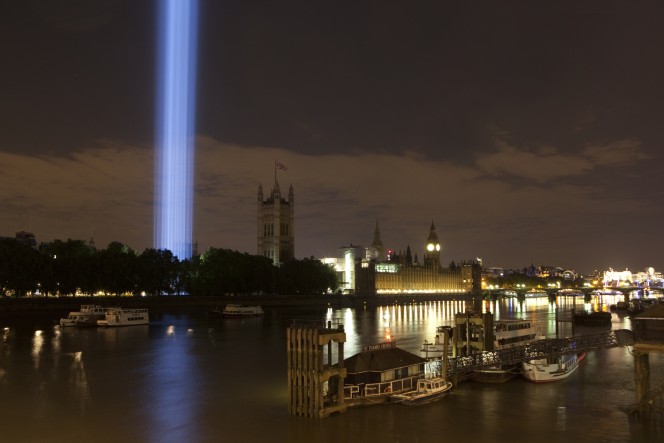