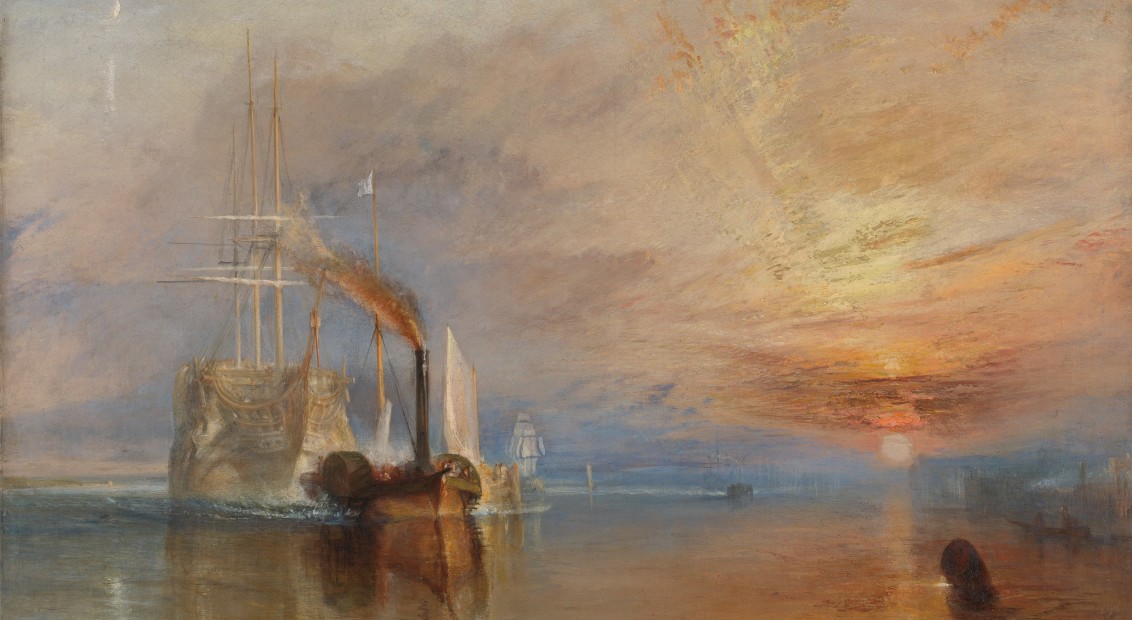 The Fighting Temeraire: the true story behind William Turner’s most beloved painting

Ahead of Tate Britain’s landmark new exhibition Turner’s Modern World opening this week, we dissect one of the artist’s best known and most beloved works, The Fighting Temeraire, uncovering the inaccuracies behind the painting and ultimately, questioning whether they even matter.

Completed by Turner in 1838, The Fighting Temeraire was first displayed at the Royal Academy where it was considered, “As grand a picture as ever figured on the walls of any academy, or came from the easel of any painter.” The image shows a specific historical incident; described in the title of the painting as, ‘The Fighting Temeraire being tugged to her last berth to be broken up’.

When it was launched in 1798, the HMS Temeraire embodied the pinnacle of British ship-building. 180-feet long, made from English oak and armed with 98 guns, she was one of the largest warships of the period. The ship’s mythical status owes much to its role in the British victory at the Battle of Trafalgar (1805), during which she played a decisive role, at one point saving the fleets’ flagship, the HMS Victory. For this reason, the Temeraire became a symbol of military prowess that endured throughout the 19th century.

In the years following the battle, the Temeraire was slowly retired from naval service, until in 1838, it was auctioned off to be broken up – a natural end for wooden ships, whose materials would be removed and collected for various purposes. It was for this reason that, on the 5th of September 1838, the Temeraire was transported from its station at Sheerness, down the River Thames, eventually reaching its final resting place at the breakers’ yard in Rotherhithe, in south-east London. 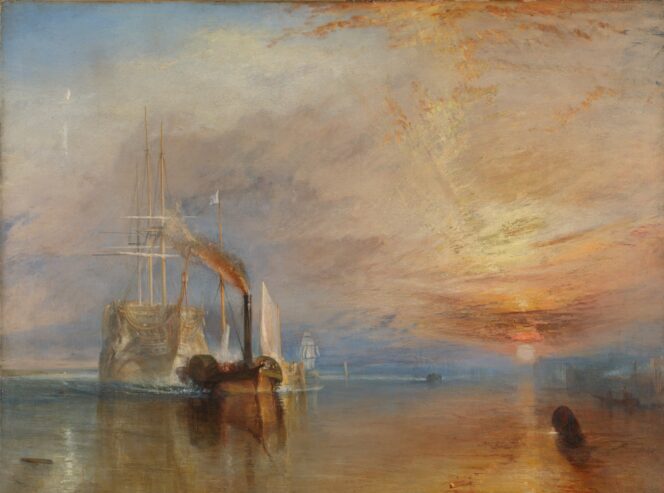 The Fighting Temeraire tugged to her last berth to be broken up, 1838, Joseph Mallord William Turner, The National Gallery, London ©

Turner would have certainly been aware of this journey at the time. It was widely reported in the newspapers, and there is anecdotal evidence that he witnessed it first-hand. His painting is therefore, a reproduction of this specific historical event: we see a small steam-powered tugboat pulling the famous ship along its last voyage. In the background there is the River Thames, stretching out into the distance, and behind it the setting sun. And yet, despite Turner’s historical proximity to the event, there are a series of details in the painting that we know to be incorrect.

The first is the ship itself. According to Navy Board records, in July 1838 the Temeraire’s upper masts were removed at Sheerness, shortly followed by the lower masts, which were removed the following month. This all happened prior to the ship being moved to Rotherhithe, meaning that, at the moment Turner chooses to portray, the Temeraire would not have been fully-masted.

The second problem concerns the tugboat that we see pulling the famous ship. We know that the Temeraire was pulled, not by one tugboat (as Turner shows here), but two – the London and the Samson. On top of this, Turner has chosen to portray the tugboat with its chimney at the front of the vessel, and its mast at its rear. This is anachronistic. Tugboats of the period would have had funnels directly above their engines. A more realistic representation of the tugboat can therefore be found in J.T Willmore’s later engraving of Turner’s painting, in which he has moved the tugboat’s funnel into its correct place at the rear.

“As grand a picture as ever figured on the walls of any academy, or came from the easel of any painter”

The third and final problem is the sunset in the background of the painting. If the sun sets in the west, and if the Temeraire is travelling westwards along the river from Sheerness to London, then the sun would be setting in front of the two ships, not – as is seen in Turner’s painting – in the background.

At this point, you could be forgiven for considering this dissection pedantic – why does it matter if a painting is historically accurate or not? In many ways, you’d be right. Historical paintings have always altered, invented and manipulated events to convey certain messages. In other words, historical truth is subordinate to artistic representation and for this reason, Turner’s doctoring of the truth fades into insignificance.

By analysing historical inaccuracies in the Temeraire painting, we can understand how and why certain artistic decisions were made. For instance, by leaving the masts on the Temeraire, Turner is able to better evoke a sense of the ship’s history – the way it would have looked in its heyday. This also constructs a more visually appealing triangle between the three focal points of the image. 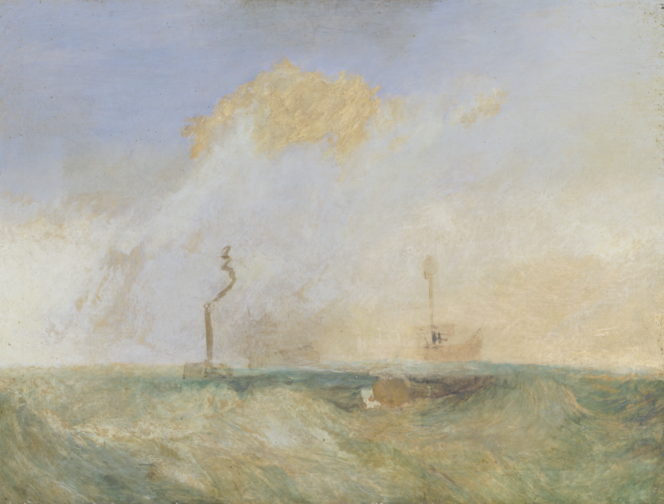 Steamer and Lightship, a study for The Fighting Temeraire c. 1838-9 by JMW Turner

Likewise, the chimney on the tugboat was probably placed at the front to avoid obstructing a clear view of the Temeraire, which is, of course, the most important part of the painting. Finally, by placing the sunset behind the general scene, Turner conveys a deeper metaphorical meaning: of the sun going down on British naval tradition.

This forms the central symbolism of the painting. Turner believes the era of wind and sail, characterised by a ghostly view of the Temeraire, is being supplanted by the age of coal, fire and steam – represented by the tugboat, which feels contrastingly heavy and metallic. In short, Turner is commenting on the nature of historical change and the arrival of the Industrial Revolution.

Although the central message of the painting is clear, the emotional substance of the scene is harder to discern. To some, the Temeraire’s final journey is a glorious one, it relates a sense of heroism, of military victories and courage in battle. Others have seen something darker in the image. The art critic John Ruskin often spoke of Turner’s propensity to paint evocative, blood red skies (seen in The Slave Ship, 1840). In The Fighting Temeraire, the streaks of red in the sunset hint at the appalling bloodshed that would have taken place aboard the ship throughout its long military career.

“By placing the sunset behind the general scene, Turner conveys a deeper metaphorical meaning: of the sun going down on British naval tradition.”

In some ways, the emotional ambiguity of the painting speaks to Turner’s powers as an artist. Somewhere in its blaze of colours and indistinct form, the painting is able to convey profound and diverse themes that are central to the human experience: those of mortality and change, technology and progress, heroism and brutality – all condensed into a single image.

It is this depth and complexity in his painting that ranks Turner among those gifted artists from different nations and distant periods in time, who are able to make art that is not simply accurate, or evocative, or aesthetically pleasing, but truly great.