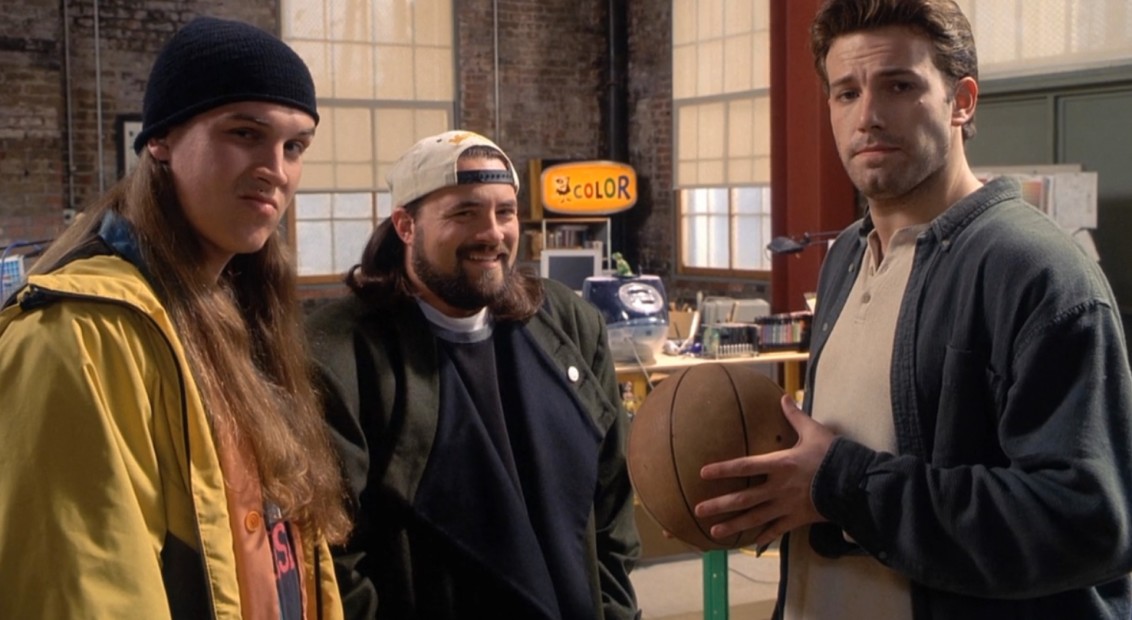 Kevin Smith: welcome to the View Askewniverse, full of slackers, mallrats and stoners

Breakthrough in a convenience store

In the early nineties, Kevin Smith flogged his comic book collection, maxed out several credits and cashed a check he’d gotten from FEMA for storm-related property damage to make his debut movie Clerks. Luckily, the gamble paid off, with Smith making one of the most loved slacker comedy movies ever and a pristine example of how great independent filmmaking can filter into the cultural collective consciousness.

Previous to that, the New Jersey-born filmmaker dreamed of writing for Saturday Night Live and spent his time skipping classes at The New School to lurk around at 30 Rock hoping he could catch a break. It wasn’t meant to be and Smith dropped out of college after his first semester and got a job as a clerk at a conjoined video store and Quick Stop in Leonardo, New Jersey – fans of Clerks will see where this is going. It was seeing Richard Linklater’s 1990 film Slacker on his 21st birthday that proved the lightbulb ‘ping’ moment for Smith, showing him that “movies didn’t have to blow up the Death Star – they could just be a snapshot of where you were in life,” Smith told The Guardian in 2019. Applying this ethos, Smith took what he knew – working in convenience stores around New Jersey – wrote it, filmed it and sold it to Miramax, who helped fund a budget of $27,575 (around £18,485). The film went on to make over three million dollars at the box office and became the touchstone of Smith’s career. 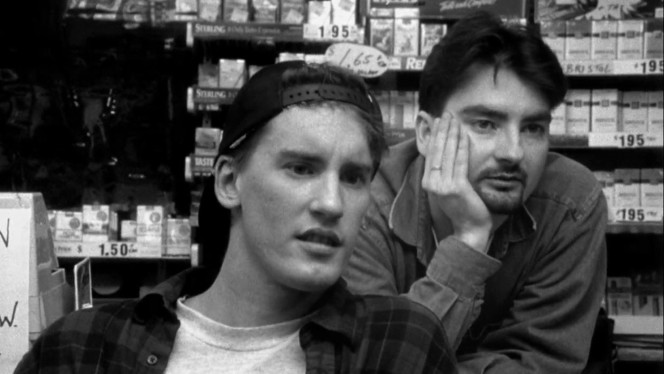 With Clerks, Smith didn’t just create one of the most celebrated indie films of the 90s, he created his own cinematic universe: the View Askewniverse. Way before Marvel, Smith set out a world that crisscrossed from film to film, intertwining stories and characters across his subsequent films. Named after Smith’s production company created for filming Clerks, the View Askewniverse extends across films, comics and TV series, populated by recurring characters, motifs and strange habits all located in central New Jersey.

Time for a quick tour of the View Askewniverse citizens and traits.

Perhaps the most recognisable and well-loved characters within the Askewniverse are the moronic (yet occasionally genius) duo of Jay and Silent Bob, portrayed by Jason Mewes and Kevin Smith himself as the (mostly) mute sidekick. First appearing in Clerks, the eponymous pair hang out at their primary spot outside the Quick Stop, dancing, dealing, harassing pedestrians and stealing food from the store. From here, the misfits pop up in numerous projects by Smith, including Mallrats (1995), Chasing Amy (1997), Dogma (1999) and – of course – the Jay and Silent Bob movies.

In the View Askewniverse, the Bluntman and Chronic comic is vitally important. Established in Chasing Amy – Smith’s twist on traditional rom-coms – the two creators of the comic are the film’s protagonists, who based the titular characters of the publication on the infamous Jay and Silent Bob (see how it all links?). While in Jay and Silent Bob Strike Back, Miramax has bought the rights to the comic with plans for a film adaptation, much to Jay and Bob’s dismay. And to get a little meta over here, the comic actually exists and Kevin has written several issues, depicting Jay and Bob winning the lottery and becoming superheroes.

It’s fair to say that Ben Affleck would not be the Ben Affleck we all know today without Kevin Smith. Having started out as a child actor on the TV circuit, Affleck was searching for more impactful roles when Smith cast him in Mallrats as Shannon Hamilton, the manager of Eden Prairie Mall’s Fashionable Male clothing store and the arch enemy of local mallrat Brodie Bruce. Having struck up a friendship during filming, Smith not only gave Affleck the lead role in his next movie, Chasing Amy, but also let him crash on his sofa during filming. Between 1995 and 2006, the pair made six films together: Mallrats, Chasing Amy, Dogma, Jay and Silent Bob Strike Bob, Jersey Girl, and Clerks II.

Taking the essence of Clerks and running with it, Smith went on to flesh out his View Askewniverse with his first studio movie, Mallrats, which saw the filmmaker build on his initial work with financial clout. Starring Beverly Hills 90210 star Shannon Doherty alongside Clerks heroes Jay & Silent Bob, the film centred around a group of teens who roam a New Jersey shopping mall. While shifting away from Clerks’ off-the-hoof aesthetic and towards a more glossy finish, the film maintained the quirky stoner feel that first propelled Smith to fame – cue a topless psychic, a game show sabotage and a Spike Lee cameo. 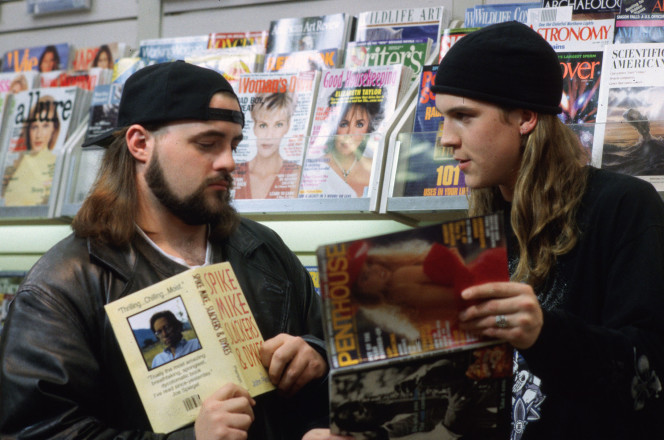 Having established himself as a king of small-town slacker indie, the third film in Kevin Smith’s View Askewniverse series, Chasing Amy was a commercial as well as a critical success. Grossing over $12 million on a $250,000 budget, it garnered positive reviews and won two Independent Spirit Awards. Half rom-com, half buddy movie, Chasing Amy saw Smith redefine the boy-meets-girl formula through his own unruffled voice. Using his own two-year romantic relationship with the film’s star Joey Lauren Adams as inspiration, Smith cast Ben Affleck in his first major role as comic book artist Holden McNeil (“The character of Holden is the closest to me I’ve ever written” Smith since said). Oh, and Jay & Silent Bob make it into another Smith cast. 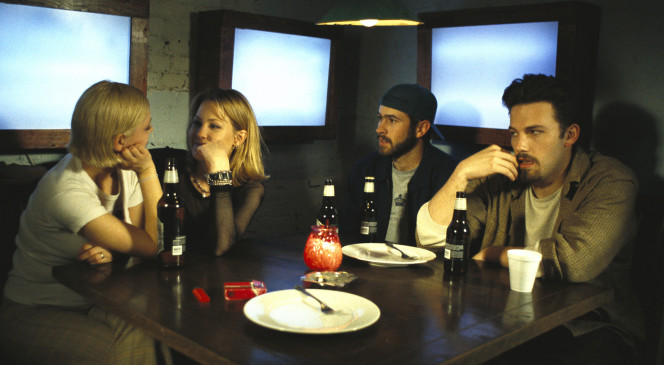 What to watch by Kevin Smith: