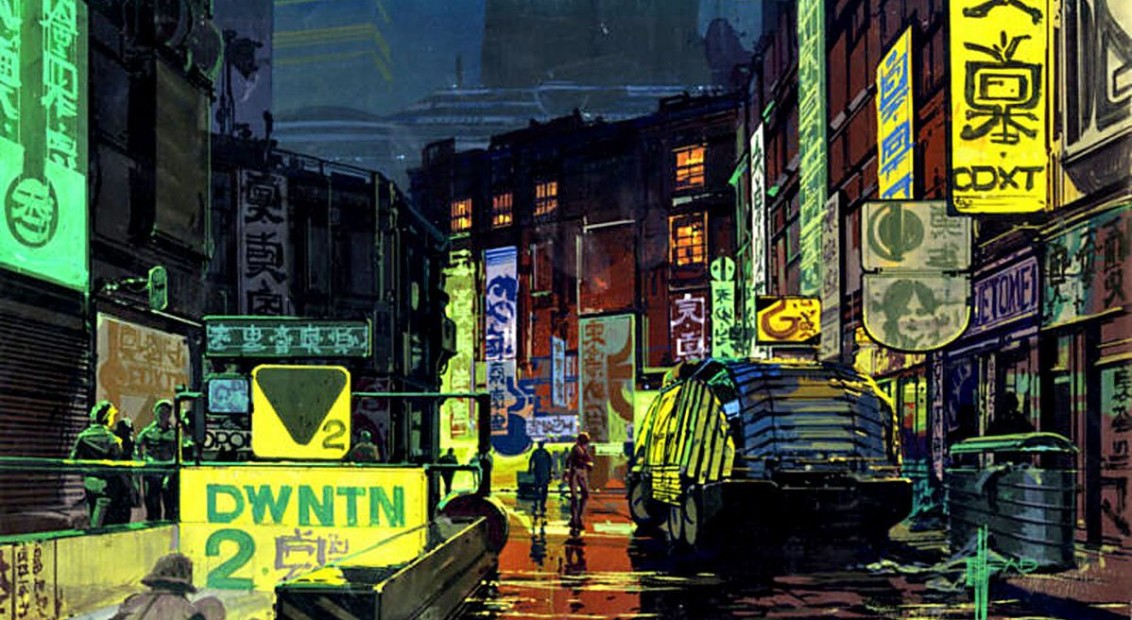 Jean Giraud, better known by his pen name Moebius, remains one of the most influential cartoonists of all time whose signature blend of psychedelic fantasy and surrealism formed the aesthetic blueprint of modern sci-fi. Working in the Franco-Belgian style of bandes dessinées, popularised by The Adventures of Tintin and Asterix, Giraud’s seminal contributions ushered in a new age for comics and the visual arts generally.

After he died in 2012, Jean Giraud was mourned by the likes of Ridley Scott, Hayao Miyazaki, George Lucas and Stan Lee, whose respective careers had all been touched by the French artist’s work. From the latter half of the 20th century until today, Giraud’s signature style has become so widely imitated that signs of its influence are virtually impossible to distinguish from the norm. As Ridley Scott noted in 2010, “You see [his influence] everywhere, it runs through so much you can’t get away from it.”

Born in a Parisian suburb on the eve of World War II, Giraud endured his parent’s messy divorce at a young age. The experience would leave a profound psychological trauma Giraud later claimed lay behind his choice of separate pen names. His passion for Westerns (which he consumed in the form of B-movies at a local theatre) grew alongside his interest in art, and at sixteen, Giraud was producing Western comics at art college, much to the dismay of his teachers.

Two experiences, first in Mexico and then Algeria (while on military duty), proved hugely influential in honing Giraud’s early Western style. Vast blue skies arcing over endless arid plains piqued his imagination, resulting in a number of early Western-themed works that would ultimately serve as stylistic precursors to his later Blueberry creation. During this period, the influence of Joseph ‘Jijé’ Gillain, then one of Europe’s foremost comic book artists, was also key. Jije was responsible for pioneering the Atom Style in comics, a new aesthetic that broached the emerging modernity of the 50s with a sense of dynamic optimism, presenting an imagined future that excited and entertained. 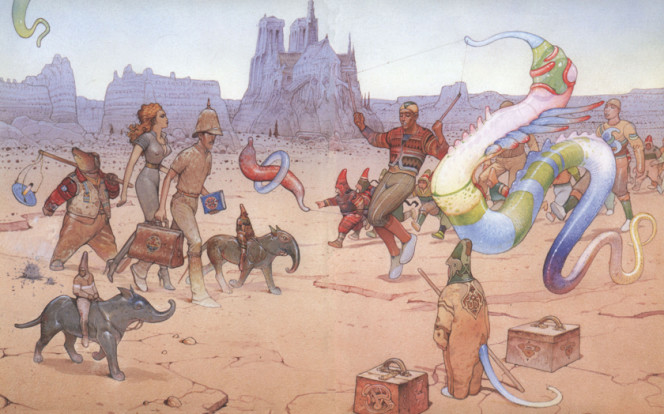 In 1963, with a style that still closely resembled that of his mentor, Giraud created Fort Navajo with Belgian scriptwriter Jean-Michel Charlier. The immediate success of lead character Blueberry – a hard-nosed, cigarillo-chewing cowboy – led Giraud to create an entirely new comic, with Blueberry as its central titular character. Blueberry represented a radical departure from conventional archetypes, this was no ordinary chisel-jawed cowboy bursting through saloon doors and facing off against outlaws in tumbleweed alleys. Despite drawing heavily from American traditions and pulp fiction, Blueberry more closely resembled a European anti-hero (his appearance was based on French screen icon Jean-Paul Belmondo), capable of flawed decisions and skewed morals.

Leaving the series as publisher in 1974, Giraud sought new challenges that would allow him to explore his Moebius alter-ego. After a brief involvement in Alejandro Jodorowsky’s fabled, yet ultimately doomed, Dune project (which was set to star Orson Welles alongside Salvador Dali, with a soundtrack by Pink Floyd), Giraud co-founded Metal Hurlant (translated in English as Heavy Metal) in 1974, a magazine that in both style and substance transformed the reputation of comic books. With its large-scale, psychedelic visuals, printed on high-grade paper stock, the publication breathed new life into a genre dismissed by critics as lacking artistic credibility and otherwise dominated by cheaply produced American superhero comics. Unlike anything else at the time, Metal Hurlant’s richly layered narratives tackled adult themes, attracting wider audiences to a medium previously marketed exclusively at young adolescents.

Leaving painted scenes of the Old West behind (and with it the identity of Jean Giraud), Moebius created exotic visions of the future with a pen. These fantastical realms of imagination drew from the work of H.P Lovecraft, yet in their innovative style introduced an aesthetic style that has since been mined by Star Wars, Mad Max, Alien and Blade Runner as well as anime classics like Hayao Miyazaki’s Nausicaä of the Valley of the Wind (1984) and Katsuhiro Otomo’s Akira (1988). Along with the magazine’s co-founders, Moebius helped establish Metal Hurlant as a symbol of artistic innovation, producing imagery that was not only unprecedented within the world of comics but the visual arts as a whole. 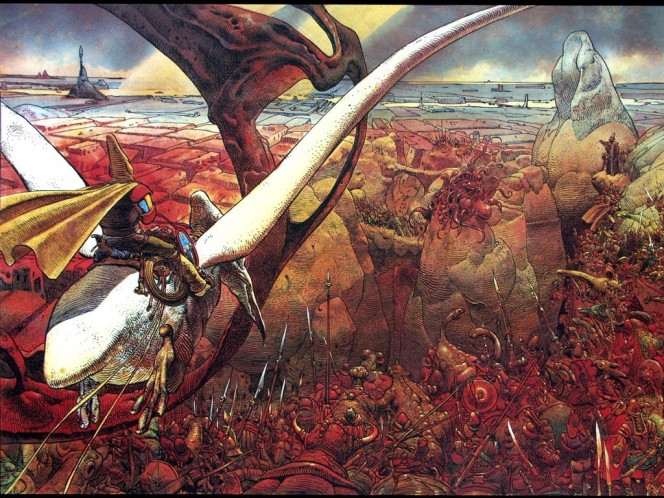 After key roles in designing the look of Ridley Scott’s Alien (1979), Blade Runner (1982) and Steven Lisberger’s Tron (1982), Giraud’s move to California in the mid 80s was little more than a formality. Stateside he was known almost exclusively under the alias of Moebius and so it was at this point he dispensed with the name Giraud in his work, given that his fame outside of France and Belgium was almost entirely derived from Metal Hurlant and its alter-ego creator.

In 1988, Moebius collaborated with Stan Lee on a Silver Surfer miniseries, for which he won an Eisner award the following year (the comic book industry equivalent of an Oscar). Moebius’ Silver Surfer was later immortalised in Tony Scott’s 1995 submarine thriller Crimson Tide, starring Denzel Washington and Gene Hackman. In one scene, a heated argument breaks out over whose iteration of the Silver Surfer is best: Jack Kirby’s or Moebius’. The reference was no doubt partially derived from the Scott brothers’ shared appreciation of Moebius’ work, but even more significant was the script’s supervisor, a certain Quentin Tarantino, who was a longstanding fan of the artist. 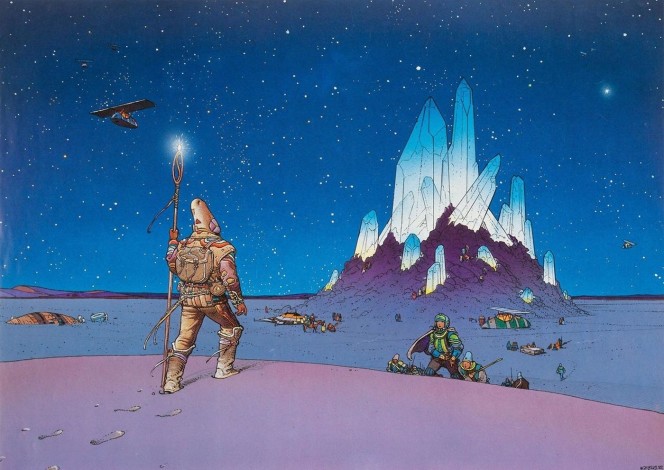 This particularly significant edition of Metal Hurlant typified the publication’s proximity to dark, disturbing tales told with a surreal, cyberpunk style. The plot involved a young blind boy, wandering through a desolate dreamscape accompanied by his pet eagle. The eagle is tasked with hunting out a fresh pair of eyes for the boy, which it takes from a stray cat and returns to its master, only for the boy to reveal his preference for the eyes of another child. 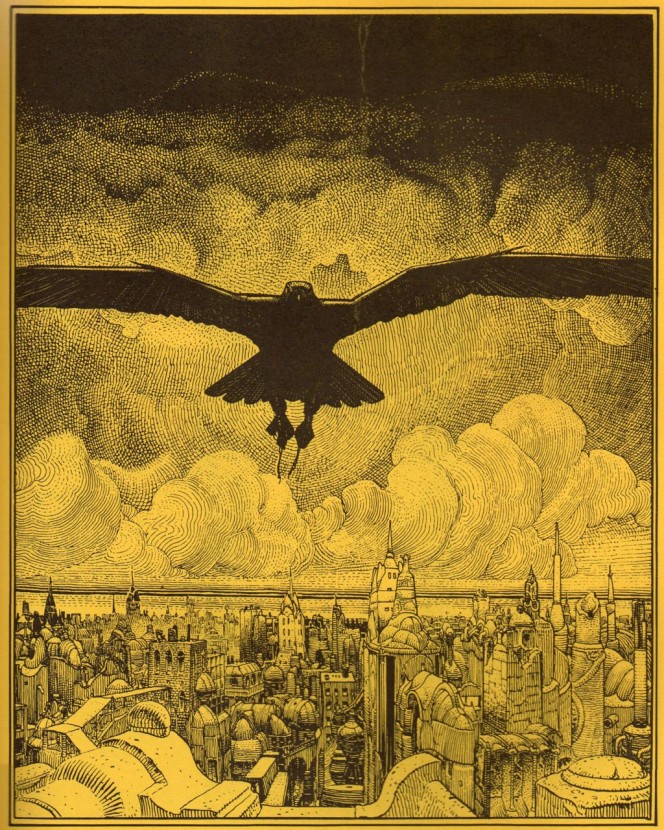 The comic marked the first collaboration between Moebius and Alexandro Jodorowsky, with the latter having first dreamed up the story’s gruesome plot as a form of therapy to help cure his depression following the failure of Dune. It was originally conceived with the founding members of Mouvement Panique (of which Jodorowsky was one), the Parisian collective that developed chaotic, avante garde performance art heavily influenced by the gory surrealism of Luis Buñuel.

Printed on yellow paper to accentuate the story’s immense level of detail, Eyes of the Cat echoed the style of wood engravings made by 19th-century French artist Gustave Doré, who Giraud became acquainted with during his childhood. With its somber plot and apocalyptic tone, the 54-page work marked a period of pessimism in the author’s life, during which many of his stories concluded with death and destruction.