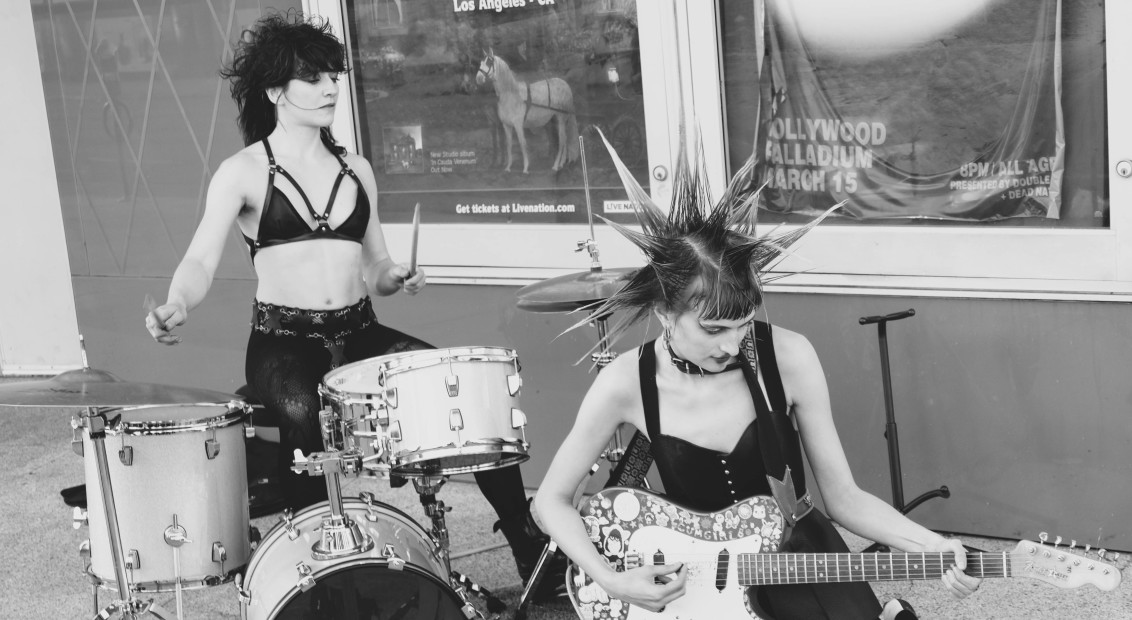 Listening to NYC trio cumgirl8 feels like going back in time and catapulting to the year 2040 all at once. It’s a heady, latex-clad future-nostalgia that’s part dial-up chatroom, part pioneering punk (see Kleenex and Delta 5), and three parts sex-positive dreamgirl from outer-space (those three dreamgirls being Lida Fox, Chase Noelle and Veronika Vilim).

We caught up with the band shortly after the release of their debut record and witnessed them rock up to LA to play a thumpin’ guerilla gig at the city’s iconic Palladium venue, attracting attention from the police and public alike – shown below via exclusive images and video. We dig. 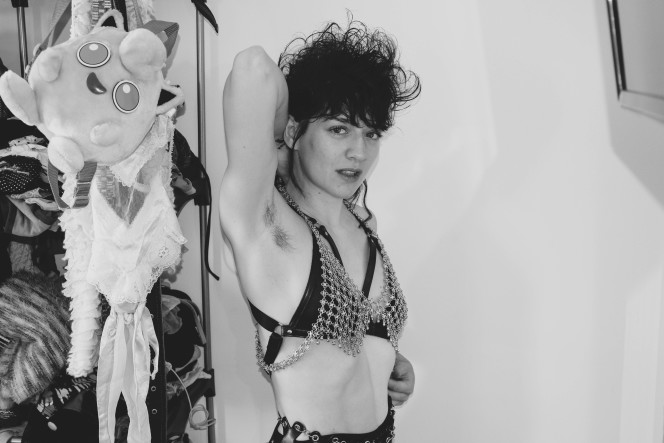 Madison Desler: First of all, congrats on the album, what’s it been like releasing it in the middle of quarantine?
cumgirl8: Thank you. It was such a bummer, we had to cancel so much. We would’ve been touring with Wacko right now, but also it’s been cool because we’ve found new ways to push our concept, beyond playing shows or even music at all – and quarantine has helped us realise that.

“It’ll be cool to look back and remember how far-out we were feeling at the time.”

MD: Your design aesthetic right now has that early internet, chatroom, dial-up feel our generation gets really nostalgic for, do you guys have any early internet memories? My sister and I begged our parents to get the internet just so we could go on the Beanie Babies website.
Veronika Vilim: [laughs] That’s awesome. An early memory was making a MySpace in fifth grade and posting a sightly risqué photo of myself (that a friend’s mom took with me) and then that whole scandal with MySpace came out about child stalkers on there. I had nightmares for years that some creepo was going to find me IRL.
Lida Fox: I remember going to a sleepover at a friend’s house with a group of girls from my dance school. I think we were around nine or ten, all just starting to go through puberty. After her parents went to bed we all crowded in a closet with the computer and played Sims and made them fuck each other. The classics.
Chase Noelle: My sweet midwestern grandparents found out I got fingered from an away message when I was in seventh grade and I’ve never recovered, lol. A big layer of cumgirl8 is how our coming of age was also the coming of the internet. All of our hormones were going crazy while everyone was using America Online, so our sexual identities are like, rooted inside of it – with the dial-up tone, the away messages, all of it. 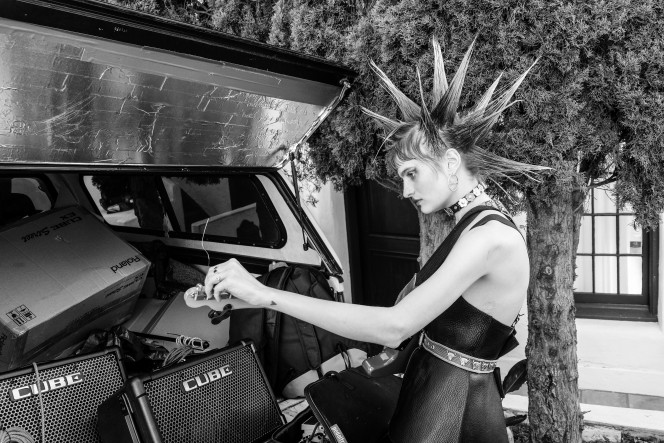 “A big layer of cumgirl8 is how our coming of age was also the coming of the internet. All of our hormones were going crazy while everyone was using America Online, so our sexual identities are like, rooted inside of it – with the dial-up tone, the away messages, all of it.”

MD: What made you want to start your YouTube series, The 1-900?
CG8: To fill a void, literally. It was so we could have a purpose during quarantine, especially when the idea of a “deadline” feels increasingly arbitrary. Remember how weird time felt in April? The 1-900 was an anchor. It’ll be cool to look back and remember how far-out we were feeling at the time. We have an incredible production team that’s kept us tethered. The icing is getting to expand the universe we’re creating, by finding freaks with similar minds and learning from them publicly. The 1-900 has helped us figure our shit out in multiple ways. The response we’ve been getting from people has been really beautiful and motivating.

MD: Is it something you want to continue once things start going back to normal?
CG8: Absolutely, and when we finally get to tour we want to incorporate it into our show, like a variety show with local guests and stuff.

MD: What can viewers expect from upcoming episodes?
CG8: We finished a third episode about alternate reality, but we shelved it because this is absolutely not the time to be escaping reality. The episode we’re working on right now is focused on BLM protestors in the cities that are less visible on the news; and an interview with a Futurist candidate for congress named Paperboy Love Prince. It’s coming out right before Primary Election Day in NYC.

MD: How do you think this period is going to affect the music industry/musicians long-term? Most musicians make the majority of their money playing live, do you think there’s going to be an attempt to shift to a more sustainable model?
CG8: Now that everyone is bored of Covid-19 we’ll probably see more outdoor shows this summer. We should design little bubble pods for each person in the crowd and wheel them to our shows. Long term, it feels like “radical ideas” are now a part of mainstream consciousness. There’s like, yoga pants girl memes about how police brutality, racism, transphobia, ableism, etc. are embedded in capitalism and colonization. The moderate left are waking up, corporations are being forced to acknowledge it. If we keep up our momentum, this music industry that’s been exploiting musicians should implode.

MD: Has it changed the way you approach making art, or the way you think of art?
CG8: We were mostly productive during quarantine, but the Black Lives Matter movement and abolitionist movement have changed everything for us. Rather than making something to be consumed, we want to create experiences to be engaged in. That’s the only thing that feels right. 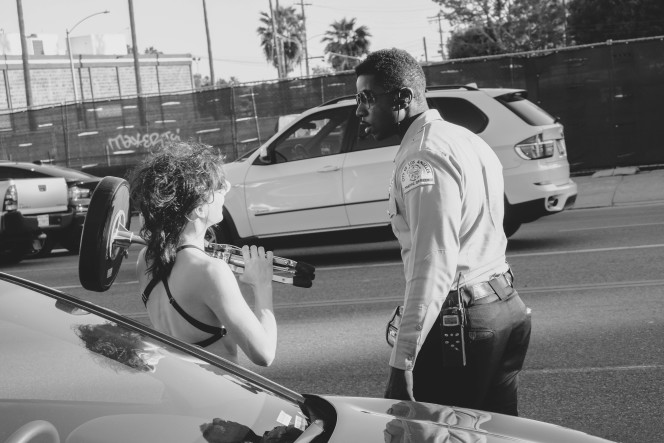 MD: Do you remember being inspired by certain musicians when you were younger (or even now), as far as style goes?
LF: Britney Spears and Spice Girls
CN: Gwen Stefani and Aaliyah.
VV: I’ve been a fan of David Bowie and Elton John, since I was a kid.  I remember dancing around my house to Crocodile Rock. Also ABBA were a big inspiration growing up. Now it’s Nina Hagan, the pointer sisters, Shampoo, strawberry switchblade, the b52’s, L7

MD: Has any of that found its way into your own stage looks?
CN: I liked Christina more than Britney… and now I’m obsessed with chaps. So yes?
LF: these days I’m most inspired by new, innovative designers like B Anele, Priscavera, Gauntlett Chang, everything at Cafe Forgot.
VV: Yes and no, personally. I like to wear whatever I feel the most confident and comfortable in so I like to make things based off how I feel rather than recreating anything, but yes their style does inspire me.

MD: Is there anything you guys haven’t tried yet but would like to?
CG8: VR is next!

All clothing above by Zana Bayne, Hardeman and Priscavera.