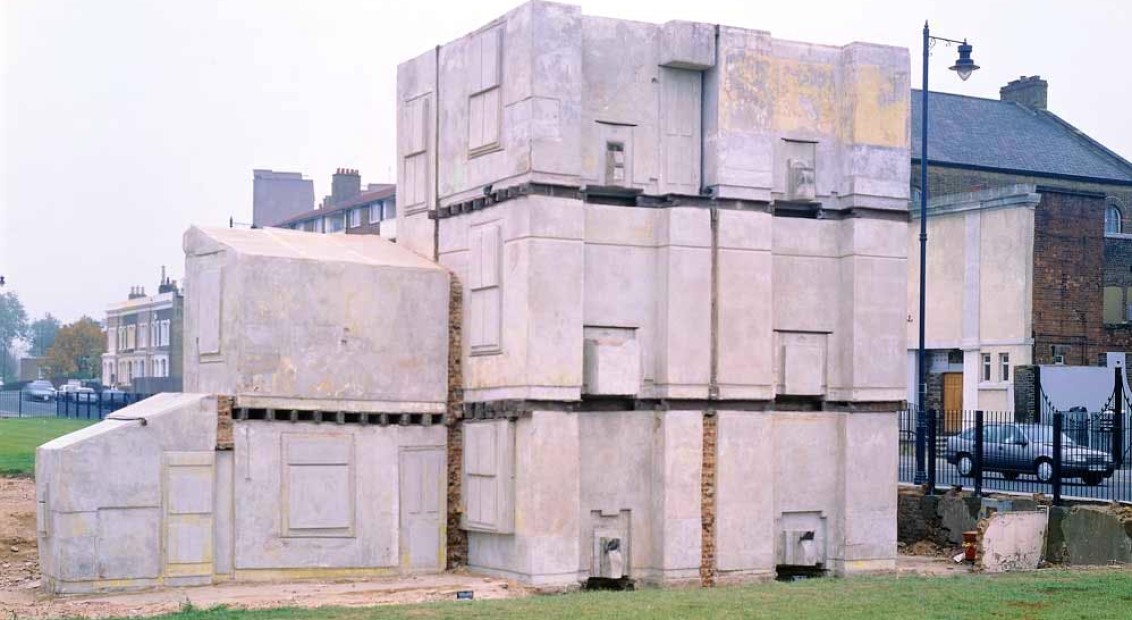 Since becoming the first woman to win the Turner Prize in 1995, Rachel Whiteread has grown into one of the UK’s most celebrated contemporary artists, renowned for her sculptures and large-scale installations. A contemporary member of the YBA movement, Whiteread’s unique practice was recognised with a career retrospective at Tate Britain in 2017 that celebrated over three decades of her work.

Born in London in 1963 to Thomas Whiteread, a Labour-supporting teacher, and Patricia, an artist, Rachel Whiteread grew up surrounded by politics and art from a young age. Despite an early rebellion against her mother’s line of work, by her late teens Whiteread was set on following in her footsteps. A landmark feminist exhibition at the ICA in 1980 curated by Whiteread’s mother called Women’s Images of Men, is cited by the artist as an important contributor to her formative interest in art.

After studying painting at Brighton Polytechnic (1982-85), Whiteread switched to sculpture for her MA at the Slade School of Fine Art (1985-87). There she studied under the tutelage of British sculptor Phyllida Barlow, whose use of found materials and complex, large-scale sculptural installations had a significant influence on the evolution of Whiteread’s later work. During this period she also attended workshops by legendary British sculptor Richard Wilson, with whom Whiteread began to explore her later signature of casting objects. Unlike conventional casting however, Whiteread was drawn to the internal, negative spaces of domestic objects, mysterious dark voids that resonate with strong emotional values. 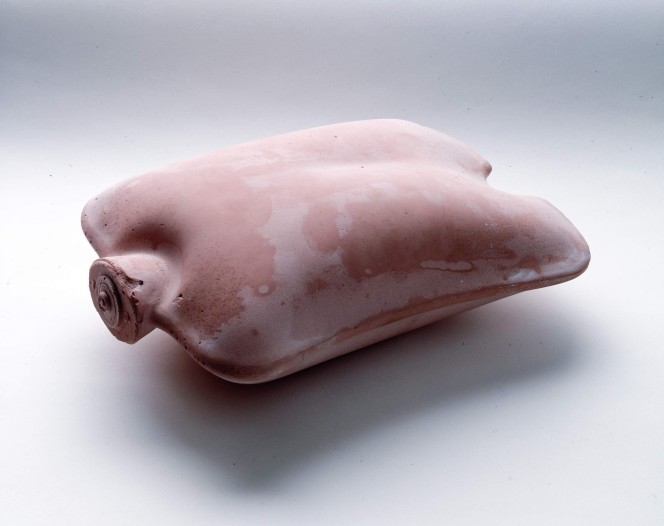 A year after graduating, Whiteread presented her first solo show at the now defunct Carlisle Gallery in 1988. The four plaster sculptures she presented there were a sublime early marker of her deft handling of memory, childhood and death – themes that were to remain part of her autobiographical register.

Torso, cast from the inside of a hot water bottle, Mantle, taken from the underside of a dressing table, Closet, a felt-covered monolith that mapped the interior of a wardrobe and Shallow Breath, cast from the space beneath a bed – all are deeply personal meditations based on everyday domestic objects from her own home. The wardrobe refers to the space Whiteread hid in as a child (Closet) and the bed to her father’s death (Shallow Breath), powerful evocations encasing early memories. 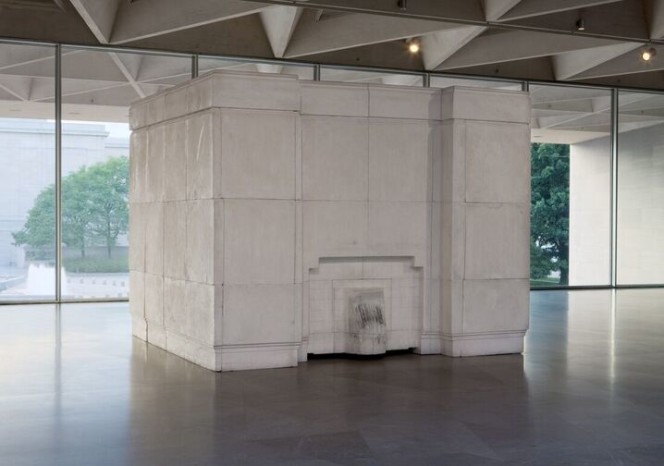 In 1990, Whiteread created her then largest ever work, Ghost, a plaster cast of the interior void of a Victorian parlor, a project she described as, “mummifying the air in a room.” This monumental sculpture records the signs of former lives, from the remnants of coal on the fireplace to scratches on the skirting boards. The work was considered a breakthrough for Whiteread and a precursor to her Turner Prize-winning House sculpture that she made in 1993.

Together with the collaborative arts organisation Artangel, Whiteread succeeded in casting the interior of an entire house condemned to demolition in London’s East End. The work spoke of the area’s gentrification and stirred enormous controversy among tabloid media who refused to accept it as art and called for its demolition. They got their wish several months after the work was unveiled, and although nothing remains of it today, House forms an indelible chapter in the history of British sculpture. 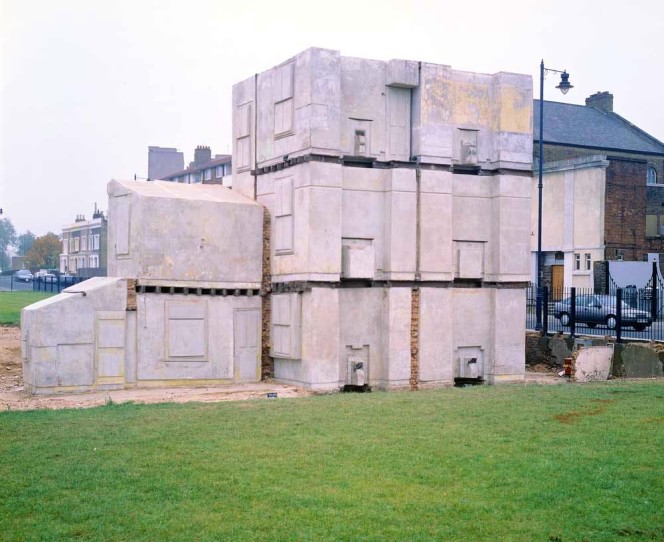 Since then, Whiteread expanded her materials, first in Untitled (One Hundred Spaces) (1997), where she cast the space underneath an assortment of found chairs in multicolored resins (described by one critic as “a field of large glace sweets”), and then in Water Tower (1998), in which she produced a transparent cast of the inside of a water tower that shone like a jewel on Manhattan’s skyline. Her mastery of casting was pushed further still for her 2001 Fourth Plinth commission on Trafalgar Square, where she cast an eleven-ton resin replica of the plinth (after eight unsuccessful attempts) as a bedazzling anti-monument.

In 2005, Whiteread filled Tate’s Turbine Hall with enormous mountains of piled white polyethylene boxes (casts from the interior of cardboard boxes), amassing over 14,000 in total. Embankment saw visitors walk through the canyons that cut through this icy maze, dwarfed on all sides by its vastness. The installation remains Whiteread’s largest, and later works have seen her revert to smaller, “shy” sculptures with her concrete casts of sheds, dotted around Europe where they are concealed by nature. 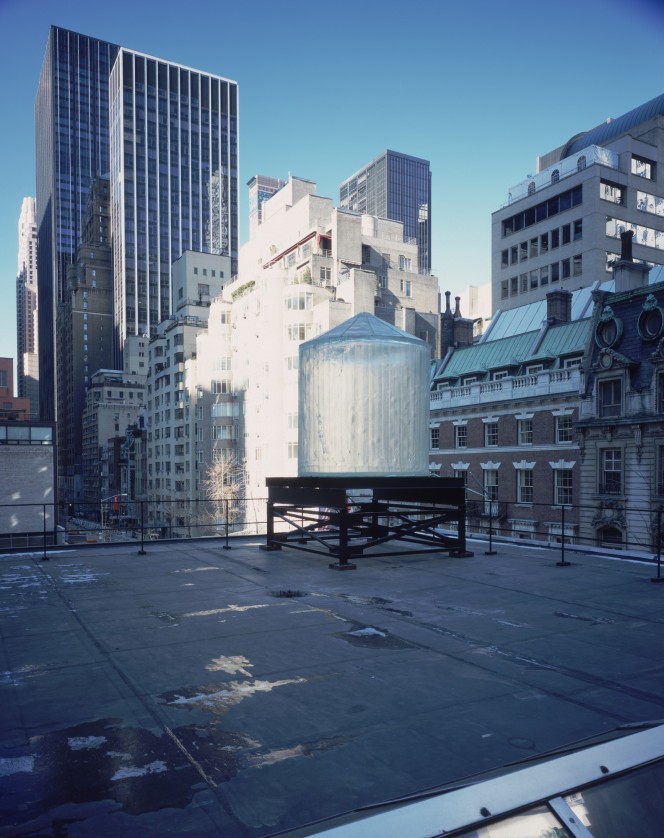 After five and half years of tortuous negotiations, Whiteread’s Holocaust memorial (and first permanent sculpture in the public domain) was finally unveiled in Vienna’s Judenplatz (Jewish Square) in 2000. This single-storey, bunker-like block of concrete is, upon closer inspection, lined top to bottom with rows of books, or rather, imprints of the negative space left behind, with their spines turned inward, hidden from view. As a site-specific work, the memorial engages directly with the medieval synagogue that was burned down on the square, Vienna’s old Jewish centre, during the pogrom of 1420, the remains of which lie underneath the memorial and can be visited via an underground museum. 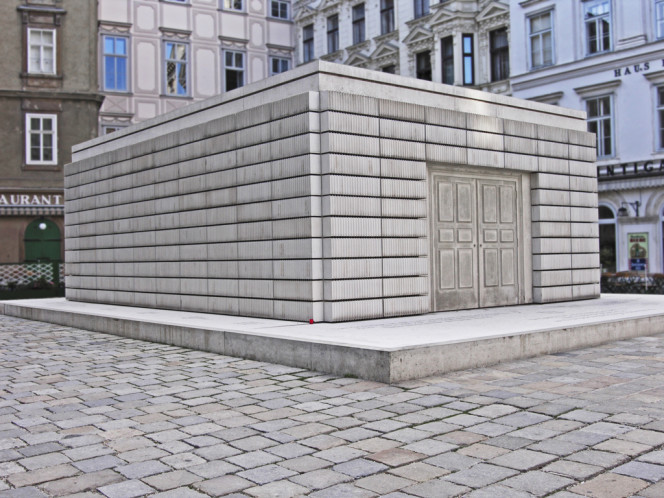 The work memorialises not only the 65,000 Austrian victims of the Holocaust, but recall the  book burnings that precipitated the Nazi’s rise to power during the 1930s. Of these events, few are as infamous as the one that took place on May 10 1933, in which 40,000 people gathered in Berlin’s Opernplatz to eviscerate un-German texts and anything deemed contrary to Nazi ideology.

Whiteread’s anonymous library, with its double doors sealed firmly shut at one end, speaks of the personal histories that are now forever closed and the dangers of isolating ourselves from knowledge. In another sense, these stories, preserved in concrete, are the ones that must never be forgotten and in some cases, were never even written. Like her Fourth Plinth commission, the memorial eschews a more conventional grandiose style (it was intended to be visually arresting but not beautiful) and, by casting the negative space, emphasises the permanent sense of cultural loss inflicted by the Holocaust.