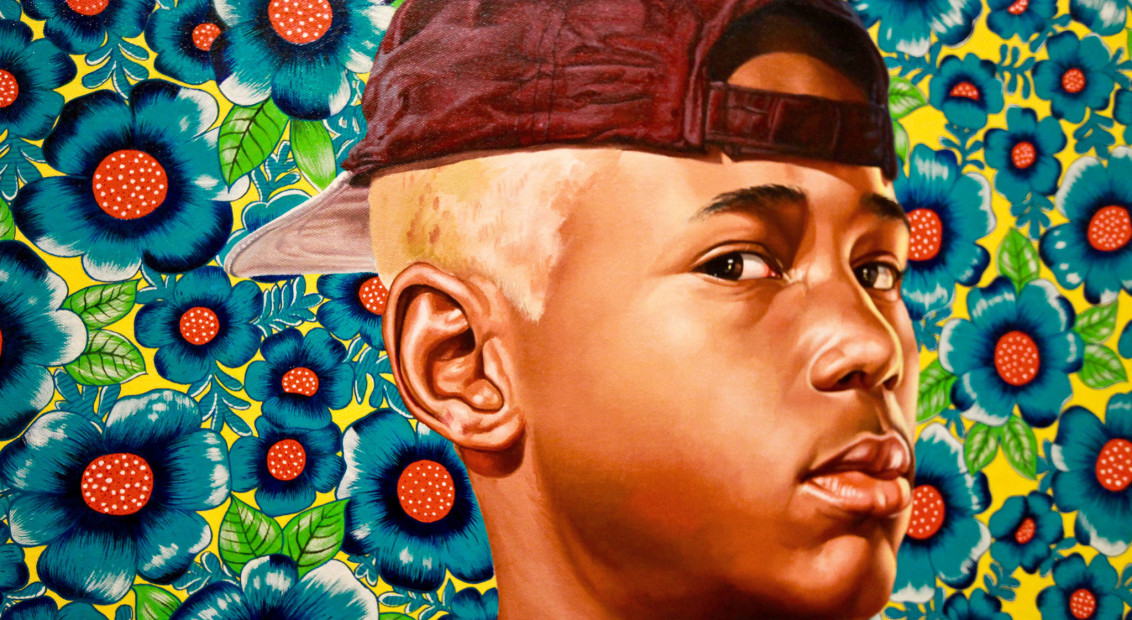 Raised in California and based in New York, Kehinde Wiley is one of America’s leading artists whose hyper-real paintings subvert the principles of European portraiture, blurring the boundary between traditional and contemporary representation. As a gay black artist who has been exhibited globally, including a career retrospective at the Brooklyn Museum in 2015, Wiley is a leading voice on marginalised identities and perceptions of blackness.

From a young age, Wiley’s interest in art was supported by his mother, who enrolled him at weekend art classes in South Central LA. Here he found refuge and an inspirational counterbalance to the violence and crime of his neighbourhood.

Wiley’s early encounter with the visual arts coincided with the Golden Age of hip-hop in the 80s, when pioneering icons like the World Class Wreckin’ Cru and N.W.A were beginning to put West Coast hip-hop on the map. The influence of this period, particularly the dress codes and conspicuous displays of material consumption, are visible throughout much of his work. Another defining influence came from the absence of black people in the so-called ‘high art’ he sought inspiration from. While “spending a lot of time at museums and staring at white flesh”, Wiley familiarised himself with the aesthetic vocabulary of the Old Masters. These techniques became integral to his later interrogation of black masculinity and queer identity.

After attending the San Francisco Art Institute in 1999 and receiving his MA from Yale School of Art two years later, Wiley became an artist-in-residence at the Studio Museum in Harlem. Here, Wiley began his streetcast paintings, initiating a process that would not only come to define his style but take him around the world with his series, The World Stage. Working initially with found photographs of black men, the series expanded to include globally streetcast models who were asked by Wiley to choose a classical painting and recreate the proud poses seen in aristocratic portraits by the likes of Titian, van Dyck, Ingres, and Rubens.

By appropriating the technical aspects of traditional portraiture and inserting black bodies into spaces previously reserved for white noblemen and royalty, Wiley strikes at the heart of issues surrounding the representation of blackness. These large-scale works play with obvious anachronisms, yet in their contemporary dress the sitters often reflect the same visual opulence as the originals, with designer clothes and expensive jewellery replacing riding breeches and encrusted sabres. 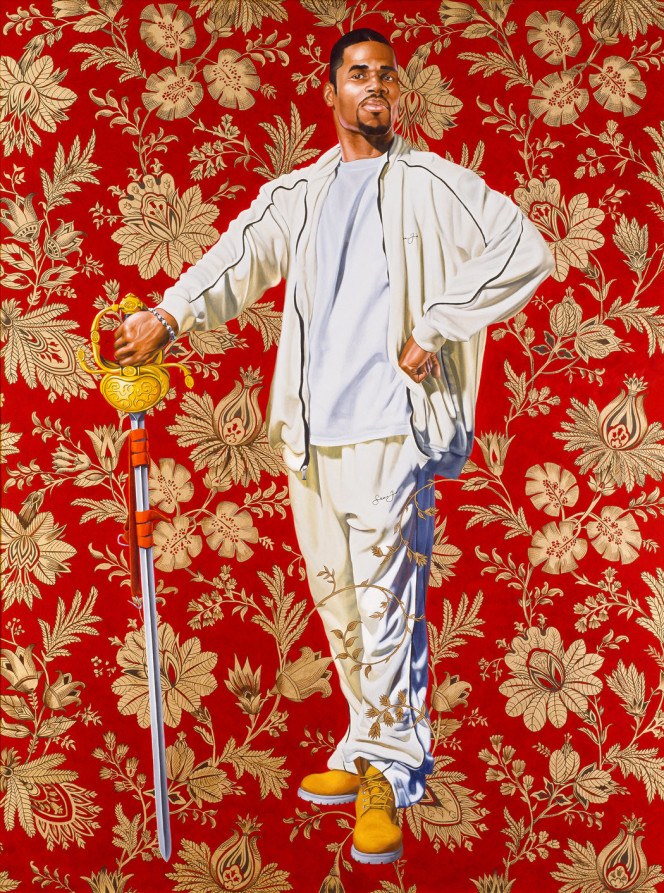 As Wiley noted, “I use Rococo influences, with is garishness and vulgarity, to complement the flashy attire and display of ‘material consumption’ evident in hip-hop culture.” Yet instead of the sumptuous architecture and bucolic landscapes favoured by the Old Masters, Wiley’s sitters are presented in front of vibrantly coloured floral backgrounds that reference Rococo, Islamic art and African cloth paintings, reflecting the cultural breadth of vision and his own cultural heritage (Wiley’s father is Nigerian).

Wiley received international attention in 2005 when he appropriated Jacques-Louis David’s famous painting Napoleon Crossing the Alps (1801-5). In his pastiche, Wiley replaces the emperor on his rearing horse with Ice-T, tattoos clearly visible beneath an all camo uniform, complete with Timberland boots and a bandana (Napoleon Leading the Army over the Alps, 2005). This dramatic portrait is set against a scarlet and gold Rococo background pattern, complete with cheekily inserted swimming sperm cells. Wiley offers an ironic take on the bristling machismo and flagrant heterosexuality of the original, subverting the canon of traditional white representations of status and wealth and critiquing demeaning representations of young black men in the media by presenting them as today’s power holders. Fittingly, Napoleon never led his army over the Alps on a white horse, but followed behind on a mule. 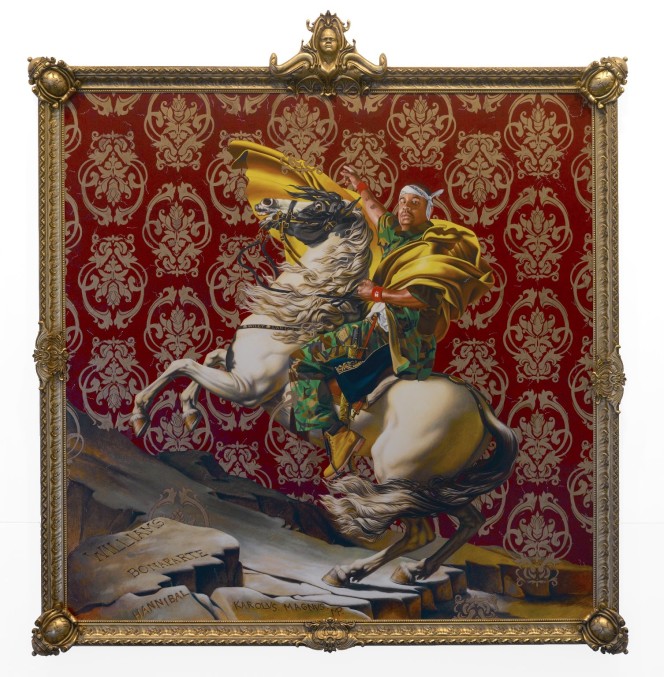 In the last fifteen years, Wiley’s The World Stage has lived up to its moniker, streetcasting black people in Brazil, China, Israel, Nigeria, Senegal, Jamaica, India and Sri Lanka, countries which, in his eyes are, “on the conversation block in the 21st century.” The portraits follow a similar format yet each is site specific. In Brazil, for example, Wiley referenced the colourful tablecloths seen in favelas for his background, while his west African portraits were informed by the patterns of local markets.

More recently, Wiley has extended his appropriation of classical works with his new series In Search of the Miraculous, in which he departs from his signature portrait style in favour of epic waterscapes in the style of Turner, Bosch and Homer. This emotive study on the sea includes his first film, Narrenschiff, 2017 (Ship of Fools) a three-channel projection on migration and territory. In addition to campaigns with Givenchy, Wiley most recently presented his first UK solo show with portraits of black women he’d streetcast around Dalston, painted against backgrounds inspired by William Morris prints (The Yellow Wallpaper). 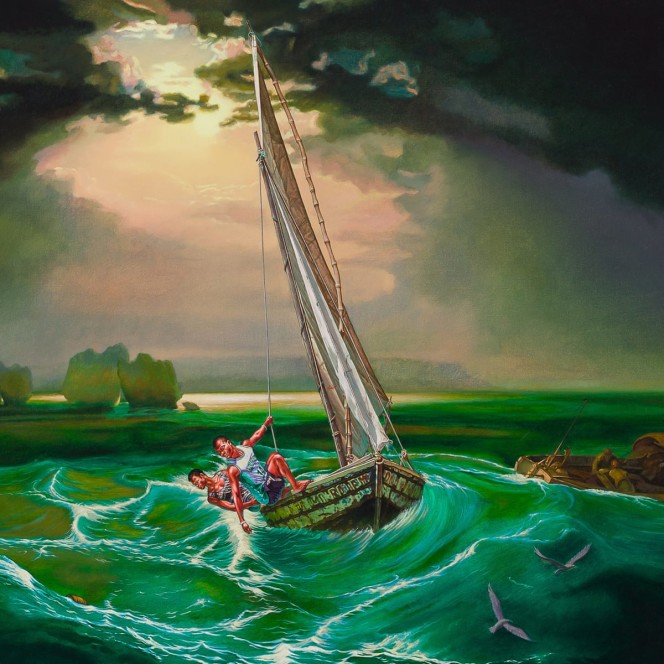 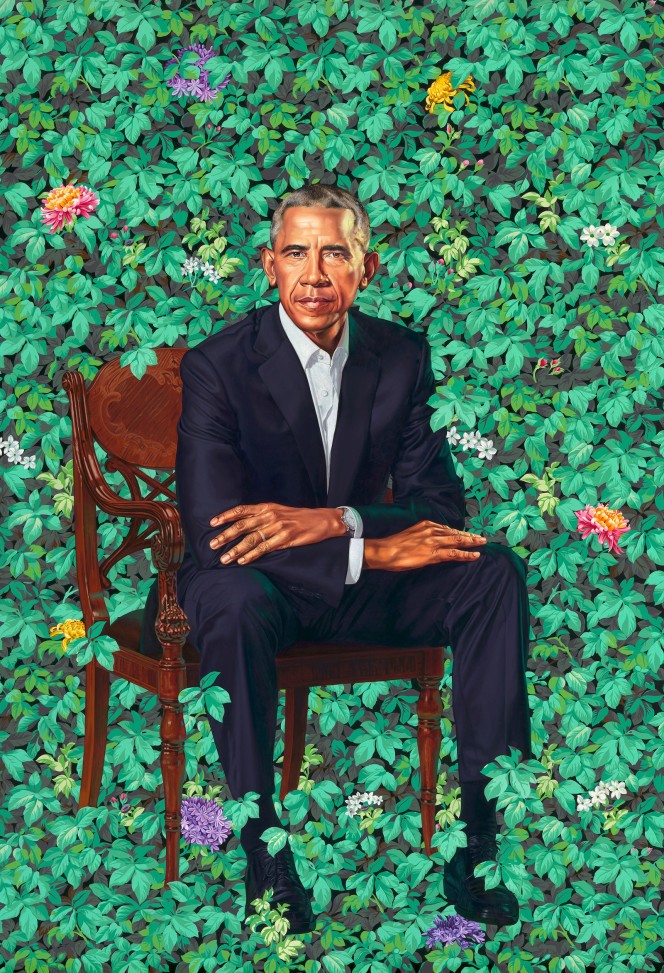 In 2017, Wiley was selected by Barack Obama as the first black artist to paint the presidential portrait. Looking directly at the viewer, Obama sits on a wooden chair that floats against a background of lush foliage and colourful blooms: chrysanthemums, jasmine, and African blue lilies. Each flower has particular relevance to Obama’s personal history: chrysanthemum being the official flower of Chicago (where the Obamas lived for several years), jasmine representing Hawaii (where Obama was born and raised), and African blue lilies (symbolising the President’s heritage).

Unlike countless other presidential portraits, Wiley’s work does not emphasise power and control, but resembles the more recent trend towards an ‘of the people’ congeniality (see Robert Anderson’s portrait of George Bush) while giving it a surreal twist. Speaking to The New Yorker, Wiley said, “He [Obama], from the very beginning, wanted to have a very relaxed, man-of-the-people representation. Even the smallest details, things such as the open collar, the absence of the tie, the sense that his body is actually moving toward you, physically, in space, as opposed to feeling aloof. All of those subtle things go into what a portrait means.”