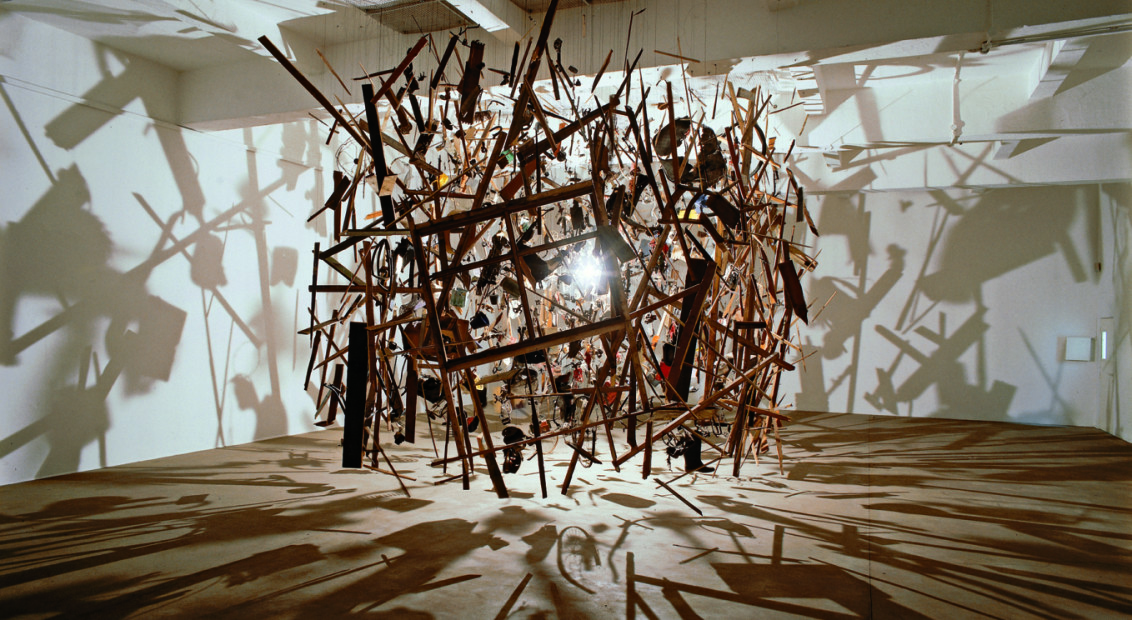 Cornelia Parker is a British artist specialising in site-specific sculpture and installation which celebrate volatility and impermanence with imaginatively transformed found material. A Turner Prize nominee in 1997, she is an internationally renowned figure and one of the UK’s most thought-provoking artists.

Growing up in rural Cheshire on her parent’s smallholding, Cornelia Parker’s childhood was characterised by a kind of insular sense of freedom that came with working on the land from an early age. When she was a teenager, her mother was diagnosed with schizophrenia and underwent electroshock therapy, an experience that etched itself into Parker’s memory and informed her urge to create.

Those urges were first honed away from the London scene; at Gloucestershire College of Art and Design (1974-1975), followed by Wolverhampton Polytechnic (1975-1978) and then Reading University, where she completed her MA in 1982 before moving to the capital two years later. Parker’s subsequent emergence was, quite literally, explosive.

In 1991 Parker blew up a garden shed (with the help of the Army School of Ammunition) for Cold Dark Matter: An Exploded View (now in Tate collection) blasting charred fragments of wood and found objects she’d placed inside sky-high. This shrapnel was then painstakingly collected, hung from the ceiling and lit by a single bulb from within, freezing a split second of chaotic combustion that cast dramatic shadows on the surrounding walls of London’s Chisenhale Gallery. The work was an immediate sensation.

For Parker this suspended explosion referenced a significant visual trope of modernity, one that connects popular culture, science and politics of a period of frequent IRA bombings – a mix that informs much of her subsequent work. As she explained in an interview, images of explosions recur through, “the violence of the comic strip, through action films, in documentaries about Super Novas and the Big Bang, and least of all on the news in never ending reports of war.” 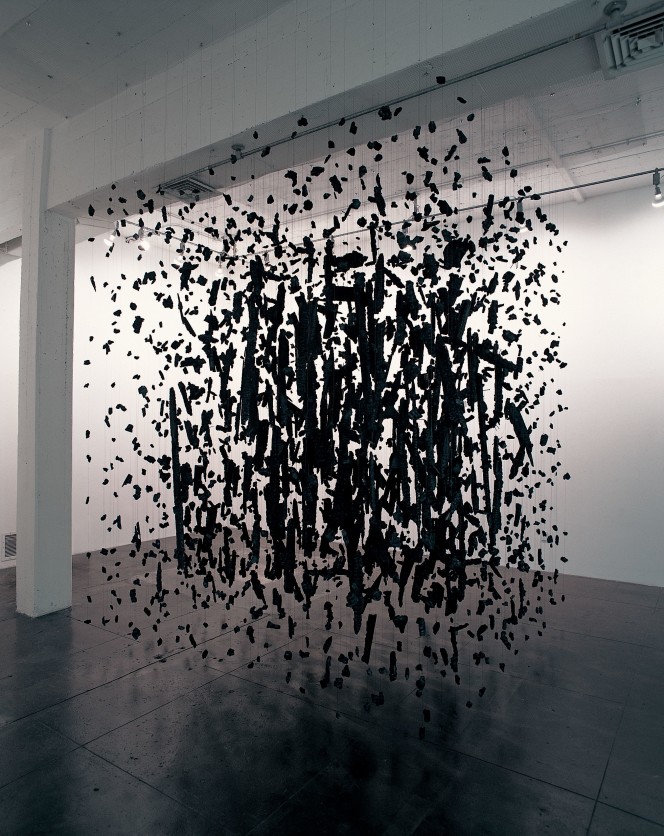 Three years previously, Parker was already experimenting with the aesthetics of mutability in Thirty Pieces of Silver (which took its name from the fee Judas was paid to betray Jesus), another signature piece in which she used a steamroller to flatten a collection of found silver objects. Plates, trophies, instruments, candlesticks, old heirlooms, all were rendered in two dimensional form like a scene from Tom and Jerry, before being suspended inches from the ground as pools of reflective light. Along with her exploded shed, this work is among her most loved and best known. 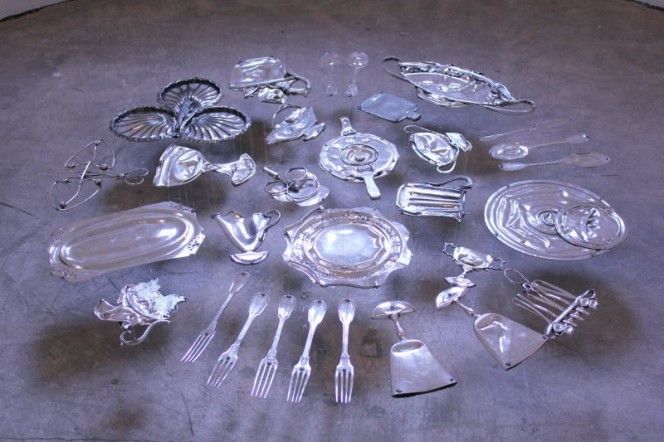 Parker excels at creating wonder and surprise. In 1995 she collaborated with Tilda Swinton on The Maybe, an installation shown at the Serpentine in which the actress lay asleep inside a glass vitrine for 8 hours a day over the course of one week. Surrounding Swinton were more vitrines containing possessions of famous people: Dickens’ quill, Freud’s cushions, one of Churchill’s half-smoked cigars – all objects that are seemingly inanimate yet in this context become potent vessels of memory, spirit and life, seemingly conjured by Swinton’s dreams (a kind of contemporary personification of Sleeping Beauty).

Parker’s interest in ephemerality and the potential of materials was revisited with Mass (Colder Darker Matter), for the 1997 Turner Prize exhibition in which the blackened remains of a Texas church struck by lightning hung in a ghostly cube that once again simulated explosive dispersion. The ‘series’ was extended in 2005 when Parker created a similar hanging sculpture with the salvaged wood of a Kentucky church that had been destroyed by a racially-provoked arson attack (Anti-Mass, 2005). 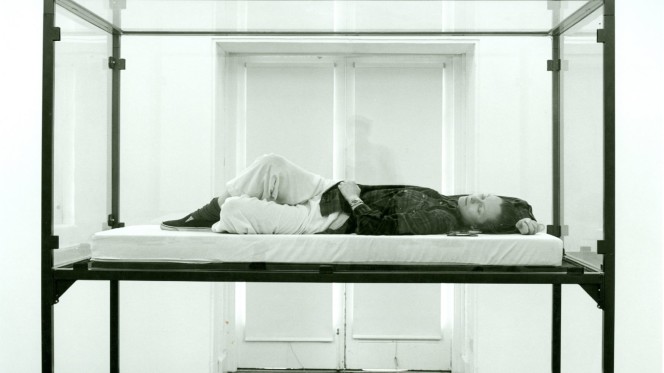 The Maybe. Conceived and performed by Tilda Swinton in an installation for the Serpentine Gallery created with Cornella Parker in September 1995. Photo credit: Hugo Glendinning

A highly versatile artist, Parker not only produces sculpture and installations but is equally inventive in her drawings, photographs and videos. A key series that began in the 1990s are her Pornographic Drawings, which returned to the idea of revitalising objects with former lives that were otherwise condemned to neglect or disuse. After acquiring confiscated pornographic tapes from Her Majesty’s Customs and Excise, Parker extracted the film’s ferric oxide to use as paint for mirror-printed, symmetrical works that give physical form to the non-physical elements of their past.

The Rorschach technique was later revisited using rattlesnake venom (combined with black ink) and its corresponding anti-venom (combined with white ink), thus fusing the binary of destruction and salvation with the form of psychological tests. These inkblot drawings which sometimes recall genitalia and reproductive organs, became part of a series that spanned over a decade (1995-2006) and explore the same interest in state-controlled materials that saw her create work using incinerated cocaine that had been seized by authorities (Exhaled Cocaine, 1996).

All of Parker’s works share a preoccupation with mutability, flux and transience, basic truths of our existence that manifest in violent, fragile and contemplative works. As Parker notes, “We don’t have solid, fixed lives; we’re consistently dealing with what life throws at us.” 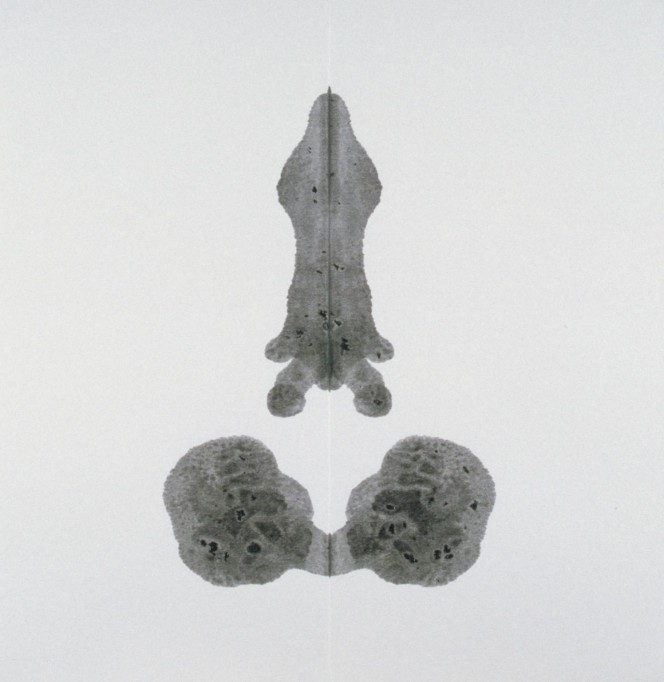 Originally commissioned for the Metropolitan Museum’s roof garden in New York, PsychoBarn is based on the iconic Bates’ motel from Hitchcock’s 1960 classic, Psycho (itself inspired by a 1925 Edward Hopper painting, House by the Railroad). In typical Parker fashion, the 30ft structure was constructed using re-purposed materials from a dismantled 1920s red barn from upstate New York and embodies the complex interweaving narratives of its material and form.

Against the Manhattan skyline, Psychobarn looked incongruous and ominous. On closer inspection, the Hitchcockian simulacrum revealed itself to be a true film set – all illusory facade, propped up with a mass of scaffolding from behind. Not only does the house represent a dichotomy of good and evil – idyllic traditional American vernacular versus archetypal spooky dwelling – it also embodies the double interpretation of Hopper’s quintessential vision of Americana by both Hitchcock and Parker.

Harnessing the psychological legacy of Hitchcock’s creation, whose three floors contemporary philosopher Slavoj Žižek equates with physical manifestations of the id, the ego and superego, the work’s title hints at another layer of psychoanalytic theory, namely, transitional objects used by children to help negotiate their self-identity and ‘transition’ to independence. Like so much of Parker’s work, PsychoBarn is philosophically and psychologically rich, inviting multiple levels of interpretation that oscillate between comfort and threat, wonder and illusion. 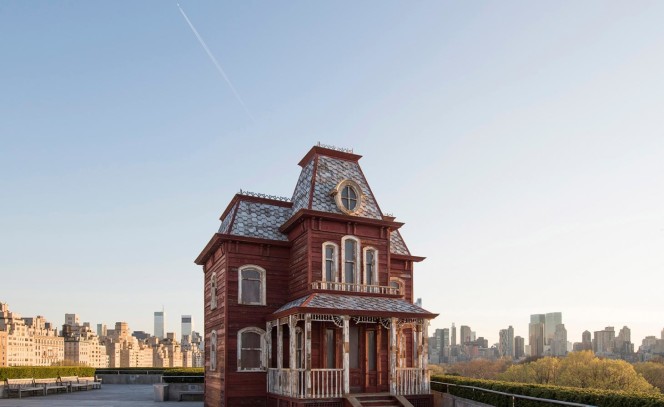 PsychoBarn on the roof garden of New York's MET, 2016.