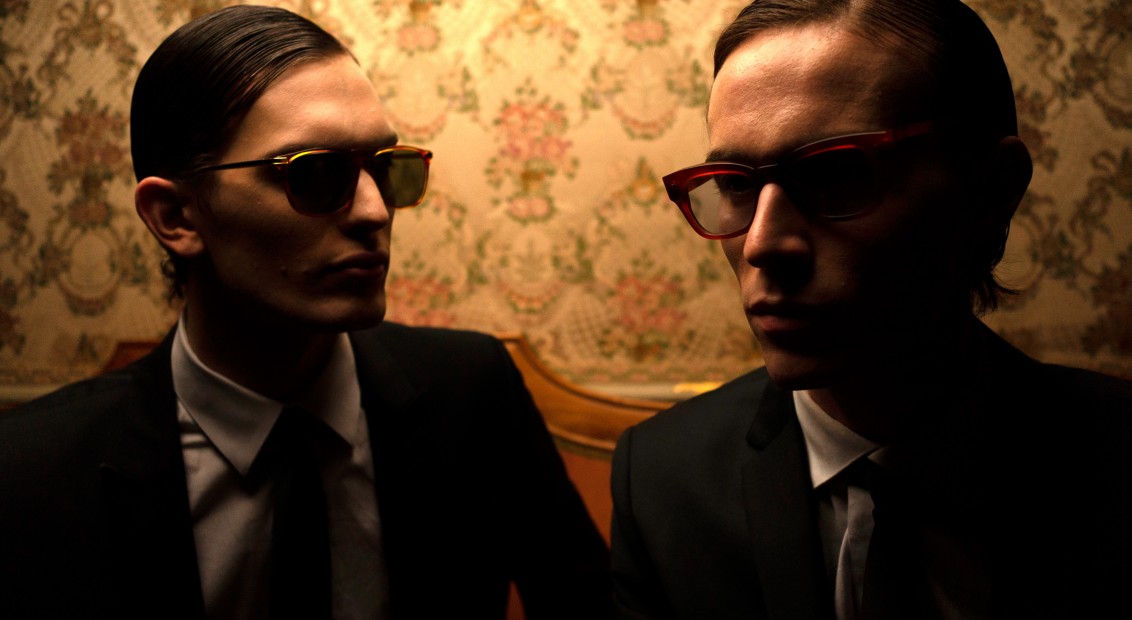 “Central to European Vampire is the idea of a man who evolves and simultaneously deteriorates himself throughout his feelings and actions,” says Italian model and musician Lorenzo Sutto outlining the elusive muse behind his new sonic project European Vampire. An amorphic being that revolves around a collective spanning from Rome to London, Sutto is joined by producer Mark Ceiling and a number of young creatives ranging from stylists to graphic designers.

Fascinated as much by the evocative atmospheres of classic Italian cinema (think Fellini and Antonioni) as Bowie’s Berlin years, Sutto marries these ideas under Ceiling’s pulsing, house soundscapes that stalk each track with cinematic pace.

“European Vampire is a Parisan fashion week afterparty, it’s walking at night through the ancient streets of Rome, it’s the emptiness of the corridors of a Swiss boarding school.”

Lorenzo Ottone: What made you create European Vampire?
Lorenzo Sutto: When European Vampire was first conceived two years ago, we aimed to come up with something different, creating a peculiar world and identity which differs from what most bands usually do. The project has a European breadth, however I believe that everything that is created in Italy comes with a certain charm because you’re constantly surrounded by beauty.

LO: What moves and inspires European Vampire’s image?
LS: Central to European Vampire is the idea of a man who evolves and simultaneously deteriorates himself throughout his feelings and actions. It’s the idea of Chet Baker who first was the king of the East Coast coolness and then turned into a crackhead who was found overdosed in the toilet of an Italian gas station and imprisoned. European Vampire is a Parisian fashion week afterparty, it’s walking at night through the ancient streets of Rome, it’s the emptiness of the corridors of a Swiss boarding school.

I’ve always been inspired by the haunted characters of classic Italian films by Fellini and Antonioni, or by artists like Nick Cave, [Italian suicidal troubadour] Luigi Tenco, and the Helmut Newton-esque Bowie of the Berlin trilogy. 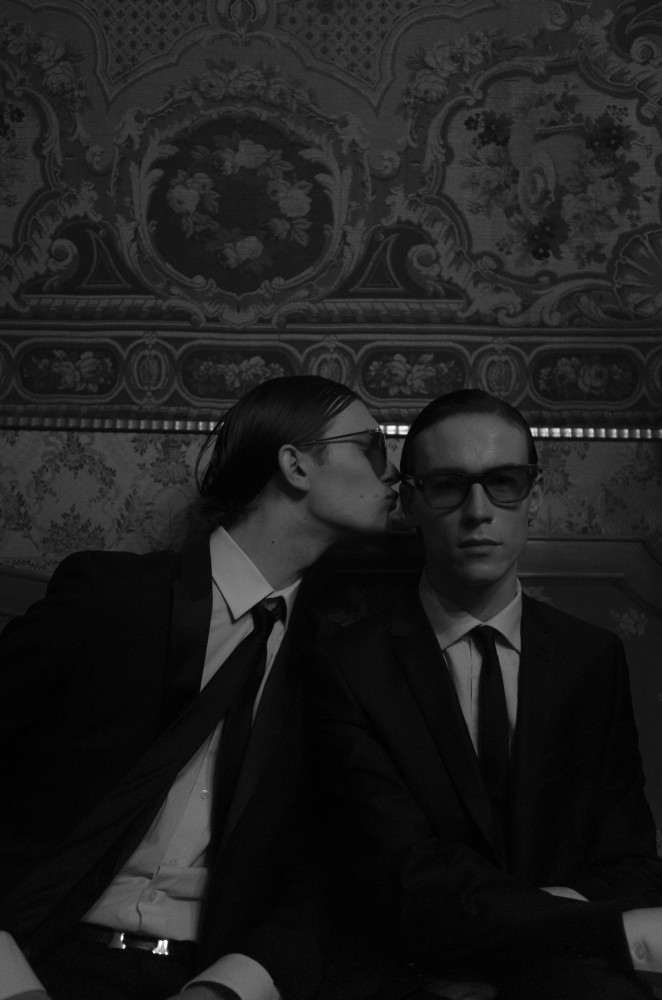 LO: The character described appears to be quite hedonistic.
LS: There’s a Nietzsche matrix and definitely a degree of narcissism that comes from my experience in the fashion industry. We make use of hyperbole and we purposely exaggerate the sensuality of the fashion world. There’s no self-pity, European Vampire is rather selfish and aware of the positive and negative sides of life – this is what makes people feel attracted to him.

LO: There are similarities with David Bowie’s shape-shifting tendencies.
LS: Exactly, Bowie once declared that he has never been any of his characters. To truly be yourself you have to become estranged from your life. Although this project isn’t about Lorenzo Sutto neither about Mark Ceiling, by creating this character together we gave life to something more truthful than we would ever be able to come up with by ourselves. Behind a mask, you can truly be who you want to be. Some similarities can be traced with [Italian electronic pop project and Massive Attack collaborator] Liberato. However, if he tried to elevate Neapolitan urban scenarios, European Vampire doesn’t celebrate life, we are anti-reality. We project listeners into another world. 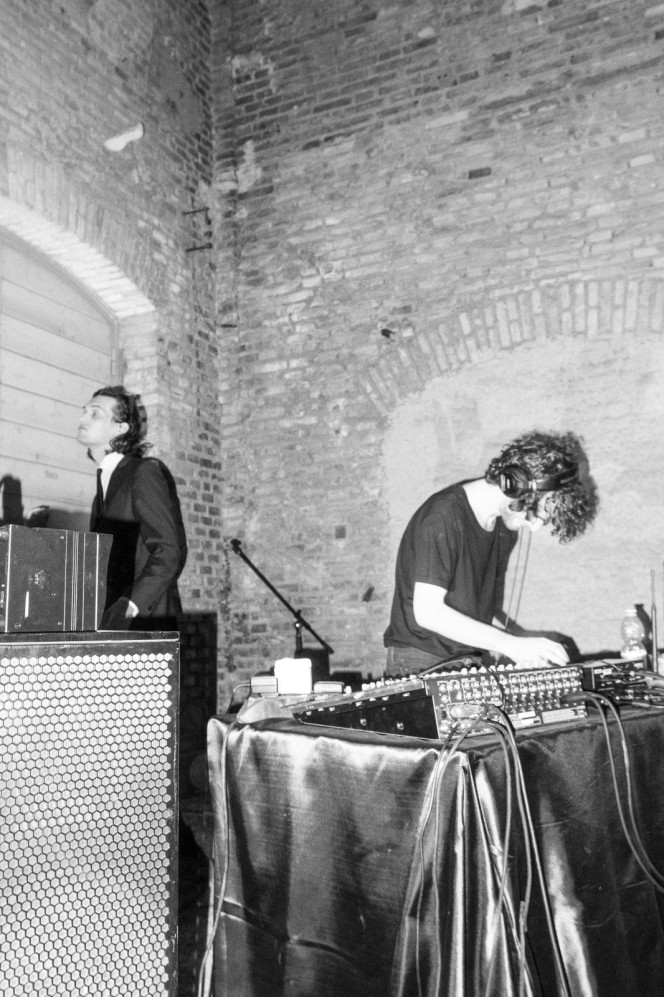 LO: How does this relate to your debut single Tom Ford? Is that an ode to the designer and director?
LS: We picked Tom Ford only because it sounds good and that is all it takes to create imagery that transports the listener to another dimension. I’m not praising the brand, the designer nor the director. We are trying to portray our mind’s re-interpretation of Tom Ford, so that people from now on will associate the name to European Vampire.

LO: Is there any celebration or demonisation of the fashion industry in the project?
LS: Personally, I can’t praise it or condemn it. On one side, I like the idea that we used influences from the imagery of Helmut Newton or Peter Lindbergh. On the other, I recognise the downsides of an industry that both gave me a job and led me to breakdowns. However, in European Vampire there’s no room for ethics, only for aesthetics. The Vampire is unapologetic. The project wants to communicate how we are simply a togetherness of features and adjectives that can either work or not according to market trends. We’re all the same when facing, how Ginsberg would say, the Moloch that is the fashion industry. This is well portrayed by the Tom Ford video where me and Angus share an identical look.

LO: What happens to the Vampire in French Touch? Does his storyline progress?
LS: As in Tom Ford, a brand or genre name is used simply for its sound – “parce que sa sonne bien.” French Touch is a stream of consciousness caused by pre-defined aesthetic canons. The aim is to let words and labels be what they are, mere black lines within a white universe, just like Irma Blank, like the void. French Touch is the loss of the concept of genre, it is not a genre anymore but now a lifestyle. The lyrics are a linguistic paradox set to draw the listener into a world only to then suddenly destroy it. The choice of using Anglo-French words in a mix of self-irony and vivid certainties was purposely made to inebriate the listener, so that, confused, they could understand nothing but the sublime and granitic progression of the bass drum. If in Tom Ford the dark-edged Deep House sounds lead the audience towards the idea of the fashion industry’s moral corruption, in French Touch the brightness of the tones brings them to a suspension of any moral judgment, which is something that belongs to French culture.

LO: How does the collective nature of the project affect the character’s psychological development?
LS: Although the project was born two years ago from the mind of Mark and myself, it soon evolved into a collective when it started acquiring a strong visual identity thanks to my girlfriend Aurora Manni, our stylist Stefania Sciortino, and director Michele Formica who shot the video. His girlfriend Costanza Starrabba then joined in and drew DMMM, the graphic novel that comes with Tom Ford. I like to think of European Vampire as an ever-evolving character who is shaped, both in the image and the music, by the contribution people give to it, in the style of [French band] La Femme.

LO: How is European Vampire going to perform live?
LS: We did a secret show at Palazzo Brancaccio in Rome in front of one thousand people. It was me, Mark and Angus. We dressed up in black suits, like in the Tom Ford video, and opened with a cover of Piero Umiliani’s Atmosphere, then Angus started whispering European Vampire on the mic like an MC to introduce me on stage. Tom Ford was the closing track and got everybody on their feet. We’re working on different ways to perform; we have in mind to book a theatre and structure a gig like a play, Covid permitting.