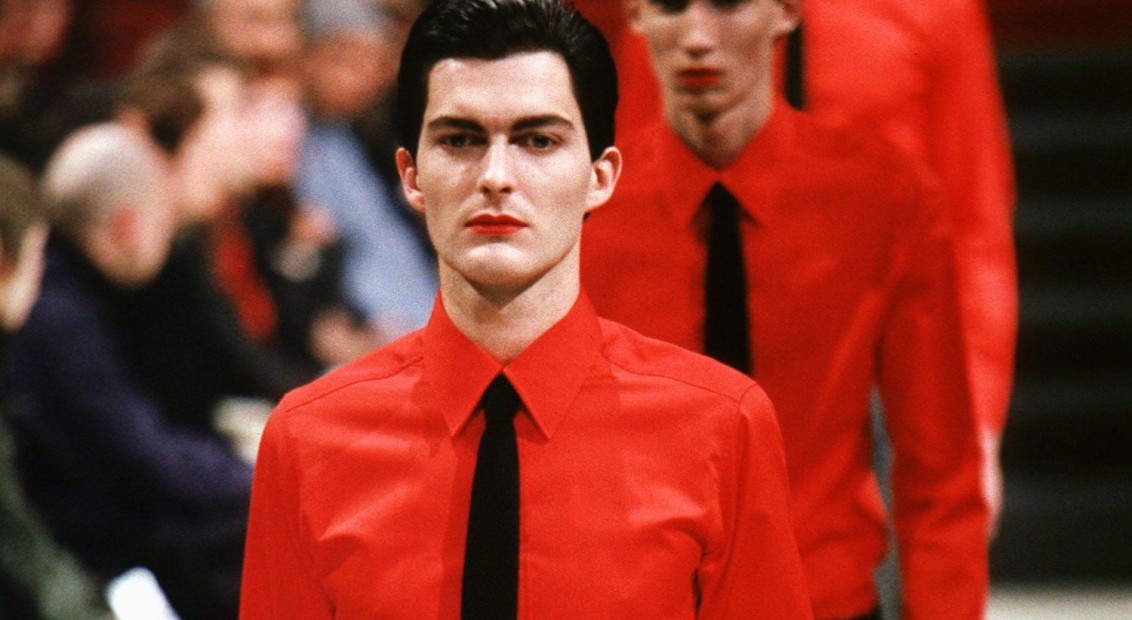 As a teenager growing up in the sleepy Belgian town of Neerpelt, Raf Simons found solace and creative inspiration in music. When he wasn’t researching global subcultures and sewing band patches onto his clothes, the designer spent his spare time scouring local record shops for New Wave gems and rare electronica. But one album in particular stayed with him: Kraftwerk’s 1978 release, The Man Machine.

In 1998, Simons decided to pay direct homage to the group with his Radioactivity show, staged in the grandiose surroundings of Paris’ Moulin Rouge. He had spent the best part of the 1990s forging a design blueprint rooted in street style, sharp tailoring and subcultural references, but music was fast becoming the common thread throughout his work. Not only was Radioactivity named after their 1975 album (the official title was hyphenated as Radio-Activity, a quick pun on the album’s twin themes of actual radioactivity and… airplay), it was soundtracked by the band’s 1974 hit, Autobahn.

Visually, the collection’s jumping-off point was the seminal cover of The Man Machine, created by German artist Karl Klefisch. The saturated crimson visual took inspiration from the avant-garde school of suprematism, which turned geometric forms into abstract artworks and stuck to a strict, limited colour palette. Coined by Kazimir Malevich in Russia way back in 1913, the idea of suprematism shifted art world emphasis away from literal depictions of objects towards a more conceptual mindset.

Klefisch alluded to these values by photographing the band in a diagonal line; each member wore red lipstick, a matching shirt, a black tie and formal trousers. The iconic artwork marked one of the first times Kraftwerk had collaborated with anyone other than artist Emil Schult; and for Radioactivity, Simons cast four of his own muses in exact replicas of the cover’s looks, turning his runway into a moving tribute.

This fusion of street style and smart tailoring had already come to characterise Simons’ collections. For FW98, the designer teamed baggy trousers with slimline tuxedo coats, turtlenecks and monastic jackets, whose diagonal zips and asymmetric necklines seemed like another reference to the abstract geometry of The Man Machine cover. Simons also focussed specifically on cobweb knits, teaming deliberately-dishevelled jumpers with patterns of black ink that crept across models’ faces.

A distinct air of melancholia loomed over a series of all-black looks, but the colour palette seemed more foreboding when a procession of models came out wearing black, robot-like helmets and tuxedo jackets. These ideas of tech mixing with humanity inspired The Man Machine, which now reads more like a speculative social commentary on the digitisation of society. The album also spawned the tongue-in-cheek single The Model – an homage to a carefree, aspirational starlet and the immense power of fashion to spark desire.

Viewed more than two decades later, Radioactivity feels vital for countless reasons: for proving just how interlinked the worlds of fashion and music can be; for properly celebrating the German synth-pop pioneers; for producing powerful, sci-fi visuals which feel even more prescient in today’s increasingly online world. But most importantly, it nails the essence of Simons’ vision: streamlined, conceptual and brilliantly forward-thinking.