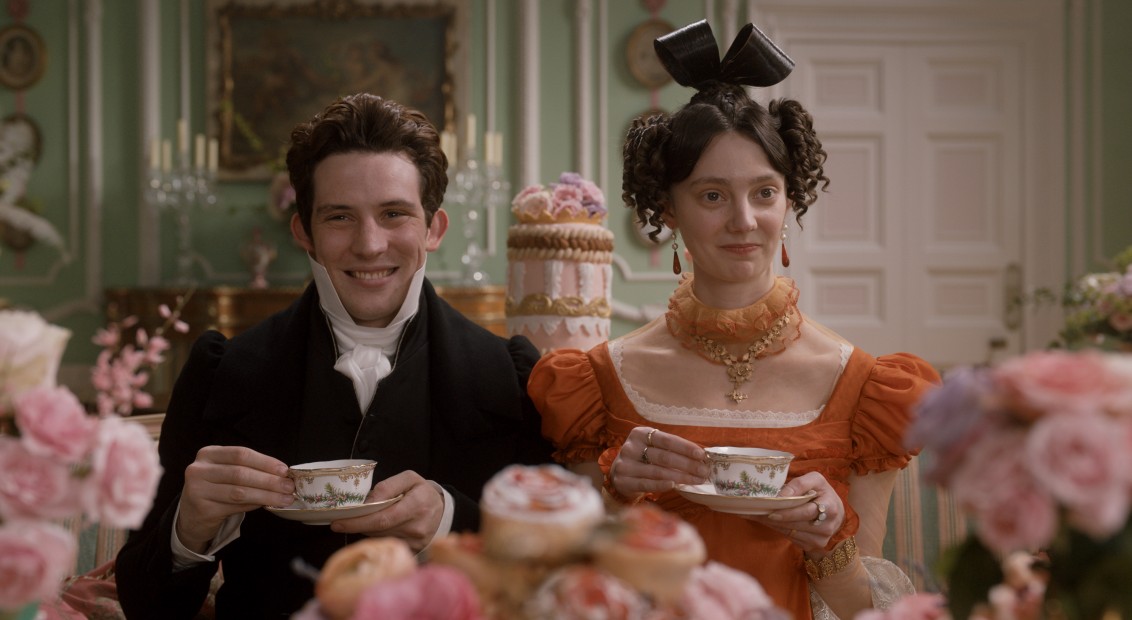 Since her first taste translating Jane Austen to the big screen (Roger Michell’s 1995 adaptation of Persuasion), Alexandra Byrne has established herself as one of the industry’s most accomplished period drama costume designers. Part historian, part storyteller, she embellishes films with costumes grounded in historical context that guide viewers through a director’s vision.

Since her first major break, she has found a particular niche in British history, producing costumes for Hamlet (1996), Finding Neverland (2004), Elizabeth: The Golden Age (2007) and Mary Queen of Scots (2018), receiving an Oscar for her work on Elizabeth to go with her five Academy nominations.

With 25 years more experience, Byrne returned to the world of Austen with Emma, the debut feature film of American director Autumn de Wilde, with a doe-eyed Anya Taylor-Joy starring as its central heroine (plus HERO stars, Josh O’Connor and Callum Turner). Below, Byrne discusses colour, preparing for the film and the joy of creating one-off pieces. 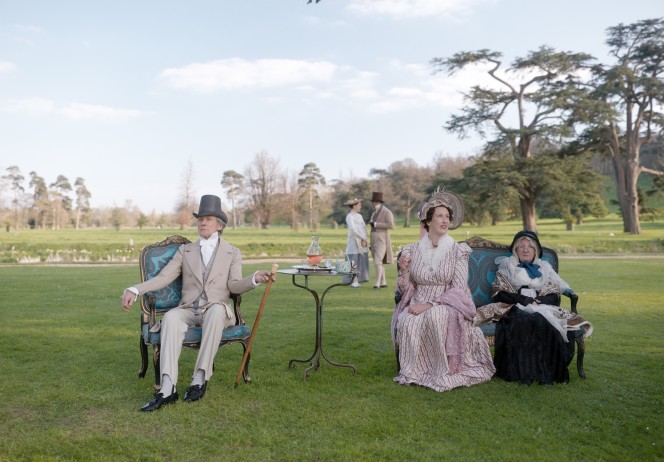 Finn Blythe: You have extensive experience working on period films, but when you were given the script for Emma, were you able to visualise costumes straight away?
Alexandra Byrne: Yes and no. When I’ve done a period before it’s very interesting to return with a body of knowledge that you transpose onto the script when you’re reading it. Do I have images in my head? Not necessarily. I usually have quite a lot of fear, which means my reading becomes quite costume-practical when I first read a script. But yes of course, instinctively I do have a response but because it’s so instinctive you don’t really recognise it. I’m not necessarily seeing images, but I’m getting a feel of each character or the interpretive style. Inevitably when you’re doing period films, anything pre-1900, we’re not doing a V&A archive, it is an interpretation, and you develop a sense of how you feel you can help tell the story.

FB: That’s a good segue to ask about historical accuracy versus telling a story. Do you find that’s a difficult line to tread with projects like Emma, which are based pre-1900?
AB: I don’t think it is. It’s there in the very starting point because our fabrics are manufactured now in a very different way. Our bodies are very different proportions – people go to the gym a lot – so the shapes are very different. What I’ve tried to do is have a knowledge of a period which is kind of the bedrock that works through everything I do. I like to know that if I’m changing something or breaking the rules, I’m making those decisions deliberately as opposed to through ignorance. You have to respect the period but also as a costume designer you need to create a credible world for the story to live in, so you have to understand the period to be able to lift it to where you want it to go and support the story you’re telling. 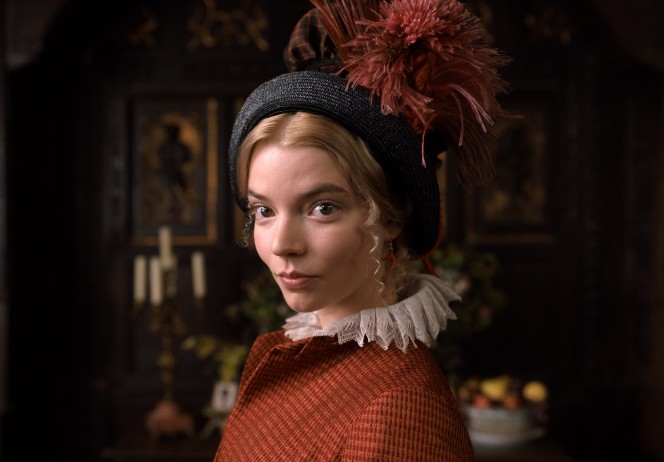 FB: So what kind of initial conversations did you have with Autumn?
AB: Really just finding out the story she wanted to tell. When I first met her she had a beautiful box with framed reference images and engravings. The way she presented that showed me a fastidiousness and an obsession with beauty and fashion and clothes – sometimes directors don’t have that language. For me it was very liberating after doing superhero films in that nearly everything was a one-off. Because of the way I wanted to represent Emma, a very indulged, affluent young woman, she’s constantly changing her clothes.

The original pieces I looked at from the period are quite unsophisticated in terms of how they’re made and cut, but the fabrics are just so delicate and so light – that’s not through age, that was the fashion of the time. It meant we were able to make in that way. So you’re not building robust, action hero, stunt-repeat costumes, you’re doing one-offs, and the joy is you can use vintage pieces of fabric and jewellery and embroidery and trim and work those into new fabrics, knowing you haven’t got to make five costumes that look the same.

FB: Can you share anything about the sources you used?
AB: Anything and everything. I still have the moodboard from Persuasion and I looked at them and just remembered how hard it was to find those images. You found them in books and ran down to the shop that had the colour photocopier and printed them. The internet is an amazing thing, you’re inundated with images, most of which are labelled the wrong date, but in tandem with that going to a museum and spending time looking at the original pieces.

What’s extraordinary about this period is it was the beginning of women’s journals and magazines with fashion plates. They’re incredible engravings but when you look at them you go, “What on earth are those? How do they work?” The tendency is they get built as very heavy, over-worked costumes but when you look at the fashion plates and surviving garments, you begin to understand how the real garments were made. People saw the fashion plates and had to interpret them, they were quite spontaneous, quite often dresses were adapted and were very home-made. So there’s an amazing amount of spontaneity and endeavour in these dresses, which is quite contagious, actually.

“There’s an amazing amount of spontaneity and endeavour in these dresses, which is quite contagious, actually.” 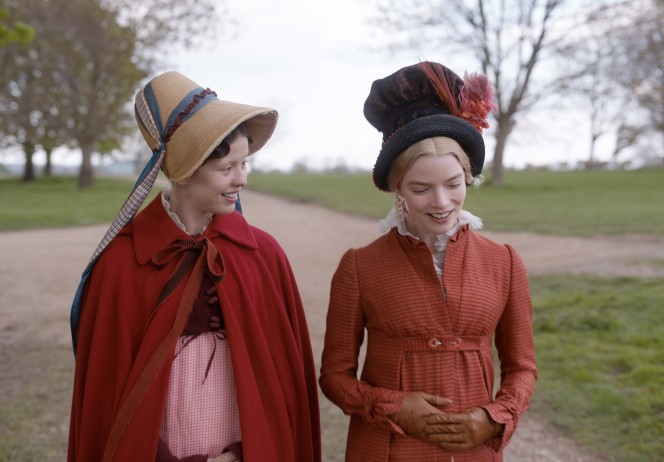 FB: What kind of help does Jane Austen give to costume designers?
AB: I think she gives a lot. And there’s a lot written about the period, not just Jane Austen, right down to how they did their laundry. I think Emma is unique because Austen’s writing style is designed for the reader to share Emma’s illusions so I felt very strongly that the film needed to create a world that is like a delicious bubble the audience is invited into. You’re both inside Emma’s world and outside it.

FB: Colour was hugely important in Mary Queen of Scots. What kind of role did it play in Emma?
AB: Obviously Emma is hugely colourful. As a designer I think colour is one of the biggest and most wonderful design tools we have because you can use colour for subliminal messaging or guiding the audience. Autumn really wanted the world of pastels and macaroons and that’s not my comfort zone at all, but again you look at the paintings and the fashion plates and it’s all there, it’s about the exact tone. If you say put pink and yellow together, I kind of go, “Whoa, really?” But I did really enjoy the colours and I worked very closely with Anna Cavaliere [assistant costume designer] on the colour scheme for all the rooms. I wanted to use colour in such a strong way there would be moments where Emma belonged to her environment and times she was at odds with it.

Emma is in cinemas now.