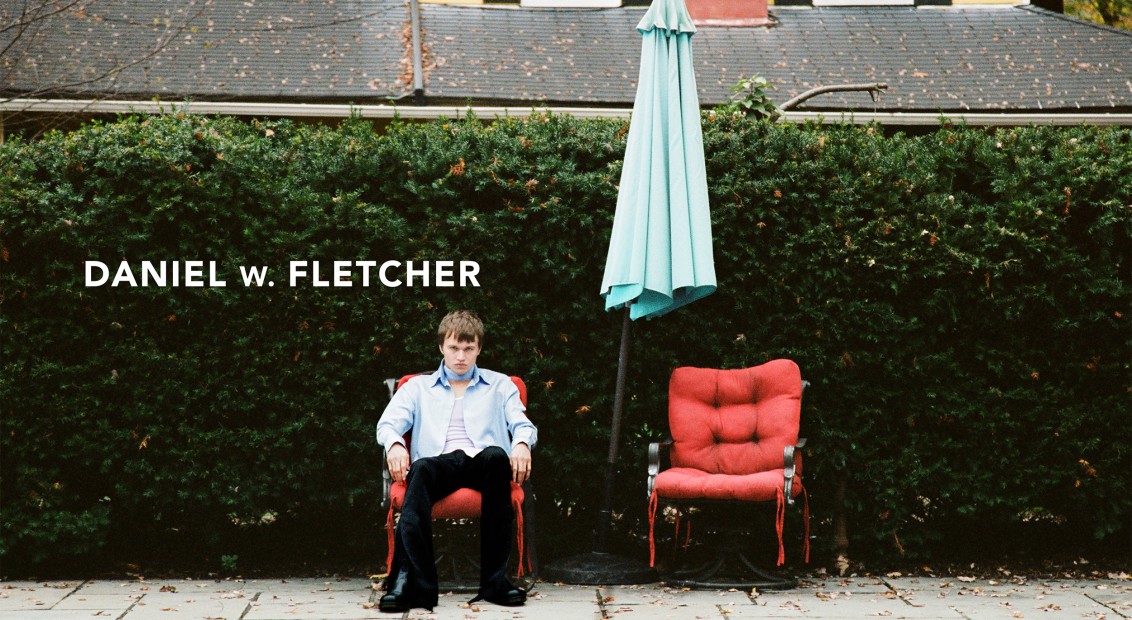 Daniel w. Fletcher shares the story behind his SS20 campaign

It’s been a whirlwind few months for Daniel w. Fletcher. Not only has the talented designer taken his own eponymous label from strength to strength, he’s landed a coveted role at Fiorucci and even found time to compete in Next In Fashion, the newly-released Netflix show on every fashion fan’s watch list. Between juggling these commitments, Fletcher teamed up with HERO editors-in-chief Fabien Kruszelnicki and James West for an eerie SS20 campaign, shot on the grounds of a dilapidated house in upstate New York.

The atmospheric images nail the mood of the collection, which tells the story of an American teen eagerly anticipating his school’s prom night. Torn and slightly anxious, Fletcher’s athletic muse begins rifling through his wardrobe: should he pull his dad’s oversized shirts and split-leg trousers, or will his own gym shorts and trusty, dishevelled varsity jumper do the trick?

This knack for storytelling underpins Fletcher’s distinctive vision – a sensibility he says he picked up during his time working for Kim Jones at Louis Vuitton. Over the years, he’s become adept at reinterpreting these narratives for his campaigns, which tend to introduce the clothes to new, unfamiliar worlds.

With that in mind, we reached out to Fletcher to chat inspirations, the art of visual storytelling and his Netflix-driven foray into womenswear. 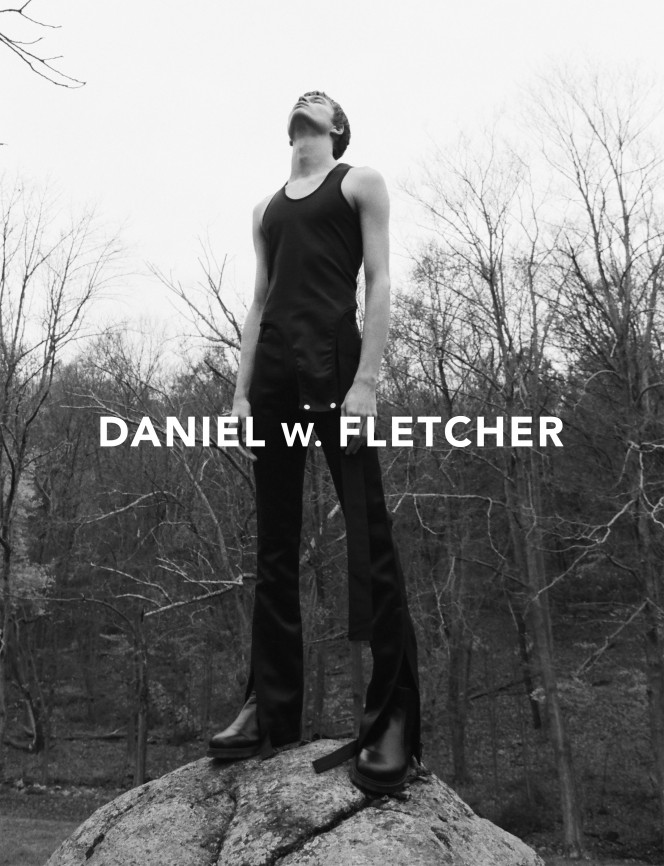 Jake Hall: You tend to reinterpret your collections through your campaigns. What was the story for this season?
Daniel Fletcher: This collection was inspired by American high school movies, so we wanted the campaign shoot to feel in the spirit of those – something that, on the surface, feels quite wholesome and has a preppiness to it, but then at the same is quite dark, and twisted. We went upstate in New York to Cold Spring and shot around the kind of big, old house you would see in those movies, to give it this weird spookiness.

JH: What drove the Americana vibe for SS20?
DF: I designed the collection right after I’d been in LA filming for a few months. I had gotten into the habit of getting back from set really late, and putting these old, American night school dramas in the background whilst I tried to catch up on the work I was missing in England. A lot of my inspiration comes from my own upbringing, British heritage and uniforms, so I looked at the same sort of references, but in American culture instead. I got really into looking at cheerleading uniforms and prom photos.

JH: This season saw a real deliberate focus on sharp tailoring, what inspired that choice?
DF: I made a conscious choice to make the brand a bit more formal this season. It was partly inspired by all of the prom tailoring I was looking at, but also it’s one of the things I enjoy designing the most, and I think menswear needs some new, interesting tailoring. Let the sports brands do the sportswear! Also, the work I’m doing at Fiorucci is much more casual, so I wanted there to be a point of difference between the two. 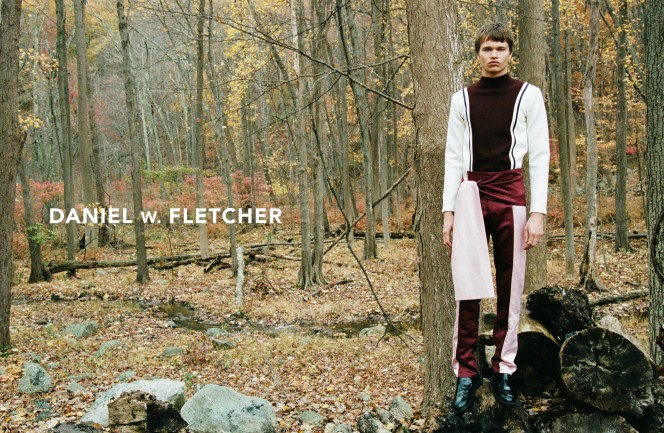 “I’ve been getting tonnes of messages from women asking me to do a second line, but I’m like, “Just buy the men’s stuff!” I know it technically says ‘menswear’, but what does that even mean?”

JH: Next in Fashion just debuted on Netflix, what was it like to be part of such a massive series?
DF: It’s been kind of mad this last week – we actually finished filming in June, so I’ve had months of waiting and going back to normal, but now it’s out there, so it’s all gone crazy again! The whole thing has been amazing though, I’m overwhelmed by how positive the response has been so far.

JH: The competition also kind of marked your first foray into womenswear. What was that like – is it something you think you’ll continue?
DF: I’ve been getting tonnes of messages from women asking me to do a second line, but I’m like, “just buy the men’s stuff!” I know it technically says ‘menswear’, but what does that even mean? They’re just clothes – anyone can wear them! There could be some fit issues, but everyone is a different shape and size anyway. I think, if I do launch womenswear, it won’t be too far away from what I do now. It’s different when you’re on a TV show, because I needed that showstopper moment. But in the context of my own brand, it would be more about altering my designs for fit than changing the style.

JH: What has the reception been like so far?
DF: People actually love the show – and even I did actually, I would have watched it even if I wasn’t on it – and I’ve had so many lovely messages. I’m in New York at the minute, so I went with Minju to Times Square to see our billboard. Just walking through the streets, we had so many people asking for photos with us. It was quite surreal. 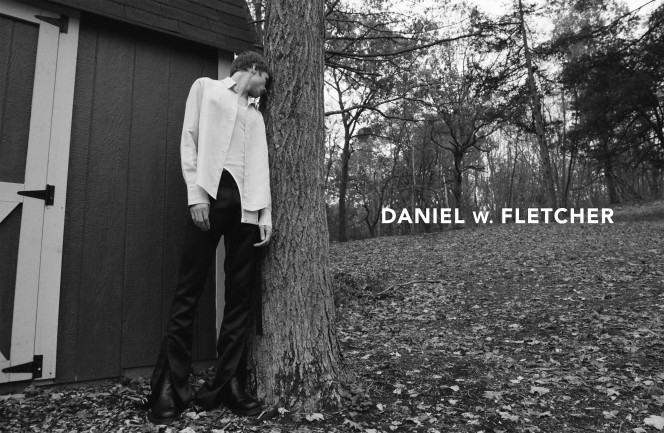 JH: What do you want viewers to take away from watching?
DF: I hope that people find watching it to be a positive experience, because it certainly was for me making it. I hope it encourages people to support each other more, too. Even as competitors, we all just really wanted each other to succeed. I think that was really refreshing, for a reality show.

JH: Your collections and campaigns are extremely story-driven. Have you always worked that way?
DF: I think it’s something I got from Kim Jones when I was worked at Louis Vuitton. He’s an excellent storyteller, and he really taught me the importance of having a narrative in your collections. It helps people connect with them, and it takes them to a place that isn’t just about clothes any more.

“If we don’t do something to combat climate change – which the fashion industry contributes to, hugely – then we won’t have a planet, let alone an industry!

JH: How do you balance running your own label with your work at Fiorucci?
DF: I don’t get a lot of days off, but that’s fine if you love your job as much as I do. The Fiorucci studio is in Soho and mine is in Hackney, so I split my week between the two and just make sure I’m really organised. This is my tenth season for my own label, so things are a bit more regimented now, which I think helps. I couldn’t have taken on an artistic director role a few years ago, but now it feels right. I’m enjoying having another creative challenge.

JH: As for menswear more generally, it feels like it’s a pretty transitional space right now. Where do you see it heading in the future, and what role do you want to play in that?
DF: I think sustainability should be the number one priority for every brand and consumer right now. If we don’t do something to combat climate change – which the fashion industry contributes to, hugely – then we won’t have a planet, let alone an industry! So I hope that, with my brand, I can continue to improve my sustainability practices, and also inspire and inform others to do the same.