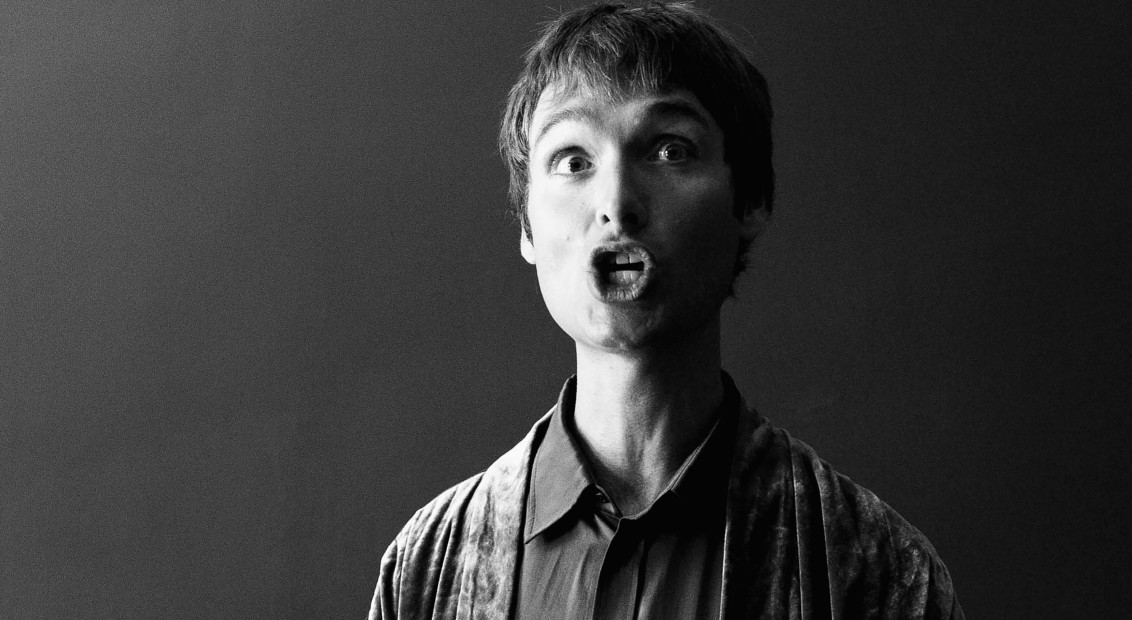 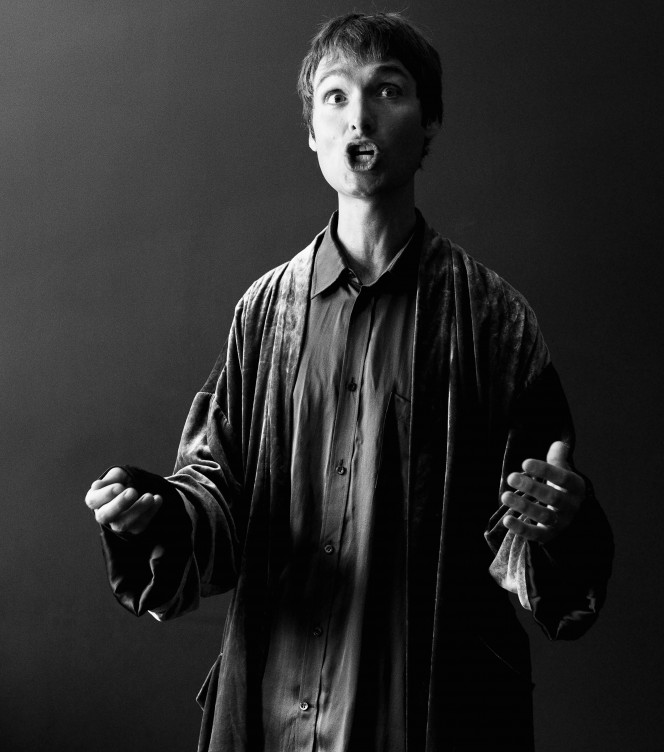 robe, shirt and trousers all by BALENCIAGA FW19; jewellery BILLY’s own

Arabella Noortman: Where are you from originally?
Billy Cancel: Originally I lived in the UK, I come from Cornwall. When I go back to visit my parents it’s like I’m hallucinating. I moved to New York because I was doing poetry performance in the south-west of England and I wanted to take it to a big city – a metropolis.

AN: Can you tell me about the New York poetry scene and what makes it special for you? I’m interested in whether there’s any cross-fertilisation in New York between different artistic areas such as music, art and fashion?
BC: New York is like London, it’s always changing. It’s in a state of flux, neighbourhoods change very quickly, cultural organisations rise, fall, regenerate themselves. What I like about art in New York is that people aren’t so set on how things ‘have to be’. It’s more a case of this energy is going around now, and we need to jump on that and get work done. There’s always this sense of dynamism which is really positive. And there’s always been a cross-over of poetry, art, music – I think it’s because people are willing to collaborate and just see what happens. So there’s fluidity in the institutions. My wife is a musician, and she and I perform as part of Tidal Channel [a band combining dense harmonies and poetry].

AN: Every time I visit New York I’m struck by how many young people there are making things happen.
BC: Oh Yeah. New York City has a lot of things similar to London but it’s more condensed in terms of space.

AN: The urban landscape is definitely more intense – it’s very much a city experience. Given you’re British, how do you find New York’s urban landscape shapes your poetic process, if at all?
BC: This is really interesting because neighbourhoods are changing all the time, some are actually unrecognisable from when I first moved – it’s such a quick turn over. So I think it’s almost like you have to try and align yourself as an artist in that environment.

AN: And how does that feed into your poetry?
BC: Well it’s a sense of juxtaposition, of movement, of contained energy – or more like trying to contain your own energy in the work.

AN: Your poetic form is really interesting, there’s a lot of sporadic capitalisation – I’m sure it’s very deliberate, but that’s quite unusual. Sometimes you just use a particular letter at the beginning of the word, or sometimes it’s a full phrase you’ve capitalised. I found that quite confrontational, not in a pejorative way, but it stands out. What is the effect and the purpose behind that?
BC: Every single poem is its own microclimate. There are lots of different voices flowing around, it moves between past, present and future, and sometimes it will have its own grammatical code in relation to that. So you might have a wholly capitalised word because they’re overwhelming, they hold the power in the poem. It might be a city, it might be a commercial, made-up noun, or it could even be a verb. But then after that, everything is down in a lower tense.

“What I try to do is take the aspect of language poetry and make it more playful, and more personable. You can mess around with language quite a lot but you gotta make sure it doesn’t turn…” 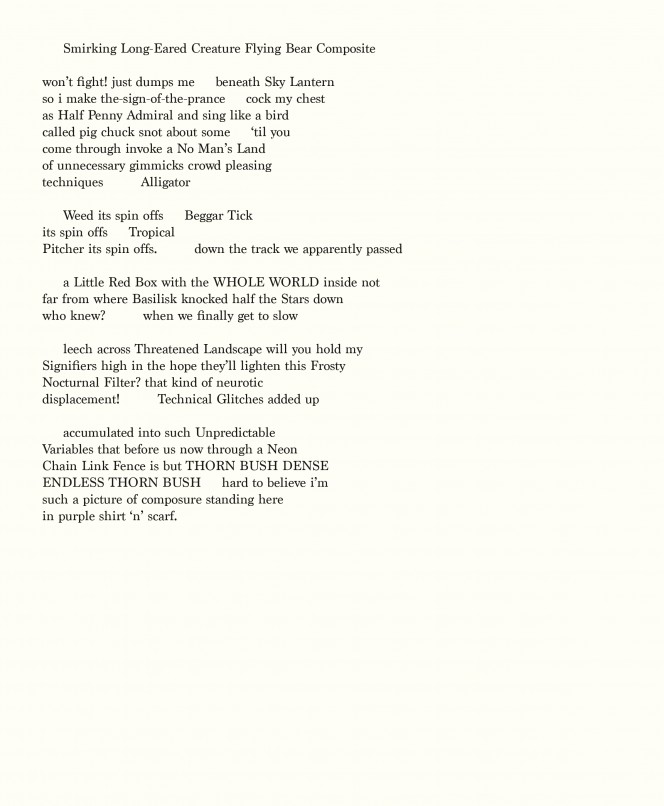 AN: I really love the way you juxtapose words, it reminds me of Edward Lear’s nonsense poetry – it jumps out, almost a bit Roald Dahl at points as well. Who are your biggest poetic influences?
BC: Firstly, I’ve always been obsessed with historical slang. So a lot of the words are from various studies on slang and terminologies in different parts of the world. I like to fuse them together. What I try to do is take the aspect of language poetry and make it more playful, and more personable. You can mess around with language quite a lot but you gotta make sure it doesn’t turn…

AN: Into complete nonsense.
BC: Yeah. I’ve always thought about Edward Lear, I was talking to someone about him last week and he’s someone who is good to read to kids. Arabella: Because he makes language exciting, and it’s very much about the sound. It’s interesting because, for the most part, words signify a correlating reality. When you deconstruct language and play around with it, you’re able to transcend language and its limitations, right? Billy: Yeah, it’s almost like making a piece of abstract art.

AN: I totally get that. When did you start writing poetry?
BC: I’ve always written since I was about twelve, thirteen.

AN: It’s been consistent?
BC: Yeah, but it got a bit more serious around university. I don’t really like the phrase ‘finding my voice’ but it does have some merit I guess.

AN: I think when people use it in a more generalised context it sounds a bit cringe, but as a writer you’ve got to own that.
BC: Right.

AN: Continuing the theme of form, the layout of your poems also feels really important, the deliberate spacing between words. Why do you do this as opposed to using punctuation, for instance? What is the effect of using those spaces and pauses?
BC: So first off, with the form of poems – because the whole thing can be such a vortex – I like the idea of having a short poem that I’m like, “This is gonna be crazy,” but you can see the beginning and the end of it. In terms of the pauses, really it’s the breathing space it affords. But even at the end of the poem, if you have no full stop, the assumption is that it’s an unsealed piece of energy.

AN: A kind of spiralling energy?
BC: Yeah exactly. So that’s the idea. I was very eager a few years ago, I was like, “I’ve got to get my first full collection published.” So I was trying to work out a format where I could just get my head down and write as quickly as possible, but in a cohesive kind of style.

AN: How would you like the reader to receive your poetry? Is there an underlying message you’re trying to communicate?
BC: There is a sort of darkness to it, and there’s a reflection of the uncertainty of the current times we’re in. But ultimately it is a celebration of language, and I’d like it to be considered like that.