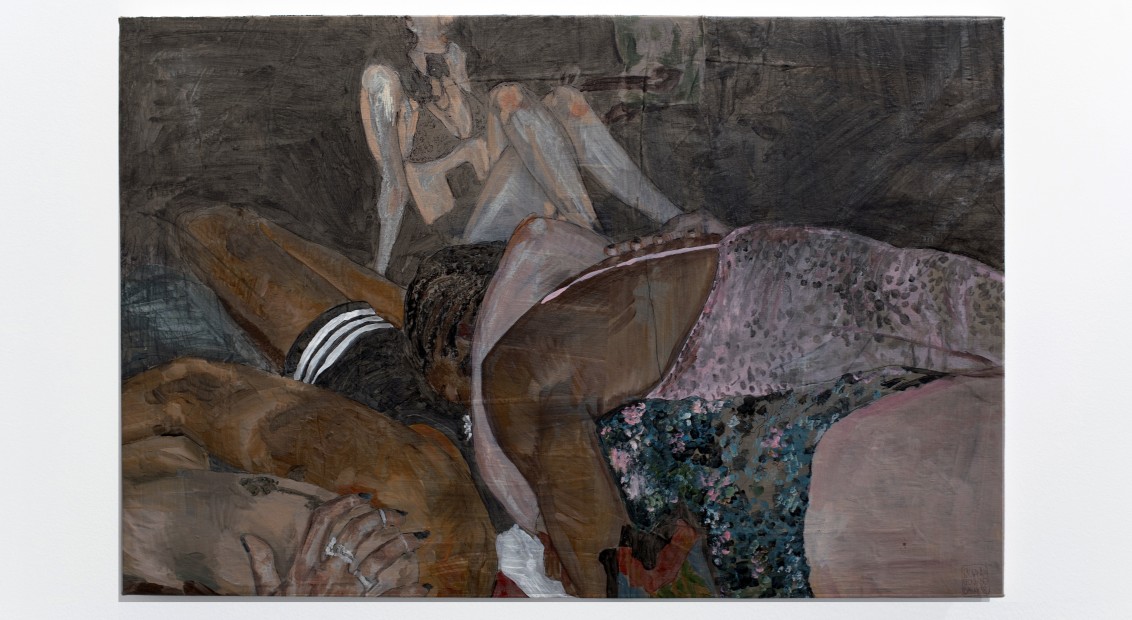 Deluge is the title of a triptych painted by the American artist Philip Guston at the end of the 60s, in a transitory phase that pulled him away from pure abstraction for more figurative painting. Deluge is also the title chosen by Paris-based artist Giovanni Leonardo Bassan for his exhibition presented in Paris by Dubai gallery, The Mine, taking inspiration from Guston’s search for real, tangible feeling in an everchanging decade. “When the 1960s came along I was feeling split, schizophrenic,” said Gustan at the time, “the war, what was happening in America, the brutality of the world.”

Like Gustan, Bassan’s latest body of work searches for its own reality. Hung on the walls of a long corridor, barely visible scenes of everyday life come alive with silhouettes defined by opaque contours. The movements are suggested by quick and unfinished brushstrokes, the voids are frequent and the texture is at times dense and grainy, at times a thin pencil line. These numerous narrative layers contribute to a multitude of possible readings: with intertwining bodies and changing forms, it is the gaze of the observer that defines which story to tell.

Within a historical moment in which the vision of the world becomes ever more volatile, crystallizing uncertainty by realising it on canvas can be an antidote to the transience of the moment. The work of Bassan challenges a chaotic, self-centered and ephemeral era, where more than ever there is a need for time to scrutinize, understand and make sense. 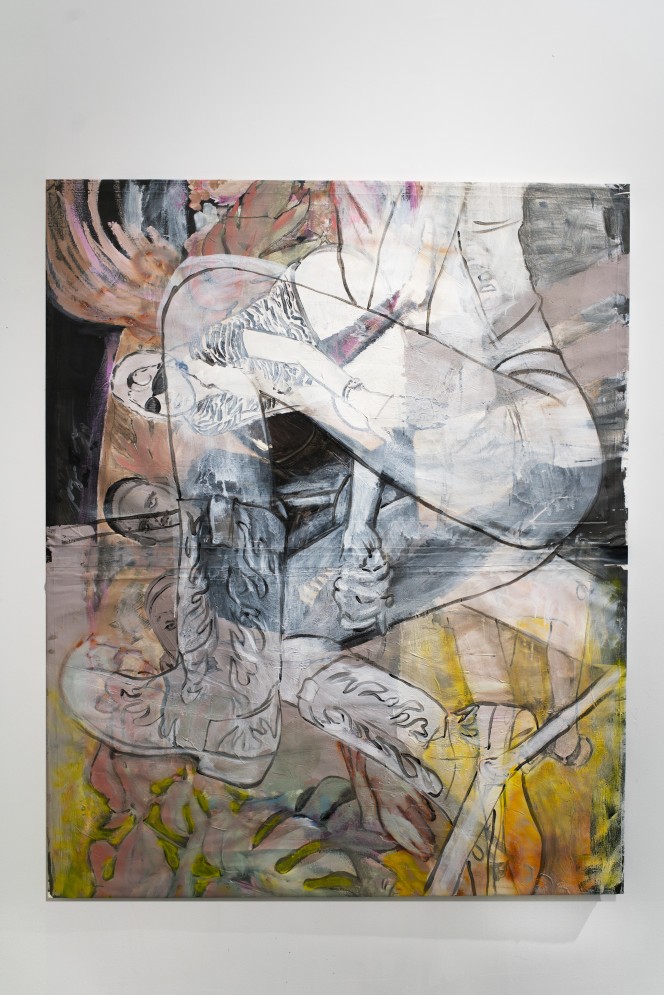 Giada Bucciarelli: In your paintings, there are bodies, faces, movements, but also voids, pauses and moments of suspension. Sometimes they are obvious contours, others only perceptible, almost like spirits in passing. What do they tell us?
Giovanni Leonardo Bassan: My subjects tell of us of the Paris where I live, of the scene I frequent. They are a glimpse of our era through the personal filter of my life and my experiences. They tell of environmental manifestations, raves and concerts, of a young and international talent scene that has yet to be reckoned with often hostile environments.

GB: In an age like ours, where the image is now at the centre of everything and the omnipresent representation, to you, what is the role of figurative painting?
GLB: I think that figurative painting is entering a new phase of definition. Technological developments and access to new digital representations push the need to search for new figurative forms. I believe that the role of art is to document current years, and in this sense figurative painting can become a mirror of what is happening. The difference between a painting and a photographic image is that paintings have the ability to not only return an image but to give life to a proper experience, and to push the viewer to move beyond the visible and penetrate it in order to better understand its nature. 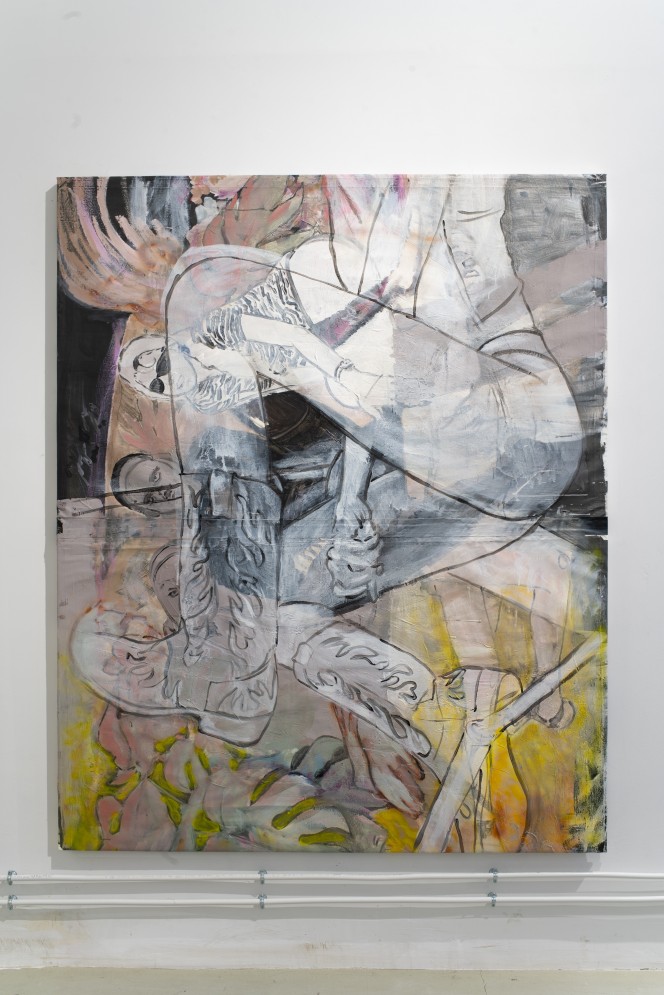 “They tell of environmental manifestations, raves and concerts, of a young and international talent scene that has yet to be reckoned with often hostile environments.”

GB: One of the most interesting aspects of your work is the compression of further levels of painting and therefore of reading the subjects depicted. In this system of overlaps, is time defining the depth of the experience and the duration of the spectator’s gaze?
GLB: In what I do, the relationship between figuration and abstraction is a fundamental aspect. I try to detach myself from the graphic signs defined thanks to the union of different figurative levels that allow me to achieve a detachment from the image itself and to create. Also thanks to the use of different materials – a universe of patterns, lines and colors that once finished are very far from the initial representation. I like to think that my work is changeable under the eyes of the spectator and that the more you look at it, the dizzier it becomes. 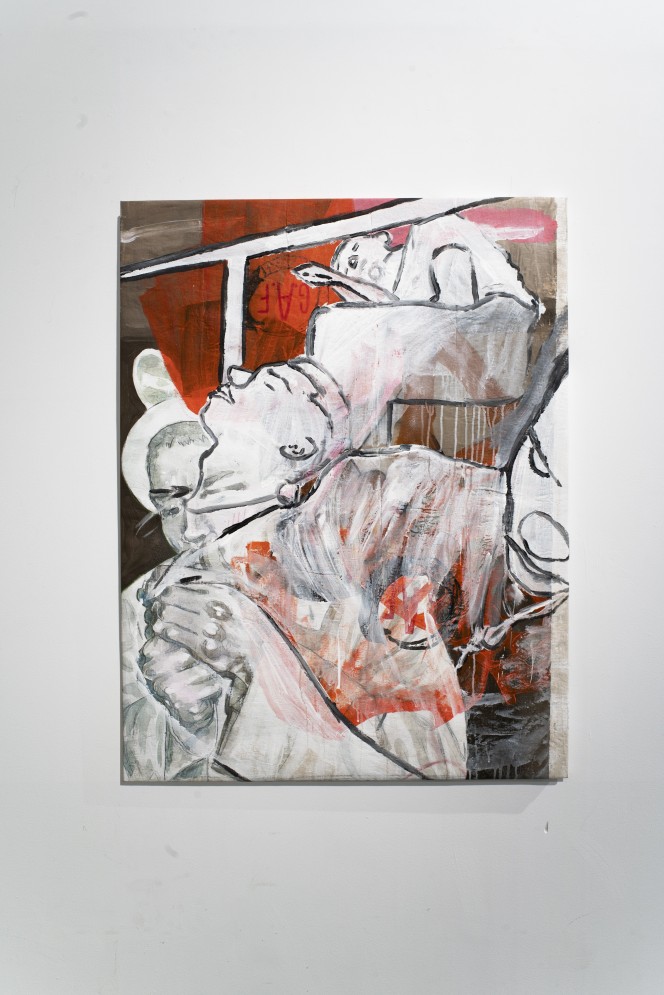 GB: How do you define the path that goes from the starting image to the final piece?
GLB: I can spend several weeks or even months working on the same canvas, during which the different scene works and then disappears or turns into something else. Usually I start selecting images from my photo archives and creating macro families from similitudes of subjects or similar chromatic forms. Then these images are translated on paper as sketches, with different positioning tests of the subjects in relation to the space of the artwork. Then I transport everything on canvas, where the real pictorial work begins. The supports I use are rough and represent a certain malleability, often changing size, format and incorporating different canvases that work as well as the adjacent and contemporary levels of narration. In this way I can pass from a clear and univocal basis to increasingly complex visions, where all the elements mix together, losing their outlines and transforming themselves into a continuous flow of visions – with images that show, disappear and sometimes even return.

“I like to think that my work is changeable under the eyes of the spectator and that the more you look at it, the dizzier it becomes.”

GB: What path do you see your work going in the future?
GLB: The pleasure of inserting more elements of randomness in my works, loosening up the control of the creation a little and letting it define itself more freely. I will certainly continue the research and development of the superposition of levels, both graphically and materially, in order to be able to brave a greater depth to physical forms. I would also like to transfer this two-dimensional work into a three-dimensional context, to translate the same approach into another creative language that is not limited to painting alone.