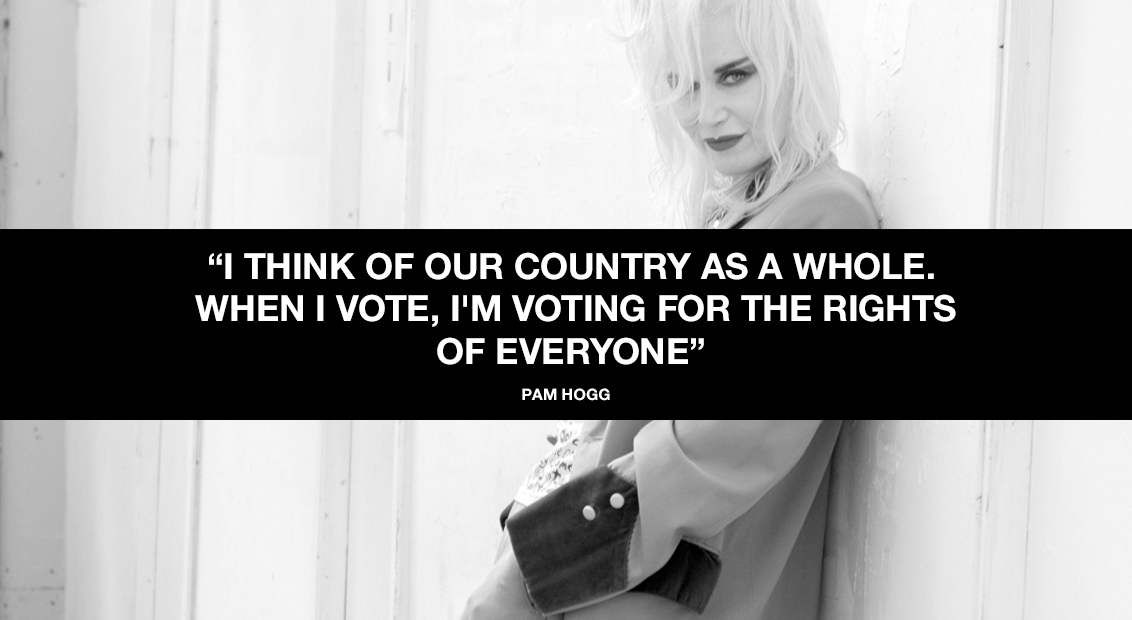 Pam Hogg on the 2019 General Election: “Labour’s manifesto matches the seriousness of the times”

Pam Hogg has always stuck to her guns and spoke her mind – traits that weave their way across the designer’s significant oeuvre. Having stuck her flag to the Labour mast early on in this 2019 election campaign, the Glaswegian is imploring everyone to get out and make their mark tomorrow.

An absolute stalwart of the British fashion world, (Dr) Hogg’s strident creative vision kickstarted when the designer moved to London in the late 70s and was instantly seduced by Covent Garden’s agenda-setting Blitz club and its peacocking patrons. Here, Hogg resorted to creating her own extravagant outfits to evade Steve Strange’s strict ‘go big or go home’ door-policy and, coveted by her contemporaries, she began to stock her lavish creations as part of the legendary Hyper Hyper boutique. Fast forward to now, and those DIY halcyon years are still prominent in Hogg’s work. Synonymous for her second-skin latex catsuits – each one holding more star power than most designers can muster in an entire lifetime – the designer possesses the ultimate power: bridging grit and glamour.

Below, Hogg takes us through the thinking behind her voting decision and why she believes that Jeremy Corbyn’s Labour party are the only ones representing real, positive change in Britain.

VOTE Elvis PARTY T .. singing Teddy Bear in the 90s for a fundraising charity.. put an ❌ in your diary now for the 12th Dec and remember to register to vote! #votelabour

How will you be voting in this election and why?
“I will be voting Labour. For me, it’s an easy choice as I can only vote for a party led by someone who truly believes in the common good and the good of the country. With Labour, you know the interests are not ego or self-interest led or built on backhanders and deceit.”

How do you feel the outcome of this election impacts your peers in your industry? And more broadly, the future generation?
“I think of our country as a whole when I vote – I’m voting for the rights of everyone. We need to make this country better for a future to exist. Labour’s manifesto matches the seriousness of the times.”

“For me, it’s an easy choice as I can only vote for a party led by someone who truly believes in the common good and the good of the country.”

What are your priorities in this election?
“It’s vital to readdress the balance between rich and poor. There’s a proportion of extremely high earners who give back without question and should be applauded, but rigorous taxes on the poor are shameful. Family is eroded by the massive problems and harm this causes. Kids with no direction, knife and gun crime, the list is endless. National Health service, Climate and Green issues. Human rights, gay rights. Education, including eliminating racism in all its forms. Housing. Labour has thoroughly addressed all of the above, and they mean it when they say they are open for further discussion.”

Anything else you’d like to say on the subject?
“For many, there doesn’t seem to be a future. The ultra-rich have the opportunity to make changes and their contribution is vital. It’s important to educate the ones in this bracket of society who see giving back as having something taken from them. If they could reverse their thinking greed could be eliminated, it’s just a matter of will.”