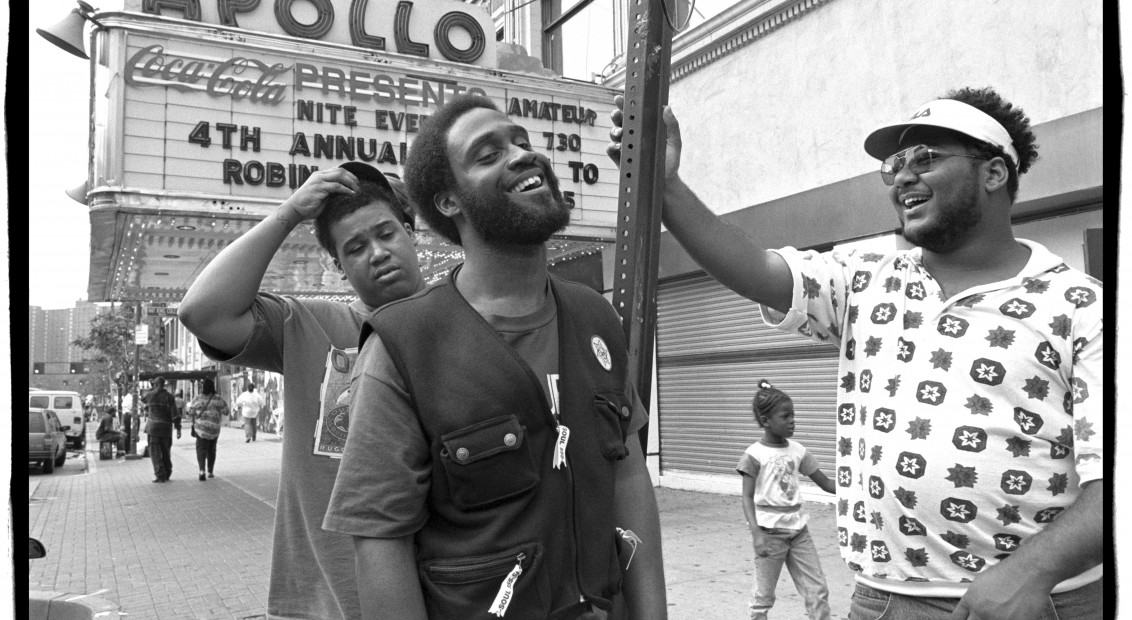 In the late 1970s, the Bronx was on fire and resembled the scene out of a post-Apocalyptic movie. But as New York slid into the 80s, the raw hunger to express, create and disrupt emerged from the ashes of frustration. “Got a bum education, double-digit inflation/can’t take the train to the job, there’s a strike at the station,” Grandmaster Flash raps on The Message, delivering a statement on the economic and social conflicts of the time. The rebellious ethos of punk culture could now be found in the early DNA of a burgeoning hip-hop movement where disappointment and hope were directed through rhythm. It was the birth of hip-hop and there were two photographers in particular who played fundamental roles in capturing this moment in history: native Londoners Janette Beckman and David Corio.

In collaboration with Getty Images Gallery, 10 Corso Como NYC is presenting Beat Positive, a new exhibition of photographs exploring the dawn of hip-hop culture from 1981 – 1993. Featured in the exhibition is the legendary work of Beckman and Corio whose images chronicled the faces of hip-hop’s genesis. In their portraits of artists such as Run DMC, Slick Rick, Salt-N-Pepa, Grandmaster Flash, LL Cool J, and Afrika Bambaataa, a sense of purity and even playfulness is captured. Beckman and Corio first discovered hip-hop in ’81 while working for magazines such as NME, The Face, and Melody Maker.

“Nobody knew that hip-hop was going to be so big. In fact, when I covered that first show for Melody Maker back in the day, the writer wrote something like, ‘It’s just a passing fad like skateboarding,’” muses Beckman below. Needless to say, that writer couldn’t have been more wrong. 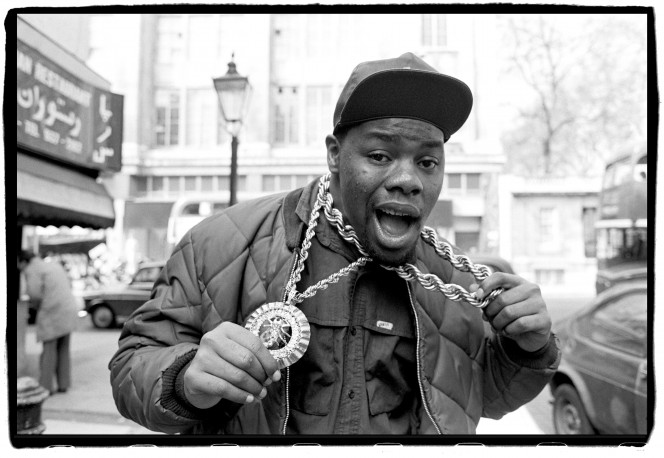 J.L. Sirisuk: What were your first experiences of hip-hop – what led you to this movement?
Janette Beckman: I came out of art school and punk was happening all around in London. I started to photograph the punk scene and worked for weekly music magazine Melody Maker. In ’82 the first-ever hip hop review came to London and I went along to photograph the people that were going to be in this concert at the hotel. The people looked so amazing and different. They had this really cool style and great energy – it was very different from the punks that I’d been photographing. Punk was kind of dark, kind of angry, while hip-hop had a different type of energy, a very upbeat energy and the people were excited to be there. It turned out that I’d photographed Fab 5 Freddy, Dondi, Futura, the Rock Steady Crew, Afrika Bambaataa.
David Corio: The first time I ever went to New York was in 1981. I was walking up the West Side Highway on a Sunday and came across the Roxy club and people were practicing breakdancing, so I popped in and photographed the kids practicing their moves – that was probably the first time I ever really heard hip-hop and then it started coming to London soon after. I’d been shooting a lot of rock and some indie bands for NME and was getting really bored with it – they were all talking about suicide and it was very miserable stuff so I started working for Black Echoes. I had been more into soul, funk and reggae so that led me into photographing a lot of black music and hip-hop was just beginning to get big over here.

JLS: Janette, you captured the rise of punk and then the hip-hop scene at its purest, are there certain qualities shared between these two worlds?
JB: Both of them are rebel movements. Punk came out of London – people didn’t have money, there was really no future for kids, there weren’t gonna be any jobs. People would come out of school and there was a huge unemployment problem. That’s what punk was born from, that’s when groups like the Sex Pistols and The Clash started singing about the way they were feeling and what life was like for them. They were singing about revolution and trying to change things. Hip-hop was almost exactly the same thing. New York was broke, there were no possible jobs for kids coming out of the Bronx, they weren’t seeing a good future either and they started rapping. Grandmaster Flash’s The Message – if you look at the lyrics you see exactly what New York was like at the time. The kids basically had no money, they made music and art from what little they had.

JLS: This exhibition spans the years 1981 to 1993. Given your experience, how has hip-hop changed since then?
JB: In the beginning people had no money. Our photoshoots never had stylists, we never had hair and makeup people, there were rarely art directors. It was just me and the group. We didn’t have a system so there was no production and it was very authentic and pure. These groups that David and I were photographing were at the start of their careers. When I photographed Run-DMC in ‘84, nobody really knew who they were, and I photographed Salt-N-Pepa before they even had a record deal. They were passionate about what they were doing and it wasn’t like these days where they were looking to make huge amounts of money. They were looking to have their voices heard and make their art.
DC: It’s become a lot more controlled and contrived in probably the last 20 years. Back then I don’t think people really regarded it as a major sort of force. It was kids having fun and doing their own thing, when record companies got wind of the fact that they could make a huge amount of bucks from these people, they thought, “We need to control it, we don’t want them looking a bit rough or dishevelled. They’ve got to look right, they’ve got to be wearing the right clothes.” It certainly lost its innocence more than anything and that’s what I think this exhibition shows, the fact that back in the day it was more natural and innocent. 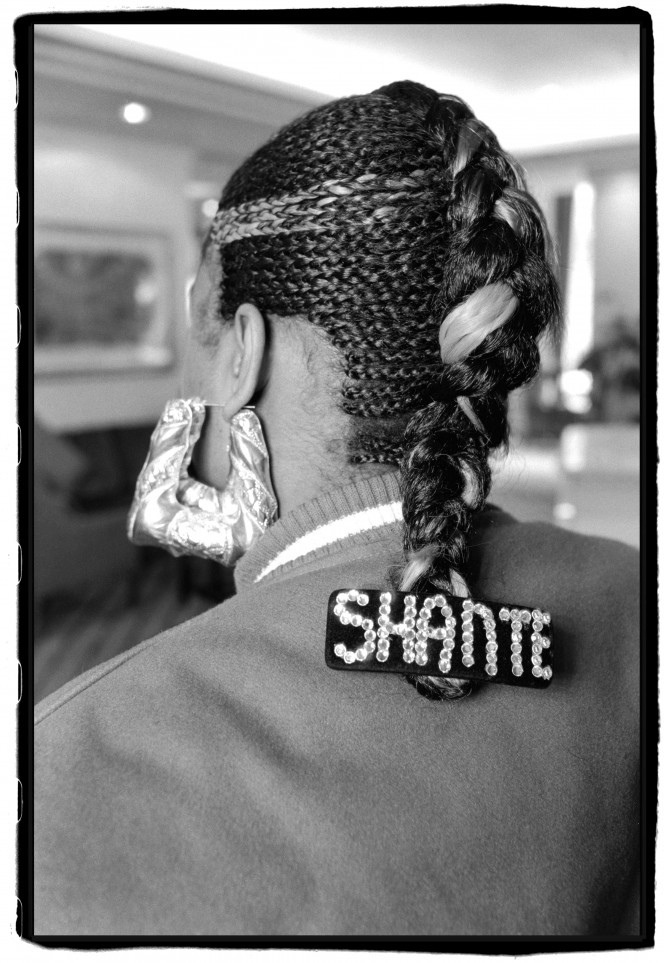 JLS: What qualities do you appreciate in the other’s work?
DC: Janette covered the scene when there was a real innocence about it. She captured that really well before all the record companies and art directors and managers got too involved. She was there to shoot more of an honest image, she’s always been good at capturing people looking comfortable in their own skin.
JB: I’ve always been a huge fan of David’s photography. He’s a great portrait photographer and his prints are absolutely gorgeous – he makes all of his prints in a darkroom. We complement each other – my work maybe a little more colourful. I tended to work for a lot of small record labels doing album covers and they wanted colour, Salt-N-Pepa or EPMD.

JLS: There are times when you don’t realise the cultural impact of a photo until years later. Is there a specific image within your body of work whose significance you feel has developed over time?
JB: My photograph of Salt-N-Pepa. There are three girls standing and they’re wearing these eight-ball jackets which are actually made by Dapper Dan. This photo of these three strong women looking directly into the camera with so much style and attitude has come to represent women in hip-hop.
DC: There’s one in the exhibition of Afrika Bambaataa. The picture that’s in the show is just a silhouette of him with all this graffiti – the background is a huge canvas that was spray-painted by Dondi and Futura 2000 when they first came over in ‘81. The show had finished, I went to the bar to have a beer and they killed all the lights except for the ones on the back of the canvas. Then Bambaataa came on to pick up his records from his record deck – a total silhouette so it could be anyone really. It sums up that age I think very well, the fact that it was record decks and graffiti, it summed up something a bit more than just a live show. 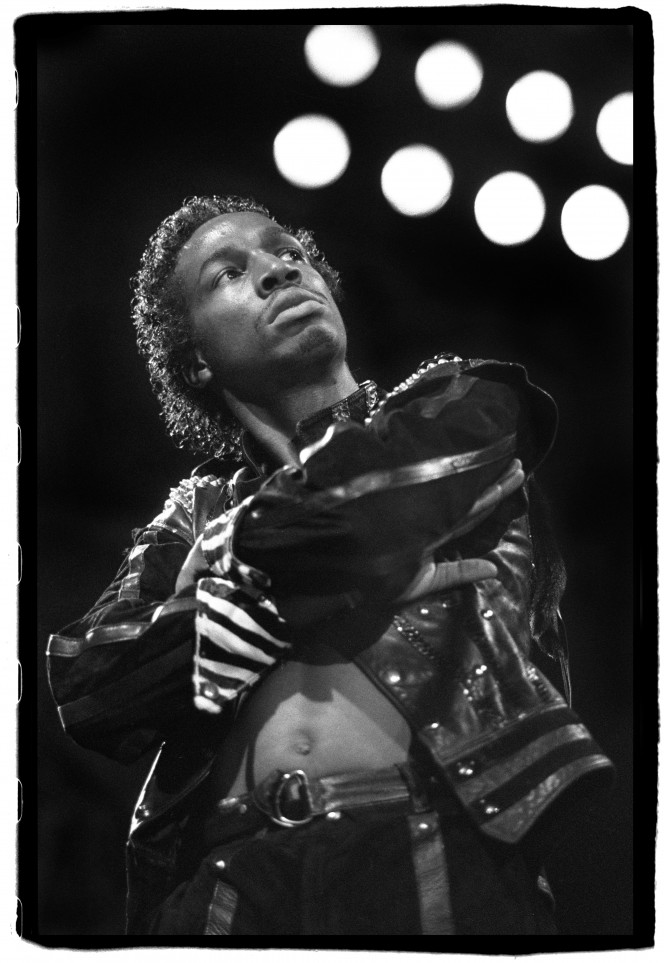 JLS: When you look at your body of work, how do you feel?
DC: I’ve been lucky enough to meet a lot of heroes in many areas of music and have tried to capture people in their best light in order to record their personality. I guess that’s always in the eye of the beholder more than anything. I feel fortunate that I’ve been around to photograph a period – from the late 70s to the noughties mainly for me, when there was so much great music going on.
JB: I was this young British woman with a camera in New York City in 1983, just going to the Bronx to take a photograph of Afrika Bambaataa or up to Brooklyn or Hollis, Queens to photograph Run-DMC. I was just running around with my camera and these people who didn’t know me were so accepting of me, and I feel incredibly privileged to have been at the dawn of such an incredible movement that has influenced world culture today. Hip-hop might have influenced more culture worldwide than anything else because people are rapping in Palestine, people are rapping in Senegal, people are rapping in Australia. Nobody knew that this little thing that started in the Bronx was going to turn into this worldwide phenomenon.