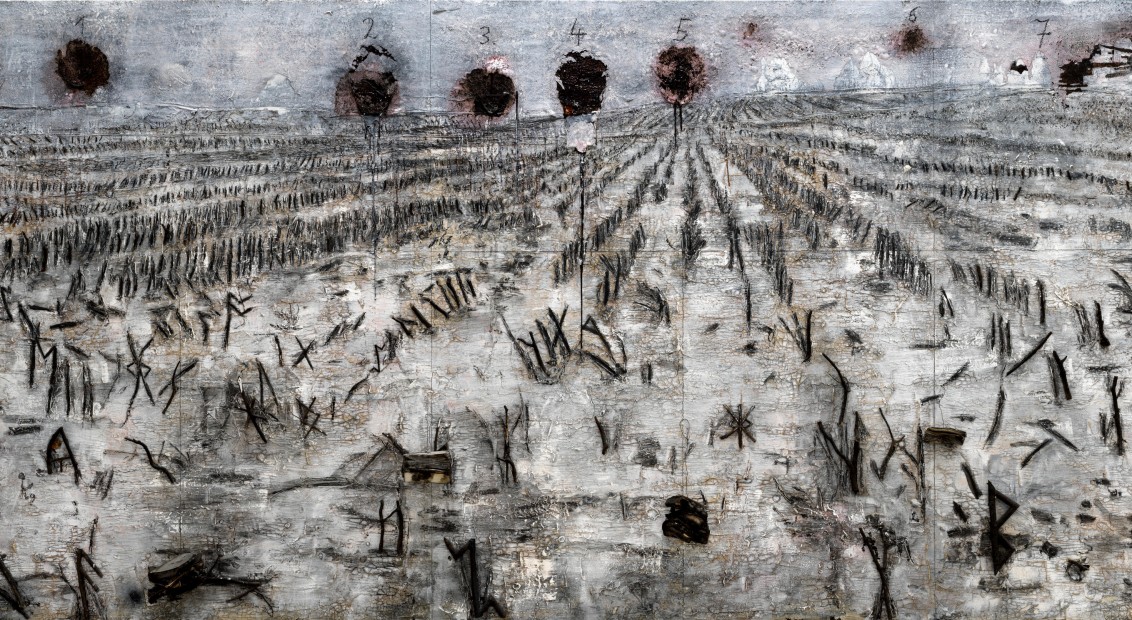 tales of gods and men

tales of gods and men

For his twelfth solo show at White Cube Bermondsey, German painter Anselm Kiefer presents Superstrings, Runes, The Norns, Gordian Knot, an exploration of world systems and macro mechanics on a scale befitting of its subject.

Visitors to Kiefer’s Walhalla show at the gallery in 2016 will recall the transformation of Bermondsey’s polished interior into an apocalyptic ward lined with lead walls and rusted hospital beds. For this show Kiefer has mined from a similar mythological vein, replacing that metallic cavern with an equally imposing set of thirty 4m high glass vitrines that run the length of the gallery’s corridor. Within each, a twisted mass of densely entwined plastic tubing references the undecipherable confusion of string theory, but also the impossibly tangled Gordian Knot, which Alexander the Great supposedly cleaved in two with his axe to rule all of Asia.

In the remaining gallery space, immense paintings of desolate wastelands and scorched earth recall horrors of the 20th century while offering a bleak glimpse into this planet’s infected future. Sublime in both subject and scale, these tactile canvases encrusted with branches, twigs and straw present life and death, decay and rebirth, science and myth as false dichotomies, equally capable of informing a theoretical framework with which to understand our universe. Through reference to string theory, the esoteric “theory of everything”, alongside equally impenetrable Nordic runes and complex mythologies, Kiefer’s new body of work points toward questions of fate, destiny and unknowable consequences, “What holds the world together at its core” in the words of Goethe.

Below, Dr Alan Macniven, senior lecturer of Scandinavian Studies at University of Edinburgh, shares his interpretation of Kiefer’s rich use of narrative and symbolism. From runes and Norns to tales of Odin and an eternal winter, Macniven’s expertise contextualises the paintings within the bloody yet beautiful stories of Nordic mythology. 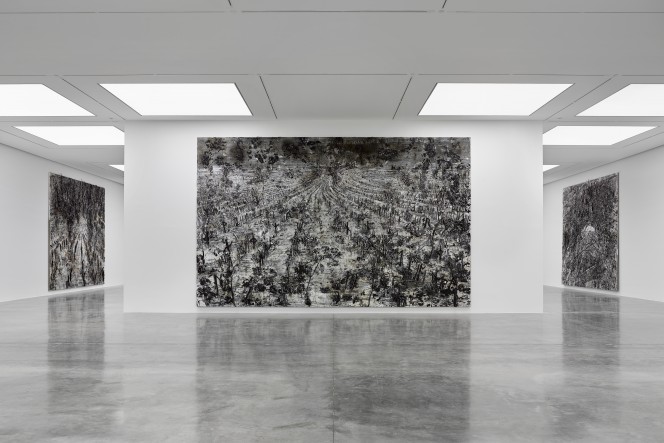 Choosers of the Slain

“According to Norse mythology there are two kinds of dead people, the valiant dead – people who died nobly in battle and, for want of a better word, the ignoble dead, people who die from old age or illness. Every ignoble dead, regardless of how good or bad they’ve been, end up going to a place called Hel, not the Christian Hell, it is the realm of the dead ruled over by a female figure called Hel.

They wait there until the battle at the end of time and then they depose the gods. The other half of the dead are split. So half of that half is promised to the goddess Freyja and they go and live with her in her hall, Fólkvangr. The other half will spend time with the god Odin in his halls of Valhalla, where they become part of his personal bodyguard. He doesn’t choose himself, he tasks some female entities to do that for him and those are the Valkyries, choosers of the slain. Metaphorically they fly over the battlefields and select Odin’s share of the dead and as a reward for their valiant existence, they get to spend the best part of eternity fighting and feasting.

There’s a really famous poem preserved in the later Medieval Icelandic saga called Njal’s Saga. It takes in at one stage the battle of Clontarf, which took place at Easter in the year 1014. While it was all happening there was a man in Caithness (northern Scotland) whose name was Dorrud. He had a vision and we’re told:

Blood rains from the cloudy web
On the broad loom of slaughter.
The web of man grey as armour
Is now being woven; the Valkyries
Will cross it with a crimson weft.
The warp is made of human entrails;
Human heads are used as heddle-weights;
The heddle rods are blood-wet spears;
The shafts are iron-bound and arrows are the shuttles.
With swords we will weave this web of battle.

What we’ve got here is female figures, Norns, Valkyries, deciding the fate of man. So you have this imagery of webs and weaving and if we look at The Veneziano Amplitude you can see what looks like a whole series of webs which have been strung up. So webs of fate, webs of destiny, to my mind it’s very dramatic, it’s grim and it’s bleak – perhaps the future isn’t necessarily positive.” 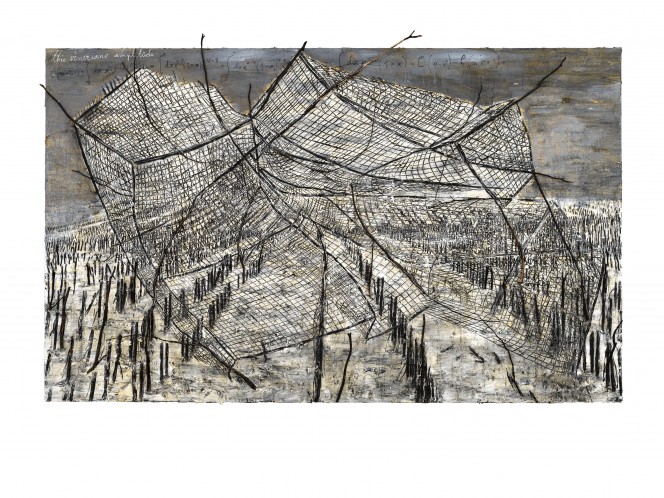 “One or two works have hints of red in the corner, which is very visceral and I think can be taken as a symbol of life, whether that’s life spilled or life burgeoning. They’re all very wintry and something to bear in mind is, in the cycle of the universe in Old Norse mythology, unlike the Christian god who goes on forever, the Norse gods come into existence, they have a high point and then they die and it starts again. So it mirrors the cycle of nature.

Before the final battle, Ragnarok, which means the doom or fate of the gods, there are many signs which beckon its coming, a bit like we have the Book of Revelation and signs for the apocalypse in the Bible. One of those is an enduring winter, a winter that lasts for three years, it’s called Fimbulwinter. These are all about fate somehow, they’re very wintry and maybe that’s something to do with the approaching apocalypse.” 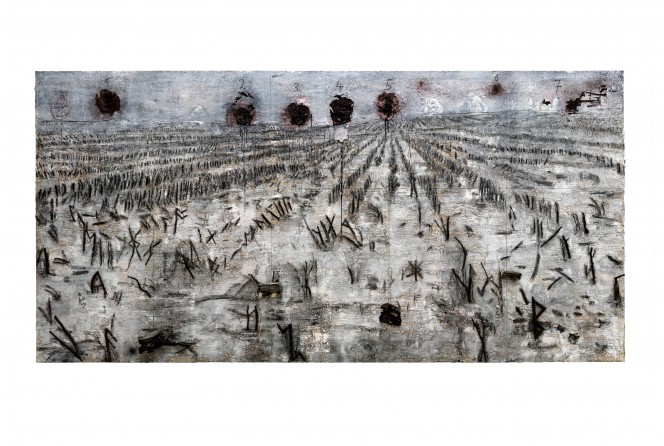 “Although things are burned and twisted and we’re in a winter stage here, is the painter trying to tell us that fate has run its course, that these people and their beliefs are gone but we can see echoes of them?”

“There’s evidence for the use of this specialist set of letters in the Germanic-speaking world about 1800 years ago. Of course they’re most famous for being used by the Vikings 800 or 1000 years later, before they became Christians. But in the early years for which these runes are attested, they weren’t used the way we use our letters, as an accessible form of mass communication, or of common literacy, they had a very restricted user base. So we believe those early runes were used for magical purposes, perhaps you had to be specially educated or initiated to understand them. The Roman author Tacitus, tells us something interesting things about how these early German speakers are believed to have lived their life. One is about their religion:

They attach the highest importance to the taking of auspices and casting of lots. The usual procedure with the lot is simple, they cut off a branch from a nut bearing tree and slice it into strips. These they mark with different signs and throw them onto a white cloth. Then the stakes priest offers prayers to the gods and looking up towards heaven picks up three sticks one at a time and according to which sign they have previously been marked with, makes his interpretation.

Other scholars would disagree but I think it’s really obvious we’re dealing with runic inscriptions. They’ve been used at a very early stage to help commune with the gods and define the future. Maybe that’s what we’re seeing here, although things are burned and twisted and we’re in a winter stage, is the painter trying to tell us that fate has run its course, that these people and their beliefs are gone but we can see echoes of them? Or is he trying to perhaps suggest that things are bleak but if we look for the patterns we can find hints of the future and maybe some of those are positive.” 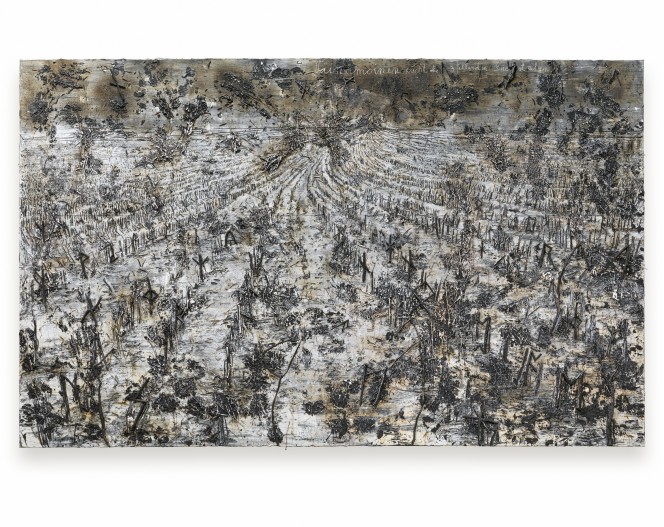 “The word Norn has evolved over the years. It exists now in modern Icelandic and it can just mean a witch, but if you go back far enough it has other meanings. Lots of Norns are mentioned across different sources but there are three main ones to name-check that live in a work called Snorri’s Edda. So these three Norns live by a well, in English it’s called the Well of Fate and there, these three women have various jobs.

The Well of Fate feeds one of the three main rooms of the huge ash tree, Yggdrasil, which is the axis of existence, all the worlds in the North cosmos are connected to it. One of the jobs of these Norns is to keep this tree alive, so everyday they take some nutritious water from the well and they smear it over the trunk of the tree to keep it nourished. But they have other jobs and this is reflected in their names and ties in with what we’ve been saying about runes. In Old Norse their names are Urð, Verðandi and Skuld and these names roughly translated mean ‘fated’, ‘becoming’ and ‘shall be’.

In Snorri’s Edda we’re told in a bit more detail that they manage the fate of men. So this is interesting because we’re getting a picture now of a cosmology which in one sense everyone will be familiar with, it is very male-dominated. There are women but usually they’re supporting characters, but the creatures and entities which seem to have a major say over the life cycle of birth, fate and death are all female.”

Anselm Kiefer, Superstrings, Runes, The Norns, Gordian Knot is on at White Cube Bermondsey until 26 January 2020.