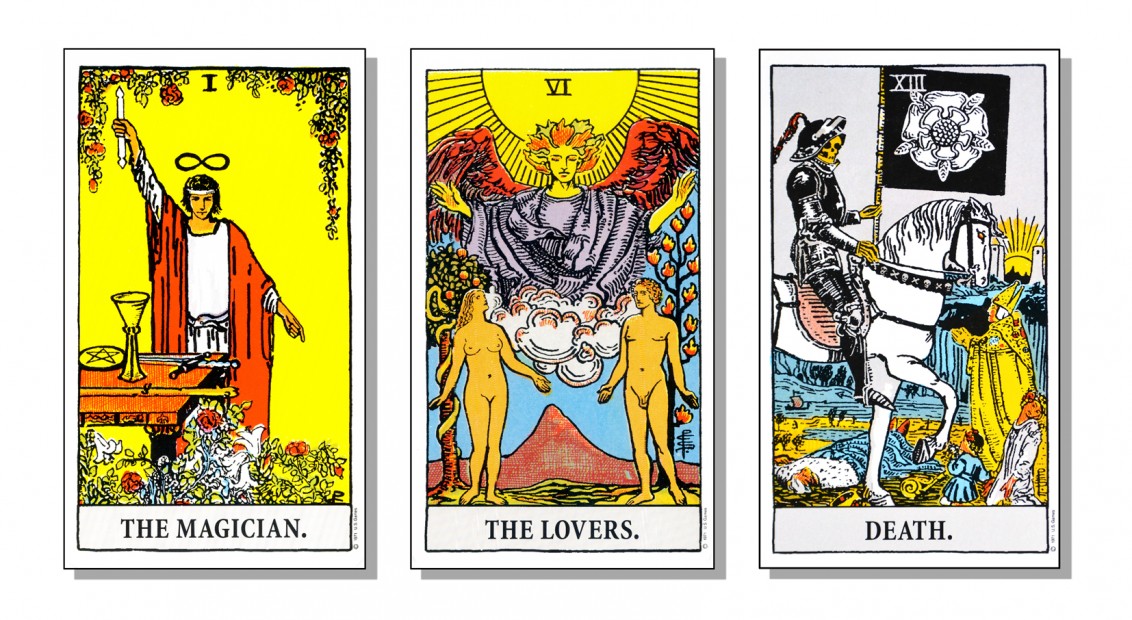 Having drawn people to its magic for centuries, tarot reading has become one of the most recognised tools of divination used today. With imagery blending ancient symbols, religious allegories and historic iconography, tarot cards hold meaning that crossover between physical to meta realms, illuminating our most complex dilemmas and desires.

It’s said that the history of using cards for divination dates back to the 14th century, likely originating with Mamluk game cards brought to Western Europe from Turkey – meant simply as a game, without mysticism in mind. However over time and epochs, tarot cards were adopted by different cultures and adapted to suit their wants and beliefs, such as 18th century occultists, who used tarot cards to further their esoteric philosophy and the infamous Thoth tarot developed by Aleister Crowley. There are also those who believe tarot cards to be the sole surviving “book” from the great fire that burned the libraries of ancient Egypt, within this theory the cards are considered to be the hieroglyphical keys to life. Tarot’s ambiguous origins only add to the practice’s mystique, and continues to beguile.

Here, we provide the ultimate guide to reading Tarot.

What is tarot? Well, a deck consists of 78 mystical cards, 22 of those being Major Arcana and the remaining 56 cards being Minor Arcana. Tarot’s are mostly used for divination, to ask for advice from our ancestors for self-development. Each card contains an image, a name and a number, which all have their own meanings. The tarot is not evil nor spooky, unless the person who chooses the cards has those bad intentions in mind, it is beyond good or bad and rather reflects the energy of that moment to the reader, projecting what we already subconsciously think or feel. It is a way to find your inner voice and wisdom. In contemporary culture, people fear the tarot because of films and popular culture which show the tarots as bad omens, yet the tarot is merely a mirror to the soul and therefore, will only project evilness if you, yourself, are evil.

The Major Arcana, meaning ‘big secrets’, represent the fundamental energies of life, highlighting the most basic issues and underlying motivations. These are 22 qualities which permeate all mankind and draw out our deepest reactions. Each card has a name, some are ideas or themes, others are an individual who personifies said themes. Each has a number known as an Arcanum; 1 to 21. An astrological interpretation also resides in each card as well as keywords or phrases.

Cards and their meanings:

The fool represents impulse and infatuation as well as a desire to blind the truth. The fool is childlike and pure, meaning it can be unpredictable. This card can mean you are blind to other’s advice and are careless with promises, it is mostly a warning to look before you leap, if you are confused about a decision, the fool implies that it is time to believe in yourself. Sometimes the risk is the best option. 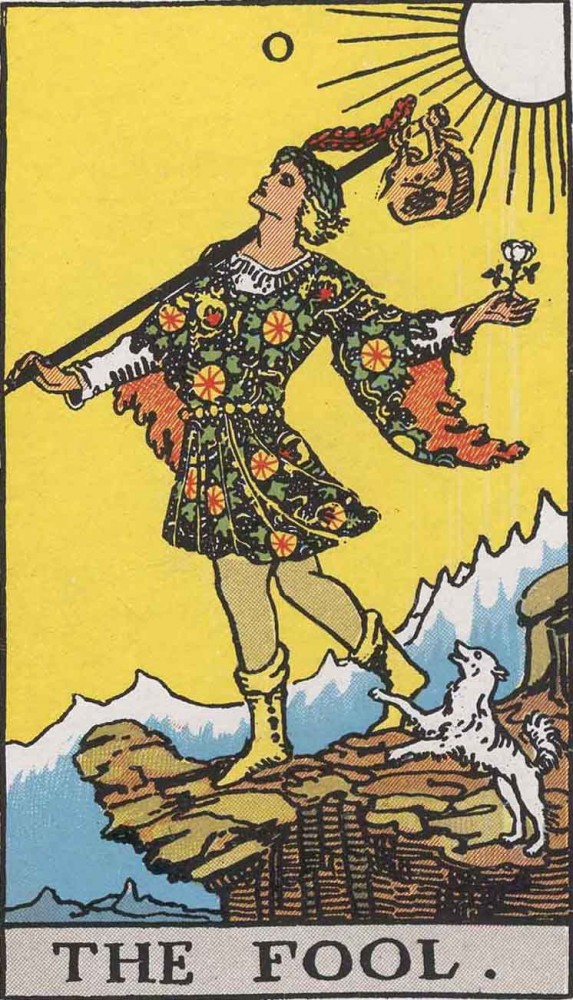 The Magician likes to get results. He symbolises the bridging effort between the inner and outer you; your unconscious desires. This card asks for flexibility, communication and to listen to your inner voice, to make your own choices and do so confidently. Acknowledge your intentions, the truth and always practice what you preach.

This card is all about secrets, hidden feelings and the unconscious. The High Priestess is the archetypal symbol of the unknown, she represents the interface between the real world and other realms, meaning when you draw this card, look beyond the veil. The High Priestess also represents the feminine and can suggest you need to figure out your feelings towards someone or something. You must develop your awareness to understand what you truly want.

The Empress represents action, pleasure and abundance. This card is concerned with nature, the arts, greed, beauty, grace and over-indulgence. If you have a relationship question and this card appears, it may indicate the need to motivate your partner or mother them, or that there is possibly another woman in their life.

Representing power, authority, leadership and the power of reason, when you draw The Emperor card you have authority and know what you want or need. Everything seems to go your way. However, when considering a partnership, it suggests that you need to take control of that relationship. The Emperor is attracted to strong, dominating characters, power-trippers and cold-hearted lovers. Be strong, structured and organised to achieve your goal when this card appears. 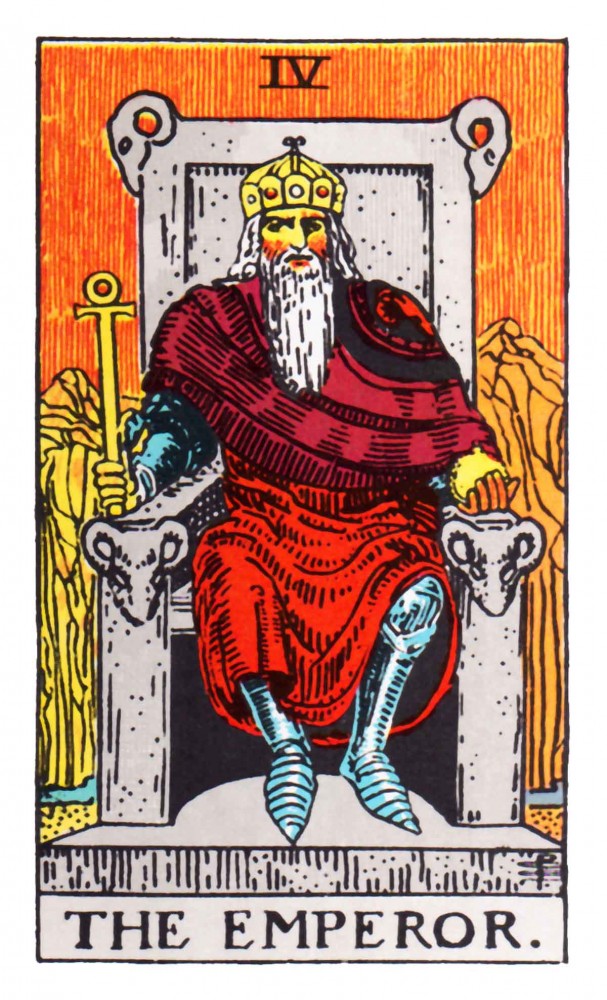 This card is all about respect and tradition – traditional rules being of greatest importance. The Hierophant indicates that you must seek the guidance of someone who acts as a guru or mediator in order to move ahead with your plans. It also suggests you should let go, clinging to the past is not healthy and you must move forward with guidance from your spirits. The most important fact of this card is that you should trust your beliefs and stick to them.

The Lovers card is far more complex than being just about love. The image on the tarot states that even though we are different, we find someone to belong to and with, someone who sexually or emotionally fulfils us. This card asks questions: are you happy? Do you love your partner? Will your partner commit to you? This card poses questions surrounding the concept of love rather than telling you directly what it is. 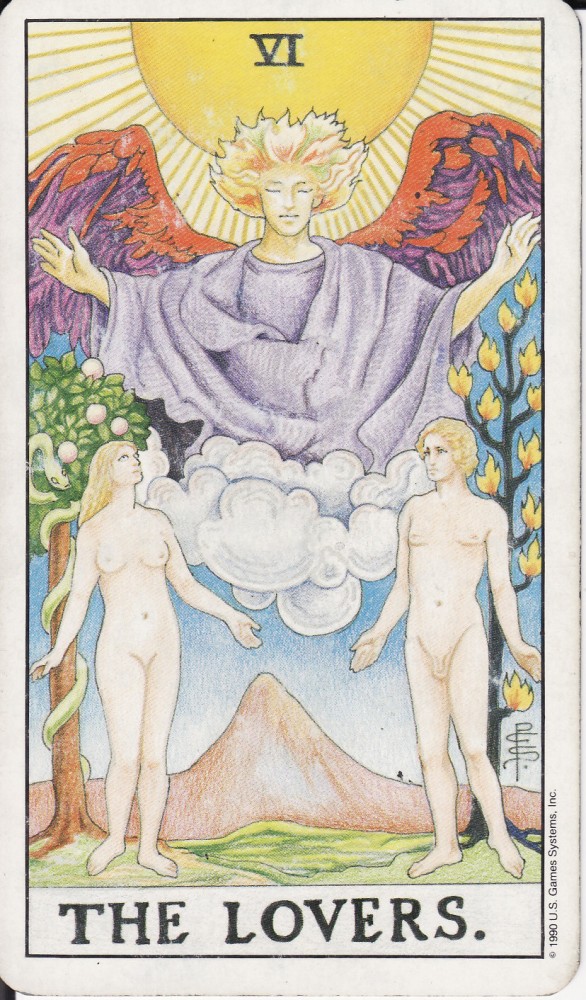 The Chariot is about motivation and willpower. You must have self-belief and a healthy ego when you pull this card; you have reached a point in life where you can stand up for your own beliefs. This card suggests that self-belief and a control of extraneous forces is the best way to achieve what you desire – you can master your emotions and get your own way.

Strength does what it says on the tin, the card is not about physical strength but compassion. If you ask your cards about love or romance and this one appears, think about whether you are giving too much of yourself away. Be self-aware, tolerant of others and always remember your compassion.

The Hermit represents the most secretive part of ourselves, it reflects our need to look within the tarot’s answers and undergo some soul-searching. This card tells you to avoid rushing into plans, think long and hard before committing yourself to any long-term plans. The Hermit also suggests that you need inner balance, as well as a guide or spiritual guardian who you can put your faith and trust into. Sometimes this tarot asks for stillness, calm and reunion. 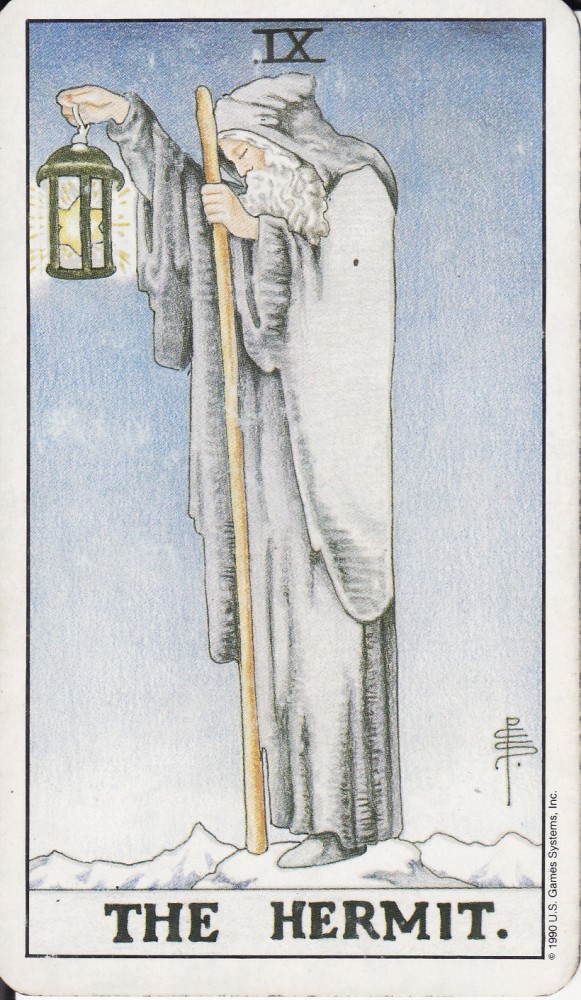 The Wheel of Fortune:

The Wheel of Fortune is about luck and chance, it’s up to you to make those choices in order to improve your lifestyle. Selecting this card signifies that you are in charge and ready to start afresh. Don’t think the world is against you, now is a new beginning. Take action.

A card of harmony and equality, Justice asks you to think logically and objectively, to find the whole truth and nothing but the truth. Be rational in your thoughts and know that you’ll get what you deserve.

The state of being in limbo, of trying to solve something cryptic. You may be stuck at a crossroads if this card appears, or you may be in a rut. The Hanged Man tells you to let go of emotional baggage and that soon enough you will be released from any pain or emotional hurt. 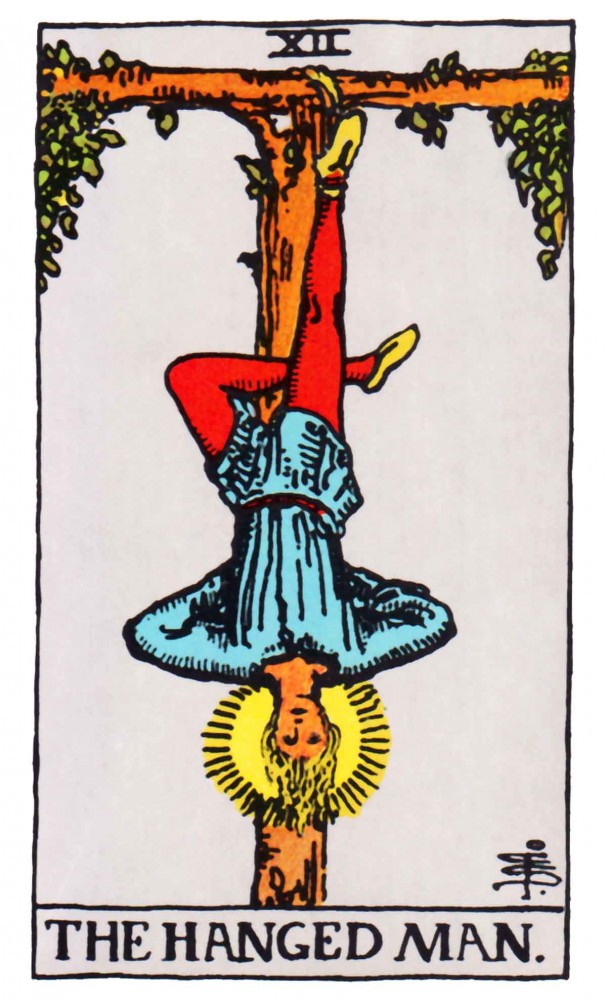 DO NOT TAKE THIS CARD LITERALLY. The death tarot simply means that one door has closed and another will open. It says that something is no longer needed in your life and has or will, come to an end. You may wish to end a relationship but are unsure, this card is a green flag to do so or to end something within that relationship which is causing pain. 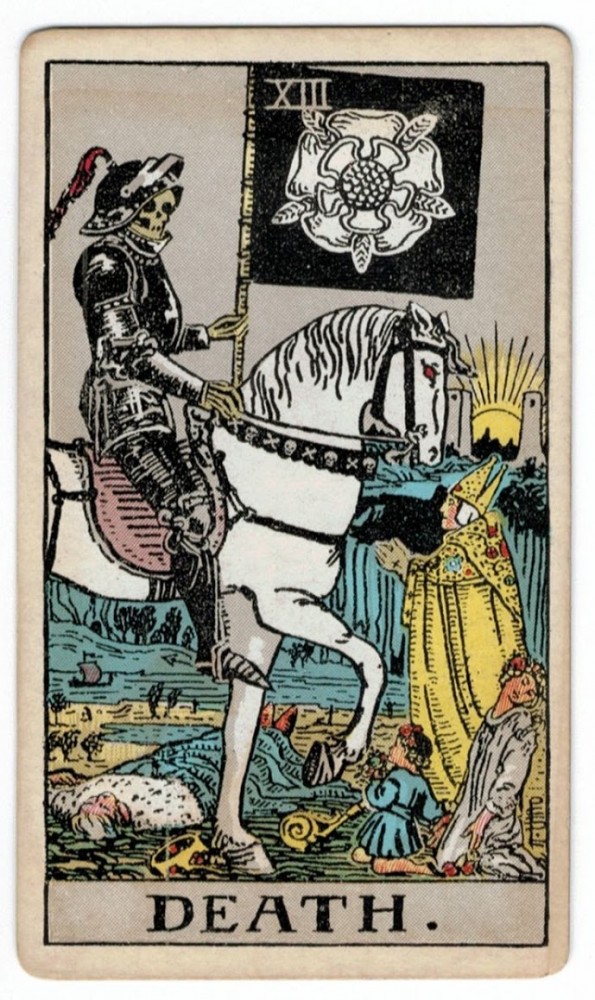 Self-control and moderation is needed when this card appears. Finding the middle ground will help achieve your goals; you will find a solution somehow. This card tells you to moderate your desires, to see both sides of an argument and find harmony.

The Devil appears when we are in the dark and asks us to accept our limitations. You may be ignorant of the truth or blind-sighted, this card is drawn to make us question our beliefs and assumptions. 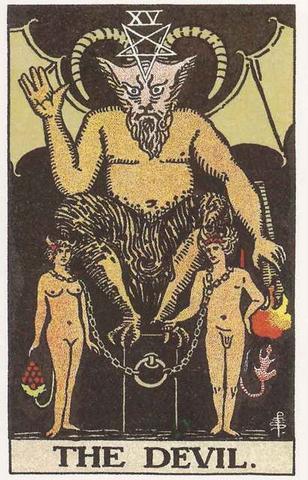 A symbol of revelation, the lightning strike on the Tower tarot reminds us that something needs to change and that our inner world can be just as unsafe as our outer. This card asks you to welcome new challenges rather than avoid them.

The Star represents all the heavenly bodies that guide us. Your power is at its highest when this card is pulled. Hope, belief and trust in the future is foreseeable. The star gives you navigation to wherever you want to go, however this card can also suggest that your expectations are too high.

Deception, fear and illusion are all present in this tarot, suggesting that things may not be what they appear to be. Perhaps you are wrong or have misjudged something. It can indicate that you are wrapped up in your own beliefs and feelings, and that you cannot see rationally anymore.

With a focus on communication, joy and positive energy, The Sun is a positive card, giving us inspiration and direction. It encourages us to move on. To leave the shadows behind and to live your life. Grow in the sunlight.

Judgement tarot speaks of liberation; to liberate yourself from old attitudes and move forward. You may feel guilty for something you’ve done or feel judged by others, perhaps it is time to take responsibility for your actions. This card can also indicate an ability to forgive yourself or someone.

The World card symbolises freedom and cosmic love. You may be convinced that everything is going your way or that too often you think wishfully without actually acting on these thoughts. Perhaps it is time to take an objective look at yourself and your goals. 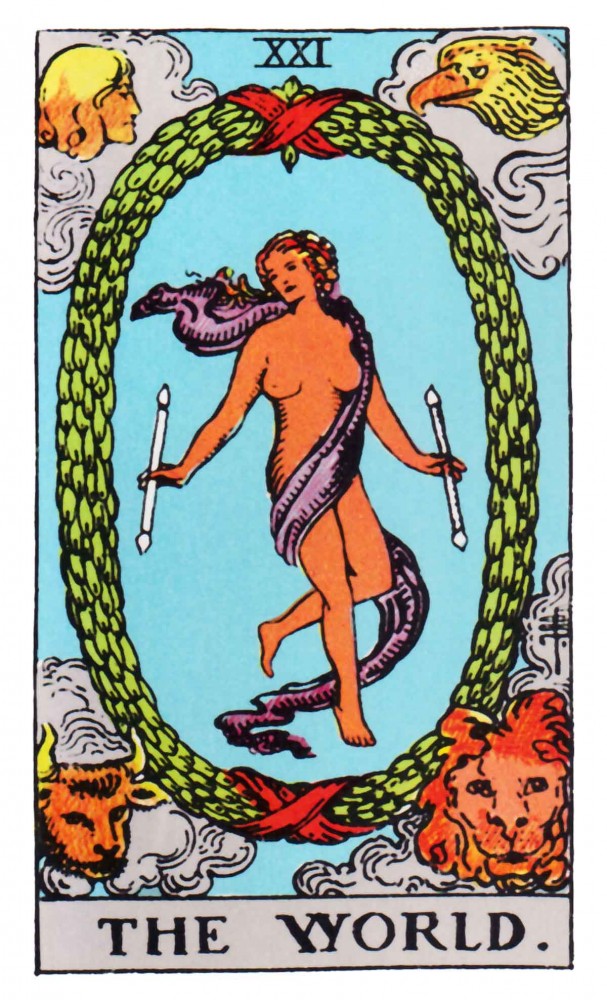