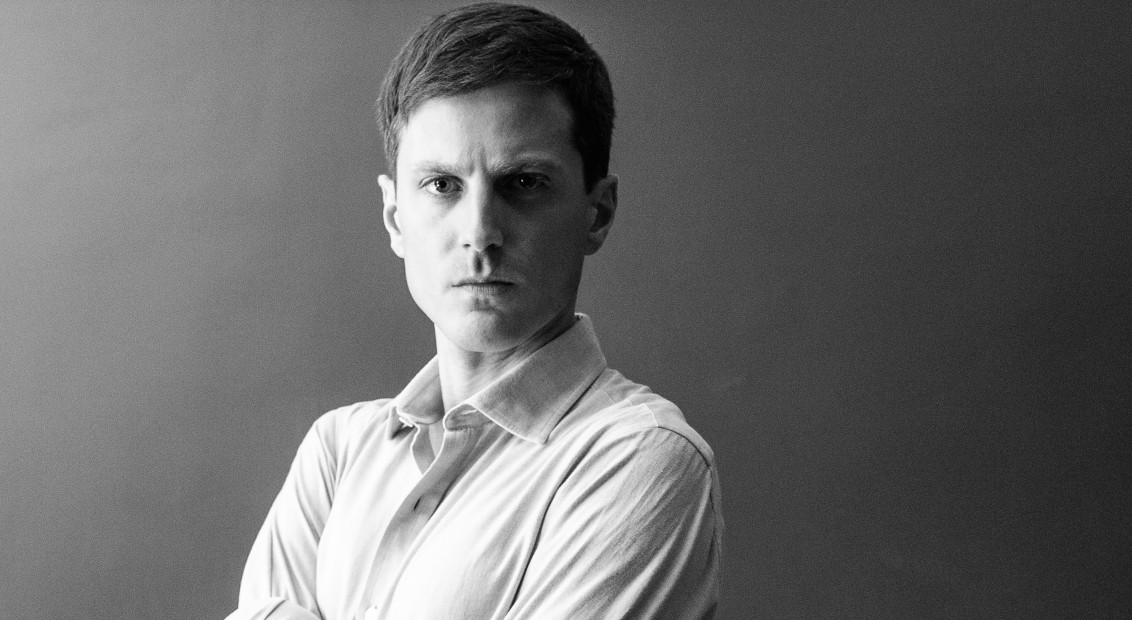 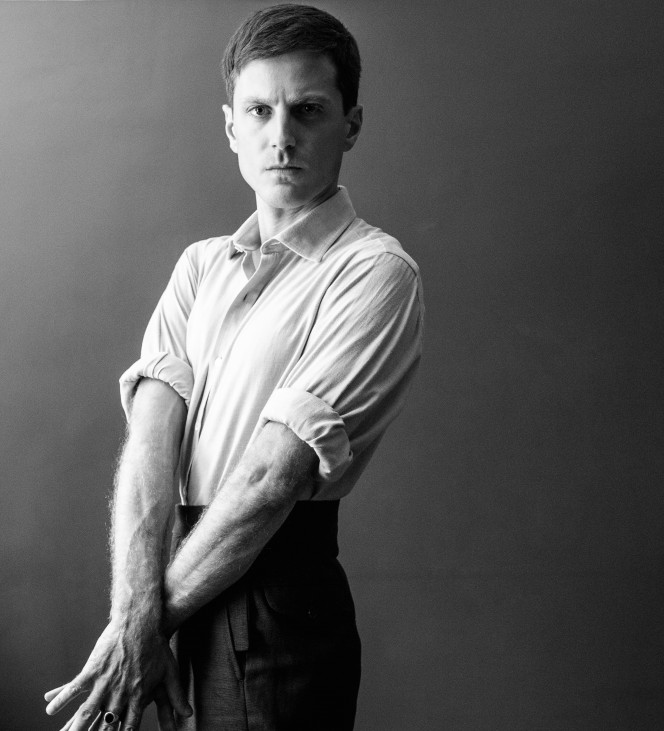 shirt by HOLLAND AND HOLLAND FW19; trousers by BODE FW19; jewellery PABLO’s own

Arabella Noortman: You reference the ‘soul’ in your poetry. I was interested what you understand it to be, how you define it, and whether you think poetry has a special relationship with the soul?
Pablo Conejero López: Of course, it’s a very broad idea but I think the soul is basically our essence. It’s something we’re not able to be in touch with necessarily in our day-to-day lives; but it’s who we really are. I feel like our soul is our purest form of being, the deepest and most essential part of us. So I believe that it’s what we’re talking to when we are writing or doing something creative, or dreaming. When you’re awake and you are trying to be creative, it’s not an easy state to connect to; but when it does happen, that’s when it becomes special. I mean the point of all this is basically to connect with yourself, and with the rest of the world.

Arabella: Spiritual connection.
Pablo: Absolutely, that’s why we do it, because we need to talk to people in ways that we aren’t able to in our regular lives.

Arabella: In your recent poetry book Cuerpos, you say, “A writer doesn’t know where his knowledge comes from.” It begs the question of where does this knowledge come from? Through dreams? Through these almost alternative states… I thought that was really interesting.
Pablo: Yeah I really liked that idea and of having power within you. We definitely have the ability to make things real, to create things, but at the same time I really believe that sometimes we just have to open up.

Arabella: Surrender and let go…
Pablo: That’s the most difficult thing to do because we are conditioned by so many things, being advanced modern humans, but we’re not as advanced as we think we are. It’s more advanced to be able to just forget about everything and open yourself up.

Arabella: Well that’s when you connect to a higher feeling, right? When you stop being so fearful, clinging on…
Pablo: And judgment, and all the things that we are constantly doing to ourselves and to other people – basically by just having a preconceived opinion about how everything is supposed to be, and how we are supposed to be. Many Eastern cultures say that where we live is a very damaged place – even though it’s more modern and advanced.

“I can’t really define myself in any way; most of the time I feel like I really don’t know who I am or what I’m doing.”

Arabella: I feel that there’s something very universal about your poetry, and yet you use the word ‘I’ a lot. I’m interested to what extent your poetry reflects your particular personal concerns, and to what extent are you going above and beyond yourself in order to reach the universal human experience?
Pablo: I really believe there is no real sense of self. I have the feeling that I don’t really know who I am most of the time. I just ended up this way because of my circumstances and my reality, but we’re definitely channelling the energies of the world and the energy of the universe with our bodies. I think that the personality doesn’t really exist, and I have that feeling with myself often: in a constant identity and personality crisis. I can’t really define myself in any way; most of the time I feel like I really don’t know who I am or what I’m doing.

Arabella: I feel that anxiety in your poetry, this kind of existential anxiety in relation to self, and especially the relationship with other – sexuality, relationships, love, being seen by the other.
Pablo: It’s interesting to hear what you think because sometimes I don’t even realise, I suppose it’s just my version of existence. Most of the time I feel like I have no clue what I’m doing.

Arabella: I think that’s a good thing. It’s about that balance isn’t it, between allowing yourself to be almost semi-conscious when you’re writing, letting it flow, and then having a level of consciousness.
Pablo: Yeah, what we do needs a bit of a structure sometimes.

Arabella: But it’s not a cure.
Pablo: It’s not, it’s a way of dealing with it, basically. It’s a way of channelling the energy.

Arabella: That makes a lot of sense to me. I also noticed, in terms of your form, there’s a distinct lack of punctuation in your poetry. I wondered why you do this and how conscious it is?
Pablo: That’s actually something I’ve come up with over the years because I feel like when you’re writing poems, sentences and thoughts can be very ambiguous, so the aesthetic of a poem sometimes feels cleaner when there’s nothing – you’re just following the tone and the structure of the sentences. Sometimes there’s no need for punctuation, perhaps there are commas and dashes to help you move through, but it’s purely an aesthetic decision.

“I think that the personality doesn’t really exist, and I have that feeling with myself often: in a constant identity and personality crisis.” 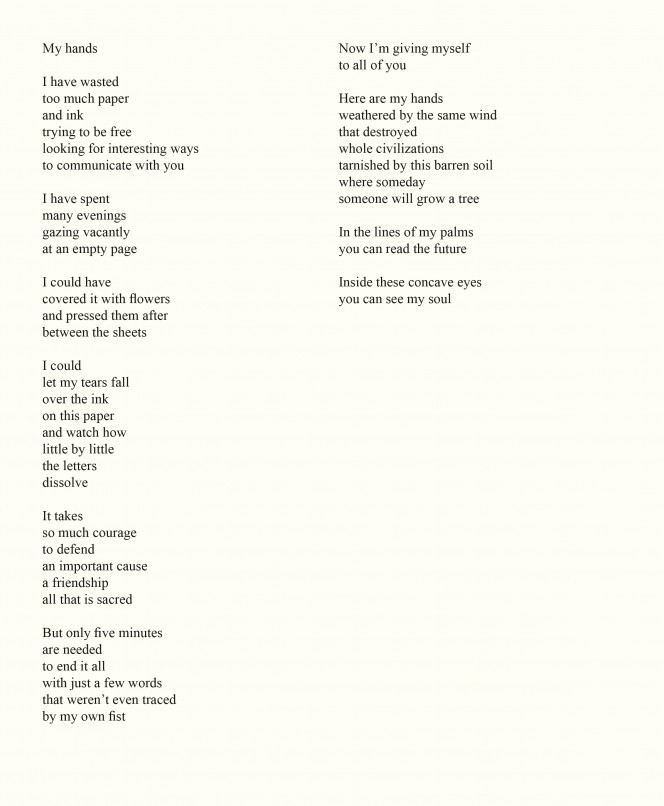 Arabella: I saw there’s a Spanish translation, how does that play into your work? The fact Spanish is your mother tongue, do you have a preferred language to write in?
Pablo: I got into writing poetry while in England as I spent a lot of time there as a child. Then it turned into a purely adolescent experience, when you experience music and film and things like that. Life ended up putting me with a group of people making songs, and because of my cultural association I started writing lyrics in English, and then more lyrics and more poetry. I got to a point when I was older where I had a very deep and strong need to re-connect to my Spanish side, and express my love and respect and appreciation for the Spanish language.

Arabella: So reclaiming your identity almost?
Pablo: Sort of, or a side of me that I needed to re-connect with, to acknowledge and recognise. I feel like I needed to level things out culturally.

“I got to a point when I was older where I had a very deep and strong need to re-connect to my Spanish side, and express my love and respect and appreciation for the Spanish language.”

Arabella: It’s interesting in the context of Bob Dylan winning the Nobel Prize for Literature [in 2017]. I’m intrigued by the intersection between music and poetry, and songs and poetry – what constitutes a song, what constitutes a poem, and where the intersection lies. How does songwriting influence your poetry, and where do you draw the line?
Pablo: For me, it’s all the same. There’s no real difference. The same as I think that all art is really the same, it just manifests in different ways. The difference between a song and a poem is when you write a poem, you have to correct it over and over, not overcorrect but…

Arabella: Edit.
Pablo: Edit, exactly. You have to because you read it over and over, and you notice things that could be better, the same as when you’re painting, you notice detail that could be sharper or less sharp, you erase and you paint over it.