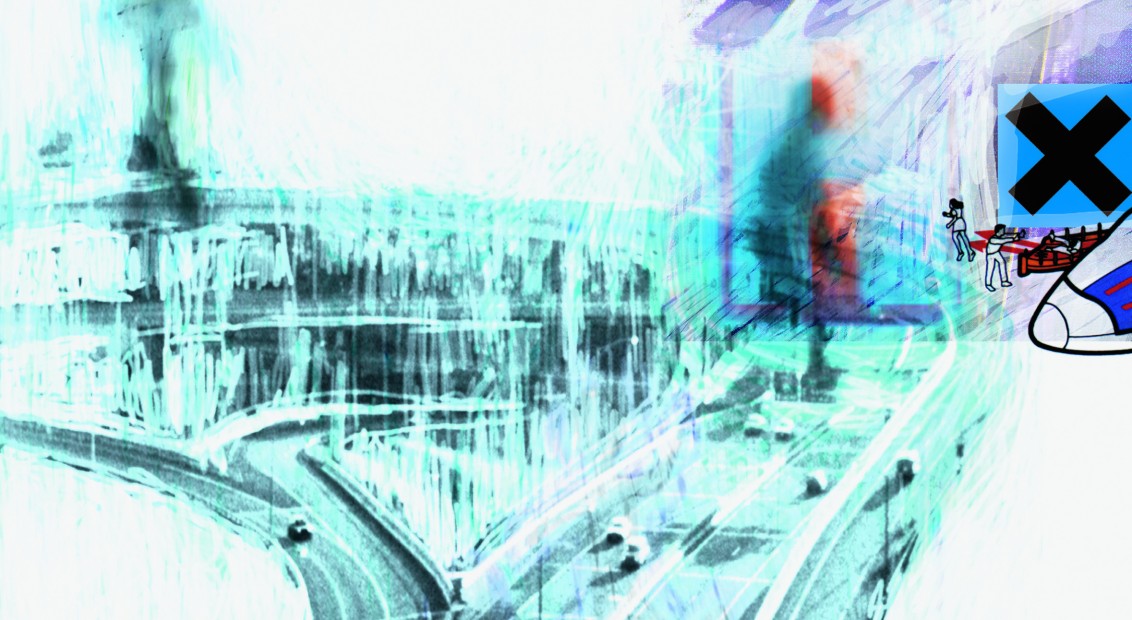 With recurring themes of demons, nightmares and the end of the world, Stanley Donwood’s art could be described as dark. This description however, would not do justice to the impressive scope of his work, derived from a career spanning more than two decades and involving any number of artistic mediums, from print and paint to etching, digital rendering and sculpture.

With the sheer breadth of Donwood’s career in mind, it is fitting that his new book, There Will Be No Quiet, is something of a retrospective, looking back over 23 years of creativity reproduced in generous full-colour images throughout. Donwood, who is probably best known for his work with Radiohead (he has designed all the band’s album covers since 1994), punctuates these pictures with an autobiographical narrative that covers his life as an artist. The result is a sprawling collection of anecdotes and insights that carry a wry wit and dark humour. 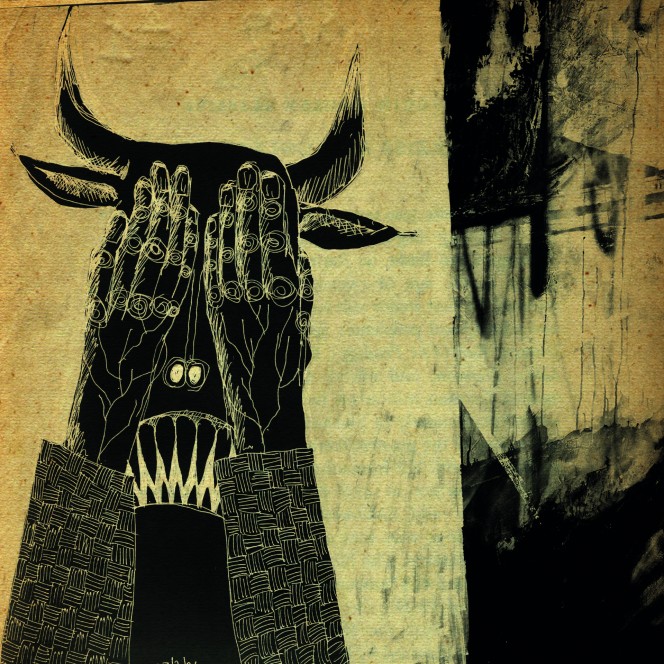 Henry Esterson: Hi Stanley, loved the book. It’s nearly 400 pages long – that must’ve taken a while to write. How did you find the process?
Stanley Donwood: Yes it is long. It was more than 60,000 words, I did 80,000 or 90,000 and I cut it down a lot – too many words! It took around a month and a half to write. I went somewhere that didn’t have Wi-Fi. It was in France so I didn’t understand anything and I didn’t know anyone, I had nothing else to do. All I could ask for was a pain au chocolat in the morning, a coffee, that sort of thing – I had the basics sorted out.

HE: The book mentions people like Alan Moore, Dr Dee and Ian Sinclair, and you address ideas that are quite esoteric, verging on overtly occult. Do you find these concepts to be particularly influential?
SD: Well, I’m not like a wizard or anything, not like Alan Moore, he’s really out there. Plus I can’t grow a beard so I’m out of the running, I guess. But it is interesting. I came across it almost by accident, mostly from reading about London. There are loads of occult or hidden histories of London. Peter Ackroyd has written about it quite widely.

There was another book I found called Prehistoric London, Its Mounds and Circles. It had been published by a druidical publishing house and they had this completely straight-faced account of the history of London that was completely different from the normal one, ideas about Brutus of Troy being the mythical founder of London… It was just like, whoa, a completely parallel version of history.

And the Dr Dee thing – now he really existed – and was employed by Elizabeth I as the court magician. Not a court jester, but the real deal, making political decisions. I guess he was the Dominic Cummings of his day. So I’m interested in these parallel takes on reality, I suppose. 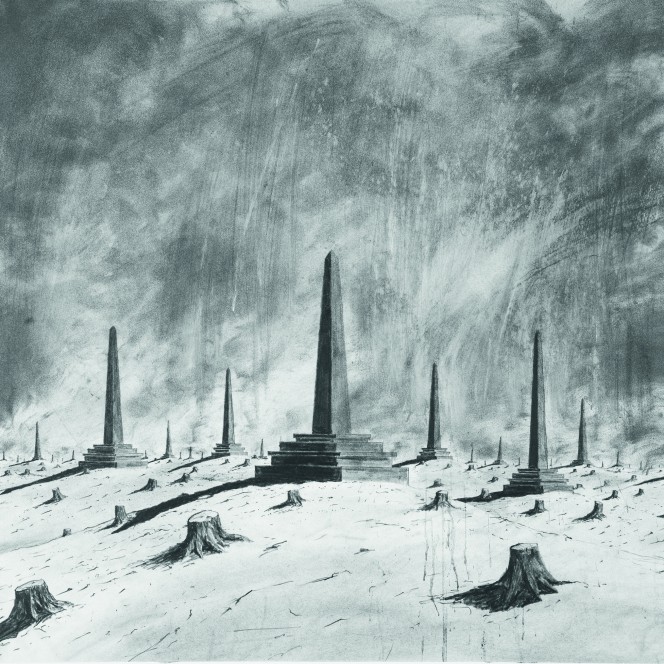 Artwork by Stanley Donwood / taken from 'There Will Be No Quiet'

HE: The book also mentions ley lines. When did you first become interested in them?
SD: Ley lines! Yes, ley lines are great. My friend and I used to try it at school, basically just sitting together in geography class not really listening to the teacher and looking for ley lines. You get an ordnance survey map and you line up old churches and monuments, it’s great… The first book on ley lines that I read was Alfred Watkins’ The Old Straight Track. His ideas about lines that connected these ancient sites were taken up in the late 60s by a guy called John Michell. He wrote a book called The Flying Saucer Vision, basically saying that ley lines were something like flight paths for UFOs. It’s pretty crazy stuff but I like to entertain these ideas. In places like Wiltshire where these things are very obvious – Avebury and Stonehenge – it’s really eerie.

HE: You often travelled with Radiohead to all sorts of strange locations when they were recording their albums. Do you think that particular places – much like Avebury and Stonehenge – can carry a psychological significance that influences your art?
SD: Yes, yes I do. But I don’t know how, like so many things it’s intangible. But there’s definitely something there. There seems to be a kind of difference in how energy is expressed.

Some of the places we [Radiohead] went were really very weird… There was a place in Gloucestershire, an old stately home. Only the ground floor was in any way habitable, so the higher you went up the more empty and derelict it became. There was this subterranean railway underneath the house because it was so big that whenever the servants were making the food they’d put it on this tray on the train tracks and send it to the other end. Halfway down the tracks we found this dusty old curtain, we went through it and there was this underground cinema down there… Really weird. Thom [Yorke] was really freaked out; he pitched his tent outside and said, “I’m not fucking sleeping in there.”

“[John Mitchell] wrote a book called The Flying Saucer Vision, basically saying that ley lines were something like flight paths for UFOs. It’s pretty crazy stuff but I like to entertain these ideas.”

HE: You were quite involved in digital art and website production during the early days of the internet. What is your stance on this area now?
SD: It was quite exciting at the time. It’s weird – there’s a part in the beginning of the book where I talk about the early internet – we really thought it was gonna be great. But it isn’t, it’s terrible.

HE: Do you see any silver lining to that? Any way that modern connectivity is helpful?
SD: I struggle to see ways that it has helped – has it made things better? I don’t think so. There was a time when it looked like it might do – say when people were using it in the Arab Spring to coordinate protests. But the leaders of those countries would say that’s analogous to people using Blackberry messaging to co-ordinate the London riots. It depends on your point of view, it’s just communication.

The resurgence of far-right politics, I would say, is almost totally down to the anonymity that the internet provides – it can be absolutely horrible. Now people are doing and saying things that they have been practising on anonymous web forums. I’m very depressed about it.

HE: Themes of war and apocalypse have often been prominent in your art. You mention in the book that the Iraq War directly influenced the artwork that you produced for Thom Yorke’s first solo album [The Eraser] Do you feel more worried now about these things? Almost like we are reaching some sort of tipping point?
SD: Yes, I think so. I thought I was depressed then but now… Years ago there was the threat of nuclear war, the stand of between the USSR and the USA. That was pretty scary when I was young. But there was a sense that the vast majority of people knew that this was a dumb thing, and was not a condition that could endure. 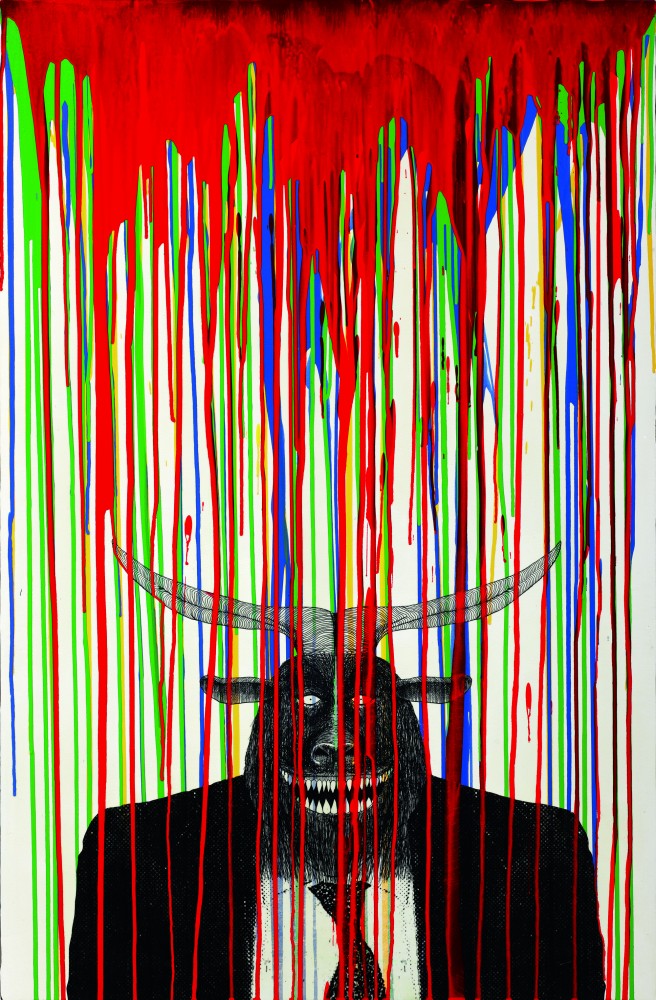 Artwork by Stanley Donwood / taken from 'There Will Be No Quiet'

HE: The threat of mutually assured destruction?
SD: Yes. But I’m more worried about nuclear weapons now than I was then. I mean India and Pakistan are in a nuclear standoff, they’re desperately trying to warn the UN that this is happening, and the coverage of this situation is very muted – you don’t see it on any headlines. We are so completely consumed by the fucking shit show in this country. So yeah, I am more worried.

And I can’t believe the resurgence of the far-right. It’s almost like the generation who survived WW2 has now left the building and no one remembers what happens. No one remembers how certain parties come to power.

HE: There’s one part of the book where you talk about the Digital Chaos conference in 1996, when you and some early internet enthusiasts got together to discuss the future of technology. If you had another conference today, what would you predict?
SD: Well, one thing that sums it up is a story I saw in the newspaper… it was an article about a Chinese fugitive who had been on the run for like a decade and he had disappeared, no one knew where he was. He was found completely off the grid, in the middle of nowhere, by autonomous drones that had detected him. They noticed anomalies in the landscape. He was living in a cave but he’d left some packaging or some shit out in the open. These unmanned, anonymous drones found him and he was arrested. So there will be nowhere to hide, that’s what I took from this; there will be no quiet, not for anyone.

The Will Be No Quiet is published by Thames & Hudson, and is available for purchase here.