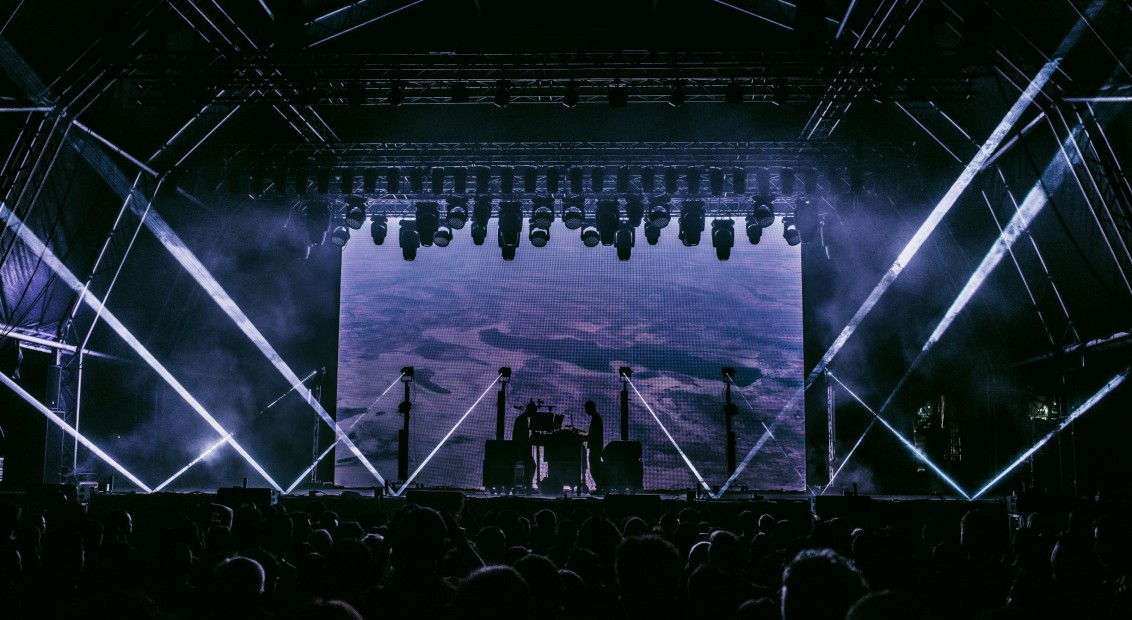 “[The internet] is all I really know,” confesses New York-based visual artist, Ezra Miller halfway through our conversation. A web developer, programmer and generative artist, his work is as much a reflection of the limitless ‘feed’ we interact with everyday as anything else. While traditional artists might work for months to produce a final static piece, Miller’s generative works are constantly changing ⁠— literally.

Working just with his laptop he composes abstract scenes, writing code to generate colours, shapes and textures that bleed and morph into each other, often combining them with collected images and videos that warp and distort indefinitely, in infinite permutations. Taking on a role more similar to that of a visual composer, he dictates the elements and source material to work with and defines the parameters for their interaction, but it’s the machine that generates the piece.

His latest Live AV experience is with music producer Objekt (AKA TJ Hertz), whose music slithers and distorts as restlessly as Miller’s visuals. The show sees him bring together disturbing renderings of giant 3D bugs with unnatural abstract scenes in a spectacle that reflect its hybrid process of creation. Demonstrating an uneasy tension between the artificial and the natural, Miller’s generative images are the visual language of our digital age. 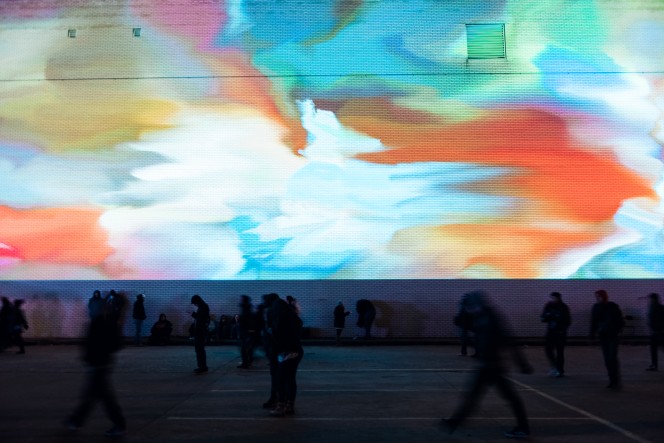 Alex Beausire: For those not familiar with your process, how would you describe how you go about your work as a generative artist?
Ezra Miller: I’d say the focus of my work is on making something that is able to be experienced in real-time with me controlling it. So I use things called shaders that run faster than normal in graphics programs so you can create really complicated visual effects, but in real-time, and then I use this in combination with other things like images and videos to create an experience.

The work for Objekt is a combination of different approaches, mostly making a bunch of content offline and then bringing it all back together in real-time with different effects we made that ties it together as a larger set.

AB: So how does the process for this work with Objekt differ to your normal process for work that’s not live AV?
EM: When I’ve done visuals in the past it was about building a system and then improvising live without necessarily any structure to it. The only visuals I’d done before this were with Yves Tumour and his set was this really intense noise but the performance was quite specific to the show. We used camera feeds so that was another live aspect of the set that was controlling what the output looked like

With TJ I wanted to switch it up because we wanted to have something that was really tightly synced visually so we use lots of TJs midi trigger to control certain effects. Also, the actual content was different in the sense that I was tasked with making more not necessarily abstract generative stuff, but more content that had figurative elements and narrative to it. I wrote out a large storyboard after listening to TJ’s recordings of the set and tried to think about how to make a visual that works for each song but also ties into a larger piece that flows with everything. 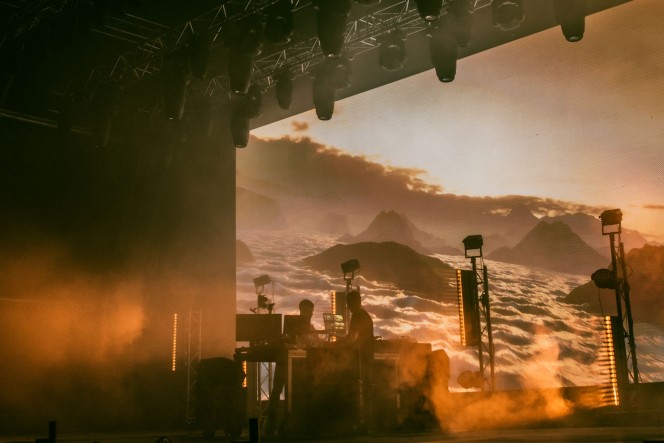 AB: Do you think the evolving, dynamic nature of your art makes it easier when taking on a project which is more interactive?
EM: Absolutely. When you build a system that is generative in that way, it has aspects to it that are procedural and not necessarily pre-planned. It’s about dictating the parameters that let something run, rather than controlling the outcome. It allows you to be improvisational and adapt to the audience and what they’re seeing and feeling, as well as how you reacting to something. I think the best moments in my work and the live work I do are when you get these accidental unexpected or surprising results from the systems, when you allow them to do their own thing and something beautiful happens. That’s where I think a lot of the beauty comes from.

AB: So you’re almost like a visual composer is some ways, more than a traditional artist?
EM: I don’t really identify with a traditional artist like a painter or sculptor because I’ve never been trained like that. The way that a painter might envision a painting being created down to the last detail of a composition and all that sort of stuff, isn’t really how my brain works. It’s more about creating something that could run infinitely. Making the parameters for a situation where you don’t know what the outcome will be.

AB: Is there a particular reason you think you’ve been drawn to working in a way that is more infinite?
EM: It’s kind of all I know really, it’s just what I started doing. I think maybe I’m drawn to it because of the time we live in. This constant stream of information being fed into everyone’s brains every day, which is all I know having grown up with the internet and this never-ending feed. So I think in some ways my brain responds better to that.

“I think the best moments in my work and the live work I do are when you get these accidental unexpected or surprising results from the systems, when you allow them to do their own thing and something beautiful happens.”

AB: So is your work an attempt to take that feed of information and turn it into something artistic?
EM: Yes, exactly. It’s more of an attempt to try to reflect on that. My personal work it’s always just a response to my life and what’s happening. I like to use a lot of personal images and photographs – capturing the colours of periods in my life and places I’ve been into something more meaningful by using them in a piece.

AB: It’s interesting that you mention using photographs in your work because it reminds me of Gerhard Richter who I know is a source of inspiration. How has he influenced your work?
EM: I think I have a tendency to look and see things where they don’t exist, in the same way you get with Richter’s work. He’s just someone I admire because of his approach and the balance between the photographic work he did and juxtaposing that with the crazy colourful and sometimes really neutral painterly stuff that I want to emulate. The other thing is just through working in the way that I do, I’ve found ways to achieve results to look like his without necessarily trying and that led me to explore that further. 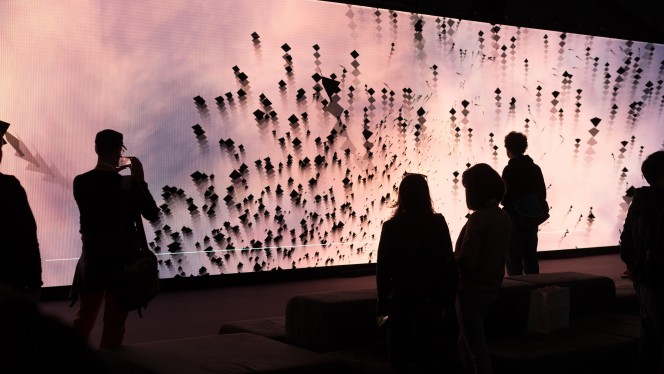 AB: And I guess while Richter’s work relies on a stroke of paint looking right you can run a program that can do that randomly, thousands of times, to achieve a perfectly random result.
EM: Yeah, I think we have some similarities in the way we both use generative approaches. I think he was doing generative stuff before it was really possible. There’s a really great series he did [4900 Colours] that was painting all these rectangular blotches of colour and making it look like random noise – this was in the 1970s or something. I think it was a response to the computer age coming about but he was definitely already doing this kind of stuff.

AB: Even in his earlier work where he has those portraits he’s assembled and then degraded, it’s very evocative of your style.
EM: Yeah. Also this idea of collecting images from other places and turning them into something else, it’s something you see with a lot of digital art and the internet in general.

AB: Do you think your relationship with technology affects how you respond to your own work?
EM: The way I respond is in some ways corrupted by social media and the way I know it will be presented. I’m always envisioning it from the point of view in the feed, so it changes the way I look at it.