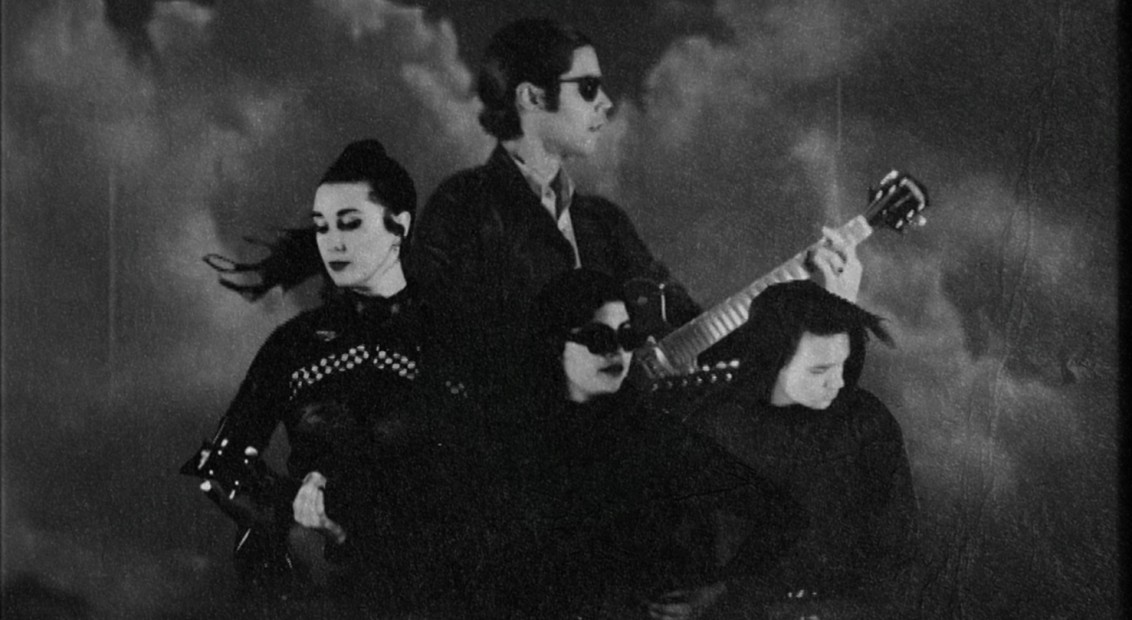 Stumble upon a Night Shades gig and you’ll leave converted. Formed by core members Shaun Blackwell and Clare McNamara in 2014, having moved to the UK from Wellington, New Zealand, the band have gradually built a devout following and genuinely thrilling catalogue of music.

Now a four-piece, with the addition of Niall Kavanagh [drums] and Stella Mathioudakis [bass], the group are honing in on their recorded sound, capturing the uninhibited intensity of their live act via their new 7″, Dead Nerves / The Desert. A thrashed-out slice of garage rock thrill – FFO The Gories, The Sonics, The Seeds – that’d slot right into a Pebbles compilation record, The Desert pulls us through Volcanic terrain and highway mirages, while Dead Nerves sees McNamara and Blackwell riff on the sense of isolation that comes from being a foreigner in London.

Exploring the inspirations and references behind the music, tune into an exclusive premiere of the new Night Shades 7″ below as the band talk us through the tracks.

On the story behind The Desert:
“It’s a song about existence, escape and the tension between opposing forces in the universe. Being from Aotearoa, NZ, my image of the desert is the ashy foot of a volcano and I’m interested in the bogan potential for drama in this aesthetic environment.” – Clare McNamara

What’s changed since your last release?
“Since we spoke to you last we’ve been working away on new music, making this 7”, doing our first tours of Spain and Italy and playing a few shows in-between. We got a new bass player at the end of last year and it’s been cool incorporating her. We’re touring Spain again in a few weeks and once we’re back we’re beginning work on some new recordings.” – Shaun Blackwell

On the production:
“Our aim with this 7” was to record a trashy five-minute punk record which captures the energy of our live performances. For this we recorded live; all of us together in a small room. We set a limit of three takes per song to keep everything fresh, and we stuck pretty firmly to that. When it came time for mixing, I opted for bringing out the overall energy of the songs over a perfectly balanced and overly-polished mix. I had Raw Power in mind as a reference album to mix by, so my approach was quite different to what it has been in the past (for example, I was much more extreme with boosts and EQing than I normally would be). Finally, we got it mastered through fully analogue gear – including tape – which helped preserve the life in the mixes even more.” – Shaun Blackwell

On the video for The Desert:
“I really just wanted to make a good old fashioned music video… You know, where bands are playing their instruments but they’re not plugged into amps. We filmed it on a small green screen at home. I didn’t really have a plan after that, but I know what I like, so I made it quite intuitively. I was thinking about it as a moving collage or a haunted postcard. I like the texture, the varying non-conformity of black & white tones and the grit.” – Clare McNamara

On the influences behind the new material:
“The desert road, burnt rubber, the engineering prowess of spiders, Ghost Riders in the Sky, volcanic ash, gravel and tar.” – Clare McNamara

“The Trashwomen, The Gories, Link Wray, King Loser, Richard Hell and The Stooges were all big musical influences for me while writing and recording the music for Dead Nerves and The Desert. The lyrics for Dead Nerves came as a result of an ongoing and often overwhelming feeling of isolation as both a Maori and a foreigner in London, and books like A Scanner Darkly and The Master & Margarita helped to inform the mood of the music and the recordings as well.” – Shaun Blackwell