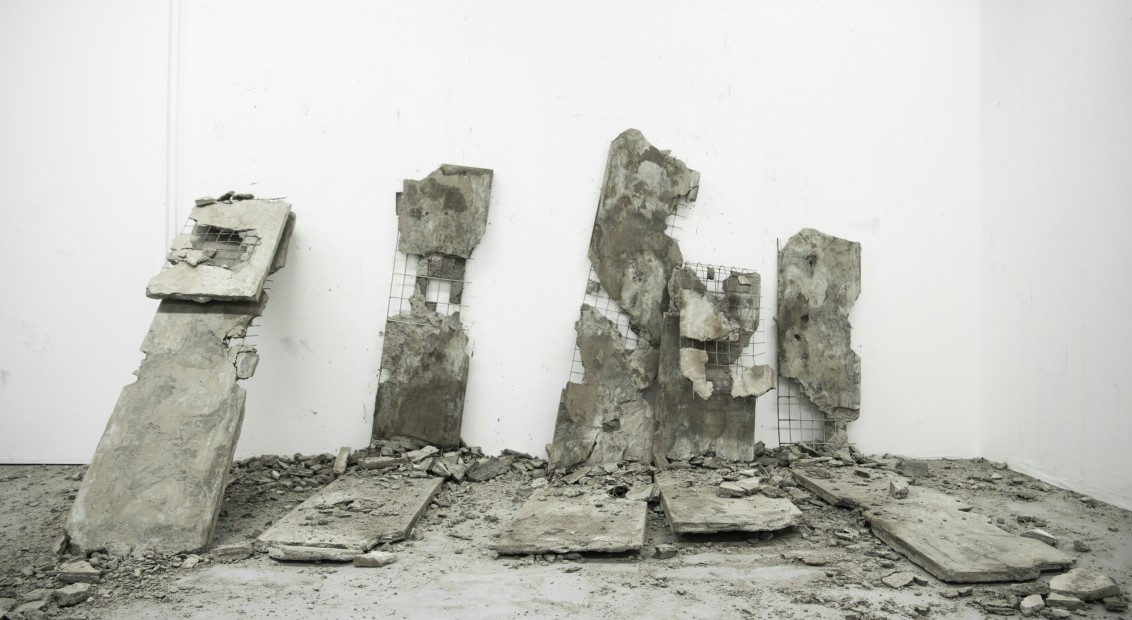 For his latest project, artist Joseph Clarke is exploring the dichotomies he perceives all around us with a new film (exclusive to HERO) and accompanying stills. Strength vs fragility, construction vs destruction, chaos vs order, these are just some of the “inherent tensions” that Clarke visualises with a demonstrative performance piece that spotlights human/material engagement.

Clarke, whose practice often revolves around architectural themes, processes and materials, here demonstrates how our relationships with materiality are rarely as straightforward as they seem. As he unleashes the “resilient fury of activated human form” against industrial slabs of concrete and rebar, we are forced to question the wider implications for seemingly stable and impenetrable social systems we never thought we had the strength to overcome. Under this new paradigm, what initially appears as a violent moment of destructive is rage is reversed as a cathartic moment of creation.

Finn Blythe: This project was undertaken as a means of exploring the connection between human conditioning and materials. What did you discover during the process?
Joseph Clarke: I wanted to platform the idea that there is a perpetual tension within the human body; an oscillation between strength and fragility. The conceptual project demonstrates practically, violently, how this might be visualised in relation to materiality. I am specifically interested in physically isolating, processing and re-manifesting in space the relationship we have with structures – both object and human – that we engage with or frequently encounter within the context of our inhabited urban landscapes. Logistically and physically the project demanded strength and endurance. The juxtaposition of industrial materials against the resilient fury of activated human form forced me to consider how stability can often be an illusion. The deconstruction of the materials here reinforces that notion.

FB: There’s an implicit violence to the work, was this consciously intended?
JC: The sculptural element of the work tied in with the material itself intentionally sought to acknowledge that we are all subject to certain imposed social infrastructures, and that to relieve ourselves from the accumulated emotional and psychological impact of this can be an urgent and aggressive act. Naturally, in order to break down the material used within the work, the application of a level of force and energy was necessary to gain the result I wanted.

FB: What made you want to work with film this time?
JC: Film as a medium was not the specified outcome of the project, intended instead to serve as a means of sustained documentation. We resisted imposing any heavy editing or post-production in order to produce as much of a documentary artefact as possible. The sculptural installation could exist independently, although working simultaneously with film enabled me to exhibit the deconstructive and performative process that I feel is key to its conceptual motivation. 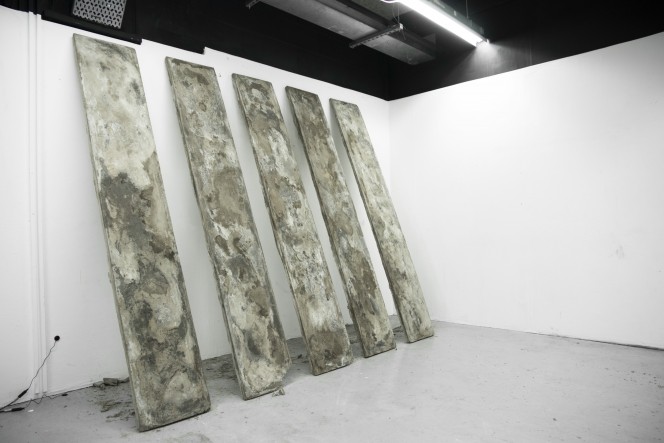 FB: How did you want the film to look?
JC: I worked closely with filmmaker Umut Gunduz. We discussed the limitations of video with regards to documenting performance. This was especially pertinent for a project where energy, presence and sound bring the immediacy (and violence) of impact to an uncomfortable and productive perspective of confrontation with a viewer. Gunduz’s focus on sound design was integral to the work and enabled the energy of live experience to be reintroduced within the context of moving image through a two-dimensional frame. We used contact microphones to capture and enhance the impact and visceral strain on the body. We deliberated over certain body movements and how this would affect the viewer’s experience. Working collaboratively with Umut was a great experience as I was exposed to new ways of thinking about how film making and video documentation serve and contribute to performative art practice.

FB: Many of your works are rooted in architecture, particularly the industrial and utilitarian. Do your works refer specifically to issues of urbanism and London or is there a more pervasive approach?
JC: The work is contingent upon my surroundings but not limited to one place or narrative. I am continuously referencing the landscape, history and environment around me, all objects and places are imbued with a sense of memory. Through observation, reflection, manipulation and re-contextualisation I aim visually to translate and present ideas which may urge others to reconsider their own sense of place.

FB: Are you influenced by the likes of Cornelia Parker and Michael Landy – both artists for whom destruction is centrally important. (if not, are there any contemporary artists whose practice resonates with your own?)
JC: Deconstruction as a process is also a means to construct; a means to create and communicate. For instance, at various intervals throughout this performance the installation could be seen as complete or finalised. For me the work is at it’s strongest once the distressing has concluded, after the interaction between the body and the object has taken place. Conceptually, deconstruction offers unique implications within the context of different artists and their practices. Over the last few months, I have referenced the work of Richard Serra, Sterlac, Joseph Beuys, Marina Abramovic and Erwin Wurm.