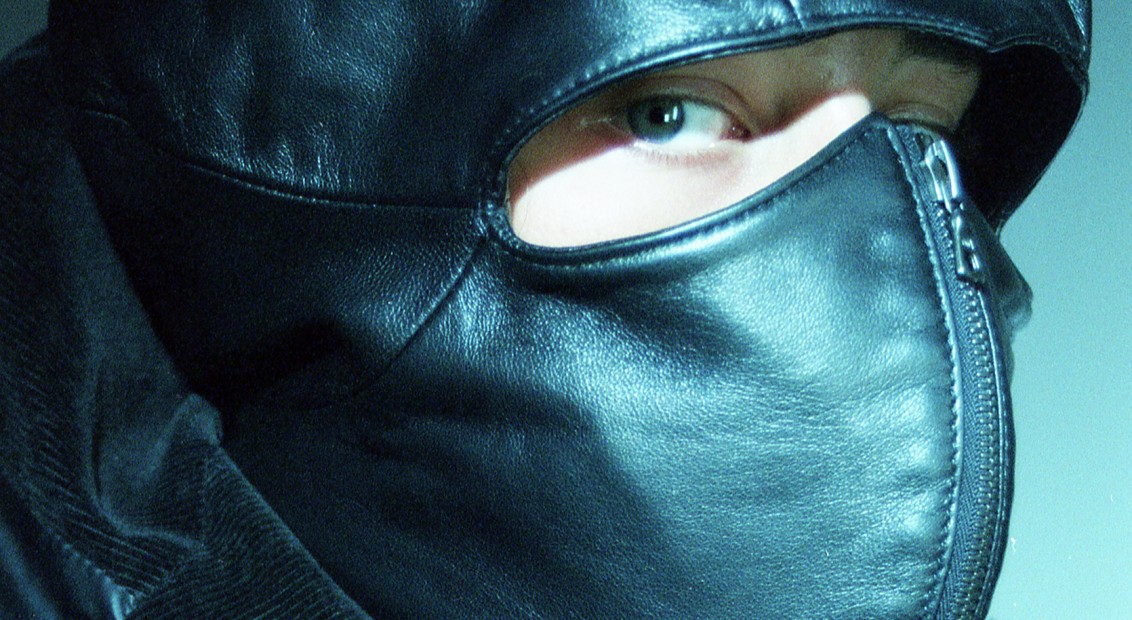 Vexed Generation: The returning cult nineties label that protects you from state surveillance and police brutality

Born in 1994 by London-based design duo Adam Thorpe and Joe Hunter, Vexed Generation was conceived as a means of active political resistance, an outcry against the failings of government and a rallying call to find new creative solutions. Amid the growing socio-poilitical dissent of the 1990s, partially invoked by widespread distrust of state power in the face of increasingly extensive surveillance, the 1994 Criminal Justice Act (CJA), a widening gulf in social inequality and London’s deteriorating air quality, Vexed grew out of a necessity to act and a desire to protect.

Now, almost twenty-five years after they first launched, vintage fashion retailers Byronesque are teaming up with Farfetch to bring back a Vexed capsule collection of eleven replica pieces. These garments, which appear like uniforms of some urban militia – discrete hoods, built-in respiratory face masks, all produced in black leather and blast-proof ballistic nylon – reflected the concerns and debates at the forefront of social discourse throughout the nineties.

Today however, those same concerns that originally informed the utility inherent to each garment; unregulated CCTV, noxious fumes and the right to anonymity, are as pressing as they were nearly three decades ago. Below, Thorpe and Hunter, whose cult nineties status extends across fashion, music and club culture, talk about the conditions that shaped the label, the value of anonymity and why we need Vexed now. 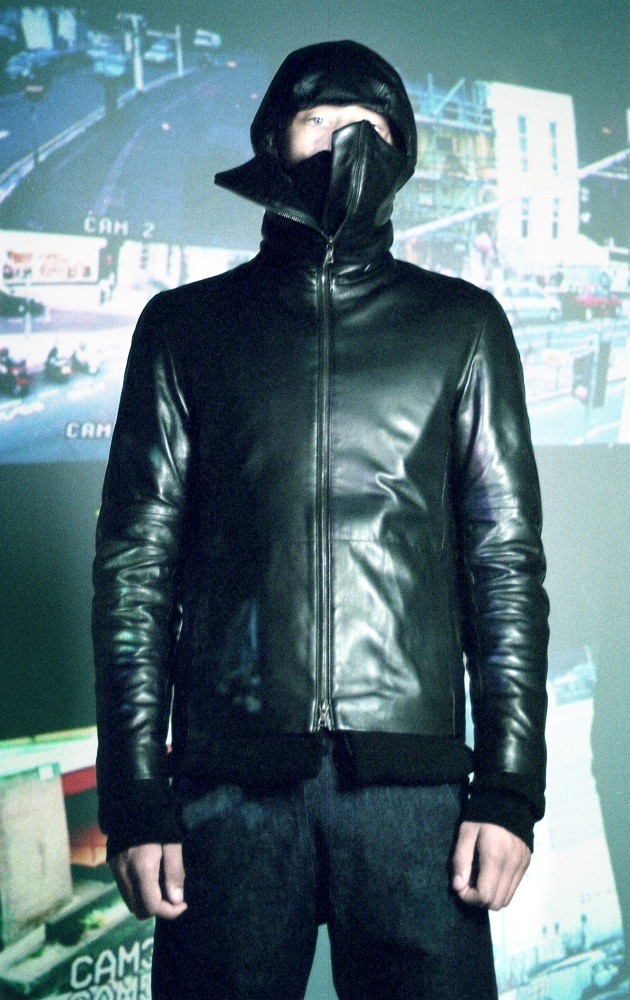 Finn Blythe: Vexed Generation was born as a means of resistance to a nefarious state and a city of crime, surveillance and pollution. How much do you feel has changed from that period in the 90s and why do you think it was important for the brand to come back now?
Vexed Generation: We set out to make a London streetwear – the design of which said something about the London street environment. London was and is a wonderful city, a place of diversity and opportunity. But that opportunity is less well distributed than the cameras and pollution – contributing to crime. Since the 90s, individualism and competition have become ever more pronounced and the gap between rich and poor extended. House prices and precarious employment have risen, driving increases in homelessness and hopelessness. Ultimately it’s about whether you see the city (and the world) as a competitive place or a collaborative place.

“Ultimately it’s about whether you see the city (and the world) as a competitive place or a collaborative place.”

Competition inevitably has winners and losers – as access to opportunity and resources have been hoarded – so competition has increased, leading to a kind of carcinogenic competition that drives mistrust of each other and acts as a barrier to the collaboration necessary to resolve the challenges we face together – which can be seen in the response of some to migration – climate change, war, economic opportunity, all motivating people to find a better life in our cities and neighbourhoods. For many of us diversity represents opportunity, for others, these new arrivals are experienced as new competitors rather than new collaborators – and diversity is perceived as a threat.

The CCTV, CJA and air quality issues we were responding to in the 90s were both predictors and contributors to the challenges we face in our cities today. Air quality is intrinsically linked to the use of fossil fuels that we must divest from to halt climate change, whilst the laws introduced by the CJA and CCTV (now augmented with AI and facial recognition) introduced to police have been, and will continue to be, used to limit civil dissent and disobedience at a time when it is more important than ever that people are able to enjoy and protect publicness and public space as a space for dissent, dialogue and debate. Vexed has always been about using design to assemble people around issues of concern – to raise awareness and start conversations or contribute to debate – and to provide protection and utility in response to these concerns. Now the need for public assembly and debate is greater than ever and Vexed is ready to contribute.

FB: Were there any watershed moments for you that prompted the label or was it more a growing wave of discontent towards urban conditions and what you considered draconian state policy?
VG: Both. We have always been interested in clothes. We wanted to design a London streetwear that reflected our experiences and concerns of Living in Tower Hamlets in the early 90s. We experienced some of the worst air quality in London. One in five children had asthma and on a warm day in June 1994, there were 300 admissions to Whitechapel hospital in 24 hours with people experiencing respiratory problems – mostly elderly people and young children. The area also saw the early introduction of CCTV around the ‘ring of steel’ surrounding the City of London and its proliferation into the streets beyond.

“1 in 5 children had asthma and on a warm day in June 1994 there were 300 admissions to Whitechapel hospital in 24 hours – people experiencing respiratory problems – mostly elderly people and young children.”

The Tory government at the time used public funds to match fund the installation of private CCTV – with no legislation governing its use. Whilst we were researching and designing the early Vexed pieces someone very close to us was arrested at an early Reclaim the Streets demonstration in Camden. They intervened to try and stop the rough treatment and wrongful arrest of a demonstrator and were arrested and charged with affray. In the six months leading up to their court case they were supported by the Legal Defence Monitoring Group – independent monitors who observe and document the actions of demonstrators and the police to ensure the correct evidence is presented to the jury when considering public order offence charges brought by the CPS (Crown Prosecution Service) – it was common for police to corroborate each other’s statements while protestors had no such back up without the legal observers. The court found the arrest to be wrongful and our friend had no case to answer.

This experience showed us how the law could be abused by the police and brought us closer to others who had similar experiences when arrested at demonstrations, camps and parties. We understood the CJA to be a direct attack on alternative lifestyles that the conservative state saw as threatening to their control. This politics of fear was something that we wanted to discuss through our designs – to make visible concerns over invisible threats to citizens and civil liberties; hidden cameras, poisonous air and draconian laws.

FB: Your designs look quite threatening, especially those with face masks, and with stab-proof materials there’s an implicit suggestion of violence. Obviously, anonymity represents individual liberty in one sense but also unaccountability on the other. Did you find it difficult to strike a balance?
VG: The designs were proleptic. They created an aesthetic that responded to a world that we experienced in the present but wanted to avoid in the future – by warning against it. Recently in an interview, Margaret Atwood talked about the dystopian vision of the future presented in The Handmaid’s Tale, she said that she doesn’t predict the future so much as she sees the present-day warning signs and what they could mean for society if left unchecked. She said, “You generally look ahead of yourself to see where you are going and that’s what those kind of books are like. They’re like blueprints of the possible futures that help us to decide whether that is where we want to go.”

This describes our approach to these designs. Almost 25 years ago we always said that these designs were not futuristic but contemporary – sartorialising the future that was there in the present. In this way, the designs both provided utility to protect the wearer in the present whilst also acting as speculations on what streetwear might become in the future if current concerns were left unchecked. 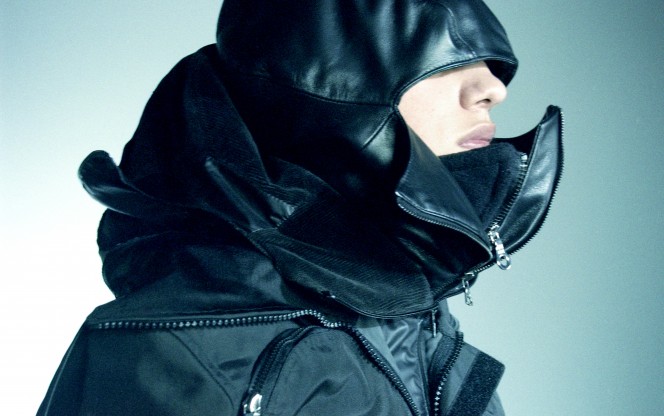 We created it to make visible concerns that were less visible – the designs were not the cause of the environment they were made to expose – including a lack of trust between state and citizen. We were (and still are) interested in the power of anonymity. For us anonymity is not a threat, you don’t need to know about me as I mean you no harm. That’s the assumption at the heart of this, that most people do not wish to harm each other and strangers are an opportunity, not a threat.

A preference for privacy or anonymity is not a threat unless it is received as one. The old adage of CCTV advocates in the 90s was, “If you have nothing to hide you have nothing to fear” – scarily, this phrase has been attributed to Nazi Minister of Public Enlightenment and Propaganda, Joseph Goebbels. Conversely, we could argue: “If we have nothing to fear from the anonymous then why do we need to know their identity?”

“The Vexed parka was both a parody of police riot gear and designed to protect the wearer. When police attend a peaceful demonstration or party dressed for battle then who is suggesting violence?”

As for violence, some of the garments are definitely about protection, which does connote violence – and demonstrations were violent places if you chose to stand your ground when the police decided that you needed to disperse.

The Vexed parka was both a parody of police riot gear and designed to protect the wearer. When police attend a peaceful demonstration or party dressed for battle, then who is suggesting violence? In his book Art and Agency, Alfred Gell talks about how Polynesian masks that appear scary to people are actually expressions of scared people. There’s something interesting in these mirrorings and how we read and respond to them.

FB: Is there a danger in commodifying a certain anarchic attitude that the progressive political and social dialogue surrounding state power is obscured?
VG: Yes, co-option and commodification is a threat to progressive dialogue. We don’t feel that is what is happening here. The garments give us the opportunity to join in a discussion around civil liberties and social justice. The re-issue of these garments for sale creates exposure for the garments and the issues that inspired them. Not to obscure the dialogue but to extend it. Your questioning has made a space for this dialogue. Thank you.

The Vexed Generation capsule collection can be purchased online here.