While Freddie Mercury’s personal life was often the focus of public interest and scrutiny – he was forthright about being gay, and was one of the first major entertainers to die of AIDS, during the 1990s – it’s Mercury’s relationship with Mary Austin that is perhaps the most intriguing and yet side-lined. However, in Bryan Singer’s long-awaited new biopic, Bohemian Rhapsody, Mercury and Austin’s relationship is brought to the fore via the performances of Remi Malek and Lucy Boynton.

“Modern” is how Boynton describes the pair’s relationship to us in the interview below. Meeting as Queen were just starting out, Mercury and Austin became romantically involved before they eventually split over Freddie’s relationships with young men – leading to a turbulent break-up explosively portrayed in the film. Yet Austin remained his closest and, according to Freddie at one point, his only friend, until his premature death at the age of 45 from AIDs-related illnesses.

Still residing in Freddie’s lavish home in Kensington, West London with her family, the real-life Mary may prefer to stay out of the spotlight, however, thanks to Bohemian Rhapsody and Boynton’s portrayal, her story is finally getting its deserved telling.

Hannah Holway: A lot has been covered in the press about Freddie’s sexuality and his relationship with other men, but I didn’t know anything at all about your character, Mary Austin. How much knowledge did you have of Mary and her relationship with Freddie when you were approached for the role?
Lucy Boynton: Kind of nothing at all. I knew very little about Freddie anyway, other than him as a performer, so it was my first proper introduction to him, through this script. It was a really beautiful avenue of access, having that first introduction be such an intimate look at him – as the slightly more vulnerable person behind the performer. And Mary is at the very heart of that. They are the stillness at the centre of an otherwise very frenzied, dynamic world.

HH: How did your preparation for the role differ to your normal route, considering the pressures of historical accuracy and doing the character justice? Did you meet Mary?
LB: I didn’t actually get to meet Mary, which added a very daunting aspect to the role, because you want to be as honest as you can while being respectful of the boundaries that person has set. It also means that especially in the scenes where it’s just Mary and Freddie, I was very conscious, as I hope the audience are as well, that it is absolutely a creative interpretation. We aren’t claiming to know word for word what happened in those intimate moments. And thankfully Brian was there…

“They are the stillness at the centre of an otherwise very frenzied, dynamic world.”

HH: Yeah, I heard Brian May and Roger Taylor were pretty involved in the process?
LB: Yeah, Brian was actually the person who introduced Freddie and Mary. So it was nice to hear the point of view of someone who knew them as individuals and could see so clearly the impact they had on one another.

HH: Definitely. [Freddie and Mary] have a very special friendship and relationship in the film, which is also quite unique…
LB: And modern. They were so pragmatic about it. And not to be reductive, because [their breakup] was obviously very turbulent and difficult to come to terms with for Mary, but I guess because they had such a solid foundation of love and respect and history, it enabled them to be as pragmatic and understanding as they were. But still, it takes incredible strength on Mary’s part to take that all on board.

HH: Of course. Did you and Rami [Malek] click straight away? To be working together so closely, the chemistry must have been important.
LB: Yeah, and it’s weird because I feel like I got kind of introduced to Freddie initially.

HH: Well, Rami is completely transformed in his role as Freddie.
LB: Yeah, he completely disappears. And at the end of the day when he scrubs off his makeup and such…

HH: And removes the prosthetic teeth..
LB: [laughs] Yeah it was a completely unfamiliar person. So it was like getting to know two different people at once.

HH: So I’m guessing Rami is very different from Freddie?
LB: Very different. They couldn’t be further apart. And that’s part of the shocking thing when you see this performance, to see the absolute transformation and disappearance of Rami.

HH: And now that I’ve seen it I can’t imagine anyone else playing Freddie Mercury.
LB: Exactly, and that was apparent from the beginning – the producers always talk about seeing [Rami’s] audition tape and thinking, well that’s Freddie. It just clicked. Once you see Rami’s version, you can’t imagine who else could’ve done it. 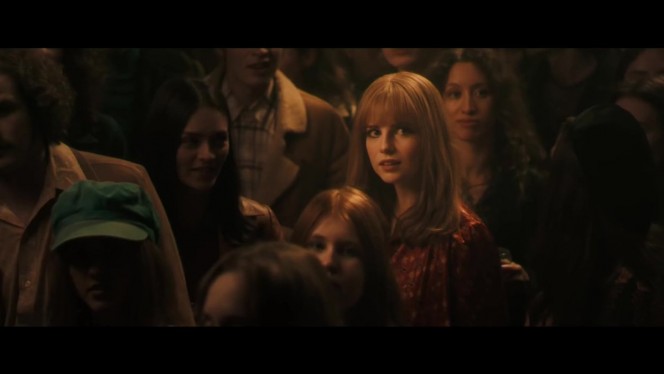 HH: The key scene that stuck out to me in the film was the Live Aid performance, where Mary is stood backstage, and she was also present at many of the recording sessions. Was it really exciting to film those scenes, considering how iconic they were?
LB: Yeah, I think with the more dialogue-based and intimate scenes, it did feel more similar to other filming experiences, where you are playing fictitious characters. Whereas when you hear the music you’re suddenly aware that you have some involvement in something as pivotal as Queen… Those were the slightly weirder, out-of-body-experience moments. And especially Live Aid, knowing how memorable and iconic that performance was. To see that recreated moment for moment… that was also my very first day on set as well.

HH: Oh wow. I actually watched the real Live Aid performance last night, and in the film Rami literally gets every single movement and intonation on point.
LB: Well, Polly Bennett, our movement coach, is absolutely brilliant. They were counting the beats for every glance. They’d nod at each other. Every single movement on that stage was repeated for this film. It’s insane to watch and it’s also nice to be the person relieved of the pressure, stood at the side appreciating it all [laughs].

HH: Totally. But did you know when you were filming, what a big deal this would be? As the first on-screen, big-budget recreation of Freddie and his life?
LB: Yeah, at times it was pretty overwhelming. Especially with the literal character of Freddie, because we’re so aware of his public persona you kind of feel safe telling that side, whereas with the more intimate side of Freddie, that’s more difficult. I think the scriptwriters and producers struck a really solid balance between a completely honest telling, but not an expose or anything.

HH: It definitely didn’t strike me as intrusive.
LB: Well, people keep questioning how much of the ‘darkness’ of Freddie Mercury we explore. And of course you try to show an insight into who he was off-stage, but he never spoke about all of that. So it’s not our job to expose someone like that.

HH: Yeah, and it’s different when the person you’re recreating is no longer around. You have to be very respectful.
LB: Exactly.

HH: I also read that Freddie had a second-hand clothes stall in Kensington Market at one point – the 70s clothes that you and Rami got to wear were beautiful.
LB: It was total heaven. Especially the set of Biba [the iconic clothing store that Mary worked at when her and Freddie met]. I mean, my mum remembers that being the place. To be transported into that was amazing, to be as close as you can be to that experience.

HH: Did you get to keep any of it?
LB: I’m still trying to pursue that [laughs]. That purple jacket I wear in my first scene, unfortunately that’s vintage so I can’t take that. 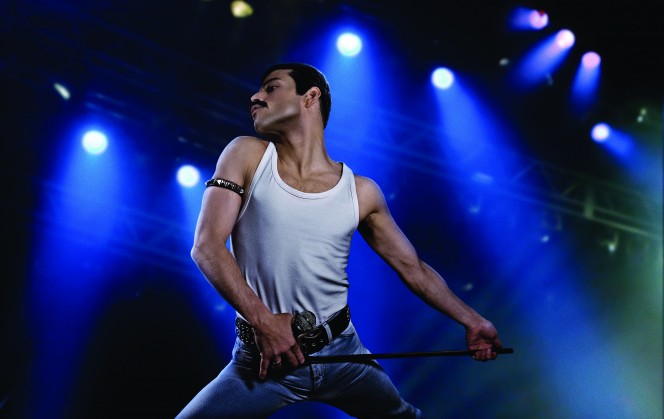 HH: There’s a scene where Freddie comes to Biba to see Mary and she puts eyeliner on him. She was obviously always comfortable with the androgynous, flamboyant nature of Freddie. Their relationship transcended labels in so many ways.
LB: Exactly that. I think Freddie and Mary’s situation is the mindset that people are trying to adopt now, back then it was so foreign. We’ve heard so many people try to define their sexuality and their relationship, to make sense of it in terms of such a traditional structure of what a relationship should be. But like you say, it wasn’t really an element of focus for Freddie and Mary.

HH: It seemed as if, more than anything, they just had such a strong friendship, despite being romantically involved for so long.
LB: Yeah, they had such a strong foundation of love and respect for each other. And with that, there was this willing of the other person to be the most honest and happy version of themselves. It’s nice to be reminded that you don’t have to define yourself in terms of the conventional structures that we’re used to.

HH: And Freddie was one of the first big names to say that…
LB: Yeah, I mean the fact that he was doing that back in the 70s, and we’re all still trying to wake up to that now… it’s very topical.

Bohemian Rhapsody is out in cinemas now.