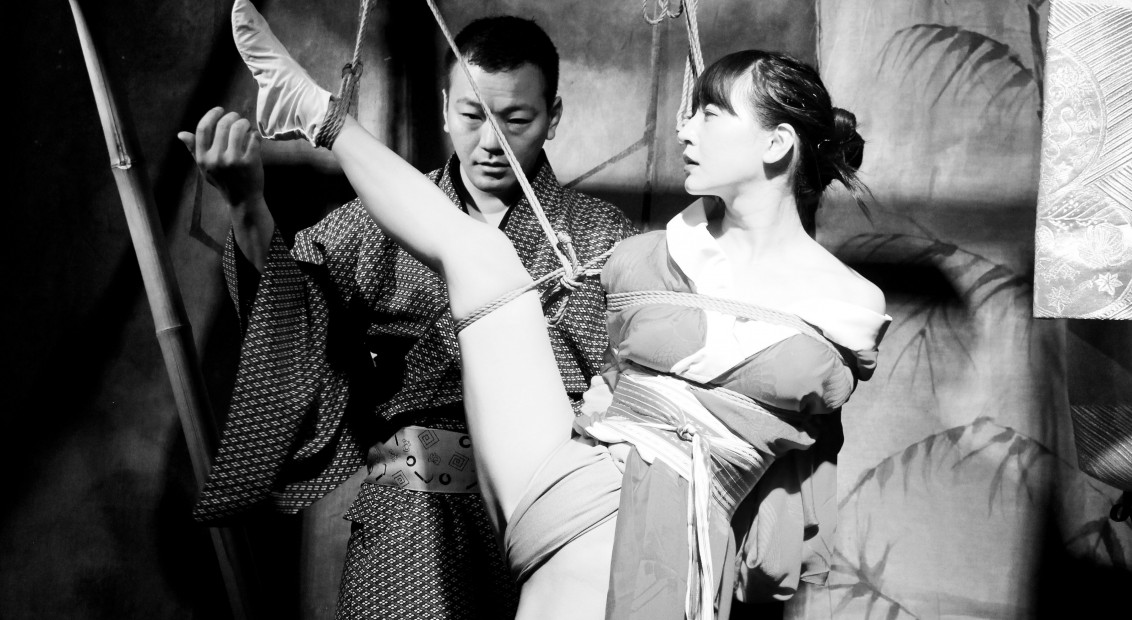 Show me the ropes

Unpicking the subtleties of kinbaku, the ancient Japanese art of bondage tying

Show me the ropes

Last month at the Museum of Sex’s Night Fever Disco lounge, Kinoko, alongside performer and model, Aimi, brought their craft to NYC. Transforming the Manhatten venue through a unique and intricate Kinbaku performance series as Kinoko looked to transform society’s opinion on an ancient art form otherwise seen as dark and obscene. 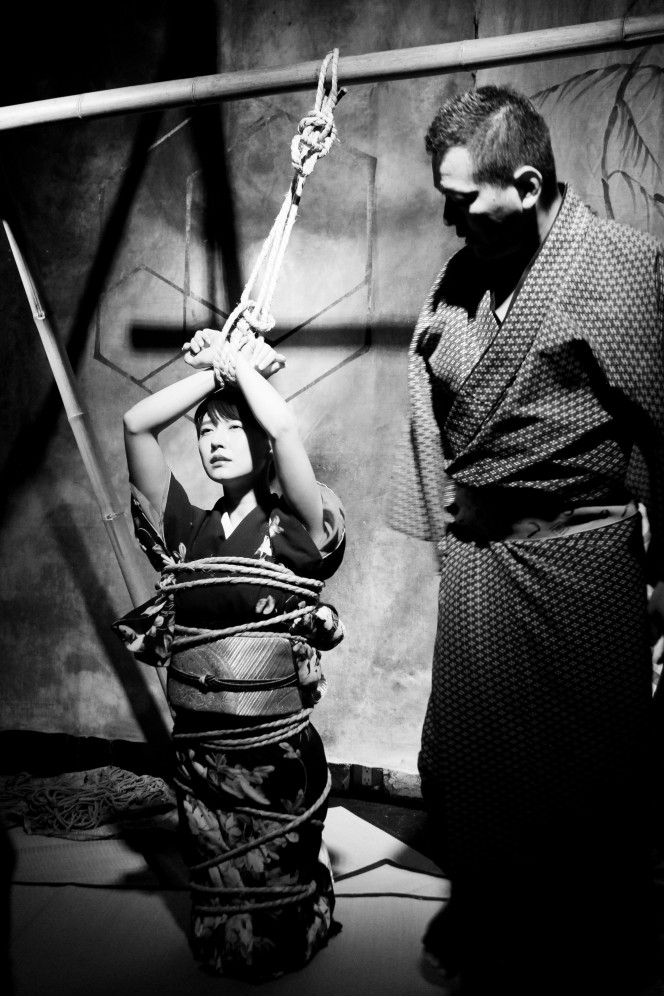 The performance itself was a study of communication through the physical and emotional: as the lights dimmed and a hush rippled through the crowd, the sound of drums surged like the tide as it grows from low to high. Kinoko seemingly appeared out of the shadows, dressed in a traditional, Japanese kimono, holding Aimi’s hand. Her slippers, or geta in Japanese, are removed as she and Kinoko come to stand in front of the wooden beams from which she would dangle. Her blue, floral kimono peels away to reveal a vibrant red replacement, the colour of strength, passion and self-sacrifice, in its place. Aimi’s pleasure and pain became a means of communication between her and Kinoko, proving that to surrender is not as much about letting go as it is about trust.

Here, we catch up with Kinoko and Aimi after their performance series came to a close to talk destiny, transformation of societal opinion and what it meant for them to be performing in New York City.

Lindsey: Can you both talk a little bit about your backgrounds? Where did you grow up and what does ‘home’ mean to you? How did you find the art of kinbaku?
Hajime Kinoko: I was born in a town named Shibatta, which means “tied” and grew up in a town named “Nawa” which means “rope,” in Japanese. Maybe it was my destiny to be into the world of Shibari.  My first encounter to Shibari as an art was twenty years ago when I pursued how to make women beautiful with Shibari, and people started to say my work was an art.
Aimi: I was born and grew up in a town which is urbanised, but I was still able to get in touch with nature. For me, “home” means the place or a person I feel comfortable staying with. My first encounter to Shibari as an art was seeing a picture of Hajime Kinoko performing that showed on my twitter.

Lindsey: The rope is unmistakably a symbol of power and historically, the practice was used to restrain prisoners. I’m wondering what “power” means to you?
HK: Shibari restricts movement of your opponent. I think it occurs as power to the person who ties, in the sense of control. In contrast, the model who is bound is controlled by him or her, so there is fear and an uneasiness. Yet, in understanding the model’s feelings and tying her with love and care, a stronger strength emerges, of trust. 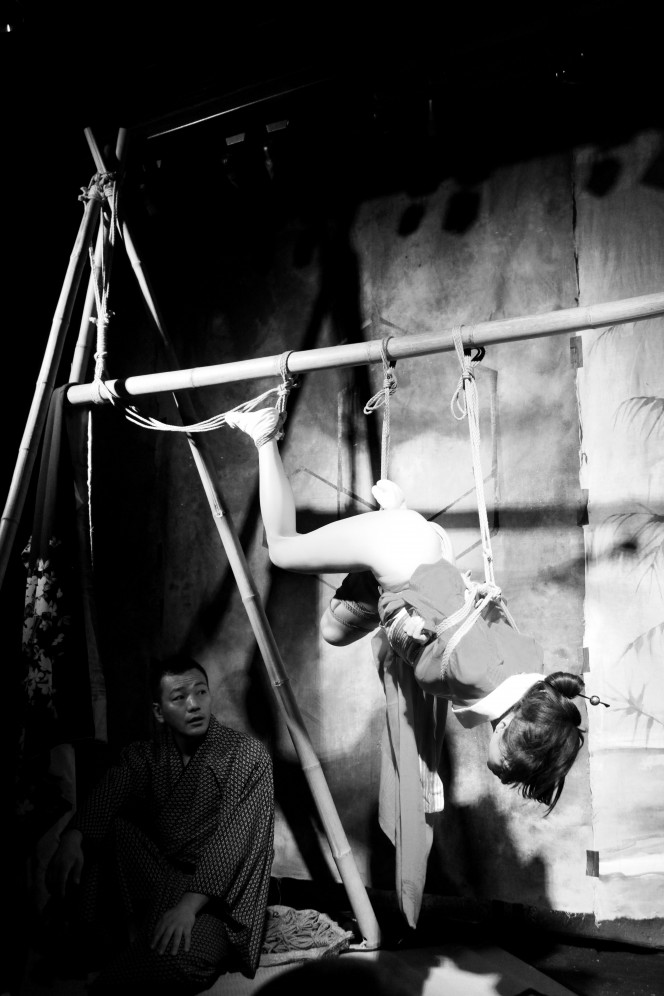 LO: It seems that Western culture has become infused with and fascinated by Asian cultures but doesn’t necessarily fully understand them yet, you mentioned in a previous interview that you wanted to spread this philosophy and transform opinion, what is the opinion of Asian culture/kinbaku that society currently has and what would you like to guide it towards being?
HK: People think Shibari is just an abnormal play in Japan and it’s discriminated against from Japanese media and in public places. However, Shibari is very beautiful and wonderful because people can learn to build a loving relationship through it. I want people to know about it. I believe strong beauty and morality is necessary when I let people know about the beauty of Shibari and I want to show that through my performance.

LO: You say it is a means of communication between two people, it seems that our current methods of communication have changed so drastically, what with the use of social media, texting and simply living in the digital era.
HK: I want to tell people about the connection that I have with a model while performing.  It makes no sense that I do not have an emotional connection with a model, and even the shape of Shibari is beautiful. Today, we live in a convenient world filled with the internet. People communicate in a virtual world, like on social media, and don’t communicate in a real world. We should take a moment to think about genuine ties and communication with others. I hope people remember the importance of human connection while they look at my work.

LO: In kinbaku, pleasure is said to be more so in the journey than in the destination – Aimi, do you think this is true? What have you felt or realised as result of this practice?
A: Yes, I think so too. However, the meaning and purpose of Kinbaku will change depending on the person who will tie and who will be tied. It also affects the impression on people who see Kinbaku performances because I think it draws out the personality of the person involved. Kinbaku is also a collaborative work and I think it will not be established as a work unless there is mutual trust.  Through this experience, I can express myself in and through the beautiful world of kinbaku created by Hajime Kinoko, who I respect. Moreover, I feel a pleasure to be a part of his work. 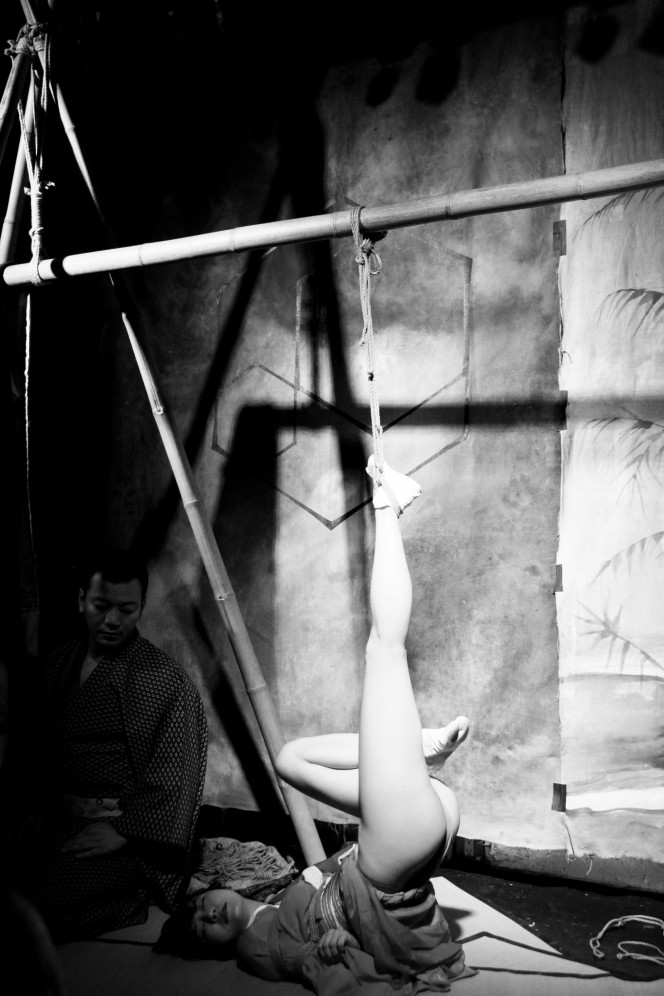 LO: How does Japanese culture view this art-form in relation to how the West views it?
HK: Western culture has an idea of eternal beauty, in contrast to the beauty of extinction which is inherent to Japanese aesthetic senses. Therefore I think people find beauty from Kinbaku because eventurally the rope must be untied, it will not stay forever.

LO: What does it mean to you to be performing in New York City?
HK: I believe New York is one of the most modern cities in the world.  It is very much an honour and challenge for me to perform here. I think American people are very honest with their feelings, they say good is good and bad is bad. I believe getting honest opinions from people in New York City will change the image for Kinbaku in Japan. I am very happy and appreciative to receive warm applause and positive messages from people in New York City.
A: This is a great opportunity and it may change the passive way of thinking held by traditional Japanese people. In Japan, there are only a few people who recognise the beauty of Kinbaku as an art. I am honoured that it was recognised by the Museum of Sex, making it possible for us to perform in New York City, it means a lot to me.

LO: To what extent is trust involved in between the rope master and the subject?
HK: I believe the rope master and the subject must have a deep trust between them. When the model is tied up, she can not move and there is a risk to getting injured. In that situation, I can not tie her without her trust. I feel an appreciation and responsibility at the same time, I want to make her beautiful in return for her trust.

LO: What has kinbaku taught you about yourself
HK: To cherish connections with people.