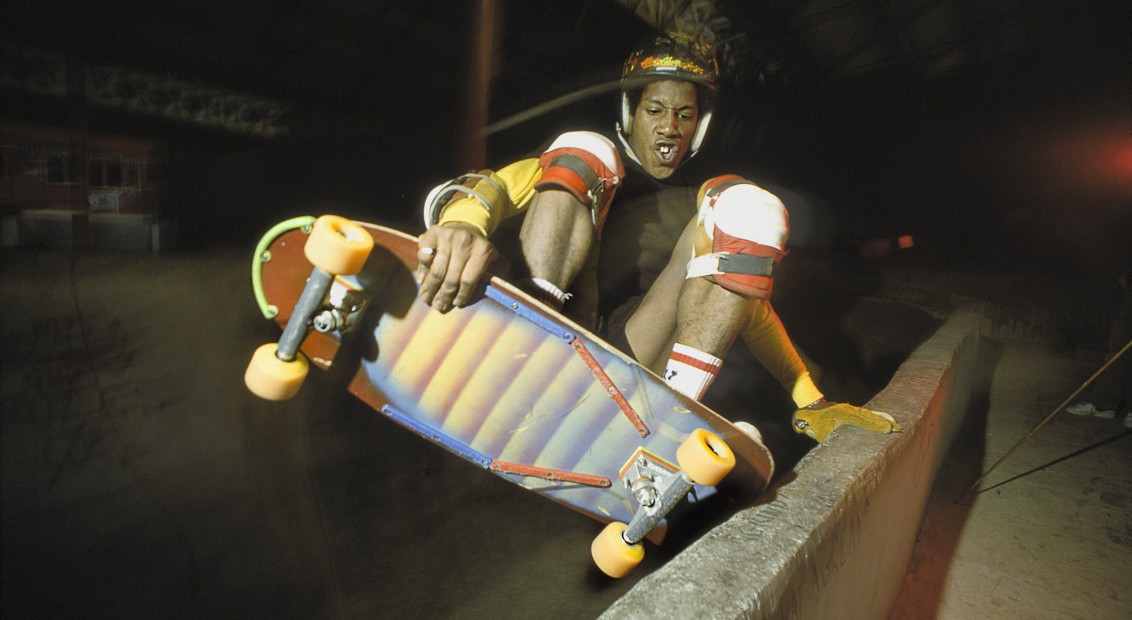 Read and Destroy: the seminal UK skate zine coming back to life

Born from the ashes of the UK’s fleeting skate scene in the 1970’s, Read and Destroy (R.a.D) was the seminal publication that spoke for a unique period in British youth culture. Over thirty years since it was first published, a new two-volume book, co-edited by Andy Holmes and Dan Adams, revisits the title through the written and visual archives of its core editorial members, including Spike Jonze, Skin Phillips and James Hudson.

Distinct from its American counterparts, R.a.D championed a new look in mainstream publishing under its founding editor Tim Leighton-Boyce, with an inclusive and experimental approach that celebrated both amateur and professional talents. The magazine soon became the central news source for a culture still very much underground, a binding agent connecting the localised pockets of skaters that characterised the scenes of the early 1980s.

Tracing the publication’s early roots as a pioneering collective of die hard skaters through the later golden years of stadium contests and street skating icons, the proposed book is an ethnography, chronicling the rise of skate culture in all its messy, spontaneous energy. There’s a catch though. The book’s completion still depends heavily on generous donations to the R.a.D Magazine archive project Kickstarter campaign. We spoke to Andy Holmes about why this is such a worthy cause. 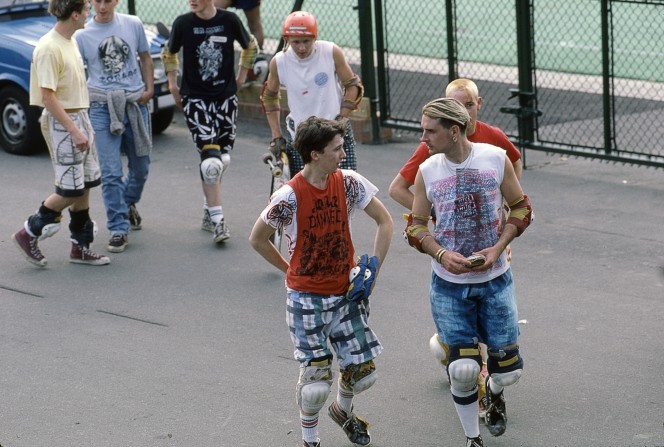 “There was an informal, hardcore, global network that linked up to keep skateboarding alive – different communities, in different countries, connecting”

Finn Blythe: Why was R.a.D so vital in cultivating a fledgling UK skateboarding culture?
Andy Holmes: It was a crucial means of communication that spread energy throughout the scene – remember this was pre-internet, so the magazine was a key way to disseminate news. R.a.D was the first re-emergence of widely distributed skate media in the UK since the 70’s boom, a mainstream title that didn’t behave like one.

The standard of photography was high and the editorial was unconventional, it spoke as one of us, not one of them. I think the original editor, Tim Leighton-Boyce engendered an atmosphere that was pretty unique; encouraging key protagonists around him to contribute at all levels, across media. The attitude was open-minded and experimental, with a deep respect for the subject. This approach was then carried through to the wider public, by encouraging editorial contributions in any form. There’s an inclusive approach running throughout the magazine, that inspired people to get involved & build a scene. The publication continued to develop and change throughout it’s life, always drawing in new contributors and influences. Many people got their first break or exposure through that magazine.

FB: Can you talk me through skateboarding’s death, re-birth and progression in the UK?
AH: Skateboarding started gaining popularity in America, especially 1975 onward, and once it caught international media attention it quickly exploded worldwide. It became mainstream news globally and was typically billed as: “The latest craze from the States”. This exposure brought an influx of participants, skateparks were built, and money flooded into skateboarding. 1975 – 77 were boom years, but by ’78 it was a very different story; a number of factors combined to rapidly send skateboarding’s popularity off a cliff. A shift in global media attention, toward the “next big thing” certainly played a decisive part, suddenly skateboarding was classed as “yesterday’s news” and at the time, it felt like it almost disappeared overnight.

The industry collapsed, shops closed and all the magazines disappeared – everywhere. The money that moved in looking for a quick profit, moved out en masse. What was left in the UK, and everywhere else, including America, was a small group of people who still wanted to skate, that weren’t going to stop – irrespective of what the rest of society thought. It was a harsh period that lasted for about four years, but it sorted the wheat from the chaff. Anyone still skating during that time was definitely committed; the only reason to do it was for the love of it.

Little “pockets of resistance” formed across the UK & managed to connect by meeting at contests held by people like ESA and SSA. You got grief if you were a skateboarder during this period – there were too many kooks around with lame opinions. Skate harassment was very much a reality in the UK 1978 onwards and skateboarding was definitely an “underground” activity. In the face of this adversity, these isolated pockets of skaters that formed everywhere began to connect, at a domestic and international level. That was the start of the re-birth, which continued to build and grow more steadily, especially from 19820 – 83 onwards. There was an informal, hardcore, global network that linked up to keep skateboarding alive – different communities, in different countries, connecting 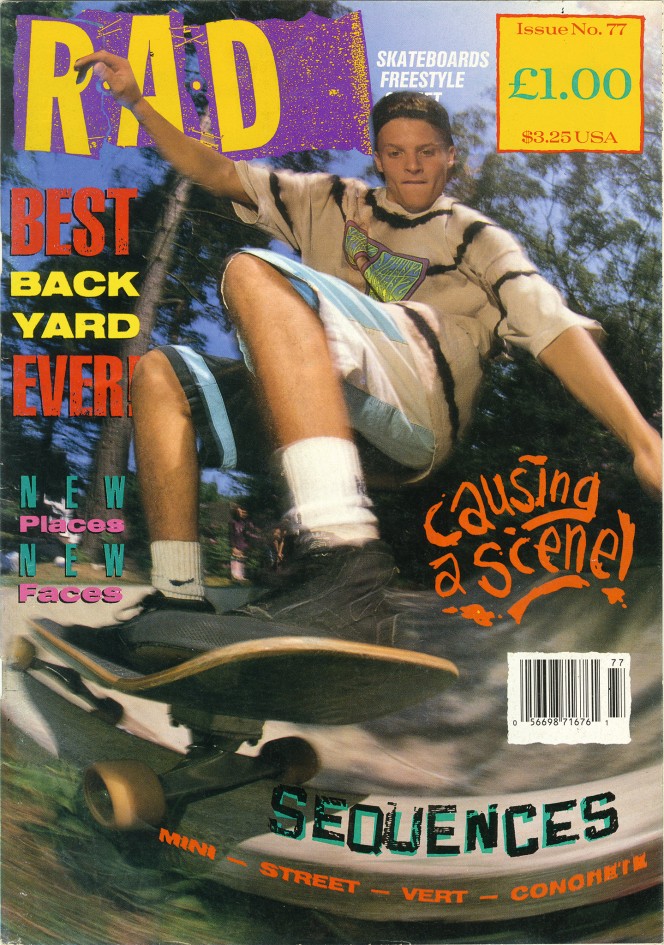 FB: In terms of skateboarding culture, to what extent was R.a.D a satellite for what was going on in the US?
AH: It was very distinct to the US mags and it did things they probably wouldn’t do, like putting unknown amateurs on its cover. R.a.D celebrated the everyday skaters out there and placed as much importance on locals as sponsored riders. It definitely supported talent, if you were good enough, you could get in, whether you were famous or not. First and foremost R.a.D represented the scene here, such as spots and riders you could relate to, so it provided information that wasn’t in the US magazines. It also covered the best international talent passing through and even managed to break some big stories before the american mags.

FB: How did the British skateboarding culture differ from that in the US?
AH: The culture or scene is similar in some ways: it’s diverse and resists general categorisation. The environment certainly differs here though, and that has an effect. We have the UK weather to deal with for one thing, it’s not sunny all the time like SoCal. The lack of light was a difficult thing for the R.a.D photographers to deal with, but it upped their game. We’re also lacking those beautiful smooth sidewalks, here it’s pure council carnage. There’s a lot of kinked, badly built 70s concrete around too, that’s still being ridden. So I think all these things combine to create determination and a certain “rawness” in response to UK terrain. 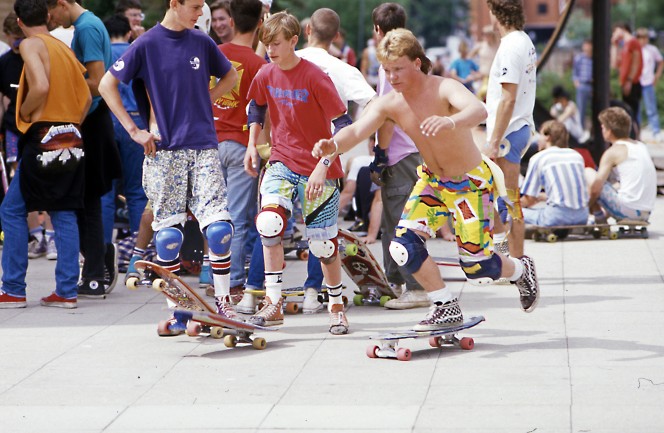 FB: What was behind this paradigm shift that saw R.a.D change from BMX to skateboarding?
AH: Tim Leighton-Boyce was the editor at BMX Action Bike and Dobie Campbell was also contributing as a photographer,
both wanted to see a UK skateboard magazine exist again and they were always pushing to include more skateboarding in Action Bike. Gradually more skating featured in the magazine and the response from readers was generally positive, it was looking like skateboarding was starting to grow globally too.

At the same time, BMX was starting to crash in the way that skating had, moving from boom to bust. Mainstream media attention turned elsewhere, sales dropped and the Action Bike publishers could see BMX was shrinking. Tim and Dobie seized the chance to push for a change in emphasis, from bikes with a bit of skate, to skate with a bit of bike. The publishers took a gamble and agreed, R.a.D was born. Shane O’Brien was an important early contributor and Nick Philip was another key player in this transition, adding incendiary design and sub text from a BMX perspective. BMX has an integral part in the story of R.a.D and we want to look at that properly after completing the skate book. It deserves its own project.

FB: What is it about skateboarding that brings people together and generates such creativity?
AH: Maybe a shared love of the activity, a common bond. Also the lack of rules, the lack of structure, how good it feels, a freedom to approach it however you wish – no right or wrong. At a certain level, skateboarding is all about creativity, and style is everything. You have to decide what you do and how you do it, in the moment. So the whole act is arguably live creative thinking with physical consequences. Maybe that’s why there’s a natural link to other aspects of creativity and why the wider arts are found all around skateboarding.

Donate to the Read and Destroy archive book project here.

Tagged with: Read and Destroy, skate Show me more: Art