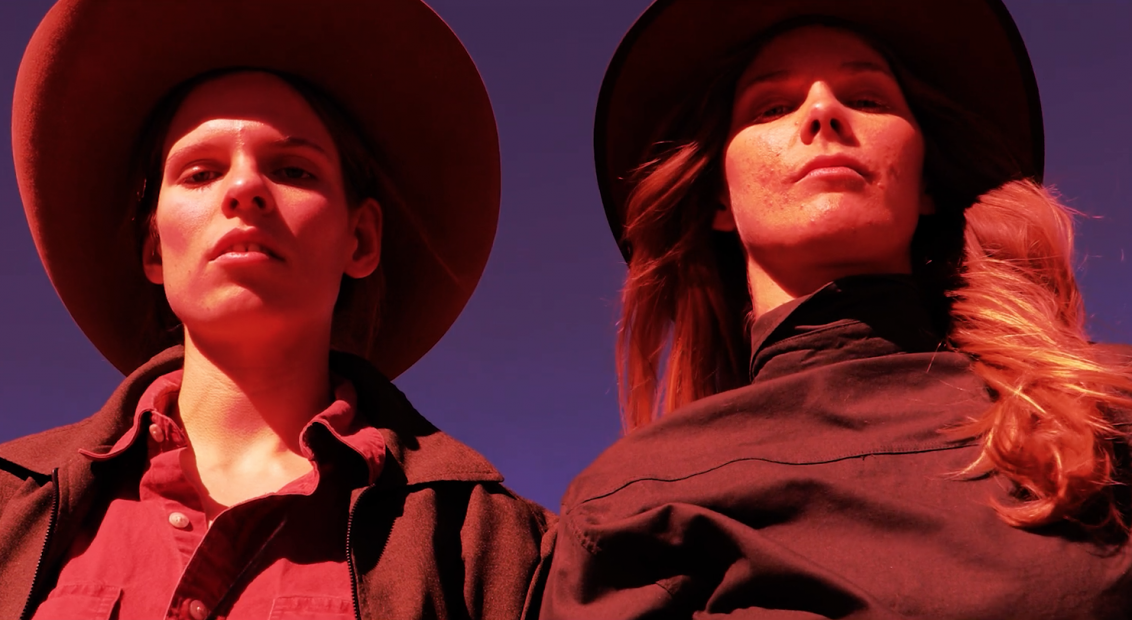 The Iron Sisters is a modern twist on an old school western, igniting conversation by reimagining two spaces usually dominated by men; our film screens and the American Frontier. Amidst a void of barren land and insectile flashes of nature, the story follows two sisters played by up-and-coming writer-slash-actor Anna Newell and renowned model Kat Hessen (and budding writer/director), having swapped her Yeezy campaigns and big-name catwalks (Chanel, Mui Mui, Stella Mccartney) for a Western shirt and lasso.

This town certainly ain’t big enough for the patriarchy. Women roam the land, enjoy a gentle relationship with plants, suck on blueberries, laugh in their solitude and sometimes, give into their “ darker, God-given tendencies”. Bound by Robert Lang’s photography and filming, the film is said to have been “born from staring at a bottle of Jameson”, $388 and a shared value of “challenging the violent myth of masculinity.”

We exclusively premiere the film below, alongside an interview with Lang, Newell and Hessen.

The Iron Sisters from robert lang on Vimeo.

Robyn Sian Cusworth: What made you want to make a film with this message?
Kat Hessen: We’ve all grown up in a world that considers the objectification of women a foundation of  culture and entertainment. There are so many examples of this – but the fact there’s famously more naked women on the walls of the Met than there are female artists exhibited says it all.
Anna Newell: We wanted to explore a world where a woman’s instincts are not hidden, manipulated or suppressed, whether it be an instinct for love, tenderness and friendship or lust, power and rage. A space where they were not the second sex.
KH: We often shy away from confronting the problem of passive, supportive roles for women in film – women are celebrated as the companions of powerful men, but rarely get to live in their own universe.  The sisters in our short have never been considered “less than” and the traits we might consider with ‘gender biology’ are claimed here as pure nature.

“We wanted to explore a world where a woman’s instincts are not hidden, manipulated or suppressed. “

RSC: I read that you guys have some history with extraordinary women…
KH: [laughs] Yes! My grandmother’s great grandmother was tried for witchcraft in Norway – her only “crime” was being more intelligent than her male peers. She was gifted in medicine and had an incredible grit but her fellow villagers said she could make the ground swallow the livestock of men she didn’t like. Fortunately, she was born a touch too late for a bonfire trail and my grandmother actually became the first mayor of that town many years later.
RL: My great grandmother’s sister was also accused of being a witch in Aberdeen, Scotland in the early late 1800’s. She came from Scottish blue blood and to protect the family name they gave her the nickname ‘mad Marje’.

“My grandmother’s great grandmother was tried for witchcraft in Norway – her only “crime” was being more intelligent than her male peers.”

RSC: Wow, that’s quite the connection. So Kat, how is it moving away from your stomping ground of fashion to film and writing?
KH: Fashion is a very small (albeit very profitable) part of my life, and I’ve only worked occasional modelling jobs since leaving NYC in 2011. I moved to California, went to college in LA for a while, got certified as an EMT at UCLA, and now I’m studying film production in San Diego. Writing and directing is where I want to go, so this project has been a total treat.

RSC: The no-make-up stance in the film was really refreshing, it reminded me of work by activist-artists like Petra Collins.
KH: It was a logical emittance as these sisters live in a matriarchal world and they’re crossing the desert on foot. Maybe women do wear make-up in the world that we have created, but these women don’t. I’d say that Petra Collins and her peers work to empower women and show diversity in a sexualised paradigm. We’re trying to get away from women needing to be undressed and sexualised in the first place – the sisters aren’t a fantasy, they have a fascinating story to tell.
AN: We decided that our characters would be completely covered from neck to toe, the way we often see men in cinema. In my early twenties I loved Western movie heroes like Clint Eastwood and Paul Newman, they’d be wearing loose clothes, a hat and have dirt all over their face but you’d watch them and feel they were powerful, beautiful, strong.

RSC: I have to admit, I did laugh at how passive the male character was in the short. It was alien. Was it ok to laugh!?
AN: Of course! Seeing the opposite of what we are used to seeing can come off as absurd. But it’s funny, some men we have shown the short film seem to have the opposite feeling, they felt a little more disturbed!

RSC: So what are you guys watching at the moment?
RL: The last thing I saw at the cinema was The Square by Ruben Östlund and The Florida Project.
KH: Oh, the cinema by my house is so bougie, it gives me indigestion! I saw the play Vietgone by Qui Nguyen this week at the San Diego Repertory Theatre, and I watched the movie Real Women Have Curves by Patricia Cardoso at my house last night. Both made me laugh, a lot.
AN: Lately I’ve been watching a lot of late 80’s, 90’s  and early 2000’ erotic thrillers. Eyes Wide Shut, Unfaithful, Fatal Attraction, Basic Instinct.

RSC: Are you inspired by these themes?
AN: I’d say the Beat Generation had a big impact on me when I was younger. Jack Kerouac mostly. I loved how free and open his characters felt, picking up and hitchhiking, talking until the sun came up, swimming naked and eating lots of apple pie a la mode. I suppose they capture that “alive” feeling that I am always hoping to create in my work. These days I like non-fiction psychology books and bad beach reads.