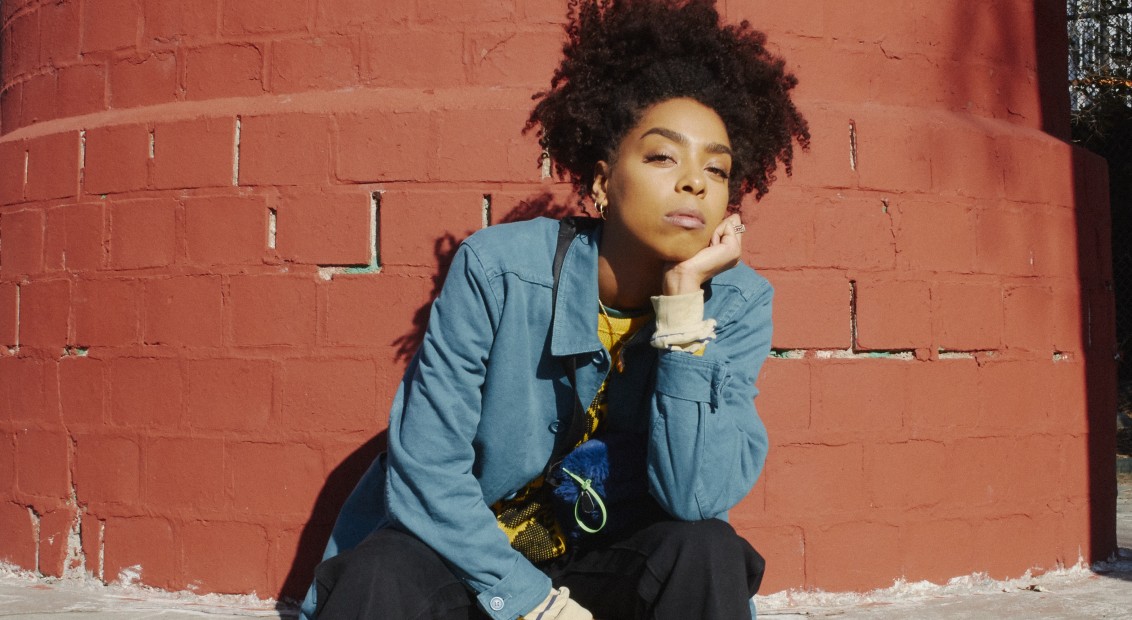 “When I moved to New York, I didn’t know a single person. Skating saved me after getting kicked out, I was depressed and my entire life was left behind. It definitely saved me…” Briana King tells us, having moved to New York via Los Angeles and Sydney in early 2017.

Upon moving to NYC, King soon connected with Danielle Melendez,  Yasmeen, and Luna. Bonding over a mutual love of skating and a summer spent wandering the streets of the city together, the four quickly formed their own female skate crew. However they refuse to give the group a name in order to maintain it as inclusive and accessible as possible – a conviction that has informed all of their actions on-and-off-line thus far.

On the last truly warm and sunny morning in November, we met Briana and best friend Danielle. The girls suggested they meet just across the river from Coleman Skatepark so that they can take us to their favourite skate spots in Dumbo, Brooklyn. 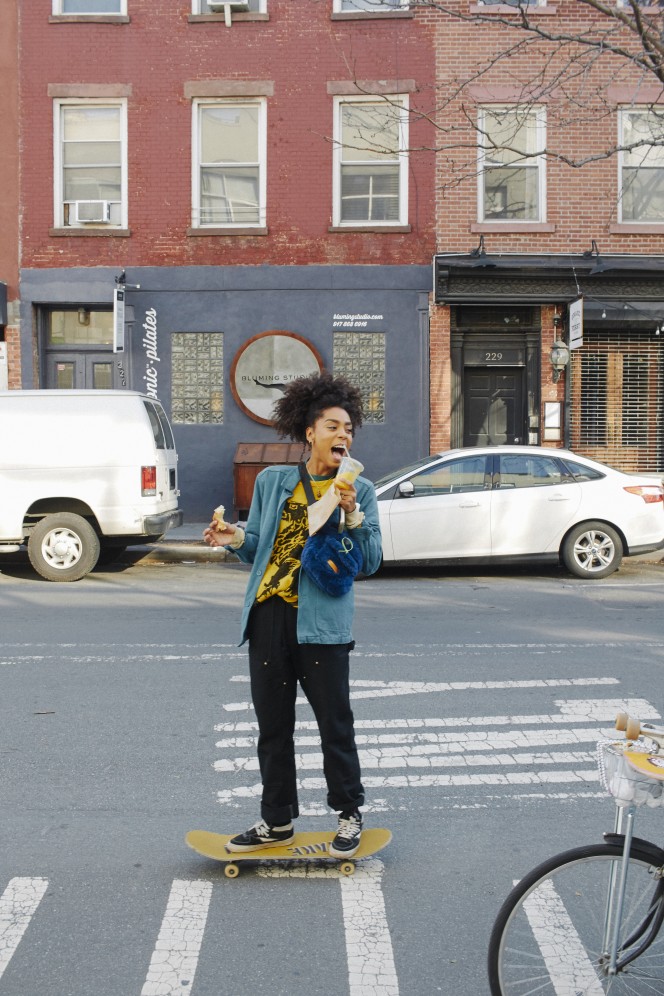 Undine Markus: What’s your name and how old are you?
Briana King: Briana, I’m 25.

Undine: What’s your hometown?
Briana: East Los Angeles, but I lived in Australia for five years. I moved to New York like seven months ago.

Undine: Where’s your current base in New York?
Briana: Brooklyn.

Undine: What drew you to skating?
Briana: I skated for a few months as a child, but I picked up skateboarding when I moved to New York because I had nothing better to do, and it made me happy.

Undine: What do you do aside from skating?
Briana: I work in fashion design, also marketing and PR.

Undine: What are your favourite clothes or designers to skate in?
Briana: KNORTS. The most comfortable. And it’s cute!

Undine: How does skating make you feel?
Briana: Happy, excited, scared, loved by everyone around me that skateboards.

Undine: How did you form your skate community in New York?
Briana: My skate community is mini because I wanted it to be mini. It’s just me and three other girls, Yasmeen, Danielle, and Luna.

Undine: How did you guys connect?
Briana: Yasmeen, she just followed me on Instagram. When I got kicked out of Australia, I publicised that on my Instagram and she invited me to skate. That’s where I made all of my friends. When I moved to New York, I didn’t know a single person. Skating saved me after getting kicked out, I was depressed. My entire life was left behind. It definitely saved me, otherwise, I would be lonely.

Undine: And what’s your favourite deck?
Briana: My steady bumping skateboard from Australia. Now I don’t have it because I can’t get it from Australia. One of my friends brought me another one this summer, but then I broke it.

Undine: What’s your favourite skate moment from last summer?
Briana: There was a time when we skated from Manhattan all the way to Bushwick, which was like solid seven miles. During that trip, all of us got lost. In the company of my friends, it was really fun.

Undine: What are some of the things that skating has taught you?
Briana: I don’t really think when I’m skateboarding. I think that’s what I love about it so much. I just do it, and I feel good. That’s the end of it. Almost everything else I do in my life, I have to think about it, and I stress about it. I never question if I’m good enough, it just happens. It’s my getaway from my own crazy brain. 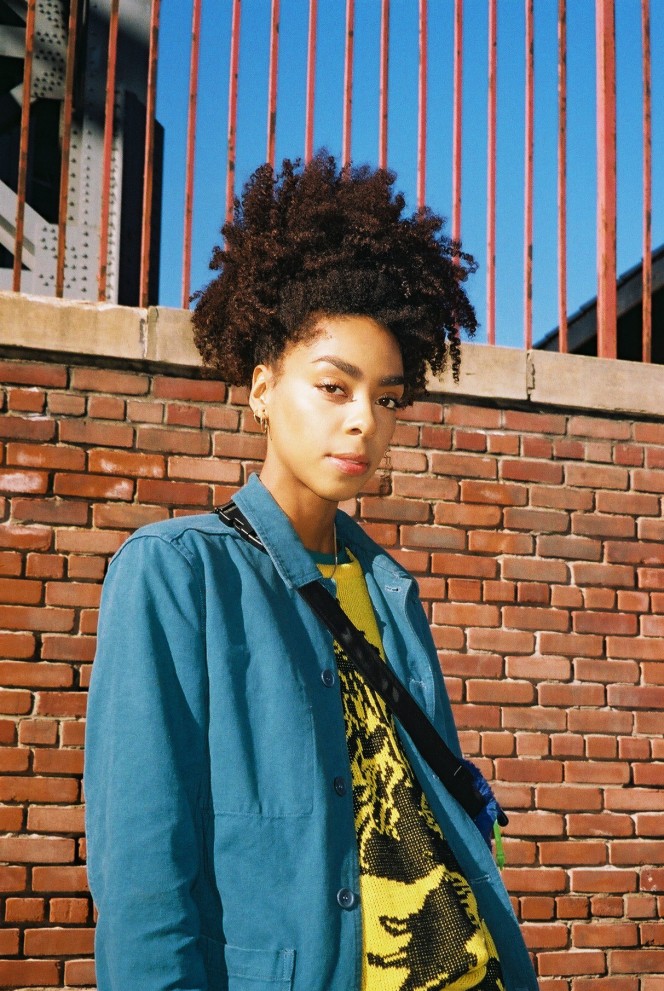 “Honestly, isn’t shredding on someone’s property and eating the floor better than just selling drugs, or doing other shit that harms us internally?” 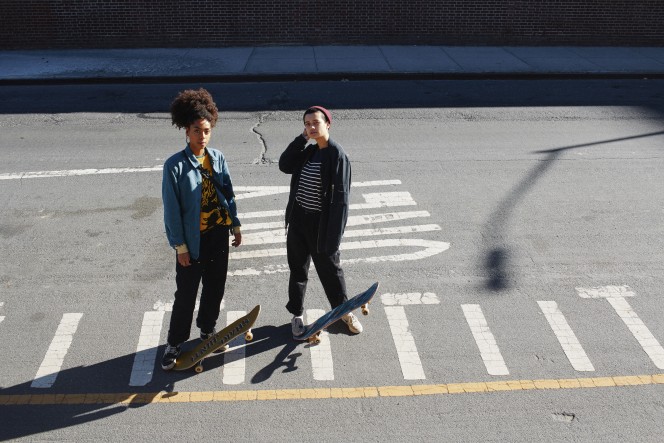 Briana and Danielle by Mark Aghatise

Undine Markus: What’s your name and how old are you?
Danielle Melendez: Daniele. I’m 21.

Undine: What drew you to skating?
Danielle: I was seventeen or eighteen when I started to draw and read books at this park called (Maria) Hernandez in Bushwick, Brooklyn. That’s where I first started skateboarding. I met a bunch of guys and joined the Knickerbocker Park crew, there were eighteen guys and I was the only girl.

Undine: Who do you skate with right now?
Danielle: I skate with the girls, we have a crew. Also, the Cooper Kids at Cooper Park in Bushwick, that’s my favourite park. Usually everywhere though. Skating over the bridge, going to LES (Lower East Side) and Chelsea, we kind of just hit everywhere.

Undine: What’s your favourite deck and how many do you own?
Danielle: I don’t know, I tend to give them away. Probably the Knickerbocker boards, we have our own.

Undine: How does skating make you feel?
Danielle: Skateboarding is an art form. It’s like dancing with a stick of wood, slapping the shit out of yourself or eating the floor. Everyone has a different type of style and bags of tricks in their little pockets. It’s so freeing. You just hop on a board, skate through traffic, meet up with your friends, skate with them, learn tricks, and have a good time.

Undine: What’s your worst skate injury?
Danielle: I broke off a piece of bone on my kneecap. It was last winter. It was bad!

Undine: What’s your favourite moment from last summer?
Danielle: It was a good summer man! I don’t even know what to pick out, it was lit! We hit everything. I feel like I’ve skated the hardest this summer. I went to the craziest gigs, art shows, and parties. I got to bond with more girl skaters. I experienced freedom, openness, and zero judgments in my space.

Undine: What’s your favourite music to skate to?
Danielle: Electronic, punk. I don’t really listen to the same thing every day. It’s just random playlists, always something that gets me pumped.

Undine: How do you see the skate world evolving?
Danielle: Now the female culture is joining in on skateboarding and women are not as afraid as they were before. I remember damn well, when I started there were no girls, not one damn girl! I hung out with bros all day. It’s pretty cool to see that it’s evolved into something big. But it’s always personal, it’s something that you don’t know until you’re really in it. Honestly, isn’t shredding on someone’s property and eating the floor better than just selling drugs, or doing other shit that harms us internally? It’s so productive. When skating, you have to understand the physics and your body completely as one. It allows you to get to know your inner core because it’s hard. This shit takes guts, physics, and confidence. You really have to put yourself out there and learn about yourself.

Undine: And what has skateboarding thought you about yourself?
Danielle: It’s taught me patience, not to get angry quickly and to be a part of something other than your normal family. It’s not even like a team effort, it’s about sharing your thoughts with someone and feeling that they are doing the same thing. It’s just so comforting to put yourself in a culture where there’s no judgement, no one cares what race you are, they don’t care if you’re rich or poor, or if you’re fat or skinny. You never have to worry about someone judging you. Most people in the skate culture are really nice. I love the fact that it’s like a family, you join a secret family – you just have to skate to be part of it. 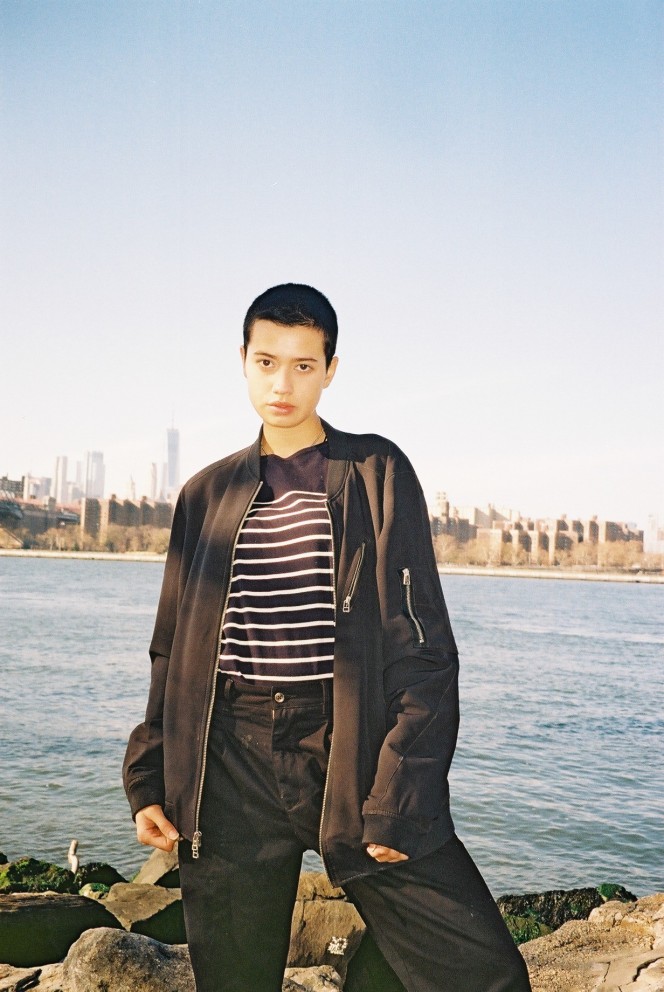 “I love the fact that it’s like a family, you join a secret family – you just have to skate to be part of it.”