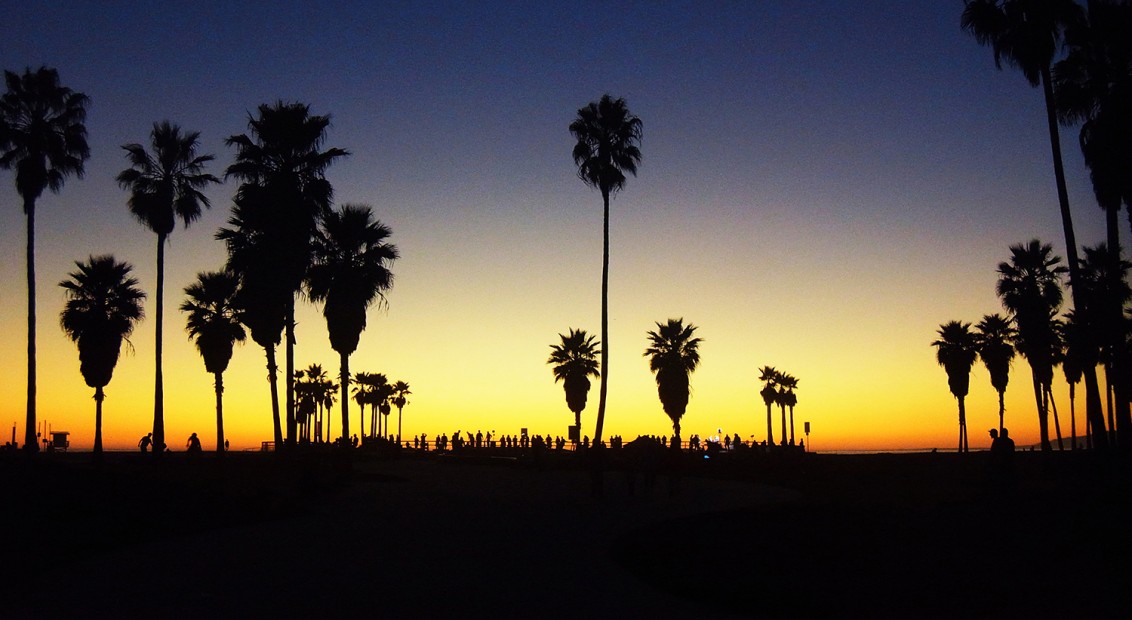 Documenting the backlash against Snapchat’s gentrification of Venice Beach

For photographer Robert Lang, the LA’s iconic Venice beach location is characterised by those who inhabit its famous boardwalk. The ones that gather there are a melting pot of locals and tourists, hoping to grasp a little bit of what has kept the location so captivatingly weird all these years.

Only now that creativity and individuality faces potential corporatization at the hands of Snapchat, who – in 2013 – bought a storefront along the promenade to sell their spectacles at an exorbitant price. And other corporations are set to follow, leading to mass gentrification of the Beach and growing tensions between the tech companies and locals. Cue protests across the city, as locals proudly display posters with slogans such as #keepveniceweird, #snapoutofit and #deletesnapchat.

Lang’s latest zine, 11:11, is a celebration of LA’s iconic artistic hotspot as it is a brightly-hued warning to investors; Keep Venice Weird, or face the wrath of the locals who love it. 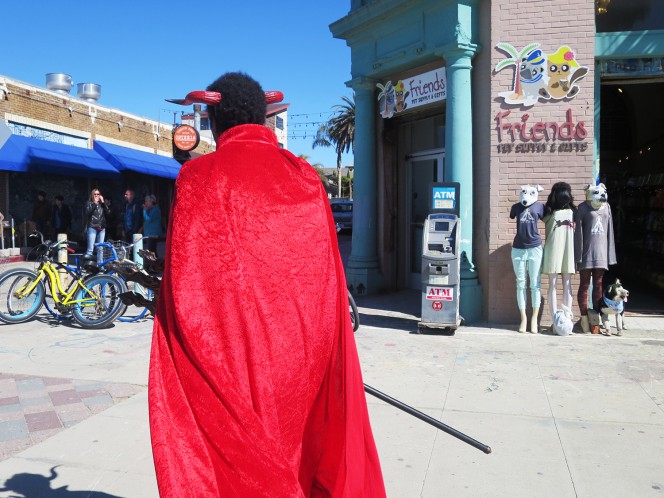 “The Venice community is happy for businesses to move here but to do it the right way and not try take over in a bullish manner.”

Susie Joseph: What is it about Venice Beach that inspires you so much?
Robert Lang: Every day is different down here and feels like you’re on an endless holiday. I am drawn to the odd balls and the unconventional ones who live life on their own terms, especially since the beach is littered with artists. When I was 21 I travelled Europe in a VW Camper Van working on farms for a year in 2003 and lived off the land, so I understand that nomadic lifestyle and how it can feel like you’re free of limitations but how it can also be very difficult if you live recklessly. It’s all about community and that is what makes Venice Beach so special. I can walk down the boardwalk for an hour and experience human behaviour at its most beautiful or filthiest. I would rather people-watch here than at the Polo Lounge in Beverley Hills.

Susie: You mention that you have felt a general shift on the VB boardwalk over the last year, especially since Snapchat moved in. Could you please describe this shift?
Robert: It’s just a little tense outside the Snapchat headquarters as there is still the dedicated protesters who have been there for months with their placards about their distaste for Snapchat. Just last week I saw workers there planting high trees around the perimeter so you can’t see inside the property anymore which I assume is for security and the Snapchat logo sign that was outside has now been removed and taken inside. I heard a Venice local shout at a passer-by who was on a hover board, “You are the reason Venice has gone to shit.”

Susie: Are there any people that you have spoken to during this project who feel anything other than negativity towards these global corporations moving into the space?
Robert: The Venice community is happy for businesses to move here but to do it the right way and not try take over in a bullish manner. 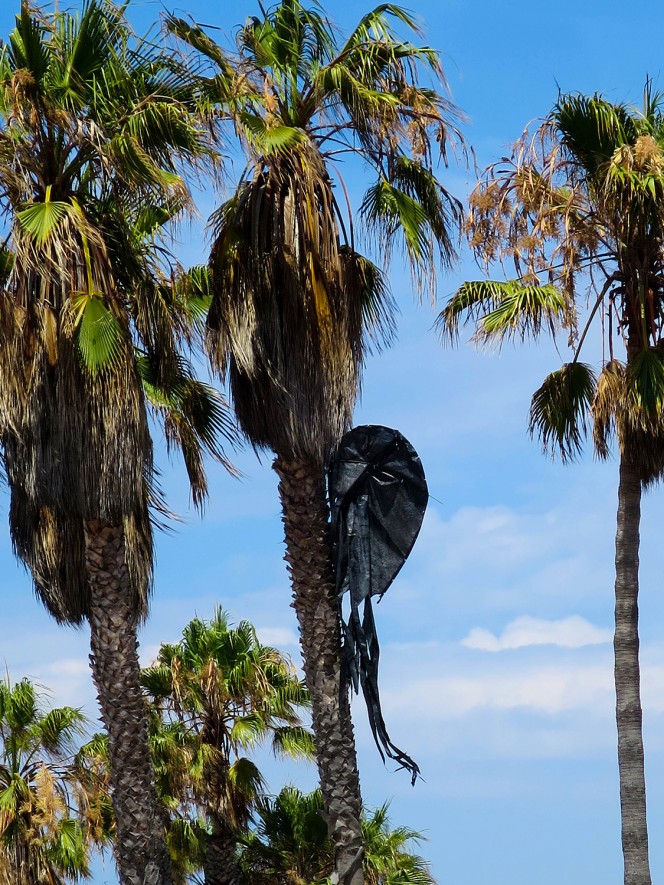 Susie: Your zine highlights LA’s weird and wonderful communities: a side of the city that often gets hidden under the Hollywood excess.
Robert: LA is undoubtedly known for its fixation with Hollywood and its extreme obsession to obtain the fountain of youth. If you look past that and remove your blinders the city is beautifully tragic. It’s weird and wonderful and to really experience the city you have to take city transport. Just by taking the metro downtown or a bus you are invited into a front row show of citizens who have been coughed, chewed up and spat out by society. LA is truly so unique, I don’t feel like there is another city like this; you could call it a circus but with many acts.

Susie: What brought you to LA originally? How does it compare to other places you have lived in the past, like London or South Africa?
Robert: I grew up in apartheid South Africa and was a teenager by the end of it, so diversity wasn’t celebrated in the early 90s. I got tired of the small city mentality in Durban and as soon as I finished high school in 2000 I moved to Camden, London and life couldn’t have been any different here and was a huge culture shock but for the best of reasons. I started taking photos of my friends on nights out in Camden during the indie rock scene until 2011, which I turned into an exhibition Filthy Gorgeous Camden Town last year at the Doomed Gallery, which resulted in it being turned into a photo book in April 2017. Like every scene you either get sucked into it or you move on to find a new one and mine was LA, as I wanted something new and fresh. I came for three months in 2011 but wasn’t so keen on it at first so moved to New York before heading back, and I’ve been here ever since. My photos are influenced now by LA and I’ve released a series of work as a homage to the culture of LA.

I am making the shift to film and made my first short this year, The Return to the Pleasure Dome, starring actress Skye P. Marshall as an inspiration and homage to Hollywood legendary director Kenneth Anger’s 1954 cult classic The Inauguration of the Pleasure Dome. I envision my own version of events as a paraquel. 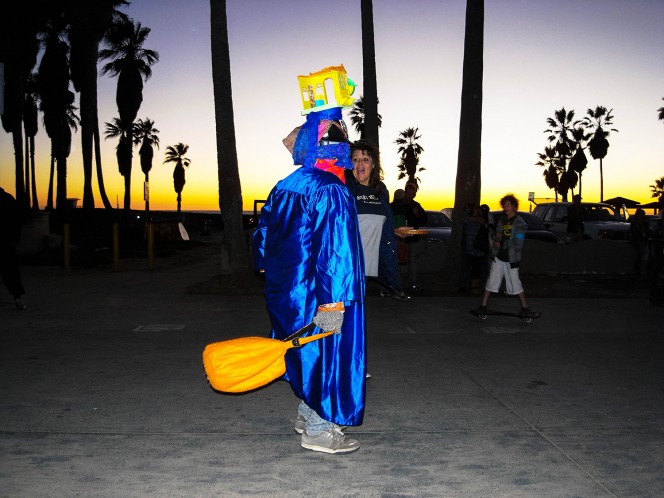 Susie: How did you gather subjects for 11:11? Were people quite willing to be involved, and supportive of your mission?
Robert: I just hung out on the beach a lot, every day around noon, and you get to know people or you take their photo and talk to them. It didn’t start out as this project, but it just developed as that is what the social climate that is happening right now on the beach.

Susie: If you could summarise the message you’d like 11:11 to deliver to readers, what would it be?
Robert: Keep Venice Weird.