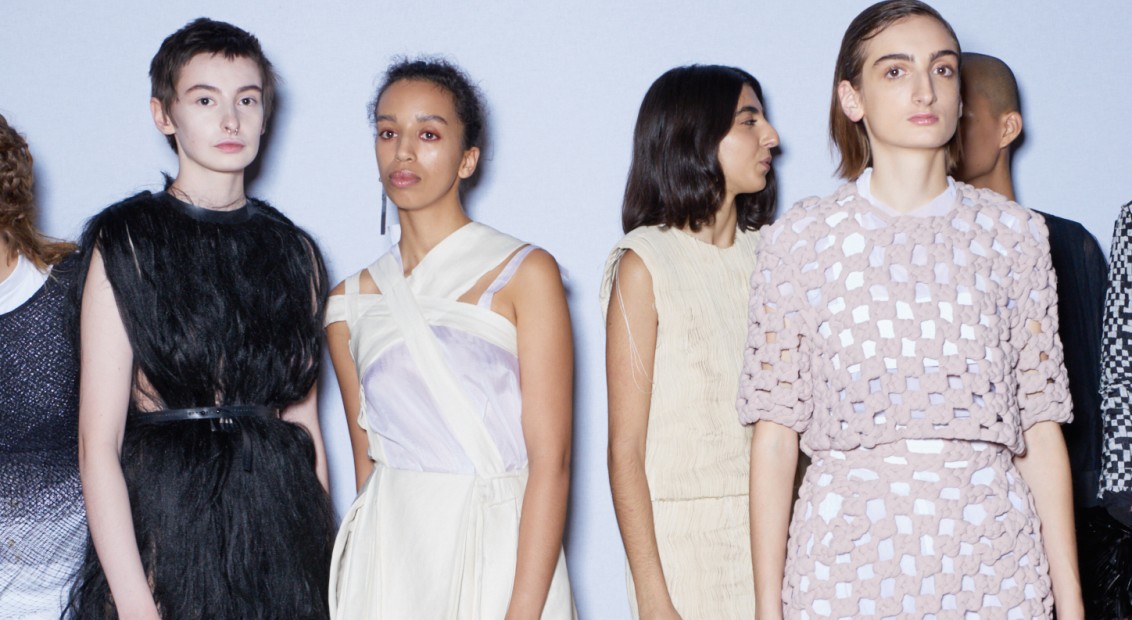 Six years in the business, Phoebe English looks back on her design archive

“In fashion you are working from one collection to the next, so often there isn’t really time to contemplate the show you’ve just done,” says designer Phoebe English, contemplating the ever-demanding fashion cycle. So when the V&A invited her to do just that as part of its Fashion in Motion series last week, English jumped at the opportunity.

Marking the sixth anniversary of her womenswear line, the event saw the London designer recreate her incredible SS18 collection in the iconic Raphael Gallery space. Open to the public, visitors were able to get up close and personal with English’s archive and specifically her latest collection: A collaboration with puppet maker Judith Hope that saw a series of working toiles in quarter scale beside their life-size companions as an ode to the traditional process Parisian couturiers used.

Following on from the exhibition English will be taking part in the Making It: Careers in Fashion talk at the V&A on 25th November (mark the date). Here, the designer gives us an inside look into her career, her success and her never ending love for the V&A. 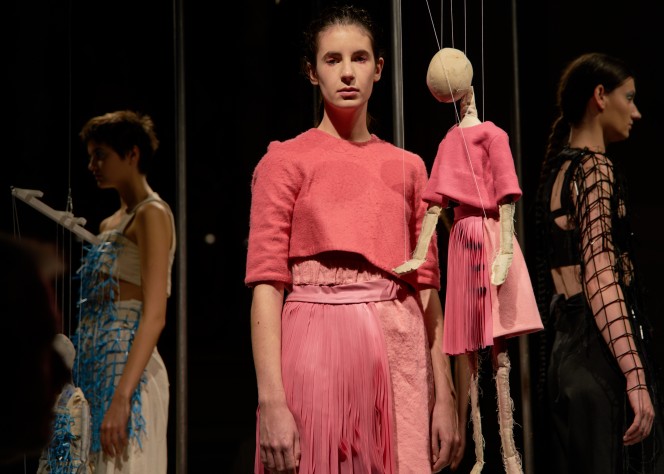 Natalie Walsh: Congratulations on the six year anniversary of your womenswear line, does it feel like it’s been 6 years?
Phoebe English: Thank you. No, it doesn’t. It’s so strange to realise that time has passed. In fashion you are working from one collection to the next, so often there isn’t really time to contemplate the show you’ve just done, how it worked, if it worked etc, as you’re straight into sales and then straight into production and then you do a whole new show. So I suppose doing Fashion in Motion has been the first time I’ve been able to spend the time actually looking properly and reflecting on what we’ve done over the past couple of years. It’s the first time I’ve ever really looked at it as a whole body of work.

Natalie: How have you, as a designer, changed and developed over the past six years?
Phoebe: Well, you’re developing all the time. There are struggles, dramas, disasters on a daily basis that need constant attention and monitoring. It takes a huge amount of energy to keep all these aspects under control and running smoothly as well as the welfare of the people who make up your team. I suppose I’ve become better at balancing those things with the design side as it is very hard to design and run a business simultaneously. In terms of the design side, I guess that’s up to everyone else how I have developed – I think I’m probably too close to it! 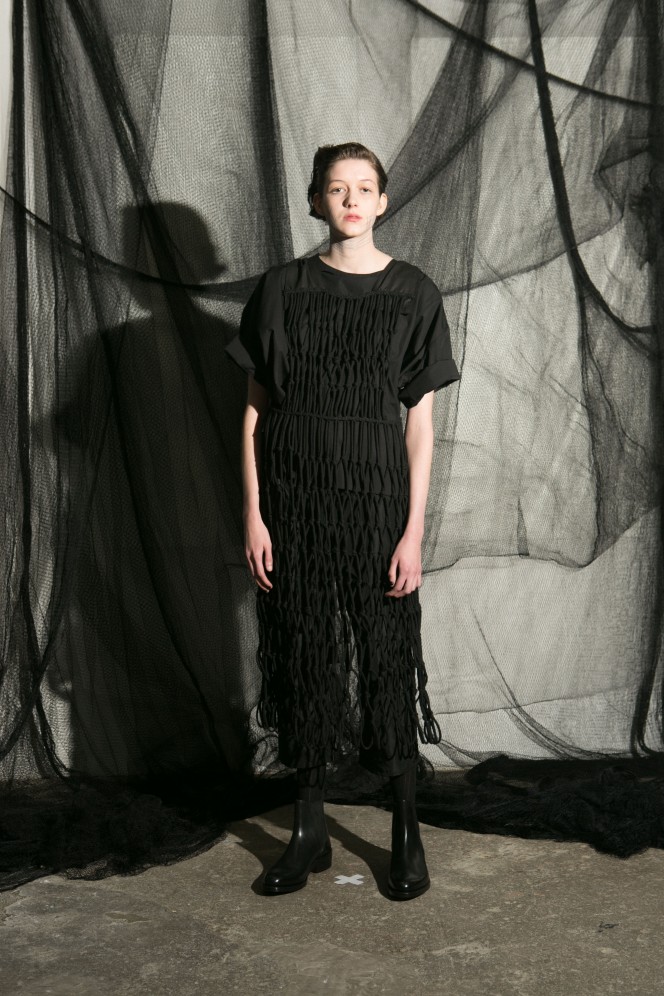 Natalie: You’ve mentioned that the V&A has given you significant inspiration over the years, can you tell us more about this and how it’s inspired you?
Phoebe: Yes, it has been a very important to me as a place of inspiration. My Aunt Rose took me there to see the opening of the Radical Fashion Exhibition when I was fifteen and it totally changed my direction. It was a very formative visit. Even when I walk through the main entrance now I still get goosebumps on my arms from the excitement of the anticipation of what might be found through those mighty doors. It’s as magic a place to me now as it was when I was a teenager.

Natalie: How did you choose which highlights of your collections you wanted to present?
Phoebe: For some collections, this was really very straightforward and didn’t take any time at all, but for others there was quite a lot of too-ing and fro-ing. It can be so hard to pick a favourite. Often we went for the most colourful or most textured pieces to aim for that gem-like quality we wanted.

“You never see or experience what it feels like to, for example, trek across central London at rush hour with three huge suitcases of samples and two large rolls of fabric after doing several all-nighters all on your own.” 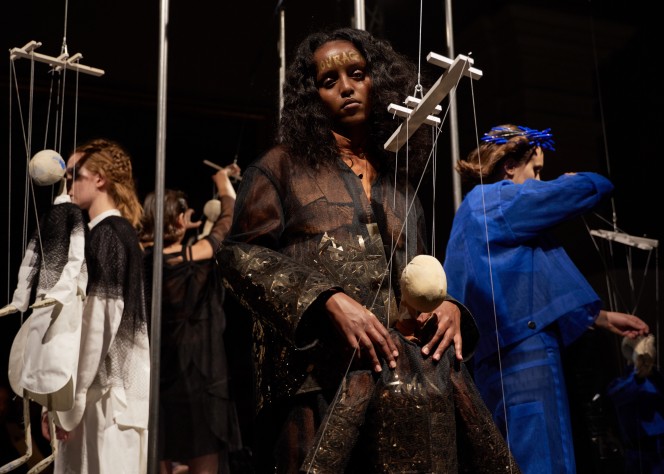 Natalie: You’ll also be talking about your work as part of the Making It: Careers in Fashion talk at the V&A. What do you plan to discuss and what advice would you give to anyone starting out in a career in fashion?
Phoebe: I think I want to talk about the realities. So much of the fashion that people perceive and experience from outside of the industry is so glossy and glamorous and fabulous looking. You never see or experience what it feels like to, for example, trek across central London at rush hour with three huge suitcases of samples and two large rolls of fabric after doing several all-nighters all on your own. It’s a tough industry that’s run by tough people who do a very good job of disguising the realities of how it’s run for some reason. It’s is the least glamorous, glamorous industry. I think that side is important to talk about.

Natalie: Is there anything you wish you could tell your younger self when you were starting out?
Phoebe: Everything will be fine.

Phoebe will be giving a talk as part of the Making It: Careers in Fashion series at the V&A on 25th November.