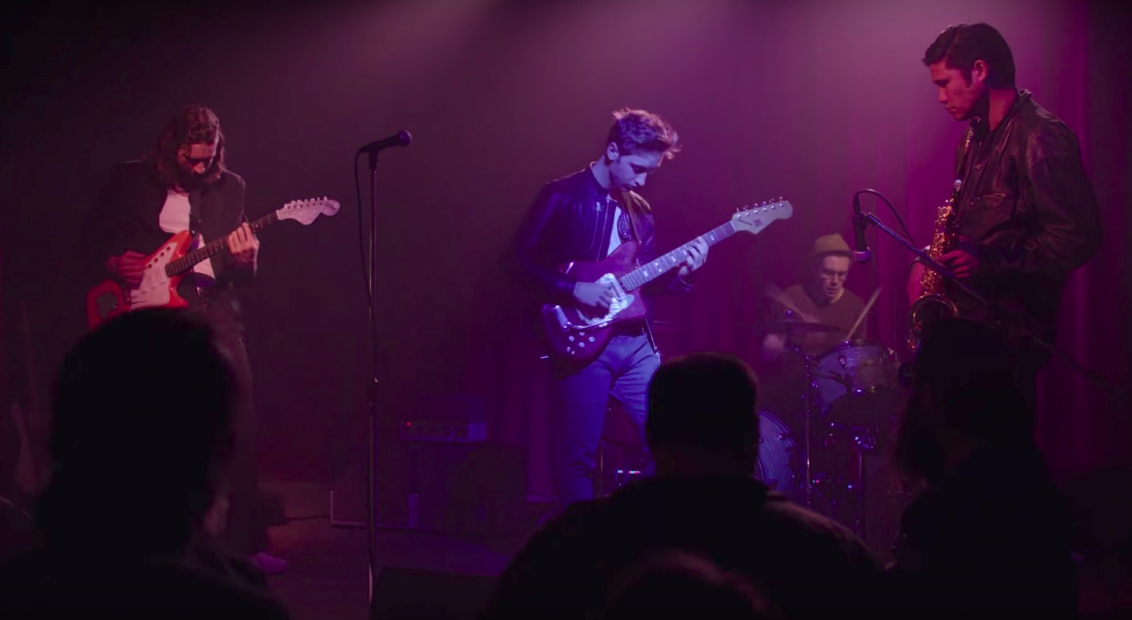 At the Bang Bang Bar

We speak to Trouble, the instrumental trio existing in the world of ‘Twin Peaks’

At the Bang Bang Bar

“[Trouble] exists entirely in the realm of Twin Peaks and almost not at all outside of it,” says David Lynch‘s longtime music supervisor Dean Hurley of his instrumental trio, Trouble, who performed at the Roadhouse in the new series of Lynch and Mark Frost’s cult TV show.

26 years after the show was abruptly cancelled in 1991, the new hotly-anticipated series of Twin Peaks is in full swing; as brilliant and bewildering as ever. Amidst the melodrama, plot twists and overriding suspense, the undertone and foundation of the show in many respects is its soundtrack. Throughout this latest series, live bands have appeared in almost all of the episodes at the Roadhouse, from Nine Inch Nails to Hudson Mohawke to Sharon Van Etten.

The band that exists in an alternate realm receives fan mail in the real world, but whether Trouble itself will release any more music is still unknown.

Clementine Zawadzki: How much of Trouble exists in the Twin Peaks universe?
Dean Hurley: It exists entirely in the realm of Twin Peaks and almost not at all outside of it.

Clementine: How did the project come about?
Dean: Alex and I are friends, and Riley… you really wanted to attempt to do a song together.
Riley Lynch: Yeah, I wanted to get a song to be played on the Roadhouse stage. I told my dad that if he liked a song that Dean and Alex and I came up with then he had to put it in there, and if he didn’t like it then we were out.
Dean: I sort of remember you asking him [David Lynch] and him being like, “well it better be good.” The first stage was this idea of just trying to come up with a song, and when you’re dealing with instrumental music it’s like there needs to be the spotlighted vocal element that’s not vocal, so my first thought was to have Alex come in as a sax player, because that’s the sort of centrepiece of the song. It was basically just to hang out.

Clementine: Did you feel any pressure to get the okay?
Dean: It was sort of a lose/lose situation, because we thought we’d just make some music and if it works it works. The best thing is just to get together with friends and try some things. Luckily it was a good vibe and it really worked, but of course, Riley and I have jammed together off and on for like almost a decade. I first met Riley when he was thirteen. We’re always playing together. I think Alex and I met around 2011 because I was helping to curate some events at Silencio, which is this club in Paris. David was kind of curating an evening every week there with different acts and I really wanted to bring Alex into the fold, and that was David’s first experience with Alex and he really, really liked what he was doing and everything, so it was super organic. 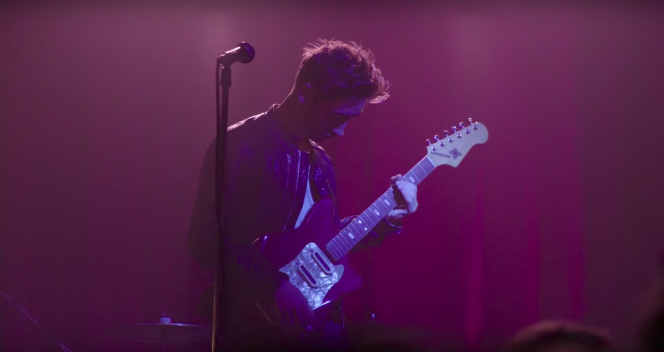 Clementine: How did all your backgrounds fuse together to create Trouble?
Riley: I think it’s like a perfect harmony of all our different particular tastes. There’s a lot of overlap…
Alex Zhang Hungtai: I agree
Dean: I think it’s kind of cool. I remember when Alex was here –and his part is so technicolor, wild, jazzy – he just had such an unbridled spirit, and I’m thinking, “Wow, this is fantastic!” And then Alex made the comment, “It’s kind of nice making something a little more straight ahead.”
Alex: I meant it in a good way, like it has a lot of structure and it has a groove, which reminds of me of the music I used to make, but the music I’m playing now I just feel lost all of the time, and no one really knows what they’re doing and it’s all about dedication to real communication, so it’s refreshing to take it easy and trust Riley and Dean. It feels like you’re at a bbq, and you’re not obligated to bring anything, but then you just show up with a six-pack, and your buddies are like, “Yeah that’s cool, just kick back and enjoy your beer.”
Dean: Well you showed up with a sick sax, you brought that riff element and, as a listener, you can grab onto that and it syncopates with the rhythm. It’s a cool element within the chorus. That’s a lot of the legacy and history in what jazz does, it return to themes, and that’s the same with film music.

Clementine: Did you know what scene Snake Eyes would be used in?
Riley: Definitely not, so that was kind of a crapshoot. I think it fit pretty well though.
Dean: Yeah, it’s one of those things where you’ve got to let go a little bit and trust that it’ll be used in a way that’s hip or works well with the film. It was pretty refreshing getting that kind of working relationship where you do your part and then walk away and trust it’s going to be cool. I know Alex and I have worked in situations where it’s not cool… working with some other filmmakers where you give them something and you get a bunch of notes, so this is a case where three friends have a collective energy and something comes out of it that’s unique.

“Most of the music I write outside of the Twin Peaks world is metal, so I wanted to make metal with Green Onions.”

Clementine: In other cases is it filmmakers that want you to change certain things?
Alex: Yeah, or it’s just not used at all and then they write to us and say they like it but want something that’s easier on the ears.

Clementine: In this case, how important was it to visualise the track while you were creating the music?
Dean: I know at the time, in my mind at least, whirling around were some of the other Roadhouse selections that we were going to have, and it was kind of about getting something… because it can’t all be dream pop or pretty music, so at the time when we were working on this, there was an absence of a harder edge, something that wasn’t pretty, but I think also Riley wanted to do something mean…
Riley: Definitely.  Most of the music I write outside of the Twin Peaks world is metal, so I wanted to make metal with Green Onions. 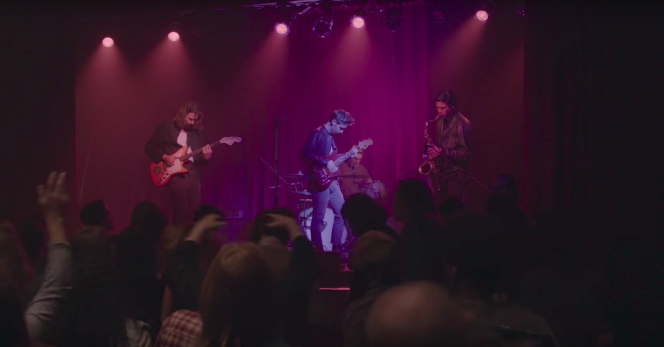 “Everyone was mostly sort of out of the loop of what was happening. Only a few people were able to read the whole script, so it was shrouded in mystery on set as well. “

Clementine: What’s it like working with David? And for you, Riley, working with your dad? It seems anything related to David Lynch has that element of mystery.
Riley: It’s fun. It’s a really good atmosphere on set and everyone’s just doing really hard work. He inspires people to do their best work.
Dean: Our part wasn’t hard, but it’s inspiring seeing everyone work towards a common goal and completely support that vision and do their best to supplement and facilitate it. It’s really cool when you’re on a film set, you see small miracles happening every day, where someone says, “Oh damn, wouldn’t it be great if this was here?” And then minutes later it appears, or a certain prop that’s just thought up, and it appears. So it’s like this small village and amazing things can happen in real time.
Alex: That was probably the best experience for me, just watching everyone working so hard on set and in the post-production that Dean’s involved with.

Clementine: What’s the Twin Peaks environment like?
Riley: Everyone was having a great time. Everyone was mostly sort of out of the loop of what was happening. Only a few people were able to read the whole script, so it was shrouded in mystery on set as well.
Dean: What about the Roadhouse though?
Riley: Oh yeah, it was bizarre.
Alex: It felt like a music festival.
Dean: Yeah exactly.
Alex: I had a good time kicking it with Riley and Dean on set, but it definitely felt like a high school cafeteria, where we had like the really popular kids – the musicians – hanging out in one corner, and all the weirdoes on one side, and there are people trying to fit in and desperately talk to everyone. I remember Riley was being really busy on the set, and Dean and I kind of kicked it and just went to the cafeteria. The actual cafeteria where they cater our lunch…
Dean: Yeah, I remember there was an actual cafeteria there. I forgot that for a second.

Clementine: You mentioned the cool side of the room. What side where you on?
All: The cool side [laughs]

Clementine: Are you Twin Peaks fans?
Riley: Yeah, I was in utero when my Mum was editing Fire Walk With Me… so I guess I was a fan before birth.
Dean: Like an obligatory fan.
Riley: I had to be.
Alex: Forced to listen to it for hours in the womb.

Clementine: And how does the B-side Mother’s Gone fit in?
Dean: Riley and I worked out a sort of groove, just as a backdrop for Alex to come in and do something on top of, but then the three of us jammed on ideas together to get the B-side. I remember when we played Alex the backing track to Snake Eyes and I think you [Alex] were kind of moving around and I remember thinking, “This is good, at least he likes it.” [laughs]
Riley: That was the one we were kind of all together on, and we just wanted something to counteract the more aggressive nature of the first track.

Clementine: Do you think there’s anything for Trouble in the future?
Dean: When Alex and I hang out, we like to work on something, so something’s always happening. It’s just a little harder now he doesn’t live in LA.
Alex: I’m definitely open to it, I mean, whenever the three of us get together to hang out and make some music. It’d be really fun to dress up as a Halloween band or something. Just to mess with people and be like, “Trouble tonight at the Roadhouse!”
Dean: I don’t know why the Roadhouse doesn’t exist in real life. Why hasn’t someone made a cool venue like that and just book tight bands every night? It seems like a no brainer.