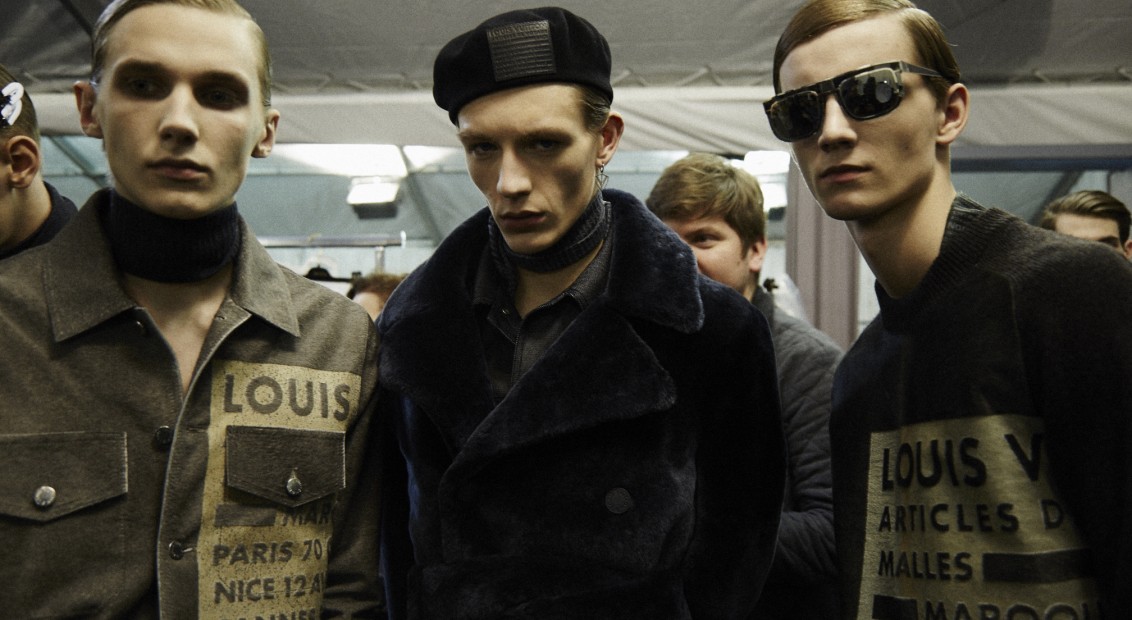 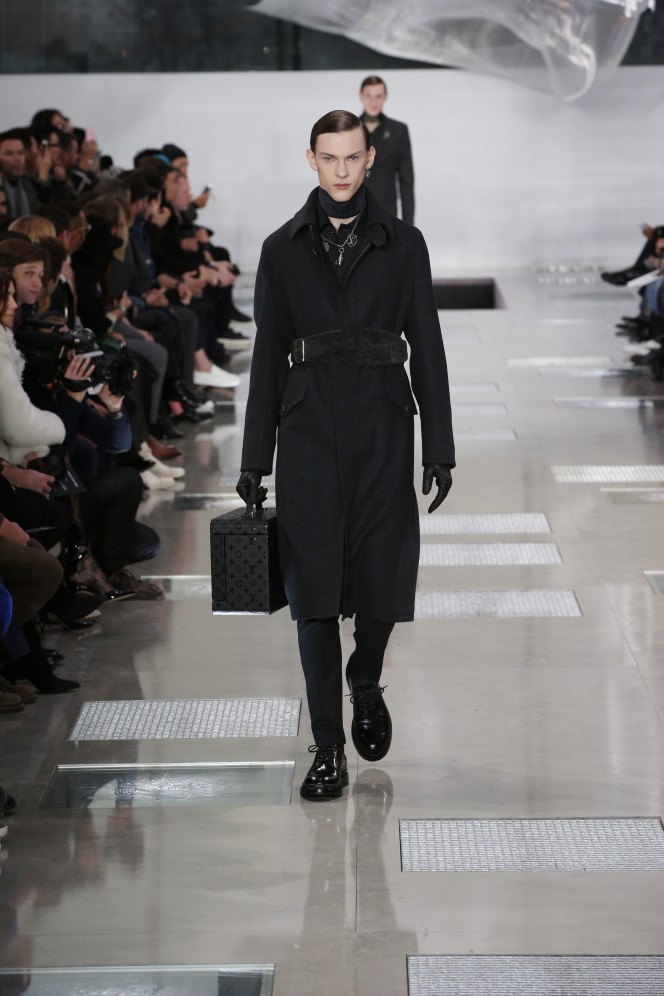 “This season I was inspired by Paris – old and new,” Kim Jones explained at the beginning of the show’s notes. A conversation between now and then, Vuitton’s history is 162 years long – that’s a lot of heritage and a lot of source material. ‘Future Heritage’ it was called, a tribute to Paris’ pride and stoicism in the face of recent horrific events, and a celebration of the City of Light.

The timing of this season’s show was significant – pushed back in the day’s schedule to allow the sun’s twilight glow into the venue –for not only does Paris appear at its most beautiful by the light of the city’s fluorescent glow, but the dusk setting also perfectly framed artist Shinji Ohmaki’s cloud-like installation (made from stainless steel) that softly rippled above the catwalk.

“This is a new installation where cloth is used to make the observer aware of the domains of time and space,” Ohmaki explained. Creating metaphoric substance via art is a trait Jones delivers with such panache, this season the installation added thickness to the designer’s strong cynosure of atavism, with accents of time and perception.

“The cloth moves up and down, causing a fluctuation of the borders that divide various territories.” These intangible territories – periods of time, for Jones – were personified through the designer’s application of generation-specific tokens. Take the satchels, for example, which were worn at the front like WWII veterans, and the snug berets perched upon models’ heads. These pieces of Parisian heritage sat harmonious with an impassioned sense of modernity woven through the innovative fabric choices such as lightweight synthetics and cashmere-silk mixes used on outerwear. While functionality and utilitarian components anchor it firmly in the present.

Designed in collaboration with Jade Jagger,  silver and diamond jewellery adorned each model – brooches, charm necklaces and earrings – inspired by Baron de Rédé, an aesthete infamous for his extravagantly lavish parties. These details paired symbiotically with the Art Deco blue-print of Vuitton’s Parisian past and acted as a core creative encourager. Ribbon motifs that said “Volez Voguez Voyagez” were printed on a full look made of silk and the emblems from Vuitton’s iconic print were super-sized and printed symmetrically and asymmetrically on large outerwear pieces.

Artisanship was present as ever with “Roketsu” – a technique using wax and paint to create a crackle effect – used on denim jeans, jackets and a leather coat. So what seemed perceptibly new was actually rooted in the past: the practice originated in Japan and inspired many European artists – and even the Vuitton monogram – around the beginning of the 20th century. Various territories of design are visited by many, but Jones’ commandment of time-specific connotations and their reproductions is a region that only he can demonstrably explore.

Allen Ginsberg once said of Paris, “You can’t escape the past in Paris, and yet what’s so wonderful about it is that the past and present intermingle so intangibly that it doesn’t seem to burden.” It’s a quote that could well have led yesterday’s show notes. For this season Jones’ celebrated Paris through the ages, plundering tropes from many of the city’s iconic eras he creating a perfectly Parisian hybrid. 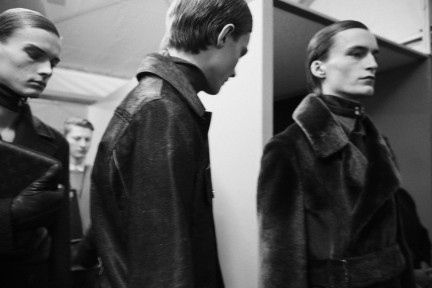