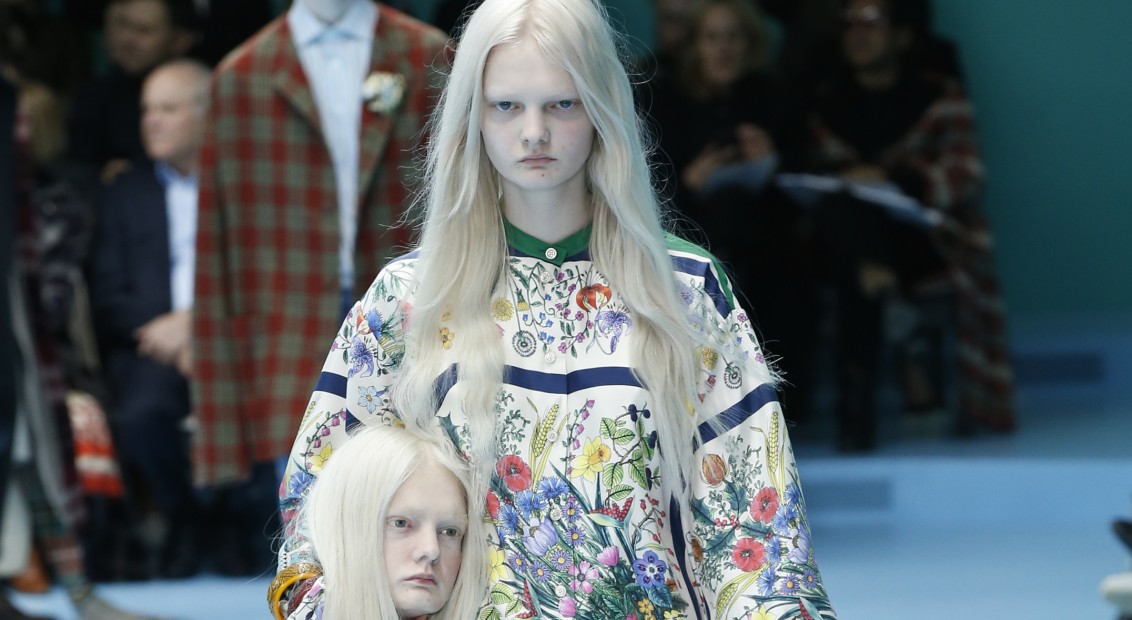 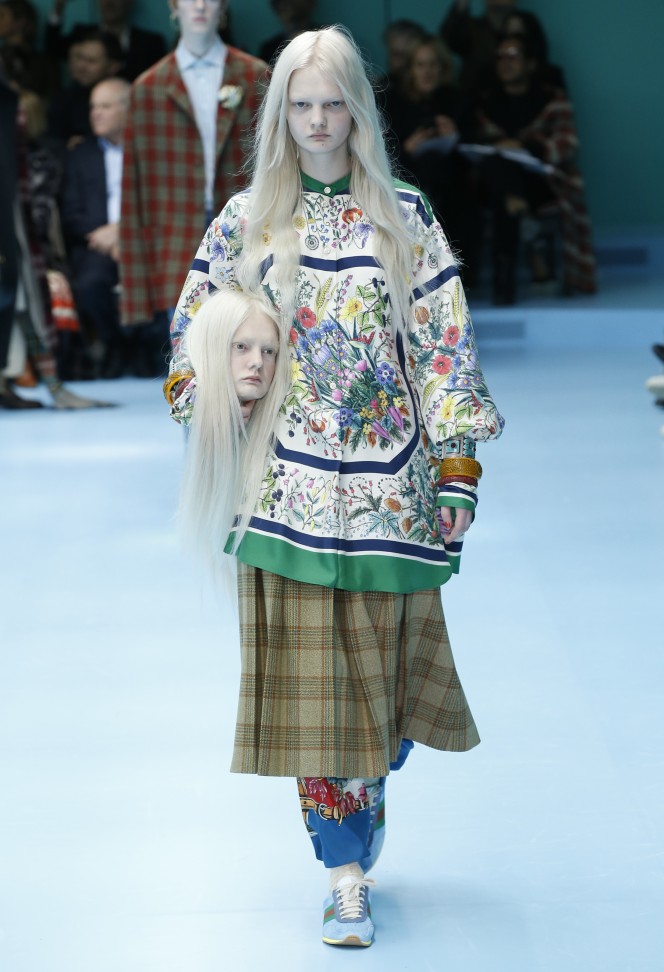 Alessandro Michele’s countdown to this season began with timer invites in red digital numbers counting down to the day of the show – there really was no excuse to be late. As for the show itself, Michele plunged his audience in a starkly-lit, turquoise surgical theatre, complete with panic bars, fire doors and the beeping of a heart monitor machine that slowly segued into Gregorian choir music (the heavenly choir? Perhaps). “The concept reflects the work of a designer. The act of cutting, splicing and reconstructing materials and fabrics to create a new personality and identity with them,” said the show notes.

‘Gucci cyborg’ was this season’s M.O., taking inspiration from Donna Haraway’s 1984 essay A Cyborg Manifesto  — a novel which breaks down the boundaries between sexes, animals and humans – it’s a source of reference that fits perfectly into Michele’s maximalist, melting pot vision.

Jackets were quilted – some with thick feathers – jewellery was piled high and tiny embroidered elephants came stitched onto mustard-coloured jumpers. Beaded jackets were worn above patterned blouses and floral trousers underneath plaid skirts, laundrette-style dustbags covered tailoring, while ruffles, turbans, full body jewels and knit-masks inspired by Japanese dance-drama theatre, Kabuki, all added to the multi-cultural, multi-world aesthetic. As the show progressed there were silk scarves with horse prints worn as head scarves and pinned with a brooch (think: Queen Lizzie at Balmoral), and brown leather bags inspired by a vintage Hattie Carnegie jewellery design.

“Gucci Cyborg is post-human: it has eyes on its hands, faun horns, dragon’s puppies and doubling heads,” read the press release. Doubling heads we hear you ask. Having previous swathed his models in all many of jewellery, this season Michele upped the accessory ante, as two models appeared carrying prosthetic replicas of their own severed heads tucked under their arms like clutch bags – that’s one way to stay (ahem) a-head of the trend. Having collaborated with Makinarium, an agency specialising in integrated special and visual effects, other models grew horns, sprouted third eyes and carried chameleons, snakes and dragons inspired by the Legend of the baby dragon in the jar – the tale of an author who staged finding a baby dragon in his garage in Oxordshire.

Slicing, splicing and dicing is Michele’s forte, and if he’s anywhere near as adapt with the surgical scissors as he is with the fabric shears, then hey, maybe he’s discovered a niche gap in the market.