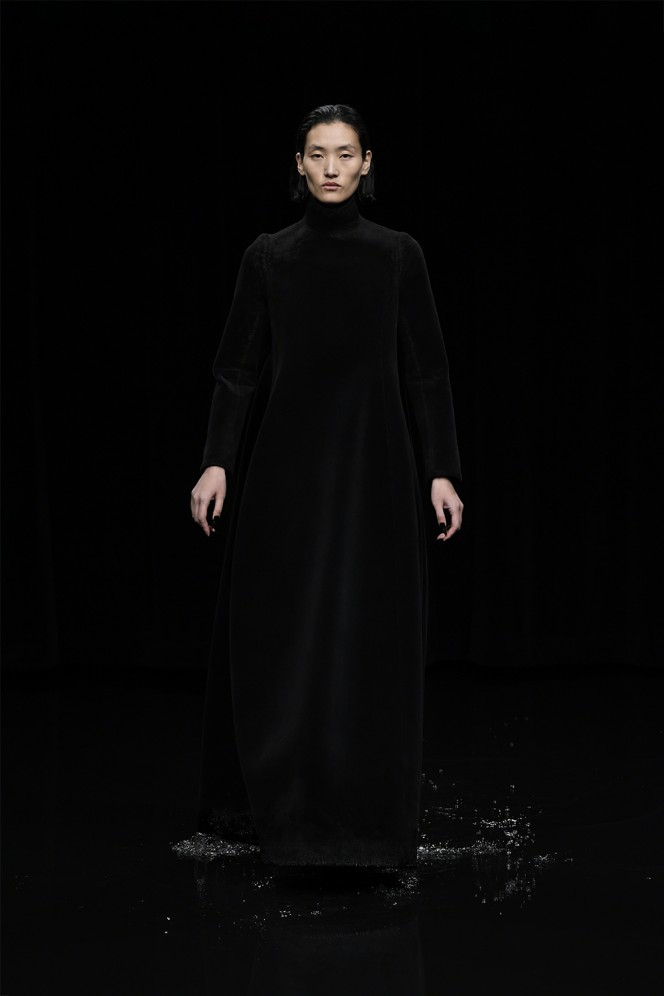 Last season, Balenciaga got political. This season, it got straight-up apocalyptic. For FW20, Demna Gvasalia flooded a Paris film studio with water (representing petrol), partially submerging the first few rows of chairs and forcing fashion’s most important names to watch the spectacle unfold at a distance – and a spectacle it was. Models splashed down the soaked runway, illuminated by a giant LED screen whose projections veered between a smoggy, red sky and flashes of extreme lightning. The soundtrack spelled out a sort of show trajectory, progressing from the dramatic swell of violins to the relentless thump of industrial techno.

As always, the designer played with the codes of ‘luxury’, too. Suits and cocktail dresses came with shoulders that jutted out into extreme points, whereas a series of football kits, motocross leathers and gym shorts – worn over black, tailored trousers, of course – continued Gvasalia’s fascination with reinterpreting casual clothes for the runway, while exploring the connection between fashion and sports fandem. The pops of colour were few and far between, nodding to the post-apocalyptic mood of the show, but the few examples were evolutions of Demna’s staples: the spandex trouser-boots with matching evening dresses, and the ditzy florals, which this season came on quilted, sculptural dresses.

The clothes themselves seemed to have little to do with the nihilistic staging, but the prevalence of technical fabrics and second-skin bodywear felt built with impending doom in mind. In other words, Balenciaga’s models know they’re living in the midst of an apocalypse – but they’re largely unbothered, and they’re dressed accordingly.