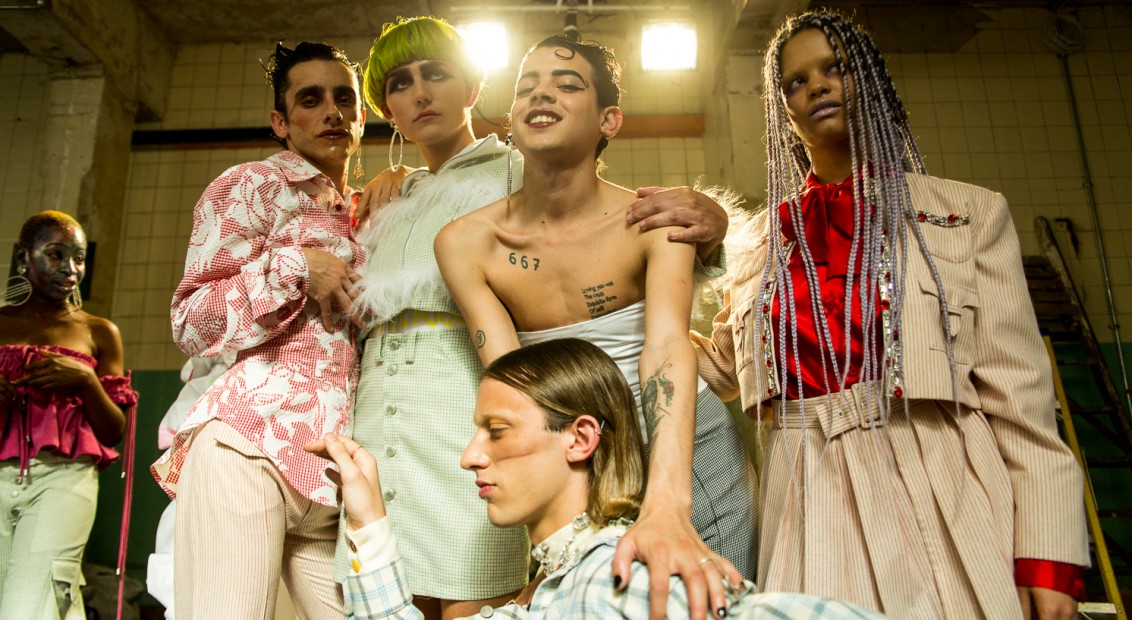 Last Thursday, Theresa May’s snap election proved a total shambles, the Conservative leader losing her majority in Parliament. With the Tories expected to win by a landslide, it was a shock result that’s being largely credited to a record turnout of young voters, with as many as two thirds backing Jeremy Corbyn’s Labour party. Tired of austerity, devastating cuts and a government that doesn’t seem to listen to the young or care for the disadvantaged, they rejected the apathetic reputation they’ve been pinned with, and blocked the Conservative landslide many polls predicted. Then, in the days following, London designers used men’s fashion week as a platform to champion the creative spirit of London youth, encouraging a deep-thinking attitude amongst our generation – one that tunes in and speaks out. Coincidence? No way.

Fashion may sometimes be viewed as fluffy, but anyone who says style and activism are mutually exclusive has been living under a rock. For an iconic example, just look to the ‘58% DON’T WANT PERSHING’ t-shirt Katherine Hamnet wore to meet Margaret Thatcher in 1984, representing public opposition to the stationing of nuclear missiles in the UK. Fast-forward to now and we may not have seen any designers wearing protest t-shirts to receptions with Theresa May, but they’re sure as hell representing during men’s fashion week. A year ago, we were staring down the barrel at the Brexit referendum, and London designers made their positions clear on the subject, from Daniel w. Fletcher’s off-schedule rally to brands wielding the word ‘IN’ through their collections, from Christopher Raeburn to E. Tautz. And last season, Christopher Shannon’s models wore his collection with protest head-pieces: shredded flags of the United Kingdom, Wales and the EU.

With an overarching celebration of youthful creativity and originality, designers pointed out the importance of thinking independently.

This season, it was a different kind of protest. With an overarching celebration of youthful creativity and originality, designers pointed out the importance of thinking independently. It’s an apt point. In an age where we’re spoon-fed easily digestible mouthfuls of information about the world, it’s easy to be info-lazy, absorbing the minimum knowledge required on a subject to flaunt an opinion on it. Adopting a standpoint on world issues is simple. Cutting through your own social media echo chamber to learn and think independently, now that’s harder. 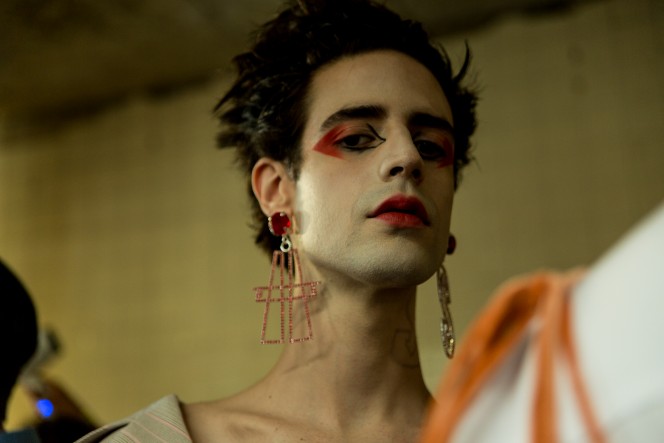 That screaming image is pretty bang on. There’s an electric kind of energy filling the UK right now, charged with a generation that’s sick of a fear-mongering media, cultural intolerance, and a small number of cashed-up elite owning most of the country’s wealth. And if last week’s record youth vote shows us anything, it’s that young people are recognising their collective power. But that energy can also manifest as a heightened creative culture, as spotlighted by Charles Jeffrey. The Glasgow-hailing designer also runs East London club night LOVERBOY, and his collections channel the positive creative energy of London’s queer community. “There’s always somewhere you can go where you can put make up on and look a certain way, which is really nice because it wasn’t always like that,” Jeffrey told us in HERO 15. “There’s a nice energy that’s happening, and you can see it in people’s work as well.” For his first stand alone runway outside of the group MAN show, Jeffrey put on a spectacular show celebrating the vibrant energy of queer hedonism. Rejecting the pseudo-politics that trends across social media, he championed a realer way of staying engaged: “It’s the right kind of extremism: dancing in the face of threats to freedom […] It’s not enough to stay woke – we need to be alive,” read the show notes, accompanying its tailored Tudor street urchins, coked up Byronic heroes, mantilla-clad Duchesses and Fulham football boys. 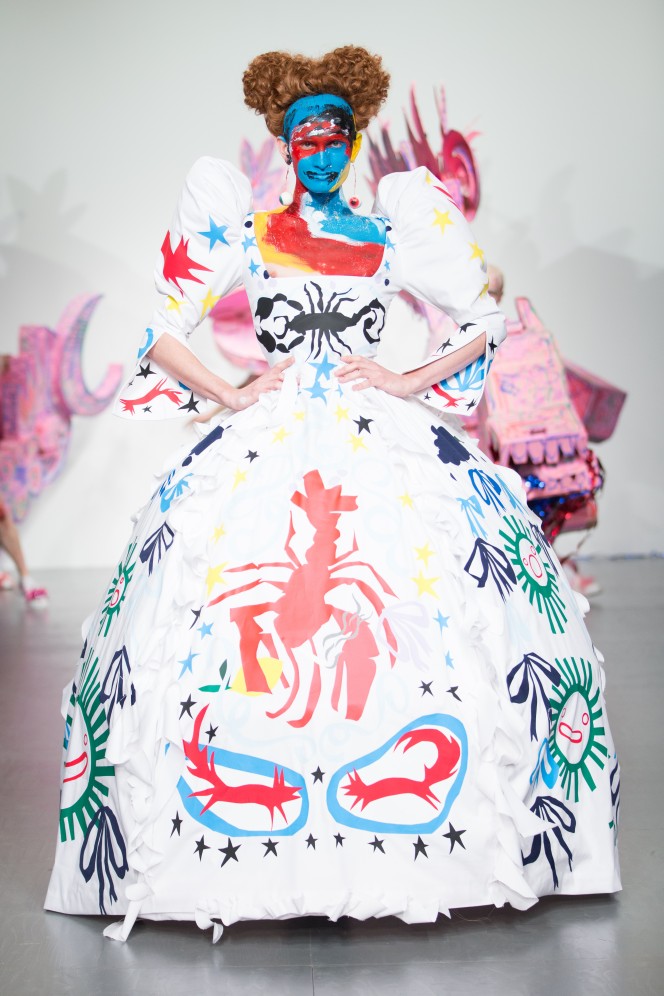 And it wasn’t just at Charles Jeffrey – with Art School, we had a similarly punchy theme: “Queer couture”. The non-binary identities of the rising brand’s two designers are inseparable from its core DNA, and so for their SS18 show (their second as part of MAN) they envisioned the runway as a utopia – a “space of theatre, friendship, rebellion, expression and fantasy,” celebrating the love inherent in collaboration, creativity and universal acceptance. Unbridled creativity is often the core of the MAN show, but here it was more potent than ever, and not just with Art School: Per Götesson continued his exploration of queer sexuality via an innovative take on denim construction, and Rottingdean Bazaar appropriated their East Sussex toolshed to rework hammers, scissors and pasta in perverse ways. 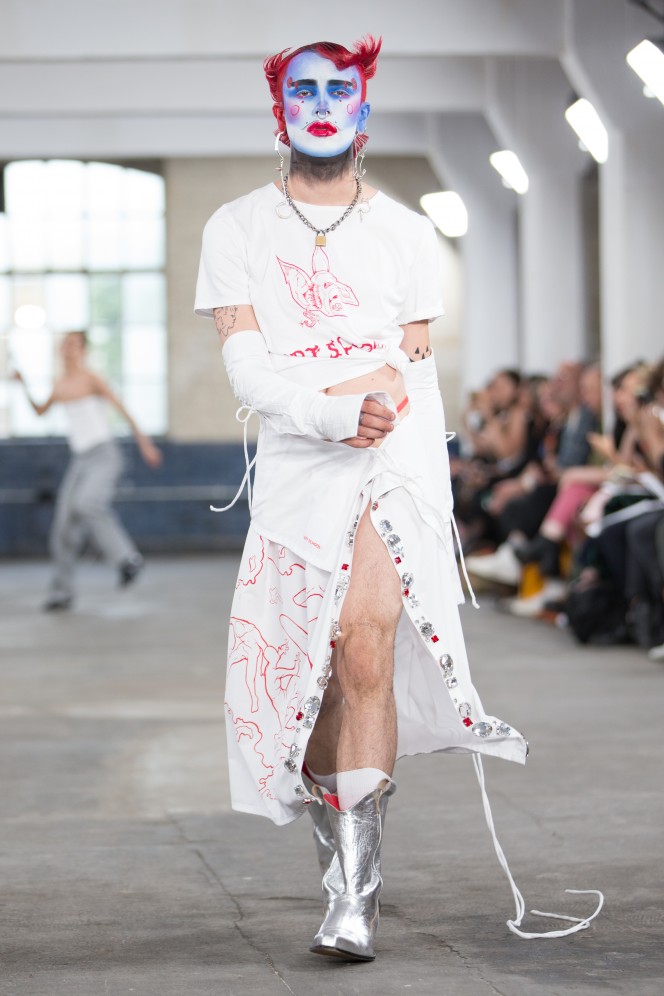 Vivienne Westwood showed up big time on the final day, putting on a circus act for her second show back in London after a ten-year hiatus showing in Milan. Titled, ‘We are Motherfucker’, the collection was inspired by the fucked up state of recent world affairs (let’s be honest – in the past twelve months we’ve not only had Donald Trump become president of the United States but rep a Muslin Ban and pull the US out of the Paris Accord). Models were joined by a contorting group of dancers and circus performers, soundtracked by a spoken word commentary that riffed on the dream of a future with Jeremy Corbyn. (He wasn’t only on the Dame’s mind – Martine Rose was inspired by the Labour leader’s cycling garb, a photo of him donning his internet-famous activewear featuring on her show invitation). 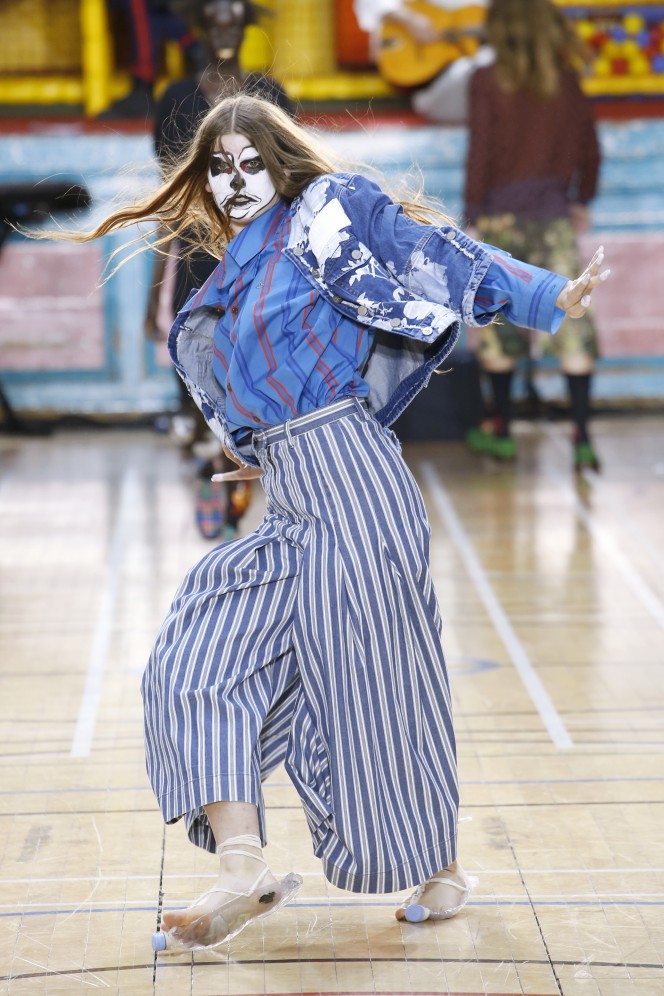 We’ve been hearing a lot about how thin the London Fashion Week Men’s schedule is looking, and yes it’s lost the bigger guns like Burberry and Coach to co-ed show formats. But in reality, those name-checks aren’t what have made this city become known as a hotbed for exciting fashion talent. It’s the Charles Jeffreys, the Art Schools, the Liam Hodges, the fresh graduates of colleges like the RCA. These bright young things are deeply tuned into the problems facing our generation (they live it), and they confront them head on with their creative output. They reject the apathetic cliche young people have been tagged with and call for their peers to do the same: by shouting out, by voting, by protesting, by creating, by thinking independently. If we all took a cue from this outlook, imagine the change we could make.

Stay tuned to all our fashion week coverage, from London to Milan, Paris and New York.