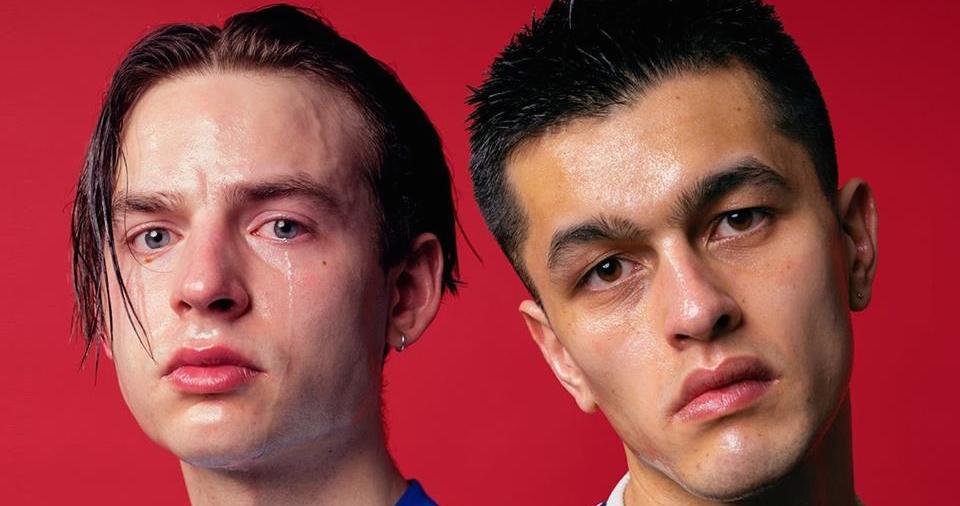 A Prayer for the Unemployed

A Prayer for the Unemployed

Turn your ears towards Denmark, something is bubbling. The Scandinavian country may be more known for its design credentials than for its musical contributions, however a new wave of musicians are proving that Denmark as a hotbed of exciting new talent. Stretching a broad range of genres and sounds, COPENHAGEN RISING is our portfolio of those musicians standing at the vanguard of Denmark’s rising scene. Next up? Copenhagen-based duo First Hate.

Music wasn’t a teenage dream for Anton Falck Gansted and Joakim Nørgaard, but after playing around with music technology like GarageBand, the friends united under their moniker First Hate and found the perfect outlet for their creativity.

“I made up this secret language as a teenager, like an alphabet, to write my diary in so nobody could ever find it and read it,” Gansted reminisces below. “But it’s this mix of wanting to keep everything a secret, and then having this deep urge for somebody to find my diary and spread it all over the world and make everybody read it.” These contrasting impulses are reflected in the duo’s music. Whilst intimate and crafted with their most personal feelings, the resulting tracks are the ultimate pop bangers, both accessible and irresistible.

Part of a fabric building the underground scene in Copenhagen, the duo self-produced their debut album, A Prayer for the Unemployed, guided by Troels Damgaard Holm and Lust for Youth’s Malthe Fischer – a band First Hate has toured with, as well as the likes of Communions and Iceage. And it’s this camaraderie that makes the scene so special, the duo even book their friends as DJs to their gigs abroad so they can get their flights covered.

Although of specific meaning to them, the duo ask the listener to become emotively involved with their music. Their album is an invite to the world, city, space they’ve created and get so lost in.

Clementine: Your album is called A Prayer for the Unemployed. Is the title a stand-alone statement or a reflection of the album as a whole?
Anton Falck Gansted: It was just a sentence that we liked which came from a prayer sheet one of our friend’s stole from a church as a teenager. The whole thing about being employed, unemployed – this word ‘employed’ – is like, “what does it mean?” And it doesn’t have to be in a physical sense, it can be in so many senses. It was maybe like a prayer for the people that don’t feel part of the system that they’re born into and that they can’t really escape. Maybe it’s just a prayer for the times we’re in right now.
Joakim Nørgaard: I think it’s a prayer for every person trying.

Clementine: Have you ever felt that way?
Anton: I’ve never really done any real education since primary school, and I don’t really feel like I fitted into that ‘thing’, like everyone becomes this weird worker bee, and for me to be able to do something different is such a blessing, and of course we can’t all be hairdressers or artists. It could be in a personal sense as well, feeling outside amongst social structures and groups of people, or about this lonely person who feels comfortable not being part of something.

Clementine: I had a look on your Instagram and there’s a video of what looks like Jell-O moulds of your faces? Is that the album cover?
Joakim: Yes!
Anton: When I was a kid, my Dad moulded my face. He works in a Kindergarten, so he does creative stuff with kids. I have a mould of his face when he was my age hanging on the wall, and I thought it was funny, so we did casts of our faces and moulded them with gelatine and photographed them. 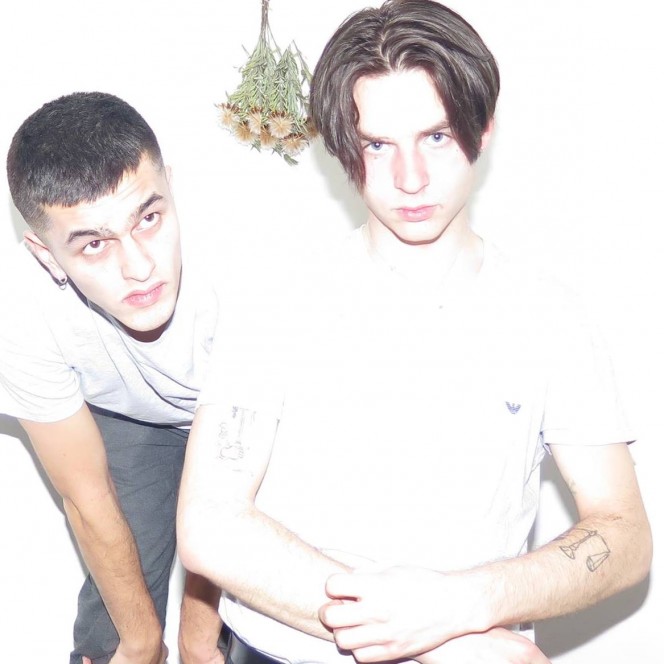 Clementine: This was a couple of years ago now, but you made all of the props yourselves in your video for Warsawa. Is any of that merch on your website?
Joakim: No, but it’s a good thing you asked…
Anton: We’re going to, we’re just waiting for the right moment. Everything is in storage at Joakim’s loft, so you will be able to buy some of the stuff pretty soon.
Joakim: It’s a very special thing to sell a person as a brand.
Anton: Even more special when the person is yourself…
[both laugh]
Anton: We had this funny idea of making bed sheets with ourselves on them and then to sleep in them.

Clementine: That video surrounded the concept of life on earth and the afterlife?
Anton: Yeah, of course there is symbolism and those still-life paintings, that was the inspiration, and also what we leave on earth when we leave – the posters and the photographs and the erasers – those things will all still be there. Hopefully.

Clementine: You guys seem quite philosophical. Where do these ideas come from?
Anton: I think we spend a lot of time talking to each other, philosophising? Is that the word?
Joakim: Thinking about stuff [laughs].
Anton: Discussing the world we live in together, that came before the band, pretty much.
Joakim: But we’re not trying to impose certain messages on people; it’s more like a synchronicity with people, and having other people philosophising.
Anton: It’s all a matter of asking questions rather than answering them. 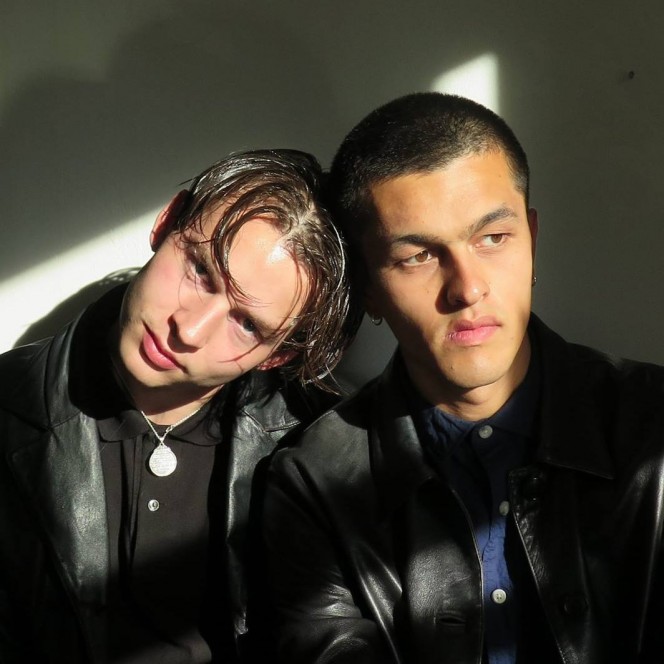 Clementine: In terms of your upbringing, was music always a big part of your lives?
Anton: My parents would sing to me at night. You [Joakim] had some mixtapes and stuff, but none of us really have a music education, not really.
Joakim: When I was a child I used music a lot to go through emotions and stuff like that.
Anton: But I think it came as a shock to us to find ourselves being in a band, like it wasn’t something that we planned or thought that would happen.

Clementine: What do you find are the most common triggers that make you feel compelled to write a song?
Anton: I think for me, I have this urge… like I made up this secret language as a teenager, like an alphabet, to write my diary in so nobody could ever find it and read it, but it’s this mix of wanting to keep everything a secret, and then having this deep urge for somebody to find my diary and spread it all over the world and make everybody read it. There’s this weird loneliness about having something inside you that you can’t keep anymore and you have to tell someone, but you also can’t tell it the way it is, so you have to write a song about it and put it in images and pictures so people can somehow map it out.
Joakim: I think that’s very well put, in my case as well.

Clementine: You guys didn’t start making music with instruments…
Anton: We don’t know how to play shit, to be honest [laughs]. We started with GarageBand, recording directly into the computer with the computer microphone.
Joakim: But now we have Logic. I think there’s a huge difference between making music and playing music. Sometimes, it can be very different to play and act on something, than to create and come up with something.
Anton: In the beginning we were just playing around, and now at some point you have to try and learn stuff, to look at what other people do and pick up on some of their tricks and steal methods and try them out and see how you can use them for your own sake.

“…for the album, we asked a lot of people to record bits and pieces of their daily life, like people who had inflicted us during the album, like my cat, or my neighbour’s footsteps, just recording the sounds around us at the time…”

Clementine: You have a song called Copenhagen, is it about the place itself or more personal?
Anton: I think for me the soundscape sounded like a night out in the city. I think I had a movie scene rolling in my head, and I had this idea of this couple breaking up outside of a club late at night, and you kind of hear the distant shouts of drunken people and cars. The sun is about to rise and it’s about five in the morning and you have this walk alone home through the city all by yourself, and you kind of own the city, even though you’re all alone, and this is the soundtrack you’re listening to.

“I think there’s a huge difference between making music and playing music. Sometimes, it can be very different to play and act on something, than to create and come up with something.”

Clementine: Denmark seems to be a real creative hub. Does a sense of community fuel you creatively?
Anton: We have a studio in this artistic warehouse full of friends and other artists, and there are a lot of people coming in and out, which is super important and nice and creates something special. Also, for the album, we asked a lot of people to record bits and pieces of their daily life, like people who had inflicted us during the album, like my cat, or my neighbour’s footsteps, just recording the sounds around us at the time, put everyone we love in tiny pieces on the record, mostly for our own sake so we can hear them on the thing.

First Hate: A Prayer for the Unemployed is available to buy here.